First drive Mercedes-Benz SL400 R231 2015 – base player. At just over £70,000, the V6 bitubo powered SL has serious competition in the market. The magic of turbochargers means the three-litre V6 powered SL400 is faster than the 3.5-litre, naturally aspirated SL350 it replaces, and forces you to rethink your idea of an entry level roadster.  I didn’t expect such tingling vocals from a turbocharged six.

I don’t think I was the only one who mourned the passing of the SL350, replaced in the second quarter of 2014 by this SL400. The old car’s naturally aspirated V6 whooped and snarled like a demon football fan, completely overshadowing the SL500’s V8 biturbo for sheer theatre. AMGs aside, the V6 was my pick of the R231 range, even before the £10,000 saving over the not-much-faster V8 model was taken into account. 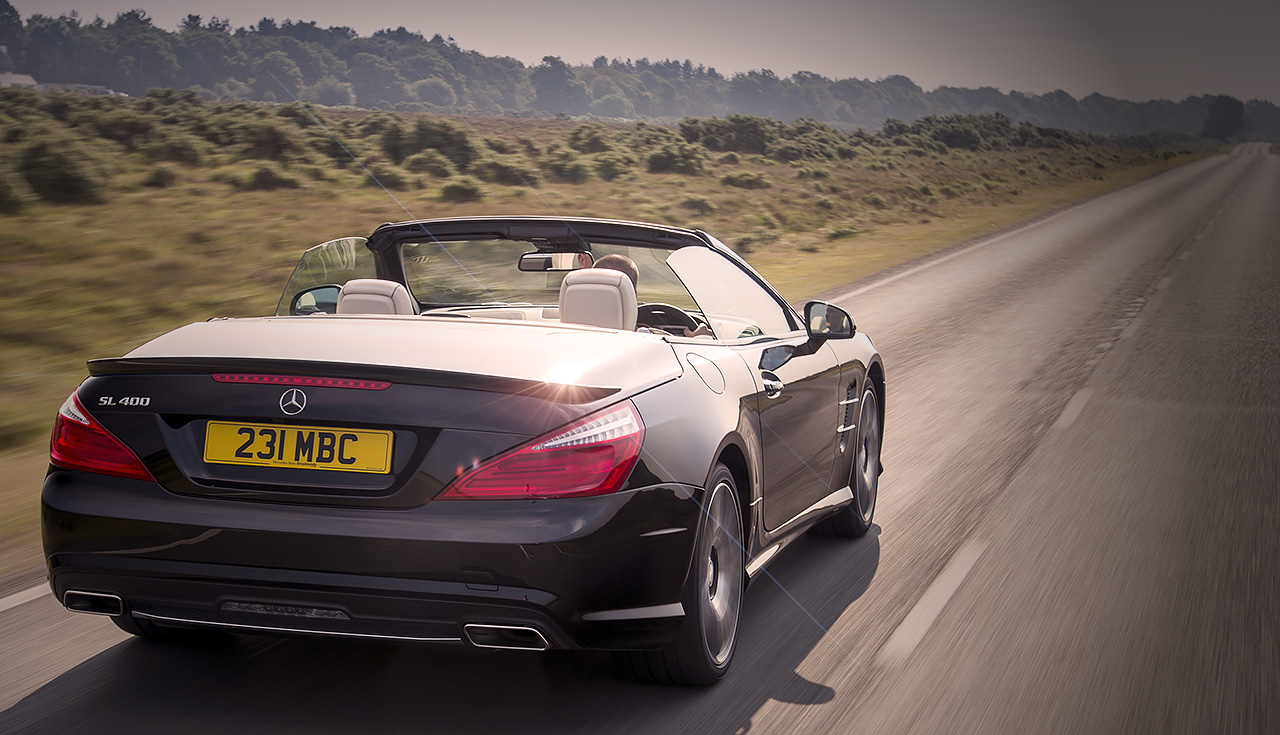 The SL400 retains the 350’s M276 V6, but the capacity has shrunk from 3.5 litres to 3.0 litres. Those thinking Mercedes has suddenly gone soft will be relieved to hear the V6 in the SL400 also has two IHI turbochargers, rectifying any loss of performance brought about by that engine capacity decrease. Thus equipped, power is raised from 302bhp to 328bhp, and torque from 273lb ft to 354lb ft – the latter jump an increase of 30 per cent and cutting the 0-62mph time by a noteworthy seven tenths to 5.2 seconds.

Unsurprisingly, the slight fall in fuel economy, from 39.2mpg to 36.7mpg (NEDC combined), and increase in CO2 emissions, from 169g/km to 178g/km, go without mention in the press release, but the SL400 R231 remains a sports car with a conscience.

Officially, it is capable of 27.7mpg around town and 45.6mpg on faster roads, not bad for a two-seat roadster weighing 1,730kg and packing a 364- to 504-litre boot cavity within its ample rump.

As with the SL350, the SL400 is only available in AMG Sport spec and it comes with a sticker price of £72,500 OTR, around £2,500 more than what Mercedes-Benz UK charged for the SL350 in April 2014 shortly before it was shown the door. For that outlay you get AMG body styling, 19-inch AMG wheels with 255/35 front and 285/30 rear tyres, plus lowered sports suspension with stiffened dampers, sports seats with perforated leather, a panoramic glass insert for the vario-roof, and parking sensors.

As standard, the SL400 also boasts designo Platinum White Pearl piping on the door armrests, centre console, seat side bolsters and headrests. Not forgetting Comand Online with Bluetooth connectivity, Mercedes’ Intelligent Light System with bi-xenon headlamps, metallic paint, and a plethora of airbags and safety systems designed to keep you alive in the event of a crash. 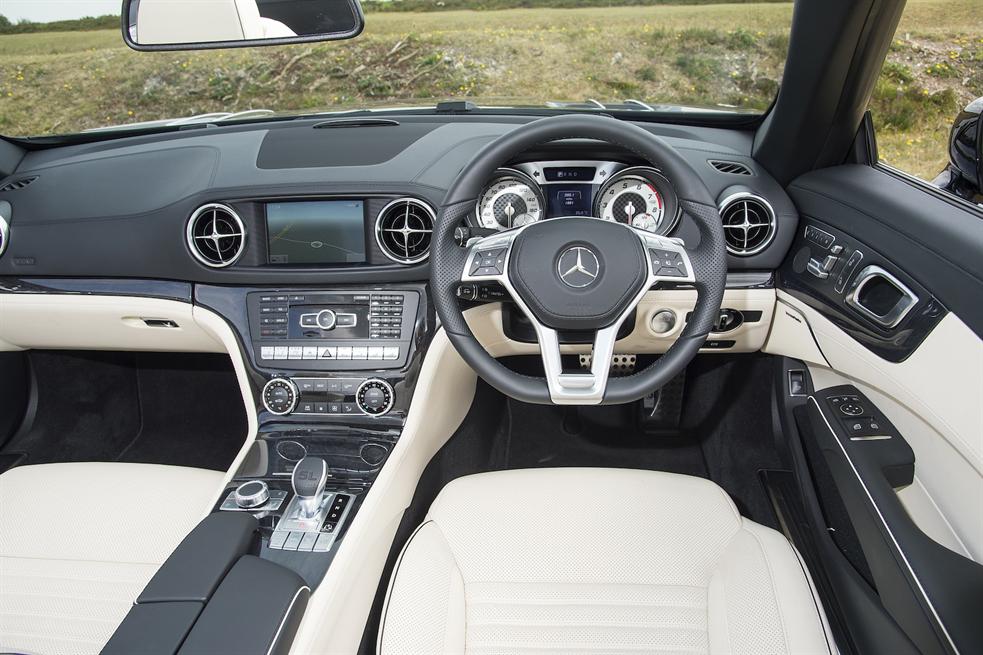 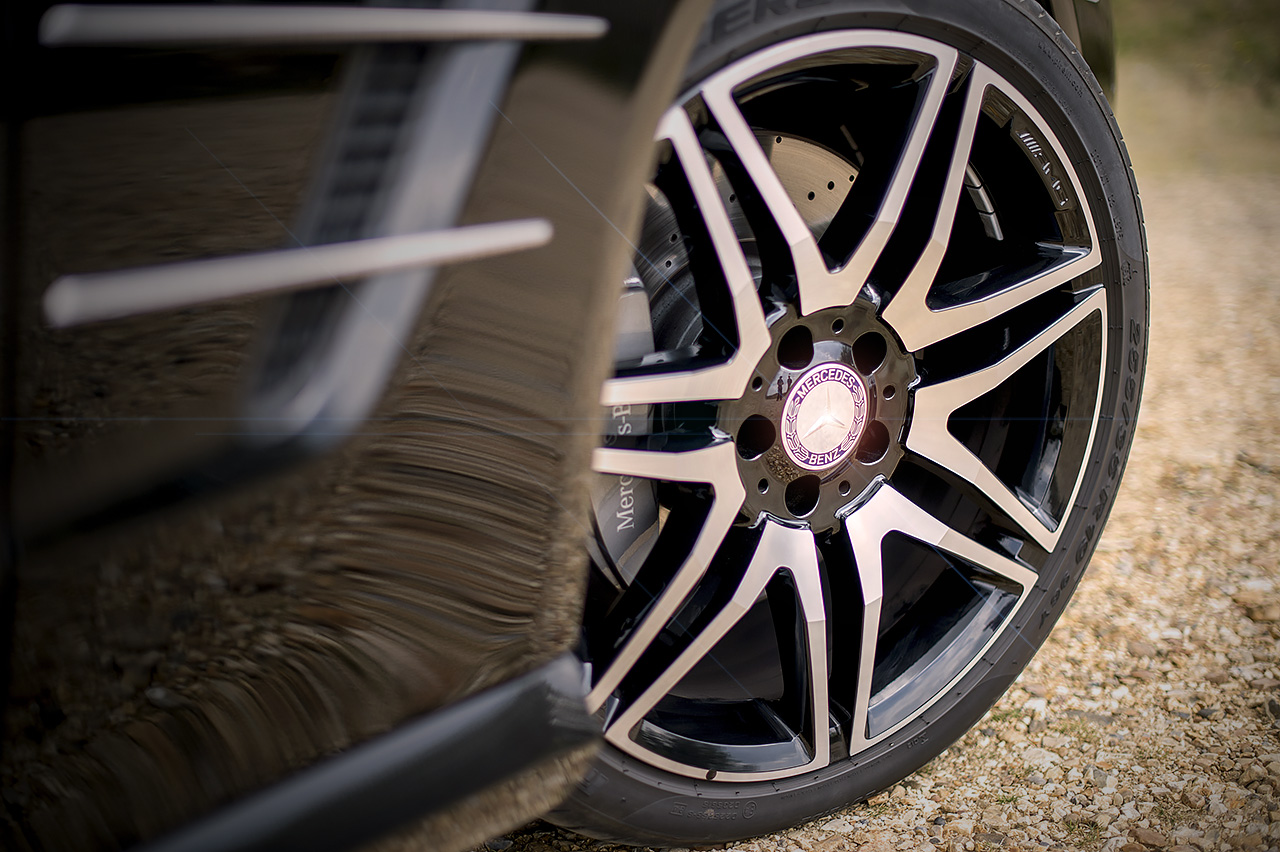 Expensive it may be, but this Obsidian Black roadster has the sculpted, aggressive looks and badge appeal to back it up. And as you fire the V6 biturbo from cold, the gargling rip-roar spewed from the twin exhausts instantly purse the lips of all those within earshot. I didn’t expect such tingling vocals from a turbocharged six, and suddenly the passing of the SL350 doesn’t seem so bad after all.

On the road, the SL400 continues to do good things for one’s recovery, the ABC suspension firm yet forgiving like memory foam, and that V6 under the aluminium bonnet sounding like a flute playing Wookiee, the soothing, low down warbling giving way to a sharp edged and complex six-cylinder symphony by 4,000rpm, mid way through the maximum torque curve and on the brink of full power deployment.

The SL500 delivers a kidney bursting punch from almost no revs, but refuses to let a roar escape from its jaws. The SL400 feels less kamikaze once fully lit, yet its lesser urge allows greater appreciation of the speed that is building, particularly with such an invigorating noise emanating from behind your head. A throttle blip function for the 7G-Tronic Plus automatic is the only thing missing in this otherwise satisfyingly engaging roadster.

Highly comfortable with the roof up or down, and quick footed despite its considerable size, the V6 biturbo powered SL400 makes the entry point to the R231 SL range even more appealing.

The fantastic vario-roof can be opened or closed in less than 20 seconds, says Benz.