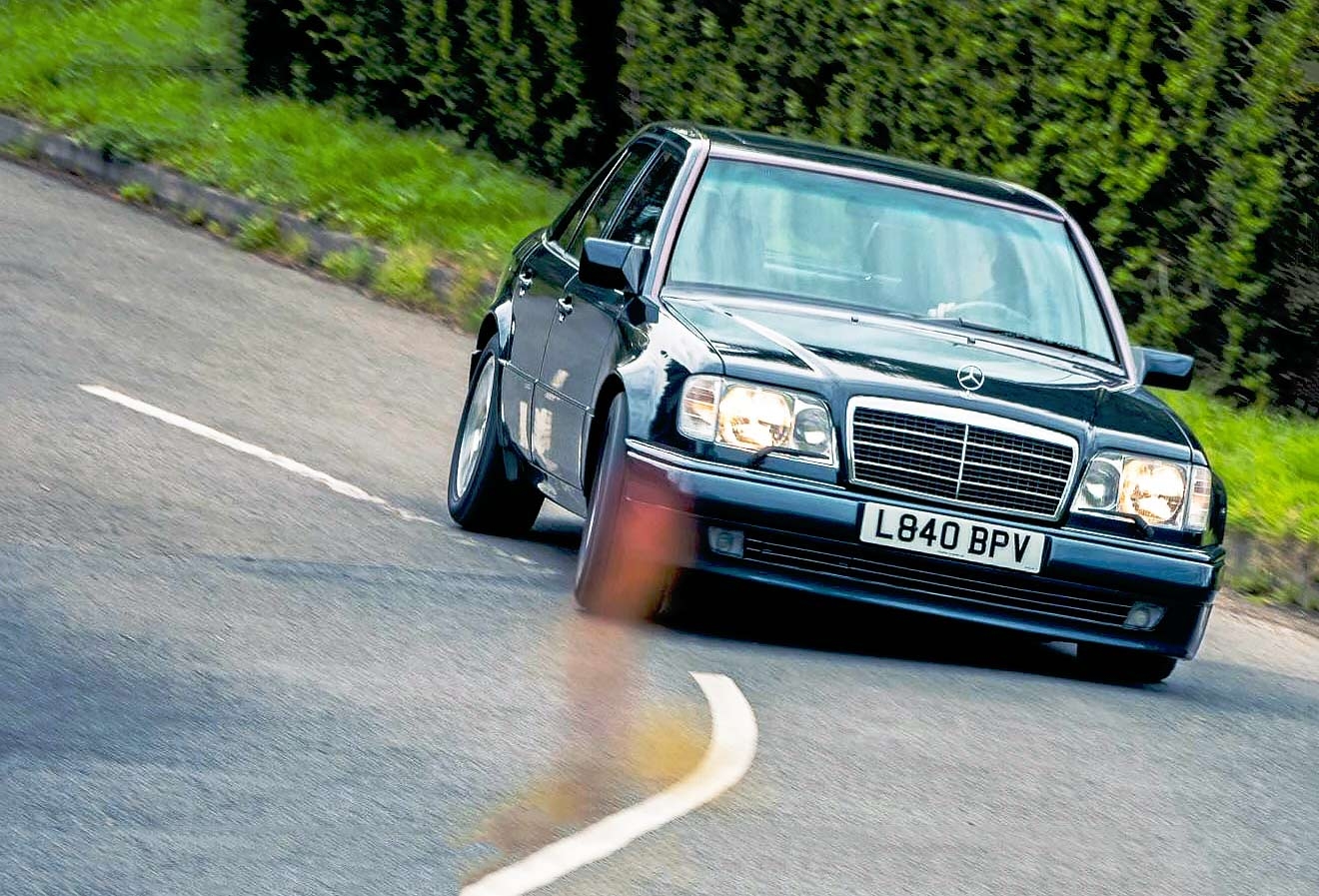 What ingredients would go into the perfect recipe for a late 20th century supersaloon? If we’re talking about a hearty Sunday roast, the Mercedes-Benz W124 would be a shoe-in choice for the meat. Among the great four-doors of the ’80s and ’90s, only the BMW E39 came close. The next most important ingredient would be the chef. For Mercedes, Porsche was the obvious celebrity choice to help create the 322bhp 5.0-litre V8 E500/500E W124 super-saloon. Out-accelerating Ferrari’s 328 and out-autobahning BMW’s M5 E34, the E500 rightly passed into legend.

But chefs are proud people, and Mercedes had their own: AMG. They reckoned they could make an even tastier dish than the E500. The result was the ultra-rare E60.

It looks stunning – but did AMG’s cooking style upset the delicious flavours of the original recipe? Time to get the posh cutlery out and tuck in.

‘When you aim for perfection, you discover it’s a moving target,’ said US law academic George Fisher. Moving your eyes from the E60’s rapidly advancing speedo needle to the gunsight – sorry, three-pointed star – on its nose, it’s hard not to agree.

The Mercedes-Benz E60 took the E500/500E’s fearsome reputation and added more of everything: power, torque, visual aggression, speed – and money.

Each Type 2758 (as it was known at Porsche) took 18 days to hand-build. It was a truly bespoke car. But even as the press snappers blazed away in Paris, AMG’s engineers were signing off an upgraded 6.0-litre version of the E500’s engine. Pumping out either 374bhp or 402bhp, the big AMG motor dropped the 0-60 time to the mid-four second bracket, unheard-of performance in a 1992 four-door saloon.

There was a need for the ultimate E-Class to up its game as the 3.8-litre M5 E34 had more than 340bhp, while Alpina’s B10 BiTurbo had 360bhp and the Lotus Carlton 377bhp. Talk of a V12 E-Class came to nothing as weight and packaging issues made the business case too difficult. Instead, AMG built on its eight-cylinder conversion nous to build the E60 Limited.

Using the E500’s M119 V8 as its base, the bore grew from 96.5mm to 100mm and the stroke rose from85mmto 94.8mm. AMG reprofiled the camshafts, fitted lightweight pistons and reprogrammed the Bosch fuel-injection system. The trustworthy four-speed automatic got closer gear ratios and a lower final drive for keener acceleration. The result? 5.4 seconds to 60mph, with 120mph turning up around 15 seconds later.

Only you wouldn’t really think that just by looking at it. True, those gorgeous 17in alloys purloined from the W201 190E Evo II might give you some clue, as might the subtle bodykit and lower ride height. The E60 effortlessly pulls off that ’90s-era Merc mix of discretion and aggression, especially in this car’s blue-black metallic. Inside, only the patterned seat facings tell you that this isn’t just a lowered W124 in street-fighter makeup. The V8 has a deeper rumble, but it’s still far removed from the NASCAR bark of modern AMGs. Beating BMW’s M Department wouldn’t be on the agenda for at least a decade. Ultimately, the E60 still had to be a Mercedes-Benz. Step into it straight after a post-2005 AMG and you’ll be amazed at how old-school the E60 is.

Especially in the steering. Though AMG stiffened up the suspension and fitted low-profile tyres, the recirculating ball system still takes three turns between locks. It’s chunkier than the fingertip-light feel of regular Mercs, but light years away from the pliability of a BMW or Alpina.

But then the hot Munich metal wouldn’t ride as well as the E60. In true Mercedes style it floats down the road; you can barely feel the cat’s eyes as you move out to blast past another dawdler on the motorway. It’s less happy on B-roads – try to imagine sitting in the centre of a bouncy castle at its busiest period. If you do decide to show the E60 some bends, don’t have a heavy lunch beforehand. Too much aggression unsettles body control alarmingly, and the slippery leather seats will do little to stop you slithering into the passenger footwell if you’re not careful. This is very much a slow in, slow out kind of car.

If you’re expecting the kind of wild tail slides that more modern AMGs seem to specialise in, prepare for a disappointment. The E60’s default mode is understeer; trying to provoke the rear into action just fires up the authoritarian Automatic Slip Reduction traction control system. You can’t switch it off, and it’ll keep the rear firmly planted however hard you might try. But why would you want to hoon about? If you wanted a sports saloon to thrash around in, you’d have gone to BMW or Alpina. What the E60 does best is rampaging, unrelenting acceleration. The E60 turns the future into now. Unleashing this performance potential should feel more heavyweight than simply pushing a small plastic switch, but with ‘S’ mode engaged, it’s time to play.

Plant your right foot into the long-travel pedal and there’s a brief pause as the gearbox kicks down. It’s almost as if the E60 wants to be sure of your intent before deploying its arsenal. You’re quickly past 3000rpm, at which point you wave goodbye to quiet sobriety as the V8 wakes up with a snarl, the rev counter ploughing around the dial, egged on by an ever-angrier growl as the E60 vaults past ever bigger numbers on the speedo. Another ratio appears. It’s at this point I’m glad were on an airfield – if I was on the road now I’d be frantically searching the horizon for cameras, but here, that sound becomes a baritone gargle as the E60 claws for the next gear. We’re well into three figures now and it’s still pulling, the M119 eight-pot hitting full voice as the world becomes italicised. Yet there’s more, just a linear pull towards the horizon as the game of chicken goes on between your right foot and the E60’s voracious appetite for speed.

I blink first and ease on to the brakes. Thankfully they’re upgraded 320mm ventilated discs sourced from the SL600 R129, and they’ve plenty of feel too. Every single nerve is twitching for another go; my eyes are wide and begging for bigger speedo numbers. It feels like there isn’t enough tarmac to contain this car.

The E60 is limited to 155mph but derestricted examples have been known to nudge 180mph, three more than the Lotus Carlton. Irrelevant in the real world, sure, but I’ve little doubt that it could reach that figure. It’s a full-bore adrenalin hit, and all the more addictive for it.

On performance per pound, probably not. But there’s so much more to this car than just numbers. It’s a true end-of-an-era car, one of the last of the ‘proper’ AMG saloons blending true exclusivity, solidity, comfort, and supercar acceleration with the chiselled looks of Merc’s golden era. It’s rare too: fewer than 150 were made.

By the time E60 production wrapped up in 1995, AMG was already integrating its DNA into higher-volume Mercedes-Benz saloons. Rare-groove AMGs in the E60’s vein became restricted to 12-cylinder SLs and the CLK GTR supercar. The E60 did return in 1996 on the W210 E-Class, but it was slower than the W124 and built in far greater numbers.

The W124 E60 is an undisputed modern classic fully deserving its lofty pricetag. It may not be absolute perfection behind the wheel, but it’s pretty damn close.

‘IF YOU DO DECIDE TO SHOW THE E60 W124 SOME BENDS, DON’T HAVE A HEAVY LUNCH BEFORE HAND’

E60 speedo needle goes right round. From a time when stalks were stalks.

Try to find these seats at the scrappers.

Nathan holds on tight as V8 is let loose.

Body roll is pronounced. As you can see..

Thanks to Charles Iron side for the loan of the car (charlesironside.co.uk).