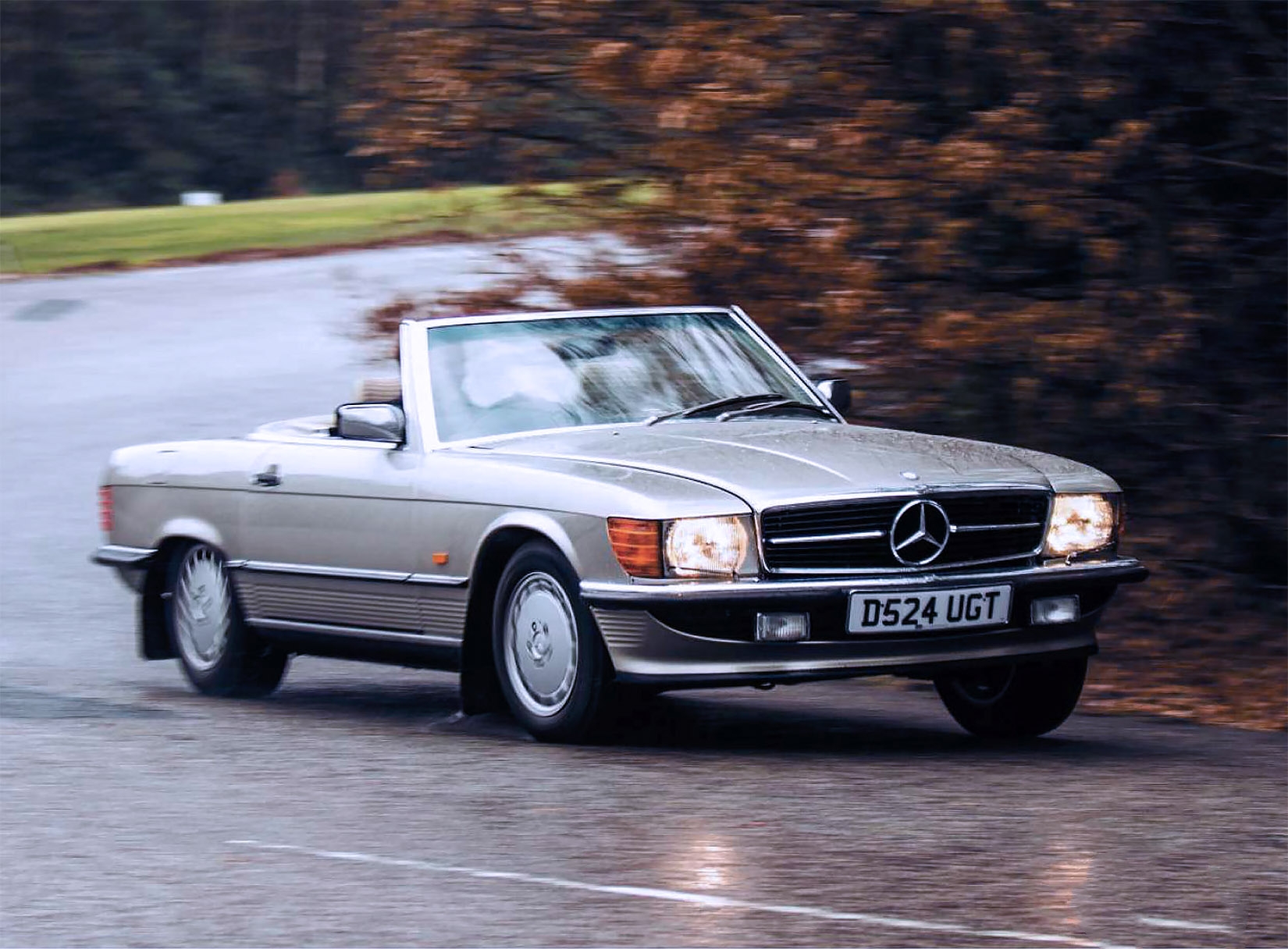 Mercedes-Benz 500SL R107 test-drive. Suddenly, where you were going is now where you are. Nathan Chadwick, sub editor.

The Mercedes R107 has never just been a car. That sharp snout isn’t just the front, it’s the chiselled jaw of a Hollywood leading man, and those swept-back indicators are the bewitching, twinkling eyes of a Fifties pin-up. The SL is a doorway to a better world – and one that should be accessed now. Especially so in the most decadent, most exclusive form first sold in the UK – the 500 SL.

Unlike movie starlets, the SL isn’t a diva. Most of the time it’s happy to trundle around, barely above 2000rpm. There’s enough torque that even overtaking can be done in a solemn, respectable manner. However, when I shove my right foot into the carpet, the SL reveals its true nature. After a brief pause as the gearbox kicks down, there’s a strident metallic snarl. Suddenly, where you were going is now where you are: the 40mph to 60mph dash takes just 3.4 seconds, 50mph to 70mph a mere 4.1 seconds. 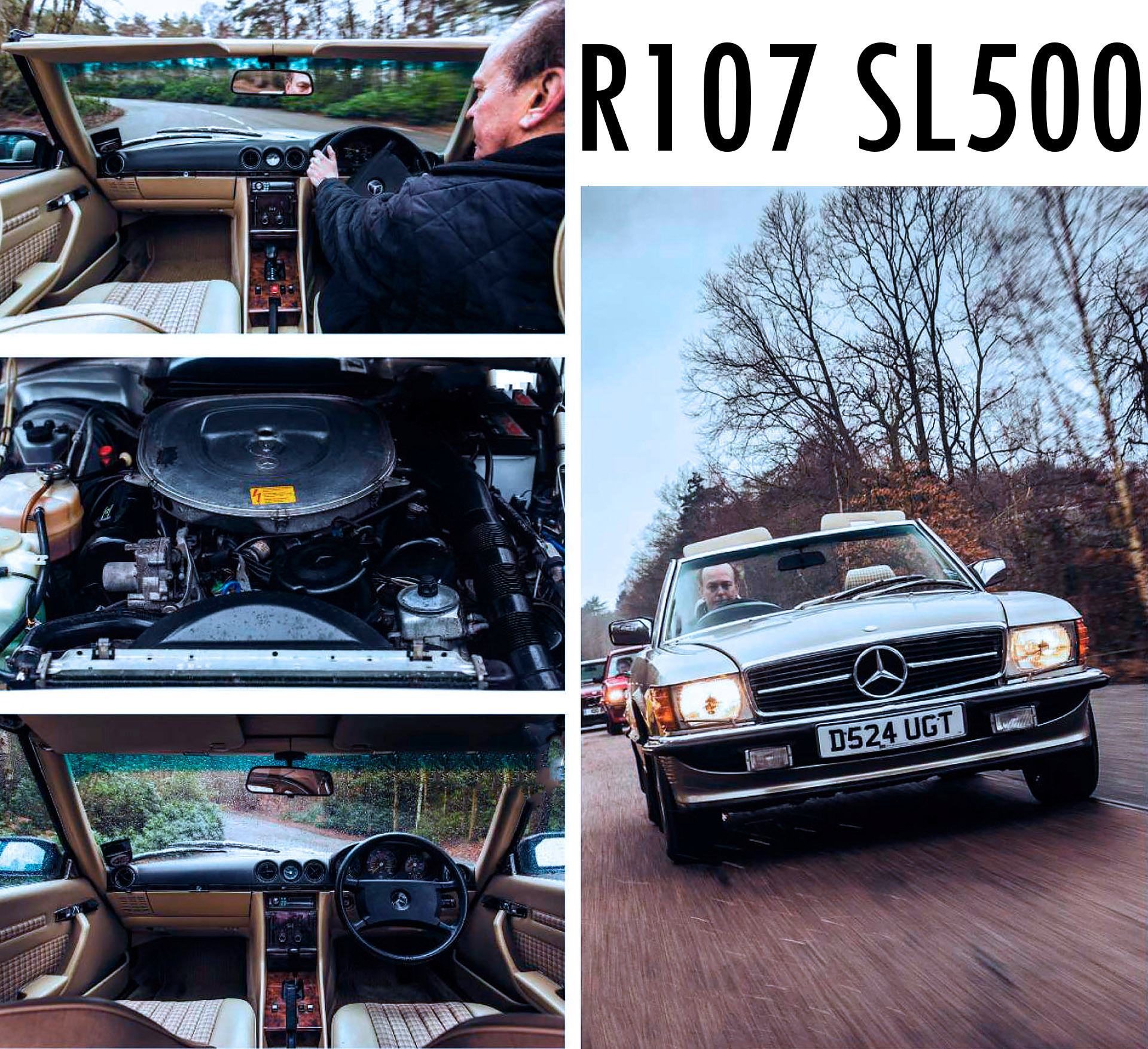 It handles, too – the SL corners directly and predictably, enough to raise a grin. The ride is firmer than I expected, crashing over some sinkhole-sized potholes. This a post-1986 car; pre-1986 R107s are much more softly sprung.

Everything feels sturdy and unlikely to fall off. Not a drop of rain troubles the interior – few 26-year-old convertibles can claim that. It just feels right- in the SL, I feel as if Europe could be my personal

VIP playground, a notion enhanced by the interior. The luxury isn’t ostentatious – everything is crisply finished in the clipped, acute manner of a Dupont lighter. I can see the SL swallowing entire countries quite comfortably on the way to Portofino or Biarritz.

And such adventures are an attainable dream – for now. While R107s may seem plentiful today, it won’t stay that way. Common corrosion traps such as the wheelarches and sills may be obvious to spot, but by the time rust creeps unseen into the bulkhead the cost of restoration can cause many owners to give in. If it turns out bulkhead repair is needed, The SL Shop can do this without removing the engine; prices range from £1k to £3k. Over time, SLs will slide out of view – pushing the prices of good examples higher.

The SL Shop’s Sam Bailey can already see it happening. ‘I could sell six top cars right now if I could find them; it’s simply supply and demand. The R107’s appeal transcends the classic market, too, as folks old and young, male or female, classic car enthusiasts or casual appreciators, all love the R107 – it’s very aspirational. You could buy a semi-detached house for the price of one when new.’

And don’t think that to enjoy one means acquiring a collection of petrol station loyalty cards – keep it below 2000rpm and you’ll get mid-20s mpg. This helps to explain the breadth of the SL’s appeal; according to Sam R107s are bought on colour and condition, rather than engine size. The V8’s such an unstressed engine, real-world fuel consumption is barely any different to the six-cylinders. For long-distance touring, the V8’s the one to have.’

The market favours post-1986 cars because of their firmer ride, but Sam prefers the early cars. They’re smoother and more classic-feeling.’ Good pre-1986 cars start at £12k while later R107s start at £15k. Truly exceptional examples can stretch the budget further – mint low-milers can be £27k or more.

When buying, Terry Langford, Mercedes guru at Drive-My, advises, ‘Check for regular oil changes in the service history, as early 5.0-litres suffer from oil starvation to the camshafts.’ The giveaway is a tappety noise. You should walk away from any hood problems, given that it’s £800 to replace the canvas roof. ‘Also listen for clonking in the gearbox – a refurbished unit is about £1500,’ he adds. However, Sam points out that of the 400 or more R107s he’s sold, just one has needed a refurbished ’box under warranty.

He also urges care with the timing chain. When doing a more forensic inspection of the car, ‘Check the guides and if they need replacing, do so – it’s not expensive,’ he says. But if it has stretched too far, having a new timing chain fitted is £200 to £300.

Those glinting chrome trim pieces are where the scary bills lie – factor in £280 for new bumper corners alone, plus £90 for the often rotten girder underneath.

These costs may be cause for trepidation, but as I slip into Drive, ease back into the seats and head out into the crisp morning air, I don’t care. I’m in a 500 SL – and therefore I’m me, on a very, very good day. And don’t you want to feel that good about yourself too?

Quentin on the Benz

The dimple-roof SL has always been a strong seller and the 500 V8 is the most glamorous of them all. Values just keep rising and good ones are getting hard to find now. Their perennial appeal comes from those matinee idol looks, snug cabin and the silky flow of power that just makes you want it again and again.

R107 SLs are undemanding, solid and as comfy as an old sofa, but flick the gearbox into Sport, dab the throttle and the 500’s rear squats down and it hurls forward briskly. There’s a lovely split personality to the 500 SL too and oozing slowly round town is just as much fun as barrelling down a French autoroute.

I thought prices had peaked in 2013 but demand is still strong, with low- milers costing £25,000-plus. Go for a post 1986 car (much better rust protection) with a warranted mileage and service history and it’ll be one of the safest investments you’ll make. A fine one bought now at the right money will climb gently in value this year.

The R107 500 SL is up there with the E-type as the classic that’s on everybody’s shopping list – and it’s a desirability ranking that’s not going to change any time soon.

Just Surrey today, but the urge to carry on across Europe is strong.