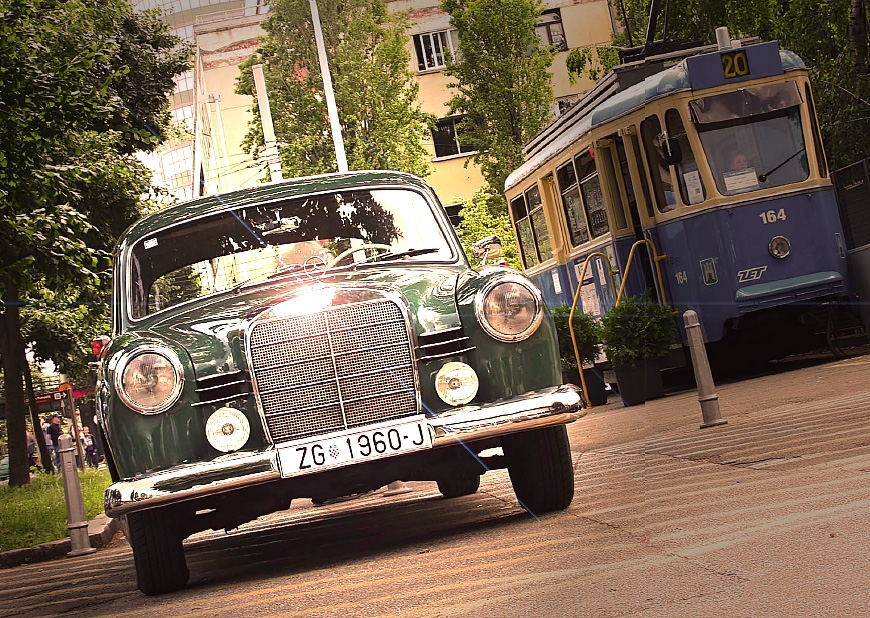 The life story of a Mercedes-Benz 180D W120 life cycle. Bought in Africa, used as a daily hack and then put in semi-retirement, its 50 years has seen crashes, war and presidential approval. Words: Robb Pritchard Photography: Hermann Ries.

This Ponton’s story starts in a rather unusual place… in the Ethiopian desert, in fact, where in the late Fifites Milan Jelusic was a mechanic in charge of maintaining a fleet of Land Rovers. Now a sprightly 90-year-old his eyes still sparkle when he’s talking about the owned-from-new family Mercedes. ‘I was working for a surveying company that was using Series IIs to scour the desert for evidence of oilfields,’ he says. ‘But one day I saw a couple of 180s that Mercedes was using to conduct endurance tests in the heat – and decided that I wanted one.’ 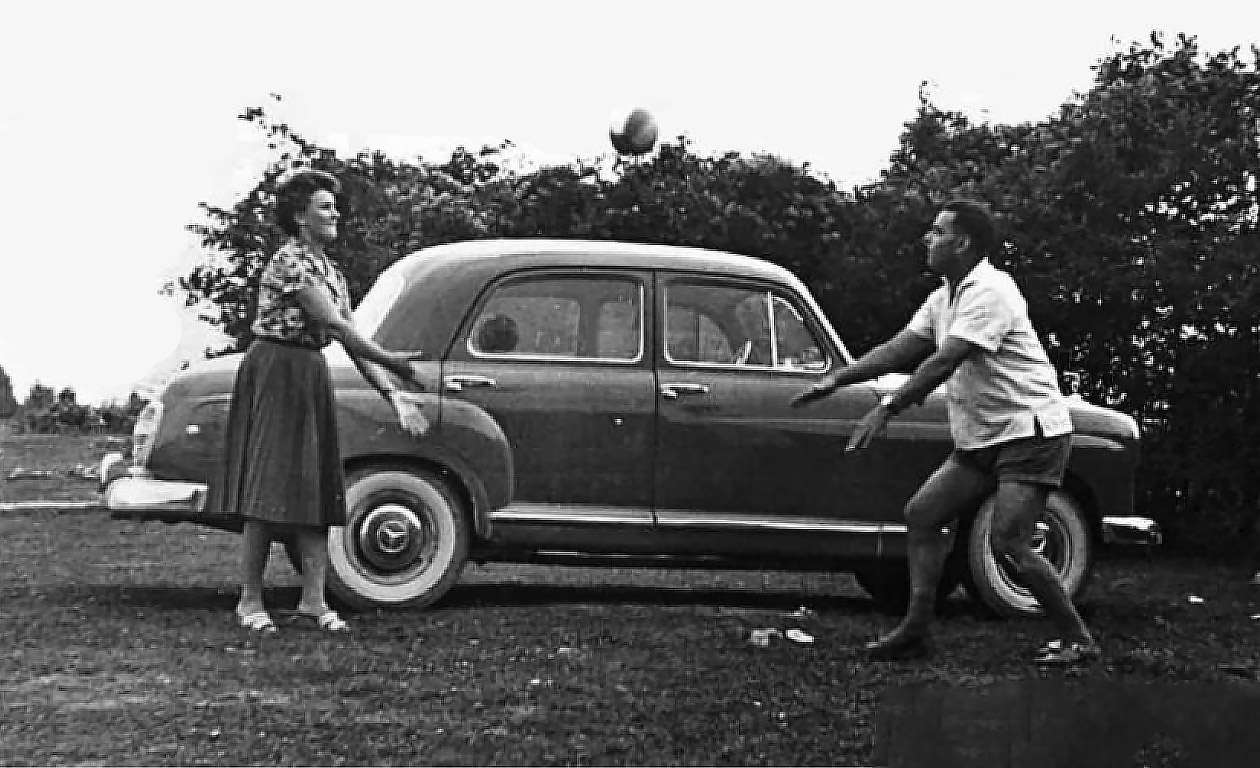 The beginning of the Sixties wasn’t exactly a boom time for Eastern European residents as Communist bureaucracy clamped down severely on what people could buy and import and at that time only MPs in Belgrade were driving new Mercs… But a loophole meant that people who work overseas for more than 12 months were allowed to import foreign cars.

It was an opportunity Milan used to his advantage, ‘I had to wire $1952 from the Ethiopian capital Addis Ababa to Stuttgart, via New York.’ On July 5, 1960 this 180D W120 rolled off the production line and just 11 days later was ready to be collected from the importing company in Ljubljana. ‘In those days the paperwork involved for anything foreign was next to impossible so getting the car when it was just 11 days old was basically a miracle,’ he smiles. The 180, in production from 1953 to 1962, was the bridge model from the pre-war designed 170 to the much boxier 190 of 1961. It’s a late model b-series so has the wider grille and slimmer tail lights. Modest power comes from the 1.8 L4 diesel but the level of luxury and ease of driving were the Mercedes’ selling points. 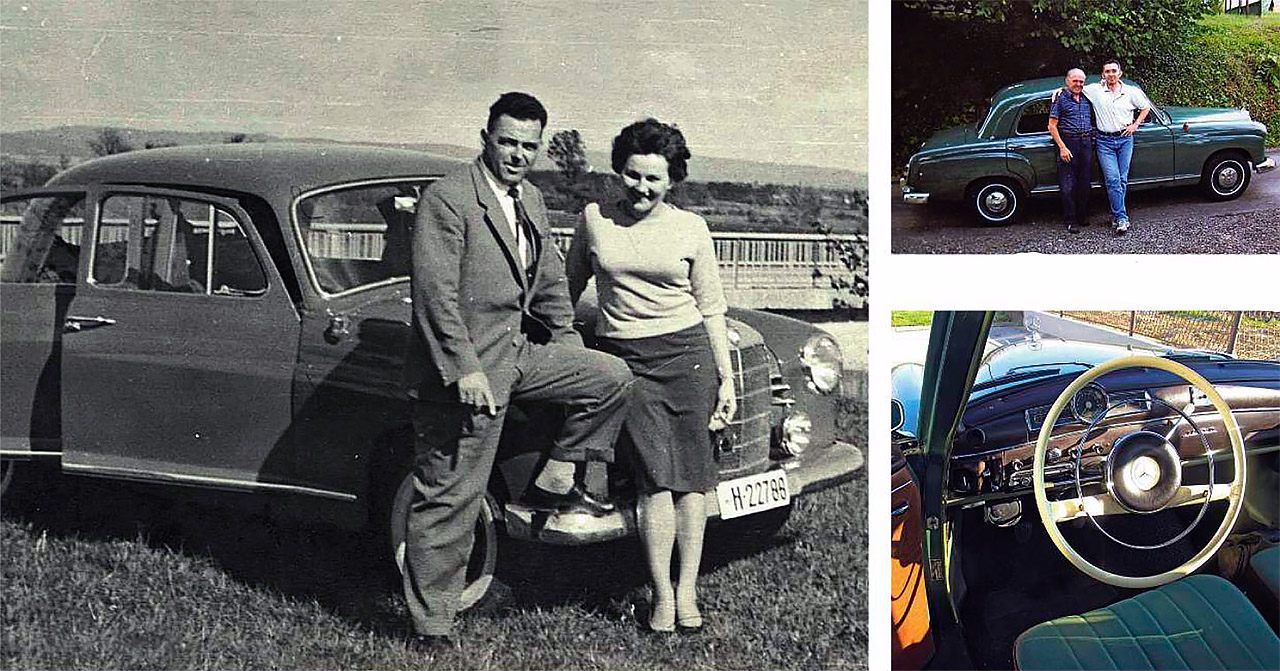 Milan and his wife, all smiles on Sava Bridge, Zagreb in 1960 or 1961. Milan (left) and son Damir have a lifetime of experiences with their Mercedes 180D. Interior may be non-original, but it still has lots of charm.

There weren’t many post-war cars in Zagreb in 1960 and this one was owned by a normal working guy who parked it on the street, so every time I came back to where I’d left it there would be a little crowd of interested people around asking questions.

It really was a special car back then. My brother-in-law was a chauffeur in Germany and when his company changed from a 170 to a 180 he said it was like being in a spaceship by comparison. I remember how impressed he was with how you could do the wipers and water with just one switch without having to pump the water with the pedal on the floor!’

In 1975, after 15 years of faultless service, the time came for semi-retirement as a Fiat 126 was bought as a daily run-around. This was the first time the Mercedes nearly left the family and the first time that Milan’s wife saved it. ‘It was in the family longer than she was. We went on our first date together in it and a few years later drove it to the church to get married, so she didn’t want to see it go. And besides, for going on family holidays with two children the tiny Fiat wasn’t so practical…’

1986 Nearly the end of the road but reprieved once again

But it was a family holiday that almost spelled a sad end for the car. Milan’s son and the car’s current owner, Damir, explains, in 1986 my brother Dario wanted to take his friend on holiday and my father agreed, as long as he got two new tyres. So he went and got two radials for the front… but didn’t realise he’d left two crossplies on the back. On a mountain road near Plitvice Lakes in the centre of Croatia he needed to brake hard. The car went out of control, rolled up the bank and landed on its roof. It was a very strong car and they weren’t hurt: they were able to get out because the doors still opened. Although the car was pretty badly damaged, my mother didn’t want to have it scrapped so she paid for the repairs. They never fully explained to my father why the doors didn’t quite fit any more.’

A car nearing 30 years old takes a lot of maintenance and the next chapter of its life started one day * – in 1988 when Milan lost patience while trying to get it started on a cold morning. ‘He slammed the door shut in anger,’ Damir explains. ‘I asked why he treated a car he’d owned for so long like that and he asked me if I would look after it… I already knew all the idiosyncrasies about driving it, like the funny movement you have to do with the gearlever between second and third and how to drive it like my dad – not my brother. So I said yes!’

The Mercedes copes with modem traffic well, even taking in an epic journey to its birthplace in 2009

1991 The outbreak of war prompts a lay up

Eventually it was time for some repair work to be done, in the Seventies the dealer in Ljubljana was selling off a load of Mercedes spares cheap so Dad bought a lot of stuff. Then, in 1991,1 asked the mechanic in my parents’ village to rebuild the engine. But then war broke out… It was a very turbulent time for everyone, it was a bitter and complicated conflict. The car stayed safe in the garage for a couple of years.’ Although the car never strayed too far the political climate has always shifted dramatically around it. ‘At first the numberplate had H for Hrvatska (Croatian for Croatia) but then they ran out of numbers so they gave it ZG for Zagreb with a red star of communism on it. After the war in the Nineties she had Croatian plates and now we have the blue flag with a circle of yellow stars. We bought the special plate with the numbers “1960” but the J for Jelusic was just a nice coincidence.’

1997 Restored again but with an eye on keeping costs sensible

Another restoration project in 1997 focused on tidying up the bodywork, which actually only had a few spots of rust. A local bodyshop did all of the work.

it hadn’t been driven in the winter since the mid-Seventies so the body has always been in good condition and all the panels are original. We had the bumpers rechromed and the body repainted, using exactly the same paint that Mercedes did.

‘An upholsterer redid the interior, which was starting to get worn. But back then I couldn’t afford the original Mercedes material so I just asked him to find the closest match possible… Now I do have the original material so the next time I do some work it will be replaced, although it won’t need doing any time soon.’

I ask Damir if he remembers the moment he realised that the 180 had gone from being just a treasured old family car to a true classic.

‘Maybe it was in 2000 when I came to understand that it would need some real looking after. Since then I’ve had much better paid jobs so I can afford to spend a bit more money on it – for example, the Maxxis whitewall tyres and a set of original-spec Bilstein shock absorbers. I also started noting down when I replaced what – so there’s no risk of wearing anything out just because I forget when I last changed it.’

But this has never been a concours car and hasn’t been, as the classified ad cliche goes, ‘maintained regardless of cost’.

Because the speedo has worn out a couple of times no one is really sure of the total mileage. ‘My father will tell you a million kilometres but I think it’s somewhere between 300,000km and 400,000km (about 250,000 miles).

As we cruise back to Zagreb he pulls the clock out of the dashboard and shows me the kitchen clock mechanism taped to the back of it. ‘The original was far too expensive and the watchmaker I left it with for two years said he couldn’t fix it, so I made it work my wav,’ he smiles. There’s also a little chip in the thin dashboard’s strip, it will be staying that way. That little strip is €600 (£500).’

A few years ago Damir started going to Oldtimer shows, each a little further from home than the last. Local weekend meetings on the Adriatic coast turned into international shows in Slovenia, the Rose von Worthersee in Klagenfurt, Austria and veteran tours in Brno and Prague in the Czech Republic. But the biggest road trip so far has been to Stuttgart, because what better place to take a Mercedes on its 50th birthday than back to where it was born. ‘It was a beautiful trip,’ Damir recalls with a smile. ‘We spent two full days on the back roads through Austria and Germany in the mountains and by the lakes. It was a perfect route to take such a car on. I loved every moment. It was a seven-day trip and we did about 2500km [1500 miles]: the only problem was the brakes overheating down from the 1763m Tauern pass near Salzburg.’

Another highlight was taking the president of Croatia for a drive. ‘They opened a new section of motorway to Split and for a bit of publicity had a few classics there for a photoshoot.

‘The president had a look at the other cars and decided that the Ponton was the best one to ride in. We were in the newspaper – that was fun!’

2033 He doesn’t know it yet, but… the next generation awaits

And it seems as though Damir’s grandson may have some fun times ahead of him too. ‘He’s three years old now, so hopefully I will get another 20 years of looking after the car so that I can give it to him one day.’