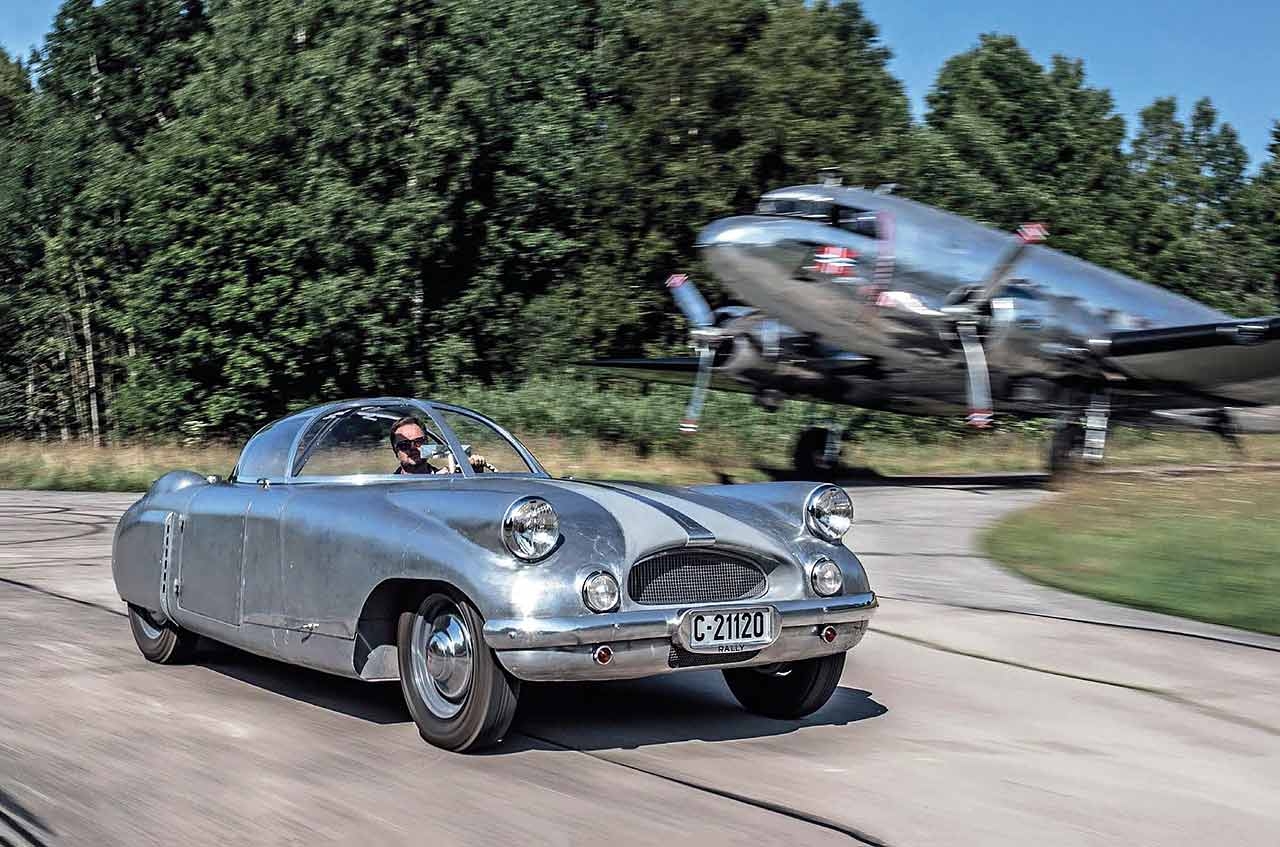 Unidentified Fjording Object. The Lysell Rally looks like a flying saucer, but it didn’t come from outer space: it was built in a Norwegian aircraft factory. Words Richard Holtz. Photography Martin Meiners.

Torp airfield, 120 kilometres south-west of Oslo. In front of a hangar sits a shiny twin-engined aeroplane, and in its shadow lurks an ungainly sports car with a strange domed roof. The car’s 3.9-litre sidevalve Ford V8 rumbles away, with a promise of 160bhp – but that is nothing beside the two Pratt & Whitney R-1830 ‘Double Star’ engines overhead, each mustering 30.2 litres, 14 cylinders and a whopping 1200bhp.

Some 16,079 units of one of the world’s busiest passenger and cargo planes were built, compared to just one example of the car, yet this unlikely pair does have two things in common: both have a bare, polished aluminium body, and both were constructed in an aircraft factory. The DC-3 comes from Douglas while the car, badged the Rally, was the brainchild of Swede Ralph Lysell, who wanted to direct aircraft manufacturer Norsk Flyindustri AS away from the sector it had been struggling in since the end of the second World War, and towards the more lucrative business of building taxis and sports cars.

Born Rolf Åre Nystedt on 2 May 1907 in Stockholm, Lysell followed his émigré mother to the United States in 1923. There he adopted her maiden name and changed his first name to Ralph. He graduated in engineering from New York’s Columbia University, then built some distinctive streamlined prototypes including the bizarre Auto-Avion, but sadly none of these ever made it into mass production.

Legends surrounding this failure persist to this day. According to Swedish magazine Tekniken för alla (Technology for all), American car makers did everything they could to suppress Lysell’s ideas. They banned him from working in the US automotive and aerospace industries for five years, out of fear that their cars would appear outdated compared to his designs. Nordic newspaper Aftenposten suggested that Lysell owned a car factory in Phillipsburg, Pennsylvania that was subsequently destroyed by flood.

What is certain is that Lysell moved to Germany, living at 13 Schwindstraße in Frankfurt while working as a consultant for Adler, BMW and Mercedes-Benz, and also as a test driver for the Stuttgart firm. While he was in Stockholm for a Mercedes promotional tour in 1939, war was declared. Lysell remained in Sweden and worked as a designer at telephone manufacturer Ericsson. During this time one of his most famous works, the Ericofon, was created. Later, he started his own business: AB Industriell Formgivning.

After WW2, Lysell moved to Paris, where he met a Norwegian woman. Whether he went to Oslo in 1949 out of professional curiosity or for personal reasons isn’t known, but the engineer was certainly interested in the use of new materials such as aluminium in the automotive industry, and Norway offered new opportunities. Due to import restrictions and the lack of a homegrown industry there were few cars on the roads, with most coming from the Soviet Union – and the Norwegians paying for them in fish.

Lysell had sketches of a sports car in his luggage, and took these to Norsk Flyindustri on the outskirts of Oslo’s Fornebu Airport. Demand for the firm’s amphibious aircraft had dropped severely, and Lysell saw an opportunity to create two cars built specifically for Norwegian roads and climatic conditions: a taxi and a sports car. Aftenposten reported on 17 January 1951 that the latter was to be called ‘Rally’ – not after the sport, but its designer’s first name. The Rally was built in 1951, initially as an open two-seater, with a body made of 3mm aluminium. At 5.3m long and 1.96m wide, it weighed 1.3 tonnes and was powered by a tuned Ford V8 employing twin carburettors to achieve some 160bhp. In theory, the windcheating Rally could top 200kph (125mph).

It wasn’t until 4 September 1954 that the car received its first numberplate, and the chassis number VDN 478 – where VDN stands for Veg Direktoratets Nummer, a series of identification numbers allocated to self-built cars and trailers. The Rally was licensed to Jack Roar Rollve, who worked for the state as a car auditor, but just a month later it changed hands again. After being sold to its third owner in 1959, the Lysell was overhauled and repainted. Four years later, Roger Glans from Halden bought the Rally, fitted the rear screen of a 1950s Studebaker as a windscreen and made a fabric hood for it. Finally, in 1964, it received a two-tone paintjob in the style of an early Corvette.

Glans then gave the car away in 1968, apparently due to its poor handling. Little is known about the two subsequent owners, but in 1980 a local enthusiast heard rumours of ‘an old Corvette’ and came across the Rally in Trøgstad. After it had passed through a further keeper, Pål Heine from Sarpsborg bought the car in 2007 and began exploring its history.

And what of Ralph Lysell? Always seeking the next challenge, Lysell spoke seven languages, was married seven times, and was something of an eccentric. Sadly, the Rally was destined to be his last car design and although he had plans to build 15 examples – and reportedly had the preorders to back this up – the adventure stalled. He died on 22 June 1987 in Värobacka, Sweden Today, the Lysell Rally lives with Eirik Bøle on the island of Nesøya, on the Oslofjord. The 59-year-old project manager has been collecting cars since he was 17 and now focuses on those with VDN chassis numbers and Norwegianbuilt racing cars. He also owns the Stousland Special, a second car built by Norsk Flyindustri and raced by Carl Jacob Stousland in 1951.

Bøle overhauled the running gear and took the body back to bare metal, but the biggest challenge was finding a glass roof dome: Ralph Lysell had included this detail in drawings, but it couldn’t be made at the time due to a lack of funds. Bøle’s solution was to copy the dome of the 1954 Pontiac Bonneville concept as part of an extensive rebuild that was completed in 2012. The Rally is housed in a building on the disused Fornebu airport site, and Bøle hopes to one day set up his own museum – where this Norwegian oddity will undoubtedly be a star exhibit.

‘American car makers did all they could to suppress Lysell’s ideas, for fear that their cars would appear outdated in comparison’