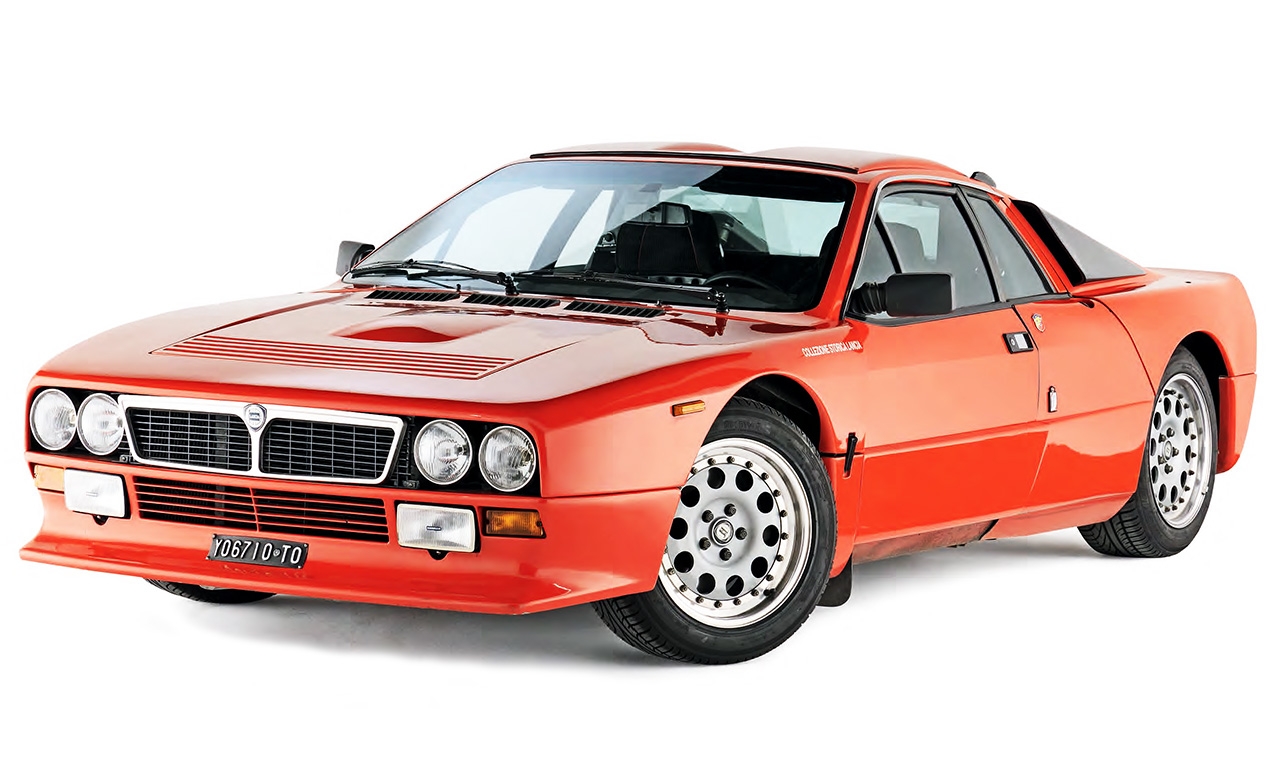 Lancia 037 Rally Development story of the Group B rally car Four-wheel drive would have been a great help, but Lancia’s engineers were short of time and experience, so they put the 037 together using stock components – and still turned out a world beater. Story by Ruoteclassiche/Alessandro Barteletti. Photography by Paolo Carlini.

Ingegnere Sergio Limone decided to build a rally car by combining the structure of the production Lancia Beta Montecarlo, the engine of the Abarth 131 Rally and the experience of Abarth Corse. It took 21 months to fine-tune the idea, develop the project, oversee the manufacture and obtain the homologation.

His car won the World Championship in 1983. The adventure of the Lancia 037 Rally started quickly in early 1980 when the International Automobile Federation (FIA) proposed the regulations for a new category that would subsequently dominate the world racing scene from 1982 onwards. It was called Group B and the rules were quite strict. No less than 200 road cars were to be manufactured with a limited number of examples prepared for rallying.

“We were not caught on the hop. Lancia had always been a protagonist in the discussions around the evolution of technical regulations. Cesare Fiorio, our sporting director, had always been a major player”, said the project manager, Ingegnere Sergio Limone. “With a drawing board, pencil, rubber and a lot of common sense, the ‘037’ (full project name ‘SE 037’) was conceived in this way. It was the first work fully thought out and coordinated by me, the result of my previous experience with the Group 4 Abarth 131, and my knowledge of Abarth’s potential.” 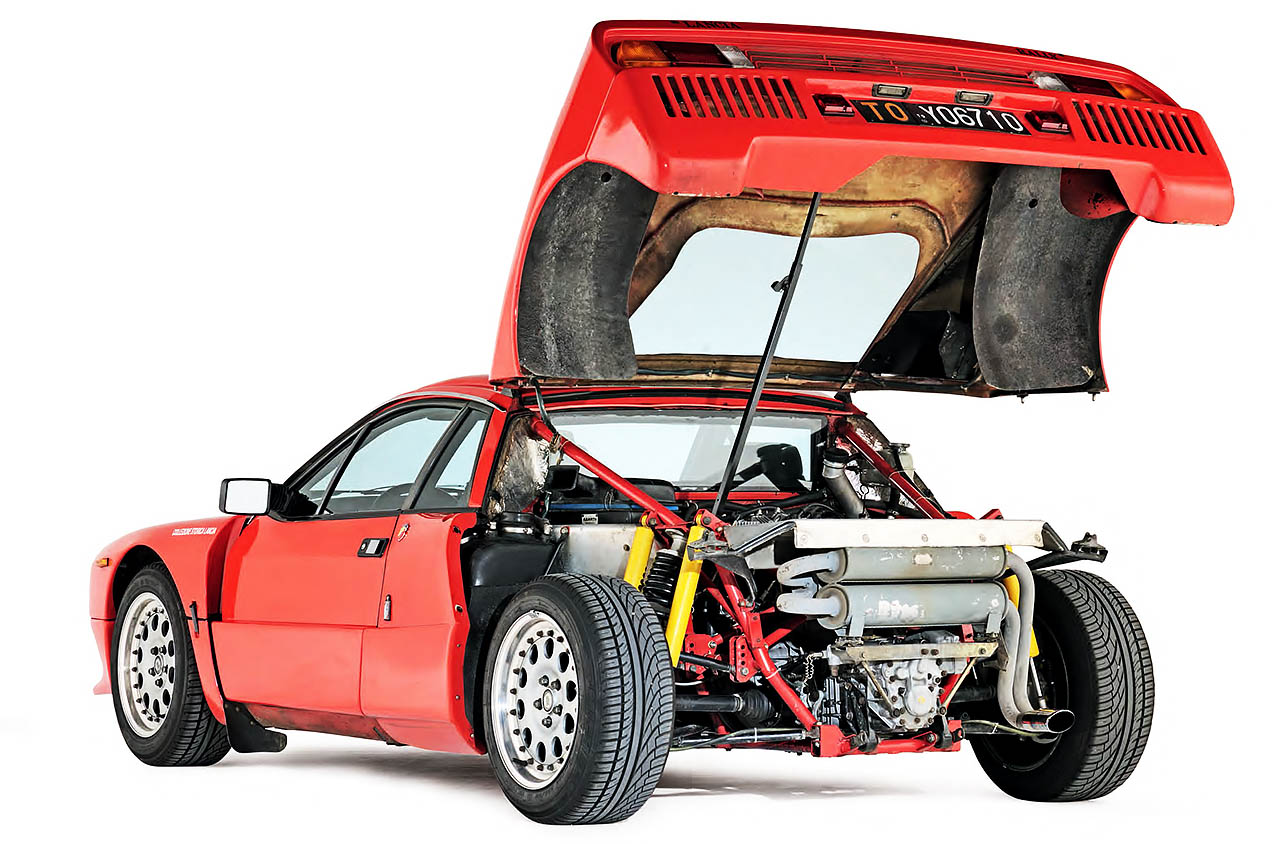 The Lancia Rally was designed for rallying, the road version existed purely to obtain homologation, and although tamed it featured the same technical specifications. While relating the story behind the evolution of this car, Ing. Limone explained that three alternative options were evaluated before a final solution was eventually found.

The first two options were ‘easier’: a Fiat Ritmo with a central engine (like the Renault 5 Turbo) or a Lancia Delta with front engine and rear-wheel drive (Like the Abarth 031). Then the more ambitious third option: a new car made from scratch, as the Stratos was originally, with a Ferrari V8 engine, tubular frame and lines similar to the Montecarlo. Limone recalled: “It was called SE 036 but we only constructed a chassis. It was too complex and way too expensive. Not to mention that Aurelio Lampredi, sole director of Abarth in 1973, would not accept the idea of using an engine which was so different from the traditions of the two Turin car manufacturers”. 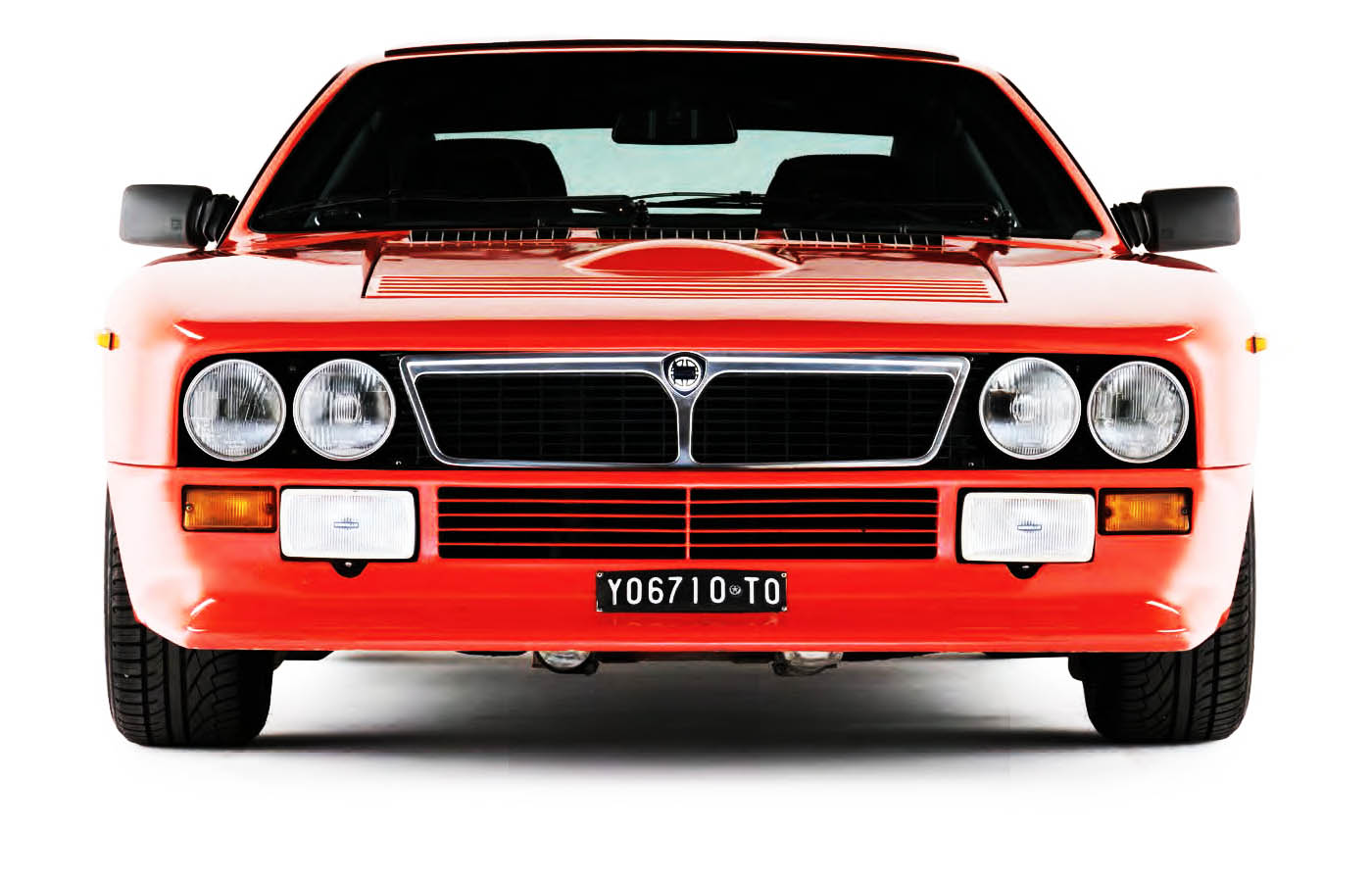 The final solution was the best compromise between times and costs. It began with the central section of the Montecarlo body in order to benefit from the many existing elements (doors, windows, the layout of the pedals and the seats), which were already in place. According to the plan, the chassis should be completed with two tubular steel front and rear structures to accommodate the engine in a longitudinal central position (the production Montecarlo was transverse).

“The project was quickly realised and the preparation of 200 examples was achieved in time for homologation”, recalls Ing.

Limone, “In addition, the Montecarlo was a product managed by Pininfarina outside the Fiat plant. The smaller size of the company made it possible to react to special needs in a much simpler way. It also made sense project wise, because the body of the Montecarlo would allow us to obtain a low car with good air penetration. Additionally, it proved sufficiently robust to immediately satisfy the mandatory impact test against a barrier at 48km/h.

“As a production model, the Lancia Montecarlo was coming to the end of its life, but when it became part of the rally project Pininfarina kept it in production until the required 200 short bodies (the central cell) had been manufactured. The Spider version was chosen instead of the Coupe, which allowed the mounting of a glassfibre roof with two apertures, which provided sufficient headroom for the driver’s and the navigator’s helmets and improved habitability. Pininfarina set up a small assembly line on which the central body section was welded to the tubular subframes made by Abarth with the support of some external companies. The Lancia factory at Borgo San Paolo in Turin was properly equipped for special series cars (such as the Thema Ferrari) and was entrusted with the assembly of mechanical parts, also supplied by Abarth, car completion and finishing.” Limone emphasised: “Let’s not forget that each and every example was refined and finished by hand. Quite expensive indeed!”

The engine was a four-cylinder, four-valve, 1995cc twin-cam based on the 131 Abarth, which on the 037 was dry sumped and upgraded with a Roots-type ‘Volumex’ supercharger and fuel injection. On the road version, the fuel supply was managed by a single Weber twin choke carburettor. The synchronized fivespeed transmission was ZF type 5DS25 with frontal engagement.

The 037 was rear-wheel drive. “We already knew that four-wheel drive was the future for rallying, but at that particular time we were not ready and there was no time for experimenting. Sometimes we were tempted to say: ‘Let’s stop everything, let’s go for four-wheel drive…’ but this decision would have kept us out of the game for too long.” It was a prudent choice and indeed proved to be the right one, and despite the competition from the mighty Audi Quattro equipped with four-wheel drive, the 1983 World Championship of Makes would be won by Lancia with the 037. The difficulties encountered later on with the Delta S4 would confirm that if not properly developed, fourwheel drive can actually create more trouble than benefits.

In the beginning the 037 was not fault free. On many occasions the chassis proved fragile and during some tests, overstressing caused serious cracking. According to Limone: “When the car eventually overcame its childhood crisis and won so many races, part of the credit goes to the stubborn passion of Giorgio Pianta, an exceptional test driver. He chewed up so much asphalt with this machine… the drivers really trusted him.”

Plenty of joints are provided on the chassis to adjust suspension to the track conditions. Each corner is independent, each with overlapping wishbones, rear double shock absorbers for temperature control whenever the rough ground put the car under pressure. Both the engine and the rear axle are fully accessible thanks to the two large folding and removable hoods.

If the performance of the road version was already remarkable (205bhp, 220km/h, 0-100 in 6.2 seconds), that of the Group B Evolution (Evo 1) was impressive. Here the Weber carburettor gave way to Kugelfischer mechanical injection. The supercharger pressure was increased and a blow-off system was added which, when the throttle was closed in the release phase, released any additional output to prevent the supercharger from sucking up the already compressed air. The modified crankshaft featured eight counterweights and the bodywork also lost some weight. The final product was 300bhp at 8000rpm, a maximum speed of just over 160km/h and an acceleration from 0 to 100 in less than five seconds. Performance varied according to the gear ratios chosen, depending on the road surface.

The Evo 2 debuted in 1984, with a subsequent capacity increase to 2111cc and 350bhp, a reinforced chassis, new supercharger geometry with increased output, changes to the front subframe and removal of the rear bumper. The featured example, No 31, has always been part of the Lancia historic collection and has covered just 12,000km. It is the same car that Quattroruote magazine handed over to Walter Röhrl for road testing purposes over 30 years ago. That test is featured again on these pages.

“The first time I sat behind the wheel of the 037 Rally was at the La Mandria circuit near Turin on an autumn afternoon in 1982. In the morning of that same day, I had signed up with Lancia for the 1983 racing season in Cesare Fiorio’s office.

In spite of the many restrictions imposed, Pininfarina had succeeded in manufacturing, all in all, a pleasant car. Any judgement on this car, however, should take into consideration the use for which it was conceived: a car with a centrally located engine and very compact size providing room for two people without luggage. The driving position is correct, the controls are all nicely positioned and within easy reach.

The pedal box is only slightly offset. The instrument pack is complete, visibility is excellent in the front, but very poor in the rear due to the sloping rear window. “And now, let’s mention a few words about the engine. The power for a 2-litre, fitted with a volumetric compressor, is impressive at every speed. The torque starts at 3500rpm but it is at its best at 5000rpm. The noise level is high because the engine, designed for rallying, is practically inside the cockpit. Performance is excellent and easily exceeds 220km/h.

The acceleration is fierce and few other GTs in the same class can perform better in tests. A key feature of this car lies in the remarkable flexibility, even in fifth gear you can run easily at low revs. The other mechanical parts are clearly designed for rallying. Transmission engagement is almost perfect, steering is direct, very precise and light in every situation. The brakes are equipped with four ventilated discs, providing remarkable performance. Braking is good, smooth and well balanced.

“With regards to comfort, you should realise that this is a sportscar adapted for road use, with its stiff suspension and high noise level, but the comfort is acceptable for a car designed for competition. Road driving is not particularly challenging, you can drive smoothly on turns, body rolling is imperceptible and its behaviour is completely neutral even at high speeds.

Pushed to the limit, the car slightly understeers in narrow bends and when under acceleration, it shows good power oversteer that the driver can control easily thanks to the car’s quick and precise steering. The car is easy to drive also on rough ground, the suspension effectively absorbs lumps and bumps and allows good traction. The car’s behaviour is safe at all times and feedback is never harsh.

In 1972 Sergio Limone was a young graduate in mechanical engineering with an automotive specialisation. He started his career at Abarth at the age of 24. After working three years as a trainee in the engine testing department, he moved on to car development and eventually became Chief Design Engineer in 1980. From that time on Limone oversaw the development of all rally Lancias and Alfa Corse cars (the 155 and 156 generation, among the others). In 1999 he was responsible for the development of Fiat competition models, from the 500 to the Punto. In 1986 he also took the role of manufacturers representative at FIA meetings and served 20 years in that position. He is now retired.

ABOVE LEFT: The 2-litre, 16 valve twin-cam engine was derived from the Fiat Abarth 131 and fitted with a Volumex supercharger.

To comply with Group B regulations 200 examples of the 037 rolled off the production line. 150 of them were painted red, 50 remained unpainted and provided the bodywork for the racing versions: 20 Evo 1 and 20 Evo 2. Almost all of them are still around today. Many replicas were derived from the Lancia Beta Montecarlo, and they are easy to recognise.

BRAKES: Ventilated discs all round