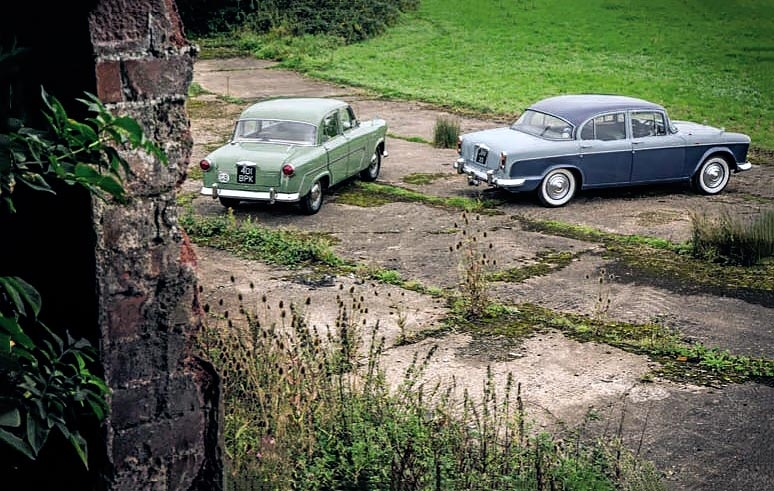 Some cars, it must be said, manage the rare achievement of looking naturally imposing. It could be the shape of their rooflines, the style of the grilles, their overall stance or countless other details, but somehow a Humber Hawk or a Standard Vanguard Sportsman always has an air of authority. And in their heyday, albeit in very different fashions, they each informed other road users that here was an owner of substance.

The rarer of this splendid duo is the Sportsman, for prior to its introduction in August ’1956 the Vanguard name had never been associated with glamour. When Standard announced the original model in July 1947, some observers noted that its coachwork was reminiscent of a Plymouth, but in the main, it was as reliable and unostentatious as a set of government offices. Six years later, the Phase I was succeeded by the three-box Phase II, which still appeared to belong to a realm of smog and Utility furniture, while even the monocoque-bodied ’1955 Phase III seemed to convey all the thrill and dynamism of a public information film.

By the mid 1950s, a Vanguard was perfectly suited to the motorist who believed that the cast of The Goon Show was guilty of sedition and that any Ford Zephyr Six or Vauxhall Velox was driven by a spiv or a wideboy. There was also the Coventry marque’s well-known association with the armed forces, military bases from Aden to Catterick all having at least one highly polished Standard staff car. But, in 1956, the star of the company’s display at the Earls Court Show was a Phase III that was decorated with chrome, powered by a twin-carburettor engine and which featured a cigar lighter, hide upholstery, a clock, dual overdrive and even ultra-violet panel lamps. It was almost as if the Vanguard had entered the bold new world of the nascent affluent society.

There was a ‘traditional’ grille to enhance the middle-class appeal, lending the Sportsman the air of an alternative to a Jaguar 2.4 or Riley Two-Point-Six. It helped to distinguish the model from its cheaper stablemates, but the globe logo was unmistakable evidence that this car was originally intended to be badged as a Triumph Renown.

Standard Motors had acquired the marque in 1945 and the following year launched the 1800 Town & Country saloon, with semi razor-edge coachwork on a Standard Flying Fourteen chassis. In 1947 it gained the Vanguard’s 2088cc engine, and in late 1949 the Triumph Renown combined the Phase I powerplant and chassis with a body that appealed to a certain sector of the market – post-war engineering clad in a respectable pre-war suit, all at a price of less than £2000.

As the late Michael Sedgwick observed in his book Cars of the Fifties and Sixties, touring saloons were on their way out by the mid ’50s, and the Renown ceased production in 1954. It made sense, however, for Standard-Triumph to devise a version based on the Vanguard Phase III, revitalising an established name as a competitor in the Humber/Rover/Wolseley class, as well as an alternative to the top-of-the-range Fords and Vauxhalls. There was also the fact that Triumph had achieved worldwide fame with the TR; the Sportsman could bask in its reflected glory.

The decision to market the car as a Standard was made very shortly before its launch, but one Triumph aspect to interest potential buyers was the engine. It is not quite the same unit that powered the TR3 – the Vanguard’s valve timing and 85mm bore were retained – but the twin HD6 SUs gave 90bhp as opposed to the 68 of the Phase III, meaning a maximum speed of more than 90mph.

One rather ambitious sales poster billed the Vanguard alongside the TR3 as ‘Two Outstanding, High Performance, Sporting Cars’, the former apparently ‘a car that breathes prestige in every gracious pore’.

Alas, the Sportsman was not a success, with fewer than 1000 constructed before it was withdrawn from price lists in March 1958 – although manufacture might have ceased as early as 1957. The car remained available by special order until 1960, but there seem to have been few takers.

One challenge to the flagship Vanguard was that Standard, in its post-war incarnation at least, was closely associated with duty and restraint as opposed to conspicuous consumption. Another issue was its cost. At £1231 it was more expensive than a Vauxhall Cresta, Austin Westminster or Ford Zodiac, yet it lacked the ‘traditional’ appeal (and six-cylinder refinement) of a Wolseley 6/90. There was also the matter of the column gearchange – de rigueur on many a large saloon but not expected on a car badged as a Sportsman.

Inside, the atmosphere is not that of a gentleman’s study as you might have expected, but quasi-Americana. From the stylised ashtrays to the colours of the leather, the impression is of 77 Sunset Strip rather than 23 Railway Cuttings. There was even that bold Overdrive insignia on the bootlid, to inform owners of lesser cars that here was a sports saloon of note.

‘Ours’ left the factory on 23 October 1956 and its first owner was an MP, who requested special-order single-tone paintwork because he believed that the standard two-colour finish was too ostentatious. That said, if you wanted to keep a low profile, a Sportsman was not the ideal car. From 1985-’2006 the Standard was a part of the Heritage Motor Centre collection and its current owner Mike McDowall acquired it in 2010.

In terms of rivals, the spring of 1957 marked the debut of a notable four-cylinder model. Anew Hawk may have set you back a few more guineas, but it offered the distinction of Humber ownership as well as the country’s largest unitary body.

For the previous 12 years the name had denoted the entrée into the distinguished realm of Humber, and while the latest version had a familiar 2.3-litre engine its coachwork was all new – and the winner of the International Elegance Competition in Rome, no less. Motor Sport rather rudely opined of the predecessor of the Series One – as the ’1957 model would retrospectively be known – that it was a ‘wide, sluggish car which invariably inhabited the centre of British roads, driven without ambition by the elderly and sedate’. The new model, however, was deemed to be ‘a comfortable, well-appointed six-seater saloon of good appearance’.

The Hawk looks solid, the two-tone paint on this 1958 example making the Humber appear positively jaunty in its formidable fashion. It’s been owned by twins David and Geoff Wells since 1961 and one of the reasons they bought it was its American style. In the 1950s, Rootes saloons reflected US design and this one’s in-house lines are a clever blend of ’1955 Chevy with municipal respectability. Standard equipment included two-speed wipers, a reversing lamp, folding armrests and a front seat that was adjustable for height – via a spanner. Overdrive or a Borg Warner automatic were extras.

Both cars were sold as offering accommodation for six, but with the Vanguard the occupants would have to be short and slim – especially those on the front bench. The Hawk is larger and really does have space for a sextet on its Vynide-trimmed seats. As befitting a Humber, there is more than enough headroom for driver and passengers alike to don a Homburg hat.

McDowall remarks that one reason for buying the Sportsman was its “extra degree of power compared to your average ’50s saloon”. He reports that it will cruise at 60-70mph, and the only flaw is the gearchange, which cannot be hurried. That said, many people will agree that it is entertaining, with much dramatic stirring of the lever in the fashion of a B-movie getaway driver. Once in third, the car is in its element, with a distinctly TR engine note enhancing the sensation of being en route to the races.

Unlike the Vanguard, the Humber boasts a four-speed column shift, which was a first on a Hawk. David remarks that although the transmission demands double-declutching at times, the overdrive “really benefits the car when you pass the 50mph mark”. Compared to other British saloons of the period, the Humber handles better than you might imagine, with quite restrained roll, while the ride insulates passengers from even the worst surfaced of highways. Above all is the sense of refinement, the smoothness of the power unit belying its four cylinders.

The Sportsman and the Hawk are prime examples of cars from the pre-motorway era. In town their lack of power steering is quite evident, but at speed they are in their element – reflecting their raison d’être of being able to negotiate a trunk road with minimum fuss and maximum verve. Both also represent the twilight of a distinct form of motoring. Even in 1957 the ‘big four’ five/six-seater was becoming a rarity in the UK, Ford, Vauxhall and BMC having already opted for ‘sixes’ for their offerings – a move that Standard would not make until 1960 with its Luxury Six. Of course, any Rootes customer in need of greater power and luxury could have placed an order for a Super Snipe.

Personally, I would need both of these cars – the Hawk for business and the Vanguard for leisure. When production of big Humbers ceased in 1967, it was a depressing moment for the motor industry because the Hawk is the epitome of a dignified car that does all that is asked of it quietly, efficiently and with a great deal of charm. Small wonder that a Humber was perfect for officialdom, many a newsreel showing ministers arriving in a chauffeur-driven Hawk to open a new power station or bypass.

As for the Standard, it displayed genuine ambition; with a floor change, timber to the interior and Triumph badging it might have stood more of a chance. Of course, that was the format of the 2000 of 1963, although that was a different form of ‘executive car’ – aimed at the young estate agent rather than the middle-aged professional. You can imagine the typical Sportsman owner in 1957: a bank manager who regarded any application for an overdraft with a sense of disdain. But come the weekend he would don a cravat and delight in the overdrive as he headed for the golf links. Sensibly stylish – that is the Sportsman.

Brakes drums all round

Brakes drums all round