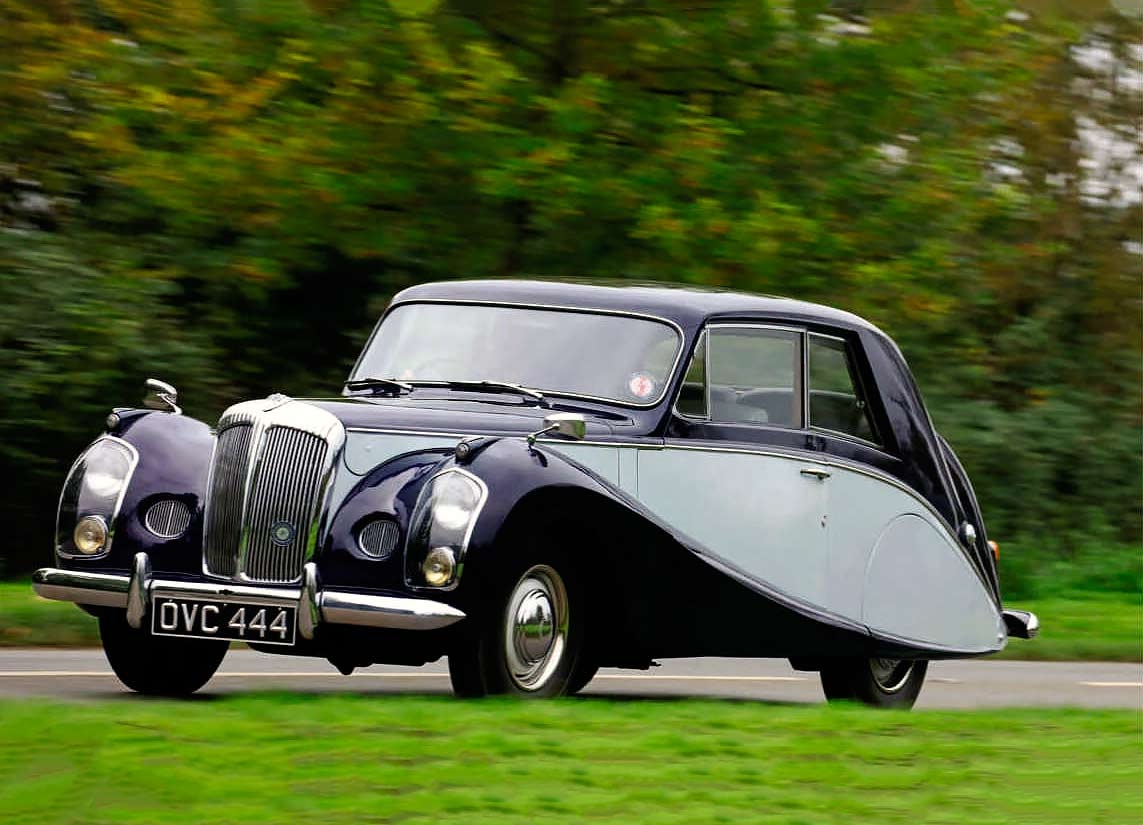 Fit for a prince Martin Buckley tells the story of the forgotten Docker Daimler – the Hooper-bodied Dauphin – and the notorious couple who ran the firm in the early ’50s. Photography James Mann.

Daimler Dauphin  Buckley tells the tale of the Dockers.

The last Daimler-badged Jaguars were built in 2007 and the name has lain dormant for so long now that it looks unlikely to ever make a comeback. And if it did, would it mean anything to anyone under 60? Its irrelevance in 2018 is in sharp contrast to the early ’50s when the name was rarely out of the headlines, if not always for strictly edifying reasons. Enter Lady Norah Docker and her star-spangled, mink-lined Daimler show cars, which had been a fixture of the Earls Court Motor Show since 1951.

While they outraged the establishment with their vulgarity, the Docker cars thrilled the tired, careworn public with austerity-shunning features – silver Thermos jugs and lizardskin-covered manicure sets were typical – and spectacularly rakish lines by Osmond Rivers of Hooper & Co of St James. And then there was the attention grabbing paintwork: Stardust, shown in 1951, had 7000 gold stars applied to its flanks by a heraldic artist. Lady Docker, wife of Daimler’s managing director Sir Bernard, believed that these extravagant, hugely expensive vehicles were the perfect counterpoint to the grimness of the times. In a monochrome world of smog, rationing, bombsites and polio, they were objects that seemed to give people permission to dream about better days to come.

Lady Norah also saw the cars as a cost-effective away of promoting the Daimler brand, a name that she correctly perceived as flagging in the face of more fashionable luxury opposition. Norah, for all her supposed vulgarity, had a nose for that sort of thing: the smaller, cheaper £1066 Conquest saloon, introduced at her instigation, undoubtedly broadened the make’s appeal.

Yet it was the antics of the Dockers themselves that were garnering more column inches in the press than the cars. In 1952, the couple were asked to leave a charity cabaret at the Casino in Monte-Carlo after Norah had been heard complaining loudly about the quality of the turns on stage. Later, there was a well-documented confrontation with a harbour guard in Capri and then a court case relating to holiday currency infringements that cost Sir Bernard £25,000 to defend – and his place on the board of the Midland Bank. It all added to the suspicion, firmly held in some quarters, that Lady Norah was still, at heart, a jumped-up former dance hostess: a lucky girl born above a butcher’s shop who had been made a rich widow twice before. When she was not swanning around Europe on her doting husband’s yacht, Norah was making a fool of him by being allowed to meddle in the affairs of the Daimler Company.

But maybe the firm needed Norah more than it realised. In 1953, Daimler car sales were struggling when burdened with 66.6% Purchase Tax on luxury goods. The situation was so dire that production of the Regency was suspended and the price of the Consort drastically reduced.

Throughout the 1950s Daimler’s range lacked discipline, with too many different models and body styles but not enough buyers. Just to add to the air of gloom in Coventry, it looked as if Daimler was about to lose its monopoly on providing cars for the Royal Mews; the new Queen Elizabeth was increasingly being seen out and about in a Rolls-Royce Phantom IV.

None of the above, though, discouraged the Dockers from making their customary Earls Court statement that year in the shape of the two-seater coupé called Silver Flash. And flash it was, complete with red crocodile-skin dashboard, silver vanity cases and Sundym glass. It made the usual headlines, but was overshadowed by the appearance on the Lanchester stand of the car pictured here: in effect, that year’s bonus Docker offering, the Dauphin.

Having acquired Lanchester in 1930, BSA (Birmingham Small Arms, Daimler’s parent company) had been using the name on a series of drab middle-class four-cylinder cars since 1946. The precise rationale behind the Dauphin is difficult to unravel, but it can only have been an attempt to boost the make’s image. The model name at least made sense, sticking to Daimler’s regal theme: a Dauphin is a French heir apparent to the throne (don’t worry; I had to look it up).

The Dauphin was a four-seater, Hooperbodied coupé based on the strengthened Lanchester 14 chassis but with a 2.4-litre, twin-carburettor 92bhp Daimler straight-six. Its semi razor-edged ‘Empress line’ body – in aluminium over an English ash frame – looked like a scaled-down version of the Stardust with the faired-in Lucas headlights that were the Hooper/Docker trademark. But there was no lavish paint-job or gold plating here, just a tasteful combination of blue over grey with matching Vaumol Connolly leather. Lady Docker couldn’t make up her mind over the colour and there are copies of memos from Oswald Rivers to the Hooper works to that effect in the car’s bulging history file.

At £4000 (equivalent to £105,000 in today’s money), takers for the Dauphin were always going to be scarce. It received a favourable one-page write-up in the show edition of The Motor, but no orders were received at Earls Court. Only one other Lanchester Dauphin was ever built, a left-hooker sold to an American via Appleyard’s of Leeds. Having said that, the basic Dauphin body shape (Hooper Design Number 8396) was used on at least one Conquest Century but with conventional single exposed headlamps.

Chassis 70007, meanwhile, went back to the factory and re-emerged as a fluted-grille Daimler Dauphin, with the Coventry registration number OVC444, in March 1954, probably because the Lanchester name was about to be discontinued. It became the personal car of Daimler general manger RE ‘Dick’ Smith, who just happened to be married to Norah Docker’s sister, Bernice. The Docker family roadshow was running out of steam, however, as the BSA Board – and the firm’s shareholders – ran short of patience.

The final straw was a near-£8000 bill for a wardrobe of couture gowns (depicting Daimler cars in sequins) specially created for Lady Norah to use at a promotional event in Paris. When the Inland Revenue rejected Madame Chiberta’s invoice as a legitimate expense, the BSA directors sent Lady Docker the bill and then began moves to unseat her husband from the board.

With Sir Bernard’s departure in 1956 – after a brave fight that even included an advert on the new Independent Television – Smith resigned in protest and lost the use of the Daimler. Like the five full-sized Docker cars, this right-hand-drive Dauphin then disappeared into the motor trade. There is a mention in Brian E Smith’s The Daimler Tradition of both the Dauphins turning up at a Daimler & Lanchester Owners’ Club meet in ‘excellent condition’ in 1970, but OVC 444 eventually received a psychedelic peace-and-love hippy paint-job before being abandoned, in a sad state, in a Birmingham scrapyard. What happened next is sketchy, but at some point the Dauphin was rescued and became the subject, in the late ’80s, of an epic body-off restoration by a company in Sheerness for a Harley Street doctor.

While Mulliners and Park Ward were dabbling in exciting, voluptuous shapes, Hooper, one of the oldest of the traditional English coachbuilders, was stuck in a stuffy, pompous world of formal designs that had not changed all that much since the 1930s. At just under 16ft long, the blousy Empress lines rather overpower this compact chassis. The quality is there to behold, however: you can see it in the door fit and the way the beautiful maple wood (or is it bleached walnut?) cabinetwork flows from the dashboard into the door cappings.

The thin-rimmed sprung wheel is a monster, but it has to be because you need muscles to park the Daimler or swing it around slow corners, and the slightly curved ’screen was borrowed from a Conquest Roadster, which was launched at the same Motor Show. There’s a fuel reserve switch on the dash that speaks of a time when petrol stations were few and far between (and not always open), while seemingly routine features such as windscreen washers and reclining front seats give an insight into how upmarket the Dauphin really was. It even has electric front windows, almost unimaginable decadence in 1953. There are cosy twin bucket seats in the rear and a feeling of privacy thanks to the fat C-pillars.

The Dauphin has no pretensions to being anything other than refined ’50s transportation. It has a generic straight-six burble and acceleration best described as unobtrusive, but then it’s thought to weigh about 3500lb. Some interest is provided by the pre-selector gearbox. Although conventional fully automatic transmissions were on the horizon, Daimler was still wedded to the idea of this four-speed ‘self changer’ which, thanks to its clever fluid flywheel, meant that you could idle in any gear without stalling.

As long as you keep in mind that the left pedal is for gearchanges and not a clutch, you won’t go far wrong. To get things rolling, you select ‘1’ or ‘2’ on the quadrant, let the pedal up decisively without slipping it and, with the handbrake released, the Dauphin pulls away. You set it up for the next shift by moving the lever to the appropriate number then pressing and releasing the gearchange pedal when you want that ratio.

Once you get the hang of it, changes go through – up and down the gears – as fast as you like and as smoothly as you could imagine. You just need to watch out for ‘false neutrals’, when the pedal kicks back higher than usual; it means that you haven’t pressed it hard enough.

Like most Daimlers of this period, the Dauphin is a camp dowager duchess of a car in the metal, like something Noel Coward or a ’50s ham thespian in the Donald Wolfit mould might have tootled around in. I should add that the current owner, Daimler collector Paul Chamberlain of Somerton, does not fit that description in any way. He simply spotted the Dauphin in a BCA sale 10 years ago and, at the very reasonable £10-12,000 estimate, had to make it his own. “I loved the look of it,” he recalls. “It just said: ‘Take me home!’” I’m glad that he did.

Thanks to Somerton Court Country House for providing the location: http://somertoncourt.com

‘IN A WORLD OF SMOG, RATIONING AND POLIO, THEY GAVE PEOPLE PERMISSION TO DREAM’