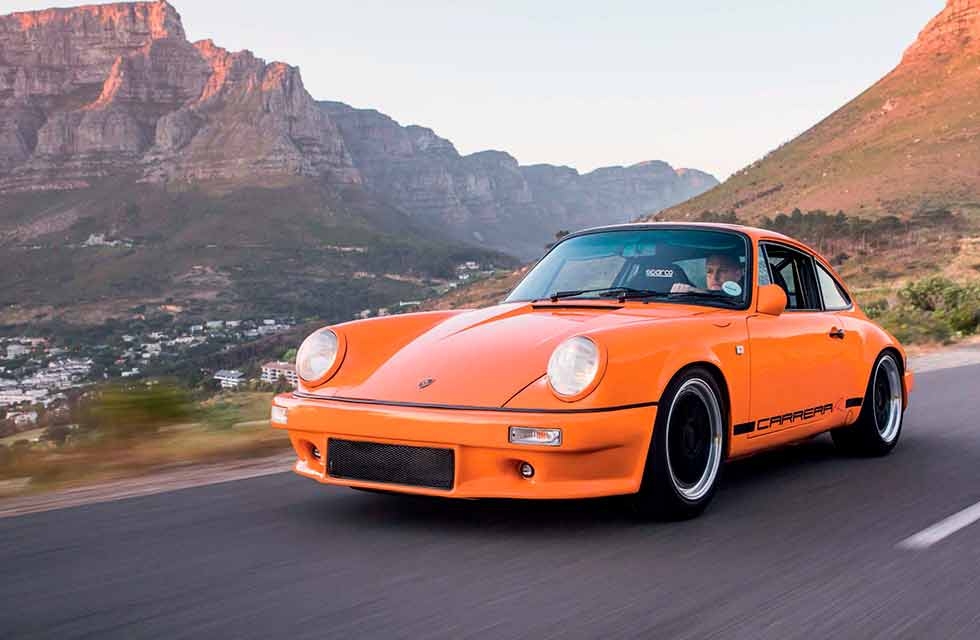 This GT3 RS-coloured Carrera 3.2 is the product of a desire to convert a street-spec air-cooled 911 into a formidable track attacker… Words Johann Venter. Photography Kian Erikson.

BOTH SIDES OF THE STORY CARRERA 3.2 RESTOMOD

Being desensitised to shocking imagery is a symptom of living in a world dominated by social media, but there are still things out there capable of stopping you in your tracks and taking your breath away. The 997 GT3 RS-coloured Carrera 3.2 you see on these pages, for example. Popping up on Instagram, photographs of the zesty paintwork, aggressive front end and gorgeous interior drew us in, as did the lowered stance, BBS split rims, the chunky bumpers, 935-style door mirrors and slim rear roof spoiler.

The car belongs to South African petrolhead, Fabian Vettinger, who told us the majority of work was carried out under the watch of the orange road racer’s previous owner, Victor Ferraz, a Porschephile with a string of heavily modified 911s to his name. “I wanted to have fun with an air-cooled 911 at the track,” Victor recalls. “I was keen to participate in gymkhanas and sprint events organised by Porsche Club of South Africa. Consequently, I bought a 1986 Carrera 3.2 from a seller in Cape Town. The car was whaletailed, equipped with a 915 gearbox and finished in grey. I paid for my new toy unseen, which wasn’t necessarily the wisest move, but I had a good feeling about what the owner was telling me, a hunch vindicated when my new Porsche proved itself to be in excellent condition thanks to the care of doting previous owners.” As if to prove the point, the seats were needlessly being protected by sheepskin covers.

The perfect presentation of the Carrera’s cabin furniture was a bonus, but not a deal-breaker. “I knew they’d be ripped out by Ludi Kitsman, head honcho at Boksburg-based Porsche racing specialist, Classic Connection,” continues Victor. “A small company with a stellar reputation for restoring and updating air-cooled Porsches, it was Classic Connection who I entrusted to convert my newly acquired G-Series Carrera 3.2 into a track-friendly road racer.”

Ridding the car of bulk, Ludi ditched the pristine seats, air-conditioning equipment, the spare wheel and whatever else wasn’t needed. “The intention was to make the car rough and ready for the track, with the addition of Porsche script stripes for a bit of fun,” shrugs Victor, “but when Ludi removed the engine and completely stripped the interior, I realised we had the perfect opportunity to ramp things up a notch. That’s when I suggested a switch to the GT3 RS colour, which, in turn, led to an unintended bare metal respray.”

PARTS OF THE PUZZLE

The seventeen-inch BBS Le Mans wheels were sourced from the USA and promptly refurbished, the centres powdercoated satin black. Offering bigger room to fit bigger anchors, they now wrap around a Brembo GT brake kit with six-piston calipers at the front and four at the rear. The rims were fitted with Bridgestone Potenza RE55 semislicks in readiness for track work, with 205/50 and 255/40 profile selected for the front and rear hoops respectively.

Koni Sport adjustable dampers were planted in each corner, complemented by tie-rods and torsion bars lifted from a 930 Turbo. The ride height was then dropped 50mm before bespoke geometry was dialled in, with a bump steer kit and strut brace from Porsche parts specialist, Elephant Racing, helping to focus handling.

Fibreglass IROC-style bumpers — the front add-on with intakes filled by Hella LED fog lights — work with the aforementioned 935-inspired door mirrors and roof spoiler to promote the racing theme, which is indicated by the addition of the letter R to the cool Carrera’s rear nameplate. “Ludi completely rebuilt the engine, adding new pistons, camshafts, valves and a custom stainless steel exhaust system,” stresses Victor, keen to impress upon us the fact his car has a decent amount of ‘go’ to match its obvious ‘show’. “To further reduce weight, the heat exchangers were deleted,” he adds. The finished pipework was ceramic coated to keep toasty temperatures at bay, while a freeflowing silencer, a custom oil cooler and a Wevo short shifter joined the party. “The Wevo item has vastly improved the driving experience,” Victor explains. Renowned for the effectiveness of its pre-964 911 short shift kits, the company’s products are designed to promote rapid and more accurate shifting during spirited driving, both on and off the track. Lightweight Sparco racing buckets replaced the tidy factory seats, with matching safety harnesses, a half rollcage, lightweight carpet and bespoke lightweight door panels (complete with aluminium fasteners and 964 RS door pulls) contributing to the shedding of an estimated 120kg. Aluminium Porsche racing pedals and an Alcantara-trimmed MOMO steering wheel complete the cabin’s transformation to semi-race specification, with an Alpine head unit reminding us Fabian’s ride still needs to perform ably as a comfortable road car. To that end, the factory sunroof and electric window functionality have also remained in situ.

Eighteen months after the project started, Victor and his wife headed out on a short break to Dullstroom, a small town in the Mpumalanga province. “It was the first proper outing for the car following completion of the build,” he tells us. “The long, sweeping bends through the hills and valleys en route to our destination provided the perfect platform for shakedown of the newly appointed chassis gear. I was blown away by the sheer level of grip when navigating tight corners. The rear never stepped out, even when provoked! The Wevo shifter was also a game-changer, making me feel like a professional driver working my way up and down the gears in and out of the road’s many exciting twists and turns.” There was only one problem, and it’s one many GT Porsche readers will be familiar with.

“The completed car was too nice to use at the track! I was totally besotted and feared ruining the showroom-fresh Porsche I’d ended up with!” There was also the challenge of his neighbourhood’s rapidly increasing volume of traffic. “Gauteng is the smallest province in South Africa with the highest number of cars per square kilometre, a statistic that isn’t getting any better. Add to this the arrival of my first child, and I found myself appreciating my 3.2-litre track-friendly road racer more and more as an ornament in my garage. I knew I had to set the car free.”

FROM ONE TO ANOTHER

It’s difficult to part with anything you’ve poured your heart and soul into, but the blow is softened if the new custodian of your custom creation promises to cherish and care for your pet project. Better still if it’s a Porsche prepared for track work and the new owner is committed to using the car as intended. “It’s producing close to 250bhp,” says Fabian, who bought the awesome air-cooled classic through local sports car broker, Lemon Garage. “It’s not the quickest Porsche in the world, but it’s no slouch.” A trip to the top of Signal Hill in Cape Town proves the point. Watching the sun come up over the South Atlantic Ocean and propelled onto the downhill stretch of road past Lion’s Head mountain, we’re firmly clasped in the Sparco seats, which are set so low in the car that you might as well be sitting on the floor. Some dexterity is required to climb into them, but once strapped in, a hand clenching the MOMO steering wheel and another on that wicked short shifter, feet find themselves planted on the racing pedals and you’re in another realm. The engine screams through the uninhibited exhaust, the note far deeper and more pronounced than expected. Power delivery from the 3.2-litre lump is smooth and progressive, the engine quickly whining to 5,000rpm, though throttle input is short and sharp due to the high number of twisties, each encouraging enthusiastic use of the Wevo kit. The downward slalom becomes choppy where the road surface ripples at its edges, but balance is restored to The Force by the bump steer system, which limits scuttle through the steering wheel. And before we know it, we’ve crossed over Camps Bay Drive (an exciting, bumpy road offering amazing views of mountain and sea) and the car is chasing up the side of Table Mountain. The engine howls at full chat, turn-in is quick, the brakes offer swift stopping power at the slightest touch and we have every confidence in the assured back end, which shows great composure, not once twitching, even through the tightest of bends at speed.

At long last, we enter the last stretch of mountain road, affording us a final stint of short throttle bursts, heavy braking, rapid cog swaps and swift rotations of the smooth steering wheel. It’s a visceral, exhilarating drive and one we’re thankful Fabian allowed us to experience. And who knows? He might even share photos of the day across his social media channels!

Below Mountain roads along South Africa’s Atlantic sea board provide a stunning backdrop for a fast-road blast. Above Cockpit retains just enough in the way of creature comforts to ensure civilised regular road use. Left Carrera 3.2 flat-six has been completely rebuilt alongside a stripped and reassembled 915 manual gearbox.

In 1984, the Carrera 3.2 was a much needed update for the 911 range following the expiration of the massive-selling SC. Reviving the Carrera nameplate for the first time since 1977, the Carrera 3.2 featured a punchier engine, which Porsche claimed shared few parts with the SC’s three-litre flat-six. New brakes, electrics and suspension equipment marked the Carrera 3.2 from its predecessor. Production continued until the arrival of the 964 in 1989.