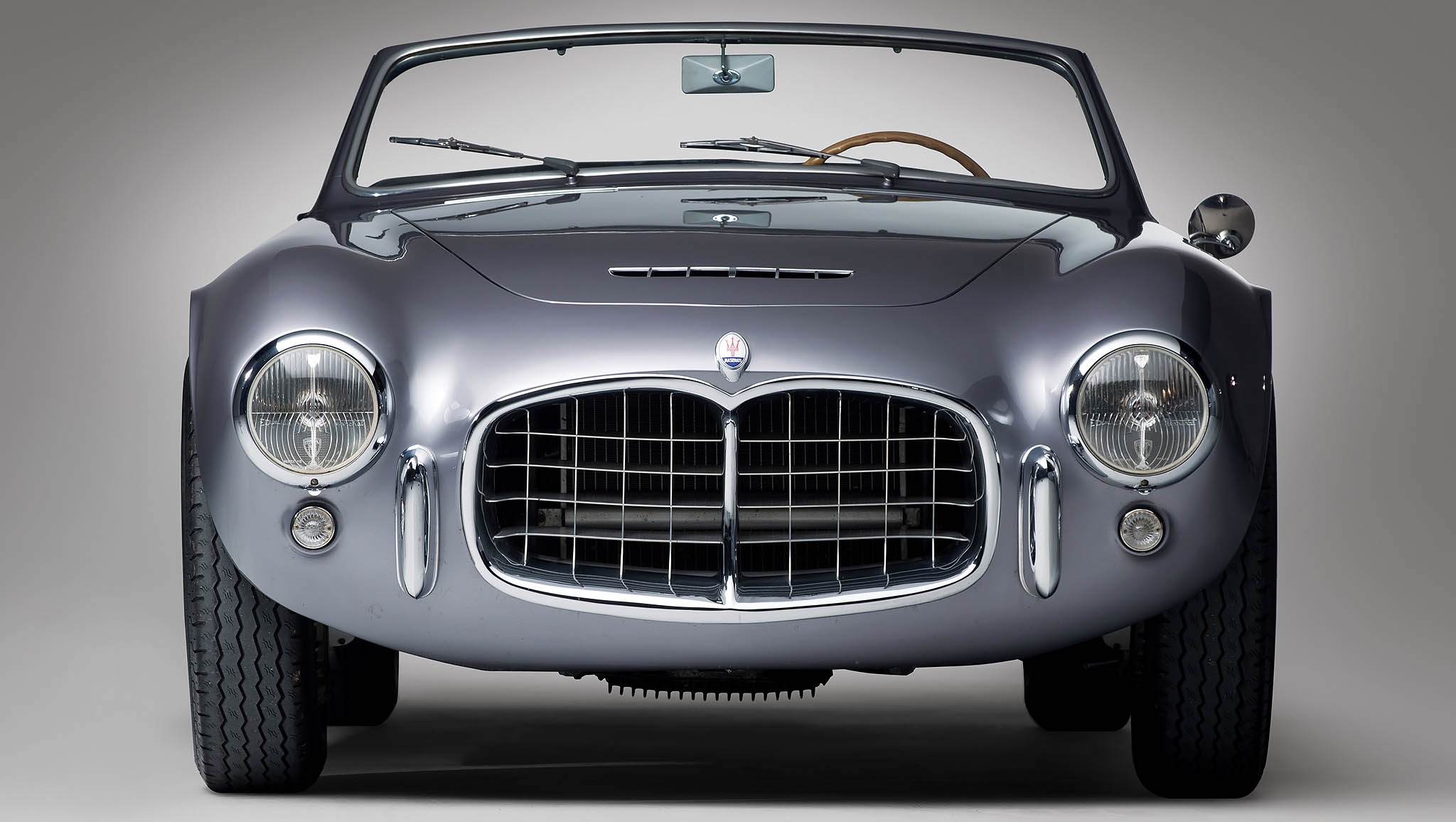 Maserati A6G/2000 How a stunning Spyder was revived. A long-lost Maserati Spyder that had a triumphant return to form. Maserati had a grand tradition with the Torinese coachbuilder that kicked off with the A6G/2000 Spyders. Mick Walsh investigates these sublime soft-tops. Photography Darin Schnabel/Rm Auctions.

Pietro Frua is one of the unsung heroes of Italian design. As well as an impressive record of automotive styling that ranged from such popular glamour as the Renault Floride to sleek exotics headed by the Maserati Mistral, his creativity could even switch to electric ovens and kitchen units. This underappreciated, Raymond Loewy-like talent also conceived a monocoque scooter. A modest, quietly spoken but always jovial character, Frua is best linked with Maserati, an association that began in the early ’50s when the Orsi family decided to market a series of high-performance 2-litre road cars rather than concentrate on motor sport.

The most exotic of the 18 bodies hand-built at Frua’sTurin-based carrozzeria clothed a sensational trio of Spyders based on the short-chassis A6GCS. The competition-derived frame, with double-wishbone independent front suspension and a live rear axle – powered by a rorty 150bhp twin-cam straight-six – inspired Frua, who enveloped it with a lean, compact form that brilliantly enhanced its racing pedigree.

Signature details, from the aggressive concave lattice grille to the low windscreen, tight-fitting cockpit and shapely tail, all combined to give it mouth watering elegance. Neat bumperettes, a chrome flash and bold side exhausts identify the first of the trio, chassis 2054. Taut and shapely, light and muscular, this compact convertible is no bigger than an MGB, yet has the presence of thoroughbreds twice its size. Frua’s masterful styling made a dominant feature of the 16in Borranis that fill the wheelarches, which later captivated a young Giorgetto Giugiaro.

Like many great Maseratis, the first of the Frua roadsters was sold via the Trident marque’s key dealer Guglielmo Dei in Rome in ’53. This lithe Latin machine was inTexas by ’55, where Bobby Burns competed in club events around the southern States, including at Mansfield, Louisiana.

He soon removed the bumpers and hood to lighten the car while the front end – even the lamps – was painted yellow over the original red. A tornado hit the workshop where the car was stored in ’56, and the damage prompted Burns to remove the touring bodywork and instruct his mechanic to construct a new barchetta racing style body. After several outings, including the Fort Sumner Road Races in New Mexico and the Eagle Mountain Lake National Guard Base, Fort Worth where it was driven by young Texan Hot shoe Jim Hall, the car mysteriously vanished. According to German Maserati guru Walter Bäumer, the chassis is rumoured to survive with a different number under an A6GCS in Italy.

Thankfully, the original Frua coachwork resurfaced and, in February ’57, it appeared in the classified adverts of Road & Track magazine with Texan Kurtz Smith. ‘Maserati 2000cc Gran Sport body by Frua, complete with top and Tonneau cover. 91inch wheelbase, track 48inch front, 51½inch rear. Body steel and aluminium. $550 FOB,’ was the listing and it eventually sold. The beautiful Latin body was fitted to a Triumph TR3 chassis at some point in the early ’60s, and again disappeared until the mid-1980s when it dramatically came to light after years in storage.

When you’re the largest Maserati parts distributor in America, there’s a good chance that you’ll unearth a few exciting projects. Such was the case with Francis Mandarano, better known as the founder of Concorso Italiano.

“I was talking to Maserati enthusiasts all over the world and I got this call from a guy in Las Vegas,” recalls Mandarano. “He’d bought this mystery car and wanted to know what it was worth. It turned out that he’d acquired the contents of a storage unit – they auction them off if the bills run unpaid – and the unseen stash included a little red sports car. I asked him to mail photos – this was long before e-mail –and eventually a pack of Polaroids arrived in the post. I vividly remember opening the envelope and instantly recognising the car. ‘Oh my God, it’s a Frua Spyder,’ was my reaction and, after a quick look in my reference books, I knew without question that it was 2054. I phoned him back and went straight to the bank to with draw some $100 bills and cheques, booked flights and flew out.”

You can just picture an excited Mandarano impatiently gunning his rented car through the suburbs of the Nevada gambling capital, and finally arriving at the house to see the tatty roadster sitting on the driveway. “It was a barn-find, but the body and interior were amazingly complete,” says Mandarano. “The red paint was original. Even the top and glass were good. Just a bumper was missing, and it had clearly been driven with the Triumph chassis and engine. We did a deal and I had it loaded on to a flatbed.”

Within a week it was back home in Seattle, but the project was too much for Mandarano who, after a few months, advertised it for $26,500. These early Frua Spyders are highly coveted, and the Anglo-Italian hybrid was quickly snapped up by Sam Mann, a multiple Pebble Beach-winning collector with immaculate taste. “I thought of buying it as a somewhat charitable deed – saving from oblivion a beautiful object,” he explains. “I just couldn’t let it go.” Other individuals, including Bäumer, rued their missed opportunity. “I thought too long about what to do with the body, which I soon regretted,” the German confesses.

Mann then had the dilemma of how to restore the Maserati. Finding any trace of the original chassis proved fruitless and, rather than fabricate a replica frame and build a new engine, he decided to buy a ’54 A6G/2000 Allemano coupé as a donor. The rebuild was begun by Nino Epifani in Berkeley, CA, who stripped the Allemano body – one of just 21 built – and shortened the chassis to fit the Frua Spyder. The part finished project was then transferred to Wayne Obry of Motion Products in Neenah, Wisconsin, where most of the work was carried out. Rather than the competition version of the Gioacchino Colombo-designed A6GCS ‘six’, the Frua car is now fitted with the ‘road’ engine devised by Vittorio Bellentani for the Allemano.

The unit has an alloy block and head, though the main difference is the switch from gear-drive for the dual-overhead cams to triplex timing chains. It was devised for a racing single-seater and was deemed too noisy and complex for the closed road car. Dry-sump lubrication was changed to a deep-finned alloy ‘wet’ sump for the road cars, which released a little room in the boot where the oil tank had been. These refinements had little effect on the spec, which featured optional 12-plug head and three Weber 40DC03s giving a feisty 150bhp and mighty performance.

Obry’s shop did a superb job of restoring the hand-beaten body that Mann decided to repaint a light silver lilac. The bucket seats and doorcards were retrimmed in blue hide with royal purple carpets to enhance the subtle aesthetics. The body-coloured dashboard was fitted with rebuilt Jaeger gauges and a handsome Nardi three-spoke wheel completed the sporty cockpit.

Appropriately, the restored Frua Spyder made its debut at Concorso Italiano in 2003 – where its immaculate condition and exquisite coachwork garnered it the trophy for Best Maserati. Mann entered it for several other show events, but his main intention was to restore 2054/2190 for driving. His highlights included two runs on the Colorado Grand and a California Mille.

To further improve the experience, Mann had a five-speed Alfa Romeo gearbox fitted. With a chassis conceived for Italian hillclimbs and the legendary Targa Florio, the superb handling, precise steeringand dramatic performance of the A6G make it a fabulous ’50s sports car.

After a decade, this gorgeous machine is back at Monterey in August, where it will roar over the ramp at RM. The same sale also features a competition A6GCS, 2053, which would make the dream pair. Imagine arriving at the Goodwood Revival in the glamorous Frua Spyder and Racing the Fantuzzi-bodied barchetta into the dusk in the Freddie March Trophy.

A limited edition of three

All three of the A6GCS Spyders bodied by Frua survive, and are guaranteed to turn heads wherever they are seen. They have detail differences but the most distinctive features of the later pair are the pointed front bumpers and conventional underbody exhaust systems. The second, chassis 2109, was completed at Frua’s Turin workshop in July ’55 – based around a pure A6GCS competition chassis and engine, including gear-driven camshafts and dry-sump lubrication. Very much a racer in haute couture, the car was dramatically painted rosso with an ivory flash across the bonnet. Complete with coordinated white trim, 2109 featured in a ’55 Maserati factory brochure and was selected by the organisers of the Italian Grand Prix to open the Monza circuit (top left) with president Giovanni Gronchi riding in the passenger seat. Like the other two, it found its way to the US where it was bought by current owner Thomas Mitter in the late ’80s. It was altered to black with white flash and red leather during the rebuild. 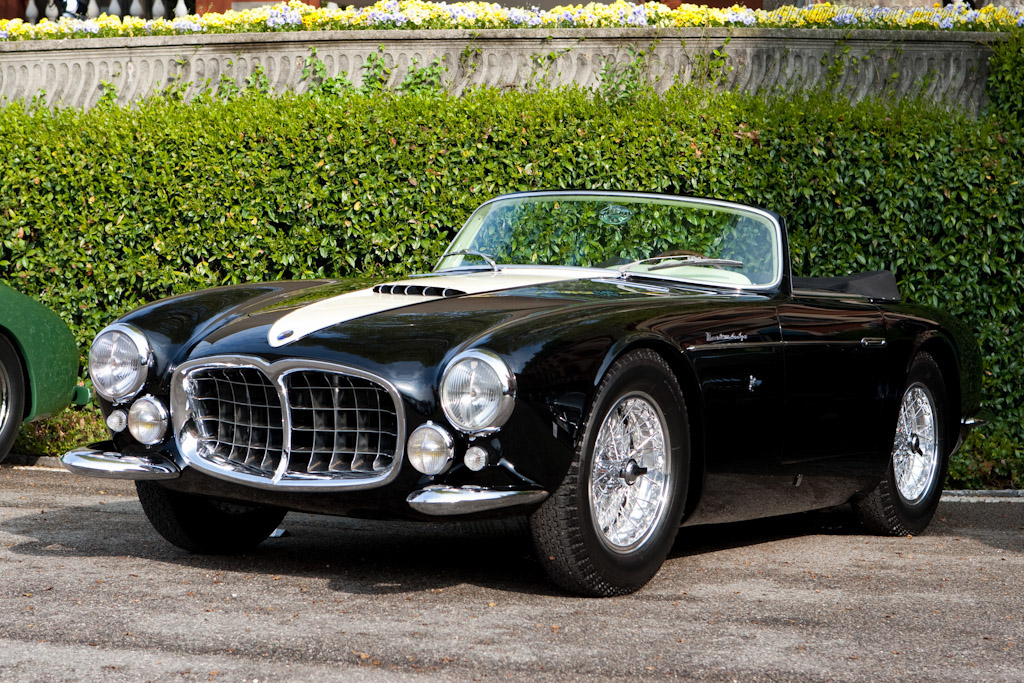 The last car completed was chassis 2110, which wasn’t signed off until ’56 and was easily identified by its unique white finish with black bonnet panel and black hide. With a price-tag of $10,450 – the costliest production 2-litre model – the 130mph dropheads were exclusive and hard to sell.

Spyder 2110 was prized by various American owners including Allen Powell of Mishawaka, IN, who reversed the colour to black with a white panel. Later custodians numbered Bob Rubin, owner of the now long-closed Bridgehampton circuit where, after restoration by Chris Leydon, the Maserati ran at private events. In later years it was fitted with a full-race, gear-driven A6GCS motor. In ’97, the car was involved in a serious road crash and was rebuilt before being auctioned by Bonhams at Quail Lodge in 2002 where it sold to Texan John F Book out for $552,500, a record for a 2-litre Maser. It returned home in 2010 to wow the judges and public at the prestigious Concorso d’ Eleganza Villa d’Este (left).