From the cockpit – propeller-powered vehicles 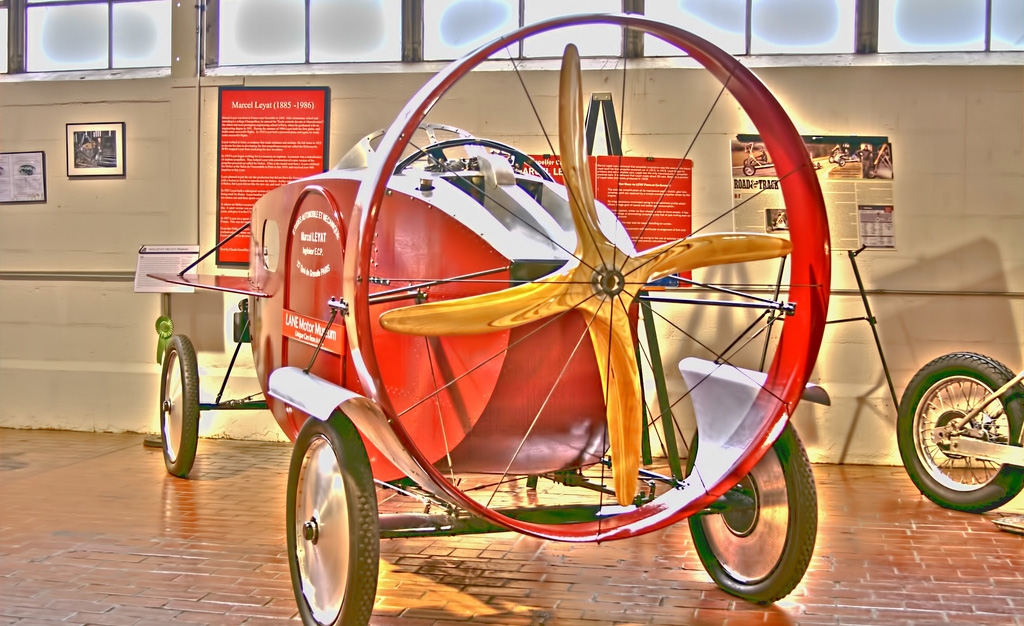 From the cockpit. When it comes to collecting eccentric cars, few can match Jeff Lane. Propeller-powered vehicles are a special weakness of this Nashville-based enthusiast, and for years a vintage Leyat was high on his must-have list. Of the c30 built, only two of these wingless wonders survive and there’s no chance they’ll be sold. The only option was to build one.

After examining, measuring and photographing every detail of Jean-Francois Bouzanquet’s surviving saloon, however, the task for Lane’s Czech-based restorers in 2004 looked impossible. The American’s frustrated enthusiasm eventually motivated Claude Gueniffey, president of Les amis de l’Helica, to drive out to the former country home of aviator/inventor Marcel Leyat. “No drawings had ever been found and Leyat had moved out of his Paris workshops to Meursault, where he lived to 1945,” says Gueniffey. “But when I asked about the attic, the new residents said that no one had ever been into the roof because of the cold outside hatch.” He requested permission to explore and, with a long ladder, eventually forced the door open. All he could see was a stash of rubbish in the far corner: “The dustypapers turned out to be 200 original drawings, many of Leyats plus others featuring his visionary aircraft. There were also boxes of Leyat parts.” The first call was to Lane, who was equally excited by the discovery, and immediately the replica build was back on.

When the Retromobile organisers offered space to celebrate this year’s centenary of the Leyat, the group pulled together to produce one of the undoubted show highlights, with five of the bizarre twin-cylinder machines including Lane’s latest recreation of the 1914 Helicocycle. In this, the ‘crew’ sits inside the body, with the engine above the pilot. This early model also steers via a single rear wheel, a feature that returned for Leyat’s successful 8hp record car, which clocked 170kph at Montlhery in 1927. Wings were later fitted and the Leyat flew.

Watching an amazing early film of designer/ constructor Leyat testing his roadster model around Paris, with his trusting wife braving the rear tandem hammock-style seat, it’s fascinating to see the reactions of pedestrians and other road users. Lane reports that the biggest danger when using his replica in America is fellow drivers, who race to catch him and take photos with mobile phones. “You know they’re looking at you, not the route ahead,” he says. In the historic footage, taxis and even a cyclist give chase as the Leyat blows itself down the Champs Elysees. While doing a U-turn, the inside-rear wheel lifts by 6in but Marcel seems unconcerned. “It’s a problem if you turn too quickly,” says Lane, “but you don’t notice because the body also banks over.”

Among the original parts at Retro was a brake bar and pedals, mounted in the remnants of a body.

“It’s all that’s left of a Leyat owned by Monsieur Carmaniolle de Meursault,” explains Gueniffey. “He was from Burgundy and had a reputation for driving fast. Story has it that he thought the ride too harsh, so softened the suspension with tragic results. It was the only fatal accident.” Leyat eventually gave up his automotive and aviation pursuits, switching to musical instruments. As unconventional as ever, he redesigned the keyboard for a mechanical-type piano.

‘After it clocked 170kph at Montlhery, wings were fitted to the 8hp record car and the Leyat flew’

The dedicated Amis de l’Helica had hoped to reunite the two surviving Leyats at the show, and Bouzanquet happily committed his fantastically original saloon. After lengthy negotiations, however, there was no luck in persuading the Musee des Arts et Metiers to release its open model. To complete my trip, I had to call in at the 19th-century conservatoire north of the Pompidou Centre. When I finally found the timewarp machine, it was instantly clear why the museum was reluctant: it’s parked high on a steel-and- glass structure within a church annex, making removal a major challenge. But I’m sure Leyat would be proud that his creation now keeps company with Louis Bleriot’s cross-Channel 1909 monoplane, supported from the rafters in this magnificent space. It’s a dramatic, Terry Gilliam-esque display, whose €6 entry is the best value you’ll find in the French capital.