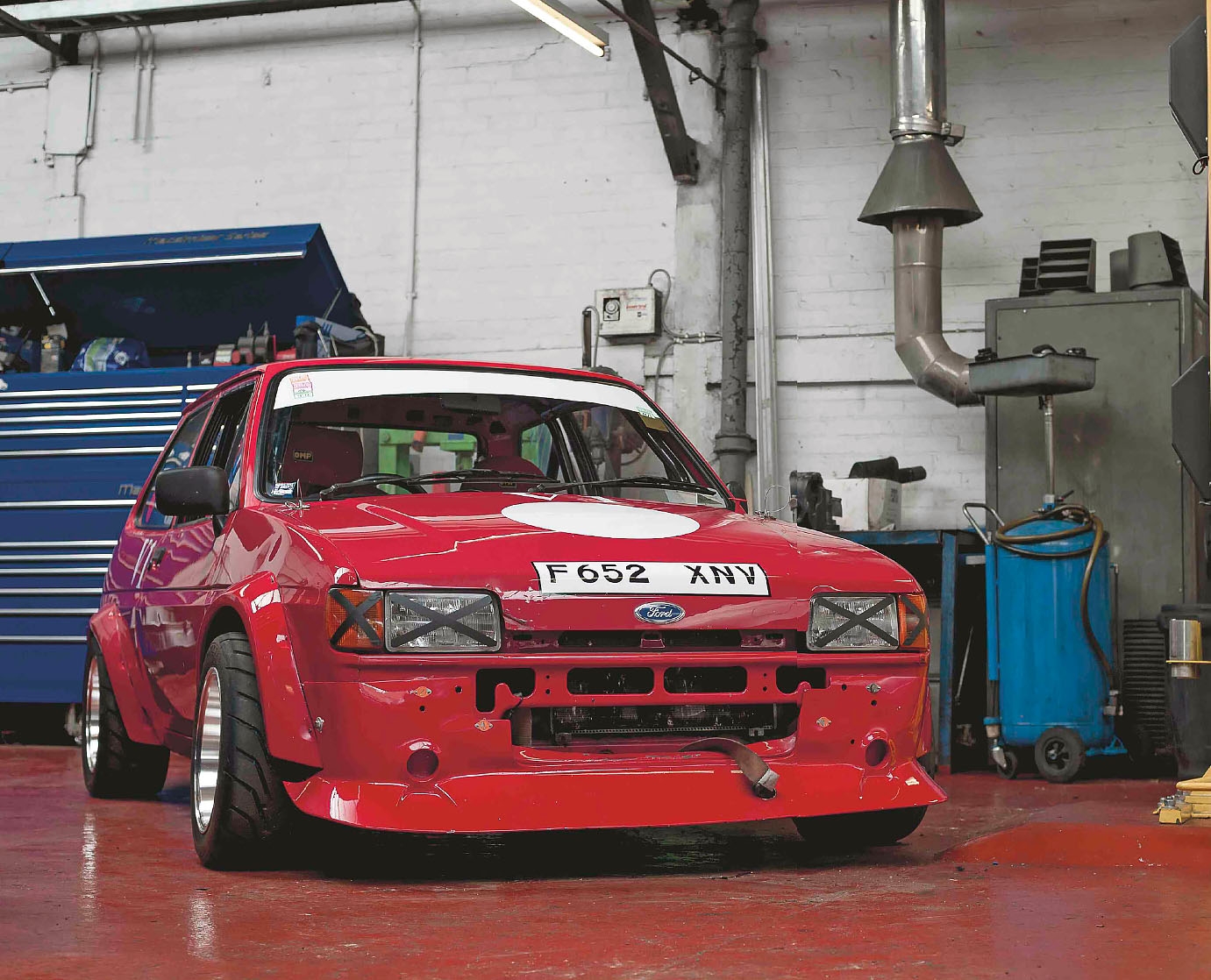 That was pretty much our impression when we were first in the presence of Eric Falce’s earth-shattering little Fiesta plaything. Fiesta De La Vida Is it a bird? Is it a plane? Well, no, it’s obviously a Fiesta. But it’s a pretty damned naughty one…What the hell’s that noise?’ asked Drive-MY photographer Chris at our Brands Hatch trackday last year. Something akin to a low flying aircraft kept buzzing down the start/ finish straight, shaking the ground in the pits and making everybody’s ears pop. When the source of the sound turned out to be a relatively innocent looking F-reg Fiesta, we just had to find out more…

Ford’s second-generation Fiesta probably means one of two things to you: it’s either an aspirational hot hatch that you grew up hankering after and is now rapidly disappearing into the annals of folklore, or it’s the car you and your mates learnt to drive in – something that your mum used to pootle to the shops in, with beaded wooden seat covers and a Feu Orange air freshener. If you’re in the former camp, you’ll see it as a cheeky Essex upstart with a chunky 1980s aesthetic; for the latter, it’ll forever be seen as something frugal and basic, remembered fondly but not lustfully. Either way, it’s high time for a fresh reappraisal of the model. While it’s easy to leave the mkII Fiesta languishing in that part of the brain where we fi le ‘old stuff, but not that old’, it’s important to remember that the first examples hit the forecourts thirty-one years ago, while the newest possible one you can find today was screwed together back when The Bangles and New Kids on the Block were on the radio; the year that Del Boy fell through the bar, and we were all getting excited about this clever new gadget called the Game Boy. Fiestas are getting on a bit, aren’t they? 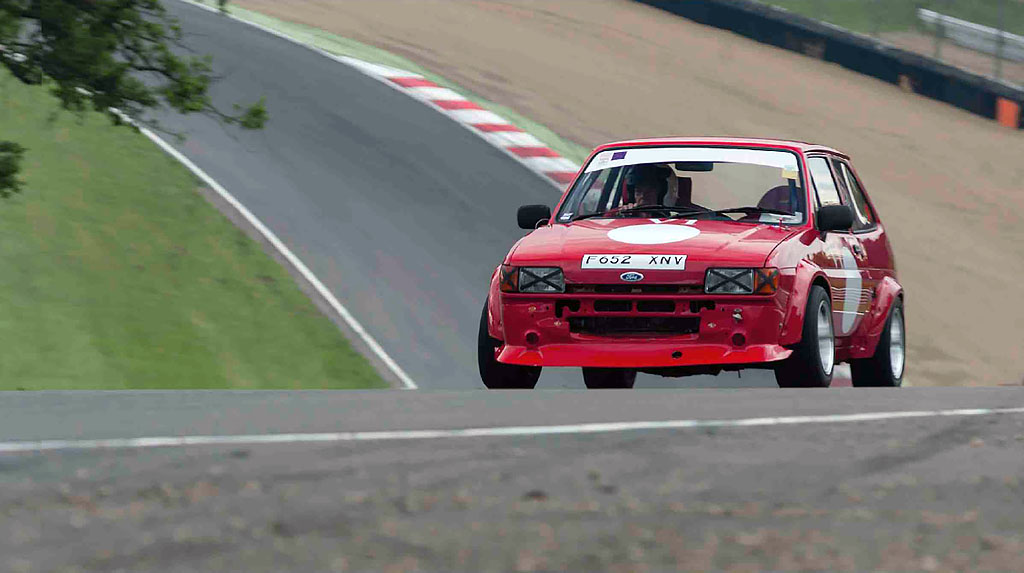 Speaking of getting on a bit – and I mean that, of course, with the utmost respect – we find that the guy behind the wheel of this particular Fiesta, Eric Falce, is seventy-five years old. Nothing shocking there, you might think – after all, 75 has been the average age of the mkII Fiesta driver ever since it was launched, hasn’t it? Aha, but there’s another dimension to consider here: Eric transcends your basic and naïve perception of the linear passage of time. Sure, his driving licence may say he’s of venerable chronological advancement, but his smile is a spritely seventeen years old. And so’s his throttle foot…

Eric’s motoring history is long, varied, and tremendously impressive. He’s raced at pretty much any circuit you care to name, rubbed shoulders with the stars, swished between the trees at Crystal Palace, knows Spa-Francorchamps like the back of his hand, and spends more time at Brands Hatch these days than is frankly healthy. His veins are full of Castrol R. He stirs his tea with a spanner. And once you get him talking about his racing exploits, it’s like pulling a keystone from a Roman arch – all of the facts come tumbling forth in an irreversible avalanche of entertaining anecdotes.

So what is such a character doing in a souped-up version of the budget hatchback your grandma used to drive to church? After all, this is a man who races a replica D-Type and drives a Jaguar XK150 to work…

‘It all started years ago,’ he says. ‘Through word of mouth, I heard about a friend of a friend who had this Fiesta sitting on his driveway. It wasn’t going anywhere, and we’d been looking for a project to turn into a track car, so we went to take a look. It turned out to be solid and usable, so we brought it home to see what we could do with it.’ At this point, it’s worth explaining the ‘we’ that he refers to here: EPF Autoservices, Eric’s eponymous garage business, sits in the heart of Sidcup – the sort of place that services, fixes and MoTs modern motors as its bread-and-butter, but is clearly run by a bunch of old-school enthusiasts, as evidenced by the cool old cars they build for fun. The Fiesta is one such build. Dave Chapman, the fella who rolled up his sleeves and got stuck into the car when it first arrived, takes up the story: ‘It had a CVH in it when we got it, running a downdraught – we swapped it to 45s and ran it for ages like that. It’d had a few bits done to it already, so initially it was just a case of pumping up the tyres and seeing what it could do! We basically honed it on a trackday-by-trackday basis, it was a case of evolution rather than revolution. It ended up painted blue and orange, with a custom front spoiler fitted, we were making it better and faster all the time… but then there was, er, a mishap a few years ago’ [there is much sniggering in the workshop at this point, and one employee who we won’t name makes a hasty exit] ‘which meant we had to reshell it. 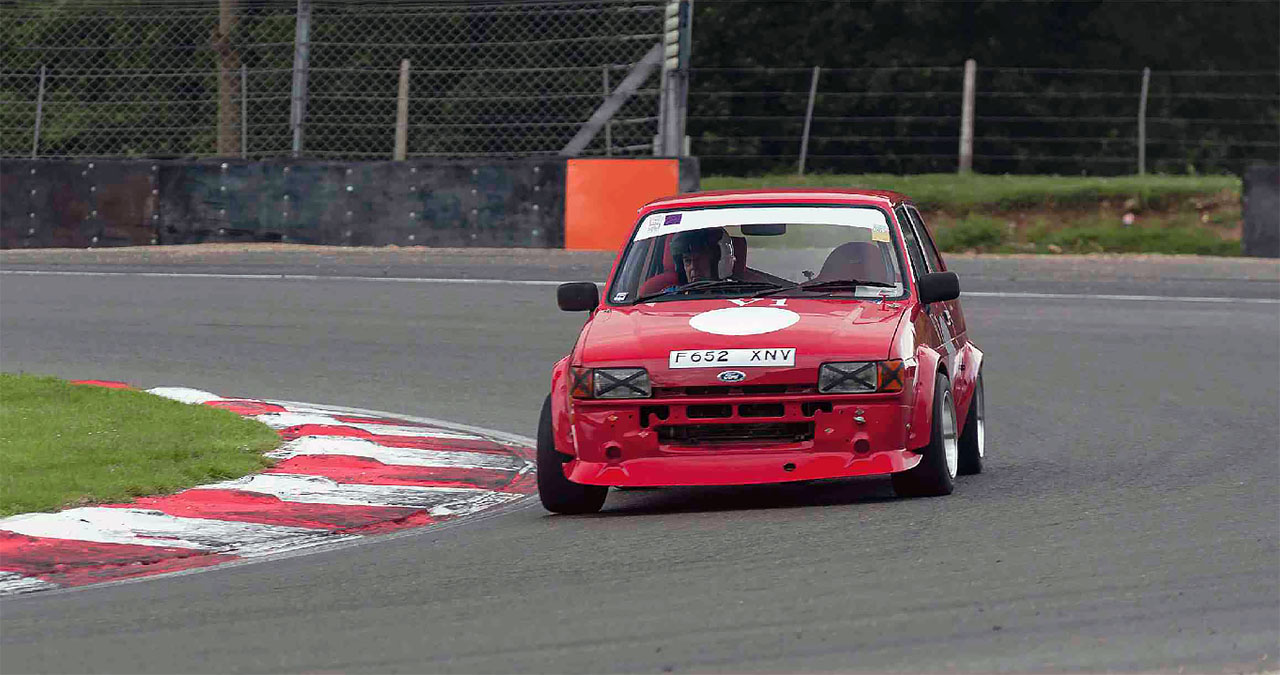 So we decided to change a few things…’ By this point in the life of the project, Eric was rather smitten with the little fi ghter, so there was never any question of calling it a day and writing it off. The hunt was on for a rustfree shell to swap all the bits into.

‘For the most part, that was actually a piece of cake,’ says Dave. ‘But because we had the thing torn to bits anyway, we decided to do something pretty major to increase the performance.’ This involved a series of protracted discussions with HT Racing, who Eric’s had many dealings with over the years, to build a fruity Zetec for the car. As is their modus operandi, the spec of the engine is shrouded in mystery and intrigue (after all, the world of engine building centres around not revealing your secrets to rivals…), but we’re looking at an all-steel build with hot Kent cams, juicy Jenvey throttle bodies, and peak power of 218bhp at 7,500rpm. In addition to this, it sounds utterly monstrous – ‘I’m always getting black-flagged for noise, it’s just a case of pushing it till someone objects,’ says Eric with an impish grin – and, working in conjunction with a Quaife ’box and diff, it makes for pretty formidable performance.

‘It’s running Emerald management,’ Dave reveals. ‘We had it mapped by Dave Walker, and it runs faultlessly – and the power and the noise are pretty awesome!’

Dave is just as enthusiastic about the retro Ford as Eric is, having been a blue oval man for as long as he can remember. ‘I bought my first mkII when I was sixteen, for a tenner!’ he laughs. ‘That was the first engine I ever rebuilt, actually – it still starts on the button, and I’ve still got it in storage. But it’s quite far down the queue of projects now; I’ve just bought a tidy series two RS Turbo, as they were the cars all the cool kids had when I was growing up, and I’d love a mkII Escort at some point. But we all feel pretty affectionate toward this little Fiesta, all for our own reasons. Particularly Eric, he’s a maniac when he gets in there!’

It wasn’t just the underbonnet area that received attention during the rebuild – Dave took the opportunity to broaden the footprint somewhat as well. You’ve presumably noticed the wide motorsport arches, which are entirely necessary considering that the car’s now running Superlites that are 8” wide. These are shod in sticky R888s – the perfect complement to those flawlessly efficient Gaz Gold coilovers. ‘It’s still running the stock brakes for the moment…’ begins Eric; ‘Not for long though!’ Dave chimes in. ‘The stock setup is good for up to about 190bhp, but after that point you find your foot’s trying to go through the bulkhead! We’ve got a set of Wilwoods to go on there soon, which might just about squeeze inside the thirteens…’ 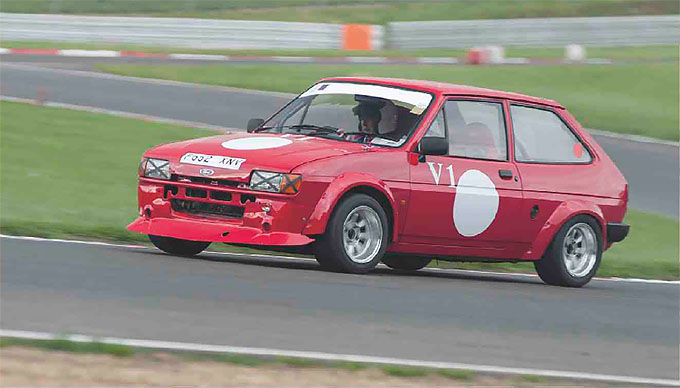 Their enthusiasm for honing the details is infectious, and you can see how this approach has manifested itself in the Fiesta’s interior – you’ll find nothing more than a set of OMP buckets with Sabelt harnesses, a robust bolt-in ’cage and a sweep of RMD gauges. ‘It’s mainly used for trackdays,’ Eric confirms. ‘We do about a dozen or so a year. It’s really handy having Brands Hatch nearby and we take it there a lot, although we take it all over the place really. Anywhere I can get away with it!’

There’s a boyish twinkle in his eye as he discusses past exploits and future plans. Snapper Chris leaps up and down with excitement as Eric practically insists he travel with him to Spa for a few laps in the Fiesta later in the year. ‘I’ve driven a lot of fast cars in my time – race cars, sports cars, track cars, you name it,’ Eric says, ‘but this is by far the most fun. You chuck it into a corner and it just goes, it’s an incredibly grippy, revvy thing, very much at home on the track, hugely involving. It plasters a grin all over my face every time I drive it.’ So it’s a pretty amenable and friendly thing to drive, then? ‘Oh no, it’s an absolute pig!’ he laughs. (‘And it’ll bite you in the backside if you do something wrong,’ Dave interjects.) ‘But that’s part of the fun – it makes you work for it, but the rewards are endless.’ Indeed, such is the fun that Eric’s having in this tangy little hatchback that he’s considering making a few minor alterations to make it road-legal, so that the flamespitting merriment doesn’t have to just be confined to the track, but can open itself out into the Kent countryside. And that should raise a few eyebrows – imagine him getting pulled over by a rural copper after he pops and crackles by at full tilt. ‘Who do you think you are, Stirling Moss? Oh, wait, you do actually look a bit like him…’

The Fiesta may seem an unusual choice for a man with Eric’s decades of experience, but the more you think about it, the more it makes sense. Both he and the car are growing old disgracefully, refusing to grow up, causing a bit of trouble, and just getting on with the task of enjoying life. We could all learn a lesson from that. Everything you’ve heard about old dogs and new tricks is a load of hogwash.