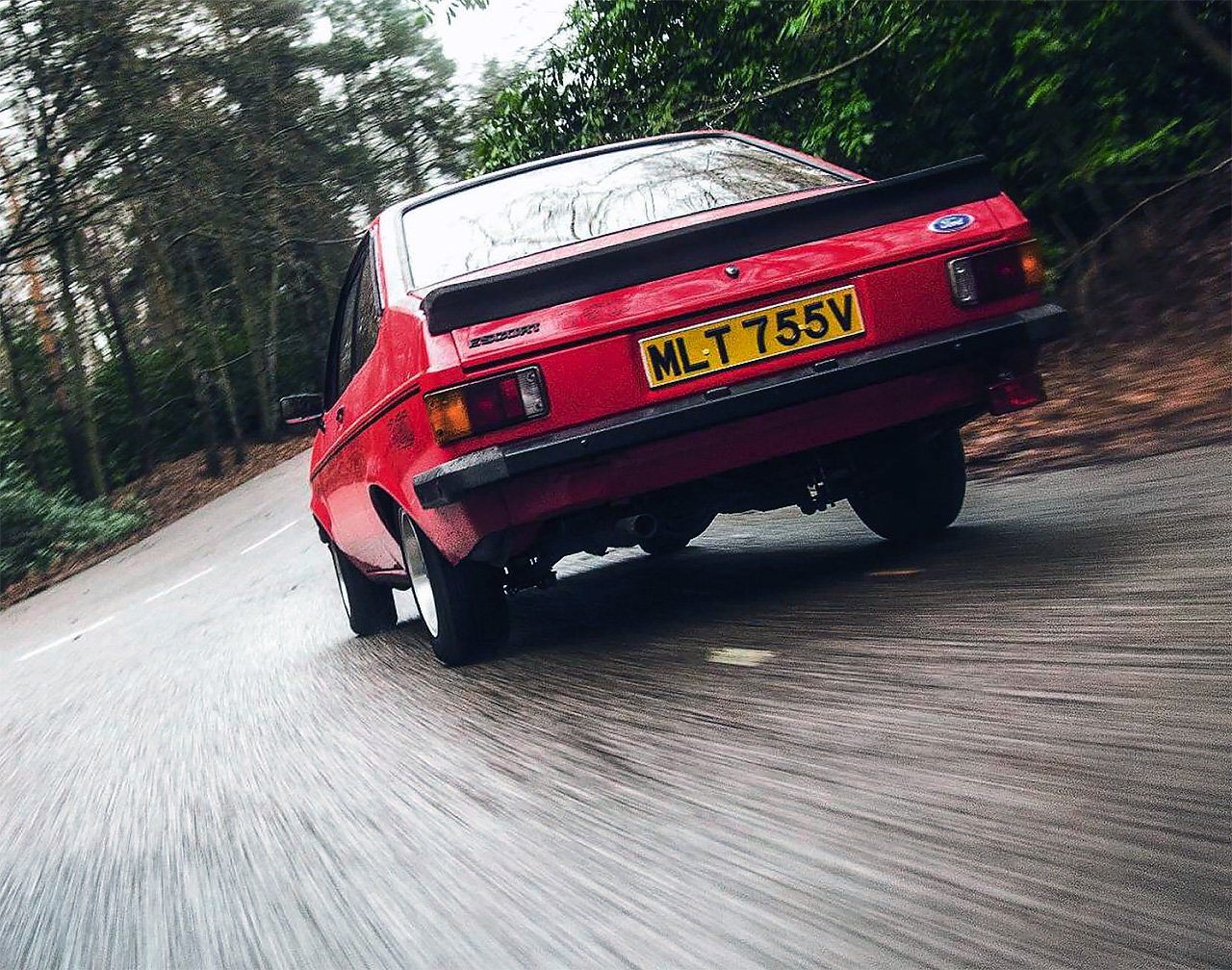 Ford Escort RS2000. ‘It’ll misbehave with glorious predictability’. Russ Smith, Assistant Editor. In the car culture of late-Seventies Essex, where I was an impressionable teenager, the RS2000 was a chariot of gods. If you had one, you were the boy… and could probably also dance like Travolta, had a trendy haircut that wasn’t done by your nan, and not only had a girlfriend but one who made your mates envious.

Ford’s transformation of the dull MkII Escort into a boy-racer icon was a marketing masterpiece that did a good job of delivering on its promise. The droop snoot on its own was a masterstroke that transformed the car, especially in profile, and worked perfectly with the boot-lip spoiler and four-spoke RS alloys, possibly the most- nicked wheels in motoring history. What’s more, the RS2000 could regularly be seen having its engine gunned and tyres squealed in The Professionals – and trust me, in 1978 nothing was cooler than that.

So what has happened to the RS2000? Why has it been largely ignored in the current market boom? In the past five years prices have risen only £500 or so, to about £12,500 for a good one.

If that doesn’t sound so bad, put it in the context of how much the values other sporty Escorts have flown up in the same period.

The RS2000’s spiritual predecessor, the MkI Escort Mexico, has jumped about 60 per cent and now overshadows the RS. And the rare but ultimately disappointing MkII Mexico has almost doubled in price, to the point where it now rubs shoulders with its more powerful and pointy-nosed big brother.

The only conclusion that can be drawn from this is that the RS2000 is probably underpriced in the market and due for some serious re-evaluation. And that’s why it’s here, with a small nod to all the teatime reruns of The Professionals on ITV4.

In common with all rear-drive Escorts the RS2000 is a hoot to drive, but made more so by having the most torquey engine in the range – all 119lb ft of it, which is enough to break the rear tyres loose on demand. With stiffly sprung basic-issue MacPherson struts at the front and leaf springs at the back the car will misbehave with glorious predictability, all to the tune of a ‘Romford Nights’ snarl of tuned four-cylinder with not quite enough exhaust silencing.

Okay, these days the top speed won’t impress anyone, but who does 112mph anyway? Of more relevance is the 0-60 time, which is perfectly respectable by any hot saloon standards. And the RS is one of those cars that happily always feels like it’s going faster than it is.

The only complaint I can deliver from the comfortable, supportive and racily laid-back Recaro seat (complete with iconic ‘fishnet’ headrest) is that it was obviously built with tall blokes in mind. At 5ft 7in I feel a bit like a 12-year-old sitting in Dad’s car for the first time, struggling to see out properly and with the steering wheel boss perfectly aligned with my nose. If I bought one, extra bracketry would be needed to raise the seat, but having such thoughts doesn’t help today.

That aside, an RS2000 is easy to live with. You won’t have your trousers taken down every time something goes wrong because the world is full of Ford specialists and mechanical parts are freely available with mass-production prices. Even a full Pinto engine rebuild shouldn’t cost far north of £1000, and body parts are now widely available. About as bad as it gets is £189.95 for a front wing – as they are unique to the RS2000 – but other parts such as sills, rear wheelarches and lower rear wing repair panels (the bit that rots) are all under £30 a go.

With an eye to future values, the best buys are those RS2000s that have escaped the modifiers’ touch. Good original cars should, and I believe will, become treasured.

Quentin on the RS

I really didn’t want to like this elderly fast Ford. Climb inside and, with that familiar brown and black late Seventies/early Eighties Dagenham cabin ambience, it feels like a Cortina. But the short-throw gearbox, lusty Pinto 2.0-litre four-cylinder motor and paper-cut-sharp turn-in soon made me smile. This is a sweet little rear-drive poppet that’s wonderfully connected to the road and you can see instantly why it became such a rally hero.

Simple and uncomplicated with a gloriously twitchy rear end, you revel in the total absence of any electrical or hydraulic assistance to the controls. It sounds buzzy and boomy but there’s a special dated charm to its total lack of refinement. And it’s good for 110mph.

Prices will follow the upward curve of Escort Mexicos and Lotus Cortinas and you’ll be pressed to find a decent MkII RS for less than £10k now. Really nice ones like our 42,000-mile test car are bound to keep on rising simply because there are so few original survivors left. Watch out for fakes and talk to the RS Owners’ Club before you buy. With so much current interest in Sixties and Seventies fast Fords the MkII RS is sure to be pulled up in the slipstream. This is a card-carrying motorsport icon and definitely worth buying now.