2020 Bentley Continental GT V8 Will a lighter under the Conti’s bonnet make it a better drive than the already-accomplished W12?

Not much gives it away; you really have to know your cars from Crewe. There are four oval exhaust pipe trims, compared with two fat ellipsoids on the W12, and a small chrome ‘V8‘ badge on the flank. Scant notification that this Continental GT is four cylinders down on the 6-litre engine, but perhaps, just maybe, one with a good deal more appeal to people like you and me.

With the original Conti the V8 model was the driver's choice, it may have lacked the perceived prestige of the big W12, but thanks to less weight over - or in the case of the original, beyond - the front axle, it was the more enjoyable car to drive. Will that still be the case with this second- generation car, which, after all, has as its basis a much more capable platform?

There are no surprises in the mechanical specification of the new Continental GT V8. While Bentley may claim it took a lot of work to get the calibration right on the 4-litre, twin-turbo V8, not least to get it to pass the latest WLTP regulations, the 542bhp and 568lb ft output figures look very familiar {think Panamera and Cayenne Turbos, and Bentayga V8). Of course, we all know this engine can make considerably more power than that, but to do so would position it uncomfortably close to the 626bhp W12, so 542bhp it is. Minor adjustments have been made to the suspension settings to compensate for the 50kg-lighter engine, but let’s put this into perspective: the V8-powered Conti still weighs 2165kg. It's a big slab of opulent grand tourer, whichever way you slice it, albeit one that can reach 62mph from rest in 4.0sec and top out at 198mph.

To put clear air between it and the W12 flagship, the V8 also gets less kit fitted as standard, offsetting its approximately 11 grand cheaper price tag at £148,800. The Dynamic Drive electrically actuated anti-roll bars are extra, for example, and 20-inch wheels are standard as opposed to the 21-inch items on the W12. However, our test car is in Mulliner Driving spec, which for an eye-watering £13,515 includes 22-inch rims, and some beautiful quilted cowhide inside. Bentley likes to view the two cars as appealing to different buyers, highlighting that for a minority, whatever the logic, they will automatically choose the W12 because its numbers - price, power and performance - are larger.

What remains unchanged for the V8, however, is the huge amount of customer personalization possible. Much has been written about the appealing characteristics of this two-plus-two on the inside, but when I set eyes on the car that has Drive-My’s name on the paperwork it really hits home. Painted outside in the unusual shade of Alpine Green, trimmed inside with Cumbrian Green leather, and with a new milled alloy finish for the centre console called Cotes de Geneve (it’s a machined surface influenced by those inside traditional wristwatches), it's hard to imagine a more spectacular driving environment anywhere at any price, even before you consider the gimmick of the central rotating dial pack.

Settling down into the diamond-quilted driver's seat, the world seems a very nice place indeed. The GT exudes handcrafted opulence, and thumbing the starter button elicits a deep, purposeful bellow from the V8. It's obvious Bentley has put the man- hours in tuning the engine to its own tastes, and it has a deeper, richer, more aristocratic woofle than in its more aggressive German sibling. As ever, the turbos are nestled within the vee of the engine for the shortest gas paths and, in theory, the most immediate throttle response.

The GT is exceptionally good at being effortless transport. It lopes along with a relaxing suppleness and is utterly undemanding and refined, with the usual GT driver modes - Comfort, Bentley, Sport and Individual - on offer with a twist of a big dial in front of the gearlever. Bentley mode is a kind of catch-all setting that you tend to spend most of the time in, for it offers a pliant ride but with enough control and response to feel alert if the road suddenly demands action. So configured, the GT V8 is capable of consuming vast distances, and with the benefit of cylinder deactivation there’s apparently 500 miles to be had from the 90-litre tank {although official figures aren’t available yet).

Having said that, if you really want to drive then it’s a flick of the dial to Sport, and perhaps a tug downwards on the gear selector lever to force the eight-speed twin-clutch transmission into manual mode. Our car has the Dynamic Ride option, and once Sport Is selected you can sense its contribution to the lateral stiffness of the GT, the ride staying just on the right side of overly firm but the bars' actuation clearly supporting and preventing an otherwise heavy body from lurching and heaving in turns. With less weight over the nose than the W12 the V8 is keener to change direction, and the rear-biased four-wheel-drive system provides sterling traction without making the car feel inert. It’s not as visceral or perhaps as exciting as an Aston Martin DB11, but the Conti scores on being a true grand tourer: demure for the long haul, but capable and enjoyable on the twisty bit towards the end of your journey. For combining this breadth of ability, it is without equal.

Once you’re fully in sync with the GT V8 you can whisk it along at surprisingly naughty speeds whilst making the smallest, finest corrections to the wheel and inputs at the pedals, as though you're Jackie Stewart in one of those old Ford promotional films. Every millimetre has some effect, the GT responding like a vehicle that weighs a third less than it does. It’s a subtle sort of pleasure, but it’s disarmingly appealing how ruthlessly it can pick apart a good road in spite of all the leather and luxury being carried around. The gearbox is particularly adept at resisting the temptation in ‘auto’ to change up early, letting the ample torque of the motor do the work, which is very satisfying. There’s real thunder to the exhaust in Sport, too, and the thuds and occasional cracks on the overrun are random enough to not be irritating.

Two things seem clear to me. Firstly, this is, by some considerable margin, the best and most likeable Bentley I’ve ever driven. And secondly, if this is what those engineers in Crewe can do with the 'standard’ V8, the platform clearly has more than enough scope for a much more hardcore driver s GT variant based on the eight-cylinder car. Those after the highest top speed and most flamboyant trinkets will always gravitate towards the W12 in the world of Bentley Motors, but on the evidence of this first drive, those interested in driving for enjoyment's sake should always opt for the bent eight. 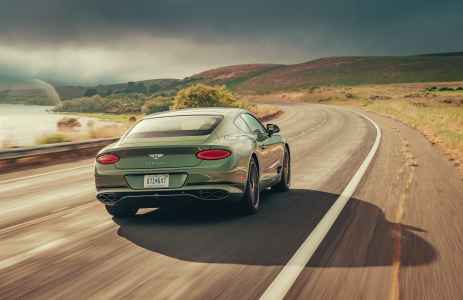 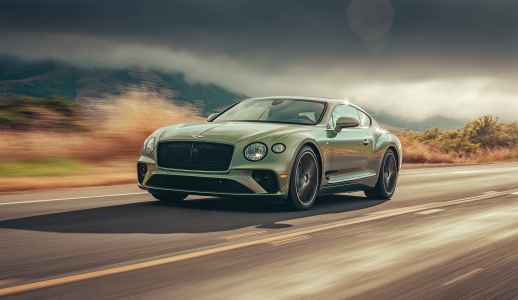 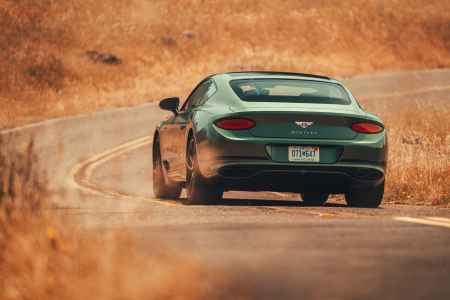 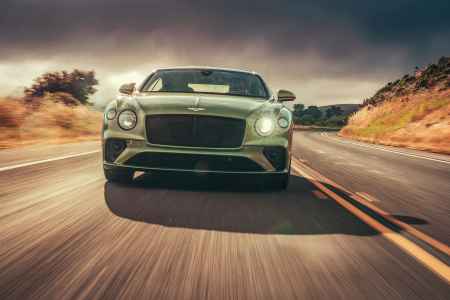 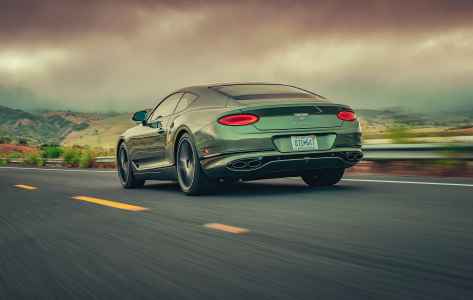 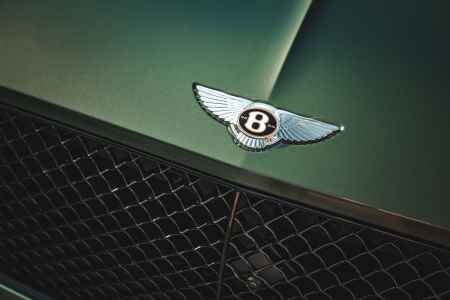 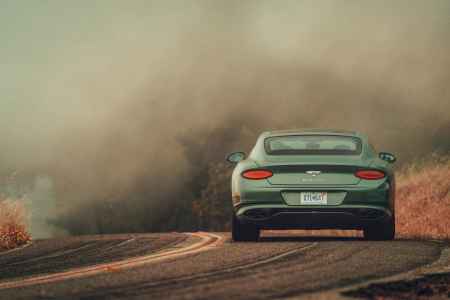 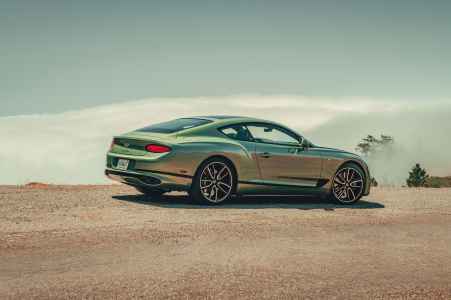 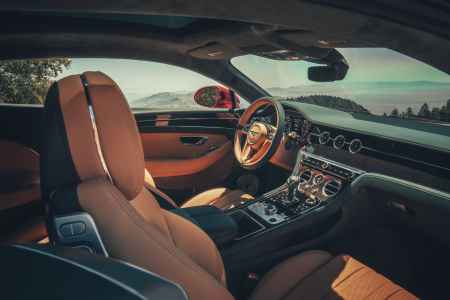 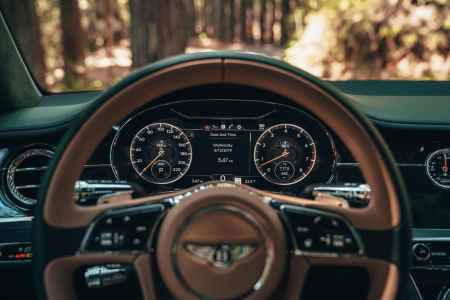 Above and left: plenty of leather, wood and milled alloy on show in the GT’s classy cabin; centre console’s Cotes de Geneve finish is inspired by that found on the movements of high-end wristwatches. Far left: test car’s 22-inch alloys are part of the £13,515 Milliner Driving option; standard wheels are 20-inch items. Above: full digital instruments mimic analogue Bentley dials of old, but blend in modern functionality. Above right: GT belies its considerable weight with a keenness to change direction thanks to its lighter engine.

+  Great blend of performance and luxury; better than the 6.0-litre W12

If 2020 Bentley Continental GT V8 fast and handles well the weight doesn't really doesn't matter. The Ford Pinto hatch is 366 pounds lighter than a Mazda Miata (2,015 lbs vs 2,381 lbs). Is the Pinto a track beast because it's super light... no

Plus there are benefits to higher weight such as better tire friction which means the tires to spin a lot less when accelerating. The GT3-R has the same 0-60 time of the F-type V8 (3.4 seconds) despite being 1090 pounds heavier and similar hp.

Bad guys usually have big Fast cars like a Granturismo or Quattroporte so it'll get away fine. If it's a Brera wouldn't work up. a sweat.

"007 Bond car"? At 6'5" I bet Sean Connery would make it work. The other Bond actors would look to diminutive on screen in a bigger than life car like the 2019 Bentley GT V8 (II)