The brilliant Bruce McLaren and Denny Hulme comprehensively put New Zealand on the motorsport map, but while these future stars were still young teenagers, two engineering partners in a small garage in Christchurch were conceiving an ingenious rear-engined special made from wartime scrap and powered by an unlikely engine. Like many aspiring race-car builders, Hec Green and Jack Brewer had learnt their skills as aircraft mechanics during WW2.

Both characters had a background in racing, Green with a Wolseley Hornet-based single-seater and Brewer on motorcycles. As an avid reader of any car magazine that found its way Down Under to the ‘Garden City’, Green spied a story about a British intelligence investigation into the Third Reich-backed Grand Prix racing cars. The report by Brit Cameron Earl focused in detail on the development of the Auto Union and Mercedes machines, and was published – amazingly – by His Majesty’s Stationery Office in 1947. Green immediately sent off a money order for 30 shillings, and after a few weeks the 140-page paperback arrived in the post.

‘The engine kicks in with a guttural sound like an aircraft, exhausts shooting flames, Gatling gun-style, as it pops and bangs’

The fascinating study would greatly influence their next racing car, known as the RA Vanguard after its power unit, which was developed from the new Standard saloon that sold well in New Zealand. The innovative mid-engined layout designed by Austrians Ferdinand Porsche and Robert Eberan von Eberhorst became the guide for the new Kiwi challenger but, without access to exotic materials and factory facilities, Green and Brewer had to be resourceful with scrap. Both enthusiasts kept an eye on war-surplus sales for anything they could recycle, with a favourite purchase being old aluminium propellers – an ideal source of high-quality, lightweight metal for fabrication work. Even the new racer’s bright-orange paint was a gift from George Begg, a local tractor specialist.

The Vanguard’s wet-liner, overhead-valve 2088cc four-cylinder engine was extensively developed and the list of modifications included a cross-drilled crank, a new camshaft designed and ground by Green, sodium-cooled valves, lighter pistons and larger head studs. To further increase power, a Wade aircraft supercharger was chain-driven off the nose of the crank and fed by twin 2in SU carburettors, giving 14lb of boost. Water injection cooled the manifold, and on a methanol mix the tough ‘four’ gave 200bhp.

A Citroën Traction-derived three-speed ’box served as a neat transaxle, but the engine’s punchy torque resulted in frustrating failures. The most novel aspect of the home-built Auto Union-style racer was the suspension. The front end featured a parallel-trailing-link arrangement inspired by the Teutonic Silver Arrows, but the springing was devised from aviation undercarriage practice with handmade uprights and bungee-style rubber shock cords with three bands for each side. The dampers were oil-filled lever-arms, mounted inboard.

The rear was also unusual, a low-pivot swing-axle arrangement with the inner arms located directly under the centre of the axle. For springing, war-surplus hydraulic Oleo struts sourced from a Curtiss P-40 Kittyhawk’s tail wheel were mounted outside the bodywork.

The steel body panels were fixed with Dzus fasteners for quick access, and metal straps held the fuel tank ahead of the cockpit. The nose featured an odd rectangular grille with thick bars, while a Brooklands-style aeroscreen offered wind protection for the driver and four exhaust stubs exited directly behind him. The original wheels were equally unconventional and homemade, with six spokes welded between the brake-drum backplates and the steel rim.

The result, with registration plate 79-200 screwed to the nose, looked more Eastern European than Grand Prix Silver Arrow, but the bold design really stood out against the local flathead V8-powered sprint-style racers. But this wasn’t the only early post-war Kiwi competition car to take the rear-engined route, as John McMillan’s 4-litre Ford special boldly followed suit.

Green gave the RA Vanguard its debut in the 1951 Lady Wigram Trophy, staged on the local airfield track, where it was matched against imported pre-war Grand Prix machines, sports cars and local specials. A ‘wet paint’ sign in the paddock-warned enthusiasts of the sticky orange finish, but the car failed to start the race due to frustrating engine problems with a holed piston. Green was back at Wigram the following year, by which time the rear-engined revolution had started to develop with a Kieft and a clutch of Coopers, headed by Ben Gibbons who took pole from George Smith’s Mercury-powered GeeCeeEss special. The RA went well during the early laps around the fast airfield track, but on lap 14 the weak Citroën gearbox cried enough and forced retirement.

The determined Green returned in 1953 and, while the Grand Prix Alfa Tipo B roared to its third success, the RA suffered engine failure on lap 12. When spare time allowed from his busy Christchurch garage, Green continued to develop the Vanguard. The ’box was replaced by a home-built three-speed transaxle, and the novel wheels were further strengthened with 12 spokes. The RA continued to compete all over South Island, and in 1953 won the beach-racing title. Green also set a New Zealand Class D speed record at 188.89kph (117mph), with the standing quarter-mile in 13.8 secs.

The Vanguard raced on through the late ’50s in various hands, including former speedway rider Geoff Mardon, who tuned the RA’s tricky on-the-limit handling. At the 1958 Dunedin street race, Mardon held a spectacular third behind Ross Jensen’s Maserati 250F and young Bruce McLaren’s Cooper until a rear wheel came off. Later pilots included Les Moore, a legend in New Zealand motorsport with both motorcycles and cars. As well as winning the Lady Wigram in 1951 and ’1952 with his Alfa, Moore also built New Zealand’s first Wall of Death in his Christchurch garden, where his son Ronnie developed the riding skills that later led to speedway world championship glory. Problems with the wheels were resolved by fitting conventional wires, but Moore was unhappy with the rear swing-axles – with good reason. Being a speedway man, his idea of getting around corners was to drift with the tail hanging right out. Story has it that, through a fast bend at Timaru, a wheel tucked under the rear and caused the RA to somersault, with the resulting accident killing Moore.

The wreck lay outside Green’s Christchurch workshop for a number of years until Grant Cowie saved it. The project passed through several owners until Mike Courteney rebuilt the RA as a tribute to its innovative designers and returned it to the track in local historic events. At Hamilton street circuit, the RA spun out and mounted the pavement after suspension failure but, once repaired, it continued to appear in Historic Racing and Sports Car Club events including circuits and hillclimbs until acquired in 2017 by Kiwi movie producer Rob Whitehouse and retired tin-top ace Paul Radisich.

“It’s a great piece of our racing history, and goes perfectly with my ex-Possum Bourne Group A Subaru Impreza,” says lifelong petrolhead Whitehouse. After a rebuild by Matt King to sort the brakes and steering, the RA was started for the first time in Britain last year, prior to the Chateau Impney Hill Climb. “It was a Saturday morning with no one about, so we decided to run it around the industrial units,” recalls Whitehouse. “The noise was so loud it set off all the alarms. I’ve driven some wild machines, but this is the maddest.” At Impney the RA created huge interest, but its long gearing proved impractical up the tight course: “We only managed one run because the car clearly wasn’t ready, but I’d love to see it race at Goodwood as a tribute to Green and Brewer.”

The ingenuity and resourceful character of motorsport enthusiasts in this far corner of the world after WW2 has long fascinated me, and when I heard that Whitehouse had brought the Vanguard to the UK I tried to get Goodwood interested, but sadly none of the team had heard of this innovative Kiwi special.

After its British debut last summer, we set up a day at Longcross test track where again its raucous, fire-spitting exhausts set off alarms. When Whitehouse offered a drive, I jumped at the chance to try the Christchurch challenger. Just like the Silver Arrows that inspired it, the steering wheel is removable to make it easier to slide down onto the flat seat. Once ensconced, you feel as if you’re virtually sitting on the bellypan.

Behind the dished, three-spoke wheel with cord-wrapped rim, the crackle-black vertical dash panel looks more like that of a fighter plane. The five black-faced dials range from rev counter to fuel pressure, with boost, water temperature and oil pressure grouped above.

The pedals sitting down in the nose between the stretched bungee cords and chassis tubes are well spaced, but once the steering wheel is back in you’d struggle to exit quickly because your knees are trapped under the fuel-tank scuttle.

The seat is wide, as I soon discover when cornering as my backside slides about on the red vinyl base as if I’m in a wet bathtub. The gearlever is set to the left, just ahead of the seat, with first slotted back, and second and third sequentially forward. The selection is reluctant at first, but thankfully gets cleaner as the revs rise.

With the ignition on and fuel pump ticking, I give the thumbs-up for a push start. As I release the clutch, the engine kicks in dramatically with a guttural noise that sounds more like an aircraft warming up, the exhaust stubs shooting flames, Gatling gun-style, as it pops and bangs.

With speed the controls come to life, the steering direct and well-weighted despite the wider rubber now fitted compared to that of Green’s day. Even on a dusty track the RA feels neutral through corners, but the huge backfire when lifting off into the turns is unnerving – as if you’re being shot at in a dogfight. The rugged engine has bags of torque despite being only a 2-litre, but its long-legged third gear demands a more open track to reveal the Vanguard’s true character rather than our tight, wooded course. When it was first built, the RA’s off-track incidents were all down to breakages, so the handling must have given Green and other drivers confidence when it was running strongly. As with the Auto Unions, motorcycle racers seemed better able to find its limits.

My short run is enough to appreciate the redoubtable spirit of the RA Vanguard’s builders and drivers. While wealthy rivals imported pre-war GP cars to race in local Formule Libre events, these enthusiasts designed and built something from scratch. With no belts or a roll bar, Green gunned his maverick machine faster and faster, bouncing about on rough airfields as he guided it skillfully through wide corners lined with straw bales. Exploring the limits of such an unconventional home-built racer demanded an extra level of the right stuff, but Green and Brewer typified that dogged Kiwi spirit with which McLaren later showed Europe the way. Although it would have no chance now against the ERAs and Maseratis, it would be great to see the Vanguard in the Goodwood Trophy – and its paddock corner with ute support vehicle. 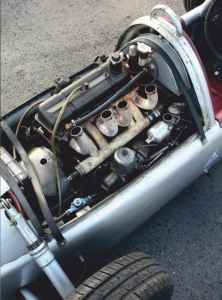 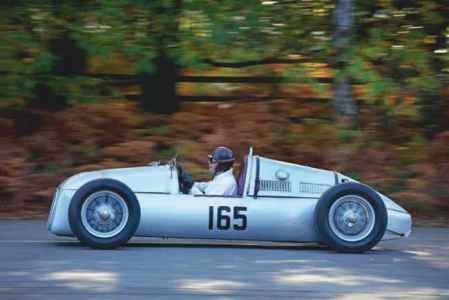 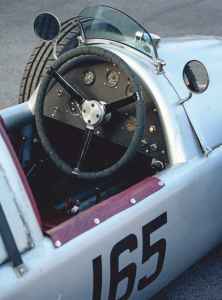 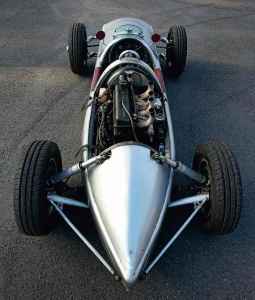 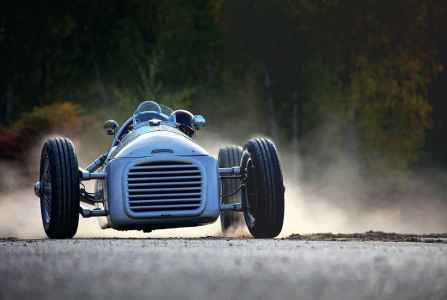 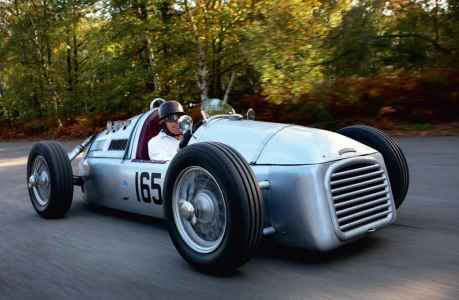 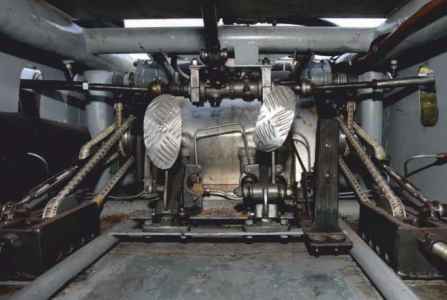 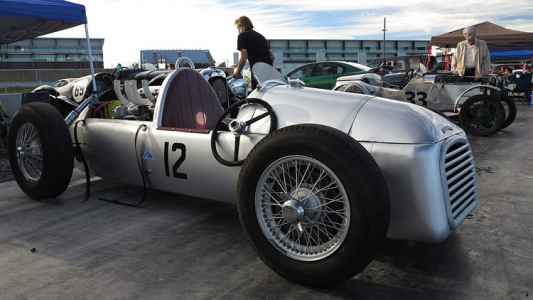 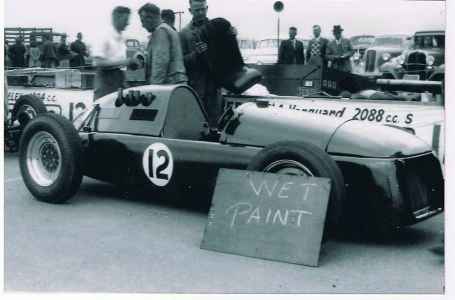 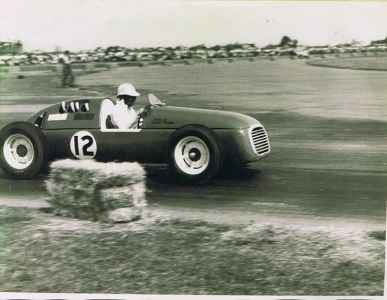 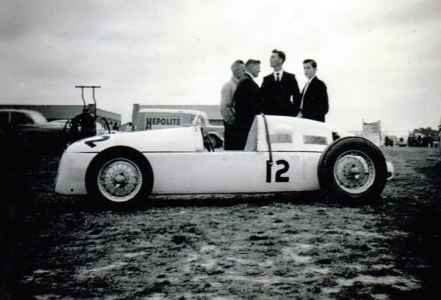 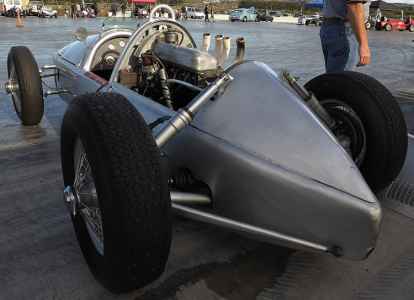 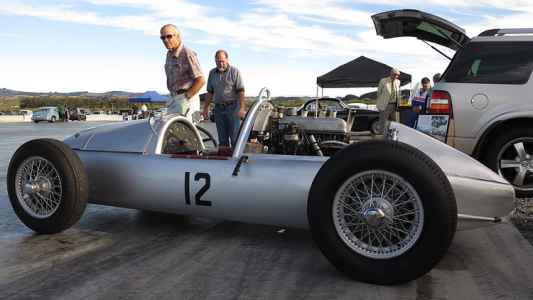 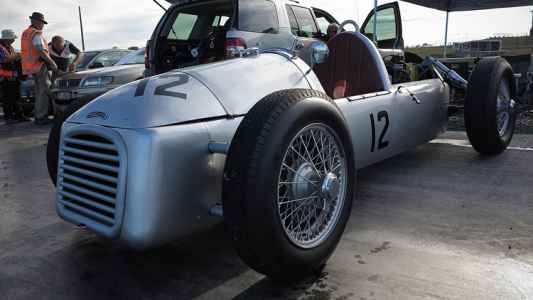 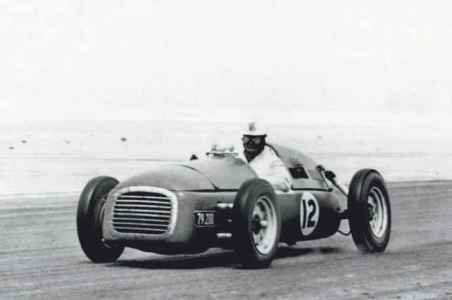