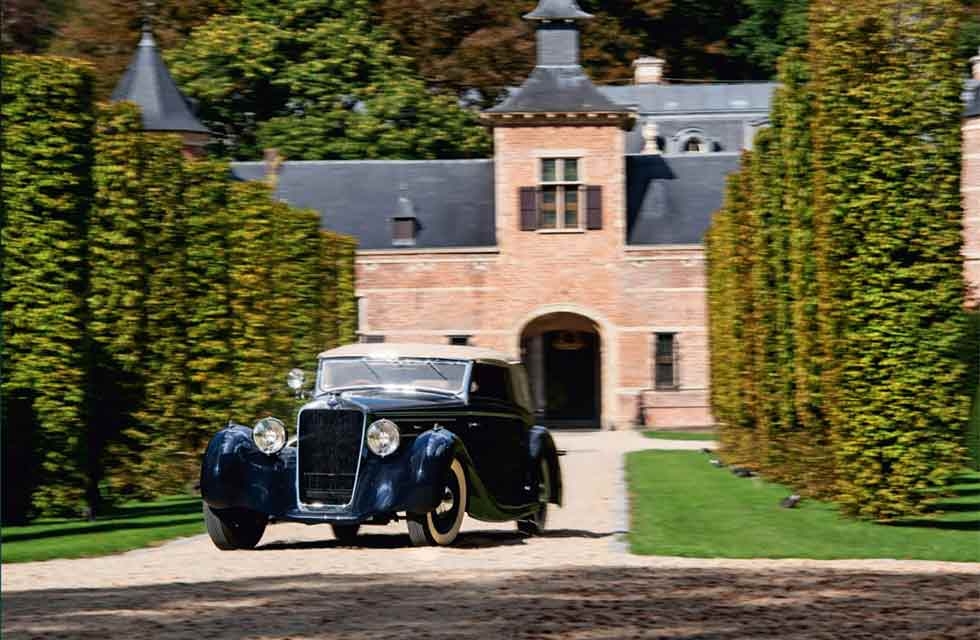 Rhapsody in blue. The glamorous Delage D8-120 was the swansong of the great French marque, but thanks to the Delahaye merger in 1935 it went out in serious style. Words Mick Walsh. Photography Dirk De Jager.

ELEGANCE WAS EXPECTED… …and delivered, when Chapron bodied the fabulous Delage D8-120 drop-top

DELAGE: SWANSONG OF A FRENCH GREAT

You’ve made your fortune by 1938 and have decided to indulge yourself with a spectacular automobile. The doors have opened at the Grand Palais, the magnificent Paris exhibition venue for the 32nd Salon de l’Automobile. Despite the unsettled political climate in Europe, the French motor show looks as packed as ever, with striking Art Deco-style hanging lights and splendid signage bearing the names of the automotive industry’s greatest brands.

You’ve already seen pictures in the newspapers of Prime Minister Édouard Daladier being welcomed onto the impressive Delage stand by the marque’s eponymous founder Louis, and although you know that the once-great Gallic independent is now part of Delahaye, you’re keen to see the white D8-120 convertible everyone is talking about.

Any rich buyer was spoilt for choice in 1938, with the Hispano-Suiza J12 and Rolls-Royce Phantom III both offering smooth, exotic V12 refinement. But Delage’s unsophisticated ‘eight’ had been enlarged to 4.7 litres, and with a sleek, 130in-wheelbase chassis designed by Delahaye it seemed to offer the best of both French companies. Independent transverse-leaf front suspension, hydraulic brakes and an electromagnetic Cotal gearbox helped update the great Delage name, and persuasive salesmen at the Grand Palais boldly claimed 100mph for this top-of-the-range heavyweight.

There were more agile luxury performers, but with flamboyant bodywork by Labourdette, Saoutchik and, most elegant of all, Chapron, the Delage was a guaranteed star at any concours d’elegance. The D8-120 was most definitely a grand cruiser, despite the flashy, Cord-style external exhaust pipes and whitewall tyres, yet the Delage name still had competition kudos, as Louis Gérard’s Tourist Trophy victory behind the wheel of a D6 sports at Donington just a month before the Paris show had underlined. The price for just a bare chassis was a hefty FFr94,000, but sales were slow and customers could talk themselves into a discount.

The D8-120 inspired some of the most stylish coachwork, none more dramatic than the Aérosport coupés – particularly the one-off Pourtout Aerodynamic – but most wealthy customers wanted dropheads for those summer drives south. To enjoy the Mediterranean climate, Henri Chapron’s firm created the definitive, much-copied cabriolet style, which excelled on the long-wheelbase Delage chassis.

With the option of three hood positions, the Chapron design arguably looks most cohesive with the low roof fully raised. Walking around its imposing form, it’s apparent how different the design looks from side to side, the four chrome exhausts on the driver’s side significantly changing the Delage’s aesthetic character.

The bodywork features many exquisite styling details. Fitted to the windscreen frame is a Star spotlight, made in Brussels; it has a neat handle, no doubt to highlight the road while your man changes wheels in the dark. The Marchal sidelights are Art Deco-inspired, while the streamlined decoration theme continued with wing profile motifs on the bonnet sides. Swing open the long suicide door and access is easy to both front and rear seats. Polished metal fittings and bold, black Jaeger dials enhance the sumptuously retrimmed interior with its elegant wooden dashboard, door caps and seat details. The broad four-spoke wheel is matched with a dinky Cotal gearbox quadrant mounted to the left of the steering column.

Listening to the engine’s muted rasp, you’d never guess the humble origins of the high-camshaft, pushrod-operated overhead-valve unit, which was essentially a Delahaye design with a pair of extra cylinders. With more than two tons to power, the single-carb motor feels lusty and energetic. Combined with the slick action of the short lever, the D8 gathers pace with surprising alacrity. Even over Belgian pavé streets there’s little kickback to the steering, the independent front end offering more refinement than Bugatti’s solid axle and expensive de Ram dampers. The steering gets lighter and sharper with speed, and the brakes have good feel and response, despite the hefty rolling weight. Once the road straightens, the short-stroke ‘eight’ delivers silken power, pulling 70mph with ease and grace. The Chapron bodywork combined with the stiff scuttle suffers no creaks or groans, even over rough surfaces, confirming the quality of both the Paris coachbuilder’s construction and the car’s more recent Czech rebuild.

But to test the salesmen’s 100mph claims would be a challenge and you’d want a long, empty runway. Amazingly, two D8-120s were prepared for the 1938 Rallye Monte-Carlo, but I can’t imagine handling it over the icy Alps – even with ultra-lightweight bodywork built by Autobineau. The surviving rally special performed well, though a door opening on the final driving test spoilt its finishing position. Once you’ve adjusted to the contrast of the broad wheel and petite gear selector, the D8 is a delight to command. Purring along a treelined avenue, with the dappled sunlight flashing across the long bonnet, you are transported straight back to the time when this car might have driven these very roads when new.

The number of D8-120s built is a mystery because factory records were lost during the war, but just over 40 survive. Early history of this Chapron-bodied cabriolet – chassis 50790 – isn’t known, but the car was imported to Belgium where it remained until 1953, when it was sold to England. Owned by Eleazer Ambrose Evans, the glamorous Delage contrasted with the austerity of post-war London when parked around his Bloomsbury home before it moved to Ashford.

In 1959 the car was sold to Edgar Hopkins, who lived in Twickenham, west London. Painted grey over black, and registered SLC 16, the Delage remained on the road into the early ’60s, whereupon Hopkins decided to invest in a full engine rebuild. New crankshaft bearings were ordered from Crank-Bears in Mortlake, but it appears that the work was never completed, despite Hopkins clearly being very attached to the car. For the next 44 years the part-dismantled D8-120 remained in storage at Riverview Gardens, not far from the Classic & Sports Car offices, and I must have cycled by hundreds of times without knowing it was hidden there. When Hopkins died, his widow contacted The Delage Register; president Peter Jacobs acquired the car and began the reassembly.

Looking for a more affordable specialist to restore the coachwork, the project eventually ended up in the Czech Republic, which is where Belgian enthusiast Erwin Beerens came upon the unfinished Delage. “A friend had recently had his Arnolt-Bristol restored with Veteran Car in Prague, and I was impressed by the work,” recalls Beerens. “They had also just finished a Figoni et Falaschi-bodied Delahaye, which was superb. The Delage was in boxes, and was offered as a deal including a two-year rebuild. I’d owned a Delage D6 and always admired the great marque. The project tempted me and it proved a good experience. Every two months I’d fly out to Prague to see how the car was progressing, and the workmanship was great.”

After the D8 was stripped down to its chassis, the straight-eight engine was discovered to be in excellent condition and with new bearings fitted back in the ’60s. Pleasingly, the mechanical rebuild proved straightforward thanks to the team’s experience with Delahaye and Cotal preselector transmissions.

Once the bodywork’s steel main section and alloy wings had been restored, a decision had to be made about the finish. Beerens decided to go for a single colour rather than the original twotone, with a deep blue enhanced by the tan leather trim and cloth hood. The bumpers were also left off because he felt it better suited the styling. Finally, in 2017, Beerens flew to the Czech Republic for a test drive. Having never driven a D8-120 he had nothing to compare it to, but it didn’t disappoint – particularly the smooth power and the clever clutchless Cotal change. After minor finishing, the Delage was transported back to Belgium nearly 70 years after it left for England. It joined a diverse collection that included a 1902 vis-à-vis Delahaye, a Rolls-Royce Phantom I woodie, and Bugattis including Ettore’s own Type 57C.

“It’s better to drive than a Type 57,” says Beerens. “The ride is more refined and the steering lightens quickly when on the move. I love the Cotal change, which is like an old fashioned tiptronic. The engine isn’t complicated. Unlike my Bugattis, it’s easy to work on and super-reliable. The torque is strong and the ratios are well matched. I’ve also driven a Mercedes-Benz 540K, which feels like a tank in comparison.”

The Second World War changed everything, but a few final D8-120s were later completed from spares. How Delage’s prestige range might have developed is hinted at in a cancelled order for a D160: a mock-up with a V12 Delahaye engine was planned for display at the 1939 Paris salon, with bodywork by Letourneur et Marchand, but by then France’s priorities had changed.

A year later Louis Delage, then aged 66, left the business to focus on cycling, including a pilgrimage to Lourdes. Having sold his impressive properties and paid his creditors, he lived modestly in his retirement in a small flat in Le Vésinet, a district in the west of Paris. In the garage he kept a D6 3-litre, but it was rarely used because he preferred walking or cycling in the city. Delage died on 14 December 1947 and, sadly, that winter his flat flooded and all his letters and photographs were destroyed and thrown away. The last cars carrying his name were sold in 1954 and the Gallic tradition for automotive luxury was picked up by Facel Vega. But nothing since has come close to matching the fabulous cars of Delage’s golden age.

Three years after Delage’s death, a D8-120 came under a different spotlight when director Vincente Minnelli started looking for a suitably glamorous French car for Nina Foch to be chauffeured in for his 1951 film An American in Paris. The MGM studio ended up buying two Chapron-bodied D8-120s, one for studio use in Culver City and another for location shots in Paris. Story has it one car was later owned by Howard Hughes, and it is now one of the stars of the Mullin Museum, but it’s no longer the two-tone green as featured in the Academy Award-winning picture.

Today, D8-120s are rarely seen away from the concours circuit and prestigious awards have included two Best of Show gongs at Pebble Beach, both for Delage aficionado Sam Mann. Although some purists unfairly dismiss the final models of the Delahaye merger, the imposing D8-120 inspired some of the most beautiful French coachwork. For a trip from Paris down to the Côte d’Azur in the late 1930s, few cars could get close to the lavish style and smooth performance of a D8-120 Chapron cabriolet, and for a pose along the Promenade des Anglais in Nice, little would match it for jazz-age glamour. No wonder Minnelli chose one for his marvellous musical-inspired movie.