Fiat 130 Coupe test-drive. Received wisdom has it that the Fiat 130 Coupe is a beautiful car. It was designed at Pininfarina by Paolo Martin, whose attempt at a similar theme for the Rolls-Royce Camargue is the Mr Hyde to the 130’s Dr Jekyll. So, in retrospect, is the 130 Coupe an object of pure beauty with its wide, flat headlights and the subtle dihedral of its flanks? Or is it, actually, a bit naive and heavy-handed, an outsize caricature of something more lissom?

It’s certainly larger than life, longer even than the Interceptor although not as lengthy as the SM whose tapered extremities disguise the size of its roadprint. One welcome side-effect of this vastness is that there’s more rear-seat space in the Fiat than in any other car here. This is a family-size four-seater that just happens to have two doors.

Contemporary tests drooled over the Fiat’s plushness. Motor again, ‘Inside, it’s not just lavishly equipped but exquisitely finished and appointed. We can’t recall anything finer in style and decor, regardless of price.’ Wow. And a Fiat too. Eat your hearts out, premium brands. It’s true that the interior is pretty special, melding the feelgood traditional warmth of wood veneer and sumptuous, pleated cloth-and-leather seats with an arresting design-house modernity.

There are lots of bold, straight lines mirroring those outside, and the sort of in-your-face diagonals much loved by Italian designers: I see them on the door trims, and most strikingly in the black slatted grilles covering the doors’ loudspeakers. Then there’s the steering wheel, here with three holes in each of the two spokes instead of the Peugeot’s demure one, a broad, switch-filled centre console and an instrument panel that would really need only a single sheet of curved Perspex covering it to make it something from a car 15 years newer in design.

For 1971, the Coupe’s first year of production despite the numberplate seen on the car here, it was quite a revolutionary dashboard. It’s all the more impressive, then, that the dash design is one of the few styled features shared with the 130 saloon, launched two years earlier. 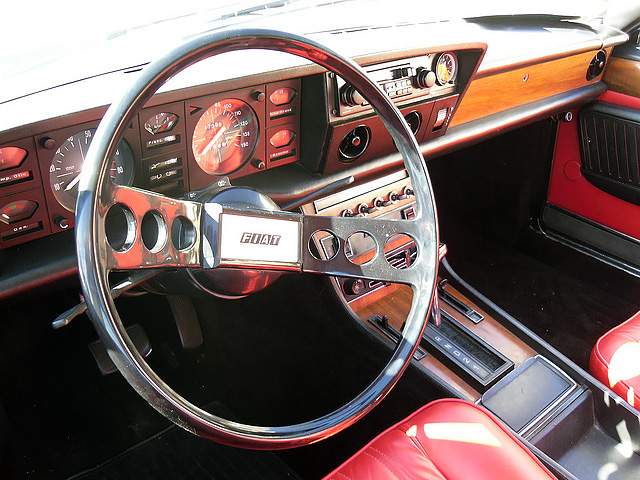 Interior is a curious blend of modernity and traditional. Enzo Ferrari had a 130, as did Sophia Loren and Marcello Mastroianni. Lamperdi-designed V6 fizzles and crackles when pocked.

Under the Fiat’s striking skin lurk entirely worthy mechanicals. The suspension is by struts all round, sprung at the front by torsion bars to make room for the broad, albeit 60-degree, V6. The engine, designed by that automotive maestro Aurelio Lampredi, shares its belt-driven overhead- camshaft architecture and detail design with the humble, four-cylinder Fiat 128 unit, but everything is suitably upsized to create a 3235cc capacity and a 165bhp power peak.

Air and fuel pass through a single, twin- choke Weber carburettor, and peak torque of 184lb ft arrives at a gentle 3400rpm despite the astonishingly oversquare bore and stroke dimensions (102mm and 66mm respectively).

However, there are 1610 kilograms to haul and only three automatically-shifting, Borg-Warner-machined gears to do it through. No wonder the Fiat 130 Coupe has such short gearing; at 80mph the engine is spinning at over 4000rpm, hardly fitting for a luxury tourer. So it proves to be a slightly schizophrenic car to drive, with a relaxed, supple ride, languid power steering requiring larger wheel movements than a powered system should, but an engine which feels racier than its surroundings allow it to be.

It has a typical V6 note, like that of a straight-six but with an underlying ripple, and it likes to rev beyond its refinement zone so it can be heard. Its best efforts result in a 116mph top speed and a 10.6- second 0-60mph time according to that Motor test, neither figure particularly impressive, while our test car’s spongy, long-travel brakes appear to mirror those of both test cars tried by the weekly magazine’s testing team back in 1973.

I can persuade the Fiat to fly if I make maximum use of the rather violent kickdown, but that’s when decorum deserts it and its innate Italian fizz surfaces.

Of all the cars here, the Fiat is the most curious. It looks dramatic, it oozes Italianate luxury from every surface and it has a Lampredi-designed V6 under the bonnet. However, the engineers never quite finished honing the way it drives. This would be a fascinating car to own, not least because it’s so rare. But as a companion to take on a transcontinental trip, I’m not so sure.

It flies when I make maximum use of the violent kickdown, but that’s when decorum deserts it and its innate Italian fizz surfaces

Robert Menghini There are only seven of these left on the road in the UK. I bought this one in Italy four years ago from a wealthy businessman - I heard about it, drove to Milan and tracked it down. It had only one elderly owner from new before him.

The engine had been rebuilt by Ferrari mechanics. I ran it in on the 1200-mile drive home and have now done about 4000 miles. It had a bare-metal respray but it’s had no rust, ever. All the suspension bits are new-old-stock, and the interior was retrimmed in Milan.’