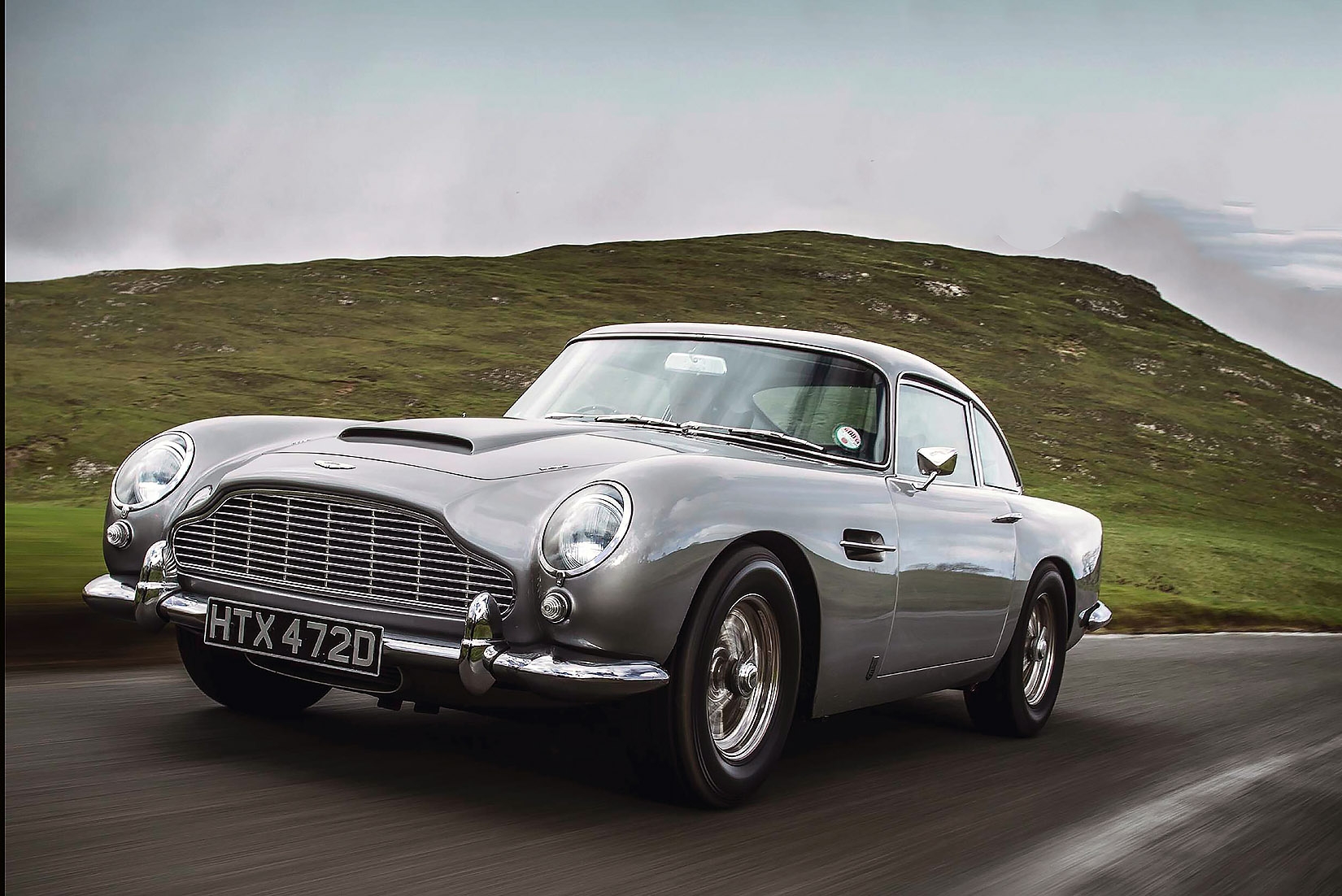 Driving Aston Martin DB5. The List. Years ago reader Phil Doherty loved pushing his Corgi Aston Martin DB5 along the floor – will Classic Cars offer to let him drive the real thing turn out to be a dream come true or a disappointment? Couldn’t believe when classic cars offered me the drive. As a child, Classic Cars reader Phil Doherty pushed his toy DB5 around on the floor. Now, we hand him a full-size one to play with. Words: Andrew Noakes. Photography: Charlie Magee. 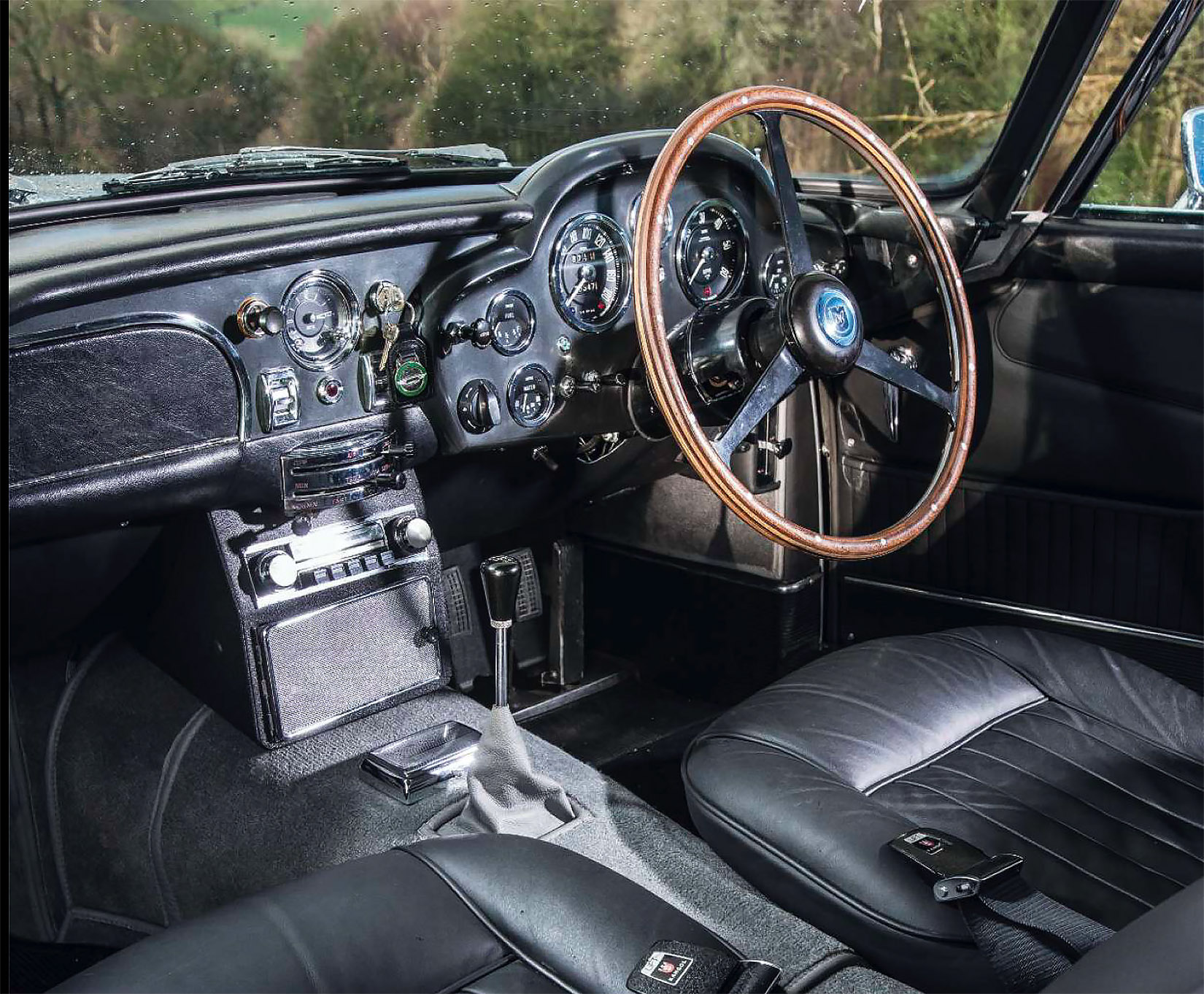 Our reader was captivated by the Peak District sun glinting off the chrome gauges.

When Goldfinger, the third James Bond film, opened late in 1964, it earned back its $3 million production cost in just two weeks. At the time that made it the fastest-grossing movie ever made. The suave, Savile Row-suited Sean Connery who played Bond was already a star, but Goldfinger turned the maker of his car from a relatively obscure sports car company into a household name, practically overnight.

Paul Doherty grew up in the Sixties and, like many other small boys, he had a Corgi James Bond Aston Martin DB5, so it’s no surprise it appears on his list of favourite classics. But he couldn’t believe it when Drive-my offered to put him behind the wheel of one. ‘My wife said we’d had an email asking if I’d like to drive an Aston Martin DB5, but she wasn’t sure who it was from. I told her to just say yes!’ Which is how Paul and I come to be at Aston Martin Heritage specialists Aston Engineering in Derby, watching the early morning drizzle collecting in beads on the Silver Birch paintwork of DB5 chassis number 1987 – ours for the day. 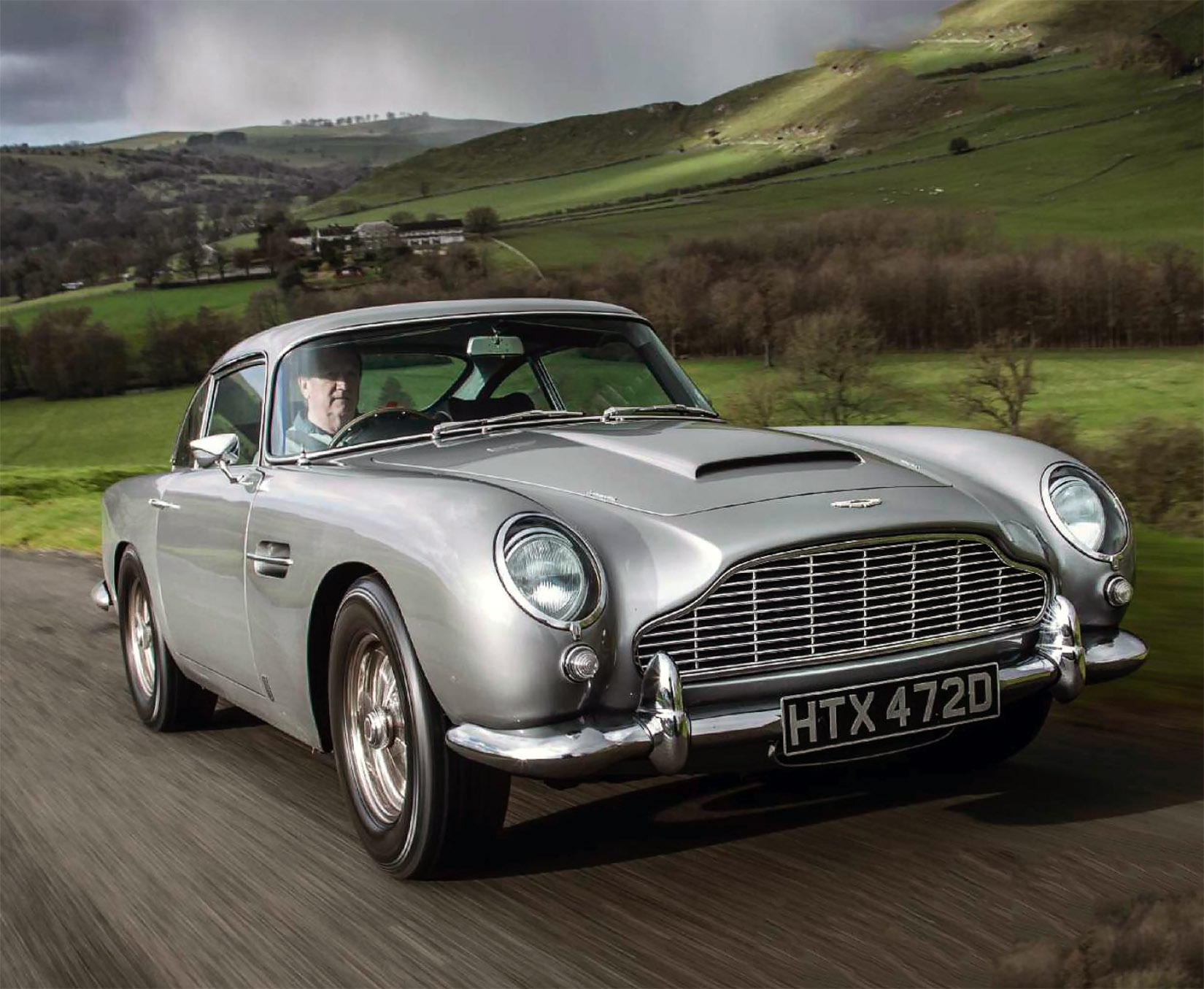 ‘It’s a beautiful car, there’s no doubt about it,’ says Paul, surveying the elegant shape, penned in Milan by Carlo Anderloni’s team at Carrozzeria Touring for the DB4 in the late Fifties. DB4s had exposed headlamps, but the cowled lamps introduced on the short- chassis DB4GT in 1959 were used on the later DB4 Vantage, and carried over to the DB5 to produce the definitive DB shape.

‘When it was new, compared to its contemporaries, it must have looked unbelievable,’ Paul adds. He’s keen to get behind the wheel, and is already pulling the driver’s door open and settling into the retrimmed leather seat. ‘It’s a very pleasant place to be. Nice smell of new leather.’ The narrow pillars also mean the DB5 driver has excellent visibility. ‘There seems to be a lot of glass with the curving windscreen,’ Paul points out. ‘We’re sat fairly high up and it’s easy to see the extremities.’ The driver’s view takes in a combination of the rounded front wings and the air scoop on top of the bonnet. ‘You can’t beat the long-bonnet look,’ says Paul. ‘When you’re behind the wheel looking over that expanse of metal it’s fantastic.’ Inside, the Aston is an intriguing and contradictory mixture of ostentation, elegance and straightforward efficiency. Brackets and fittings are bespoke castings with heavy chrome plate, and chromed switches in the headlining operate courtesy lamps. There are no garish badges: just a subtle ‘DB’ logo on the boss of the wood- rimmed steering wheel. Paul approves of the well-stocked dash. ‘These dials are what it’s all about, with the sun bouncing off them. When the sun shines it looks a special car.’

That specialness is underlined when Paul fires up the Tadek Marek-designed six-cylinder engine. It has the melodious sound that’s characteristic of all in-line sixes, but the Aston unit has a sophisticated timbre all of its own – a genteel woofle at idle with a musical exhaust note that hardens into an urgent bark as the revs rise, and a delicious crackle on the over-run once the engine is warm. Engine and exhaust sounds are ever-present, but they are never so intrusive that you’d classify it as noise. ‘I love the sound,’ says Paul as we pull out of Aston Engineering’s courtyard.

We haven’t had a chance to look under the bonnet, and neither of us is sure whether this car has the standard engine with triple SU carburettors or the Vantage-tune unit with three Weber 45DCOEs. ‘Whatever they are, they’re working very nicely,’ says Paul. ‘It picks up with no hesitation. There’s plenty of torque – it will pull away in second without a problem.’

The torquey engine is proving to be a boon, because Paul is struggling with the dainty little gearlever, with second gear proving particularly recalcitrant. ‘It’s a gearchange you’d have to get used to, to do it quickly. It doesn’t reward hamfistedness,’ he says. It also takes a while before Paul finds the control knob for the wipers.

‘I didn’t want to turn it in case the machine guns came on,’ he grins. Soon we catch up with a lorry dawdling along a twisty lane, and the moment the road straightens Paul is giving the big six its head in third gear to punt the Aston past. By the time we’re back on our side of the road, he’s grinning so much his jaw is starting to ache. 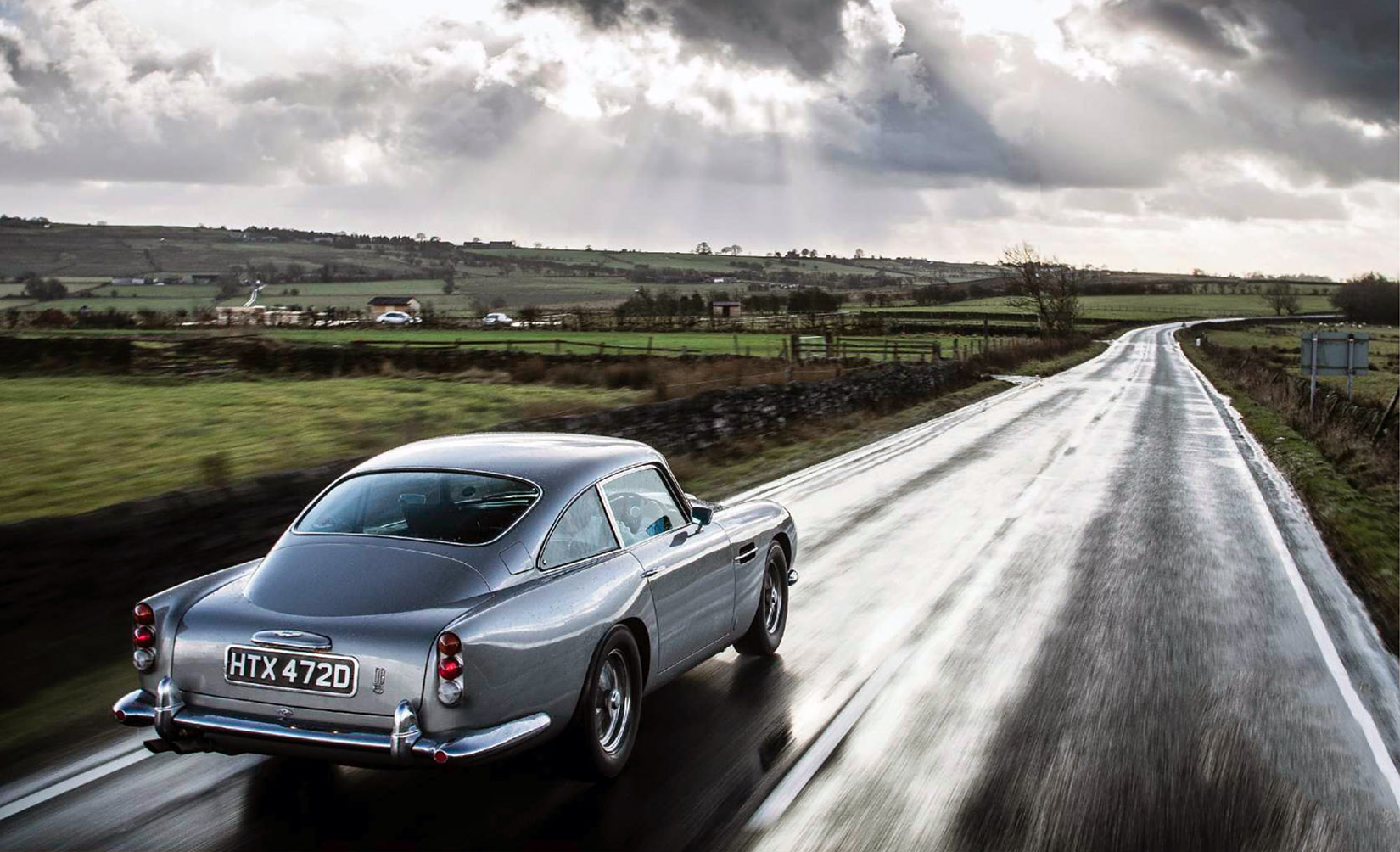 We stop to take have a look under the bonnet. The DB5 is running triple Webers, and the polished alloy cam covers carry Aston Engineering badges – a hint that this is more than just a standard-spec 4.0-litre engine. Later, when we return the car, we find out this is a rebuilt 4.7-litre unit developing a genuine 340bhp, which explains why it performs so well. This car has also been treated to a handling kit and electric power steering.

I can feel the benefit of the steering assistance as soon as I get behind the wheel. Manoeuvring the Aston is much easier than it would be with manual steering, but thankfully the system does little to interfere with feedback on the road. The dainty wood rim dances gently in my fingertips as the tyres meet imperfections in the surface, but the DB5 never wanders from the chosen line. Only the biggest bumps upset its composure, shaking the structure and bouncing the occupants around, but even then the Aston tracks impressively straight. Cornering needs a classic slow in, fast out technique. Enter a corner too fast or get on the power too early and the front end washes out wide: instead I need to brake in a straight line, let the DB5 turn in and wait for it to settle before powering out of the bend. When I get it right, it’s enormously satisfying.

The view over that bonnet is key to the DB5’s appeal, according to Paul

There’s a certain satisfaction to be had from mastering that gearchange, too. The tiny lever, which sprouts vertically from the transmission tunnel, has a long fore-aft throw but there’s no great weight to its action, which fools me into thinking I can take liberties. It needs a considered, positive movement, and a good blip of the throttle when downshifting to second. Fortunately the pedals are well arranged and the brakes, though servo-assisted, need a hefty shove so the pedal provides a stable pivot for heel-and-toe footwork. The engine is creamy-smooth up to 6000rpm and pulls hard right through the range. It always has something in hand.

‘It feels a lot more modern than I thought it would,’ Paul says.

‘It’s like a modern car in terms of driveability. The brakes are heavy but there’s good feel to them – I like it when you can feel you’re stopping. It picks up speed seamlessly.’ It’s more a grand tourer rather than a sports car, in his view. ‘You feel like you could sit there with one elbow on the window sill without being worried about the car; it’s just going to do the job. It’s a very, very similar kind of car to the Jensen Interceptor I had.

‘When you put your foot down it goes, with no drama. It almost encourages you to drive it quickly.’

Would Paul have a DB5, if he had the odd half million to spare? He’s certainly tempted. ‘I’d probably prefer a 4.0-litre one, in blue with a very light interior.’ He’d be happy to trade the added convenience of this car’s power steering for the extra involvement of the original unassisted system. ‘The best cars are the ones where you are almost part of it when you’re in it, whether that’s on a track or a road. When you get up on a sunny Sunday morning and you just want to go for a drive for no reason other than going for a drive, you want a car that you feel is working with you and part of you.’ Paul’s certain that a DB5 would carry on putting a smile on his face for a long time. ‘When you lifted the garage door, it would make you feel good,’ he says. ‘And that’s the essence of a classic.’

Classic Cars will make a dream drive happen for one reader in every issue. All you need to do to be in the reckoning is to send us your list of the ten cars you dream most of driving, plus a CV of the classic cars you’ve owned, then fire It off to us. You’ll need to be prepared for the possibility of long-distance travel and an early-morning start, but the experience will be unforgettable.

Almost indistinguishable from Series 5 DB4 Vantage from the outside: the DB5 badges most cars carried on front wings and bootlid were about the only giveaways. Significant changes under the skin: DB5 used big-bore 4.0-litre version of the six-cylinder engine developed for the Lagonda Rapide in 1961, with triple SUs and 282bhp. Vantage engine had three Webers and 314bhp. DB4-style four-speed David Brown gearbox with overdrive was replaced in 1964 by five-speed ZF, with the option of a Borg- Warner automatic transmission.

Longer wheelbase and higher roofline of DB6 are deceptive: despite appearances, it is only 2in (51mm) longer than DB5 and 17lb (7.7kg) heavier. New body shape with rear spoiler (developed from ‘Project’ racing cars of the early Sixties) reduces drag and improves high-speed stability, while offering much-improved interior space. Marek six now up to a theoretical 325bhp in Vantage form. DB6 Mkll of 1969 has wider wheels, flared arches, new seats and the option of AE Brico fuel injection. Replaced by six-cylinder DBS in 1970.