Outlaw Enforcement. A whole new attitude for Italy’s graceful GT. The sublime Lancia Aurelia B20 GT is a hard act to follow.So how to make it better? Make it an outlaw!Words Paul Hardiman. Photography Paul Harmer.

Nobody chops up Ferrari 250 GTEs any more to make GTO replicas – but Lancia specialist Thornley Kelham had the conviction to create the world’s first ‘outlaw’ Lancia Aurelia.

Outlaw? It’s a term applied to cars outside the mainstream series, and translates as the Italian fuorilegge – hence Thornley Kelham’s website, www.fuorilegge.co.uk. Though it had never been done before, the seeds had been sown with the factory’s chop-top racers of the ’50s. Taking a stock B20 GT coupé, TK started with a clean sheet and went the full Monty – provoking reactions polarised from ‘mesmerisingly gorgeous’ to ‘be careful with that gas axe, Eugene’. Tellingly, the owners have track records that encompass dalliances with top-end collector cars as well as hot rods. This car bridges the gap. Seamlessly.

Having restored more than a dozen Aurelias and, emboldened by the popularity of ‘outlaw’ (or hot-rodded) Porsche 356s, plus experience gained resurrecting the ex-Mille Miglia, ex-Le Mans, ex-Carrera PanAmericana choptop Bracco racer, arguably the granddaddy of them all, the men at TK couldn’t help muse ‘What if…?’

What if they were to create the coolest bad-boy B20 GT, its coupé styling – some say by Boano at Ghia – already sleek and low but subtly altered and re-engineered while remaining undeniably Aurelia. And what if they were to find an owner with that same vision?

As it happened, there was a candidate, a well-known California-based car collector, as TK co-founder Simon Thornley explains: ‘He came to us and said “Would you be offended if I asked you to do an outlaw Aurelia?” He had pictures of a lowered S2, in 1953 – by that time they were messing with aerodynamics – and we’d earned our stripes doing the Bracco car. So we said, yes, we’d love to do an outlaw, but we want to keep it all Lancia.’ 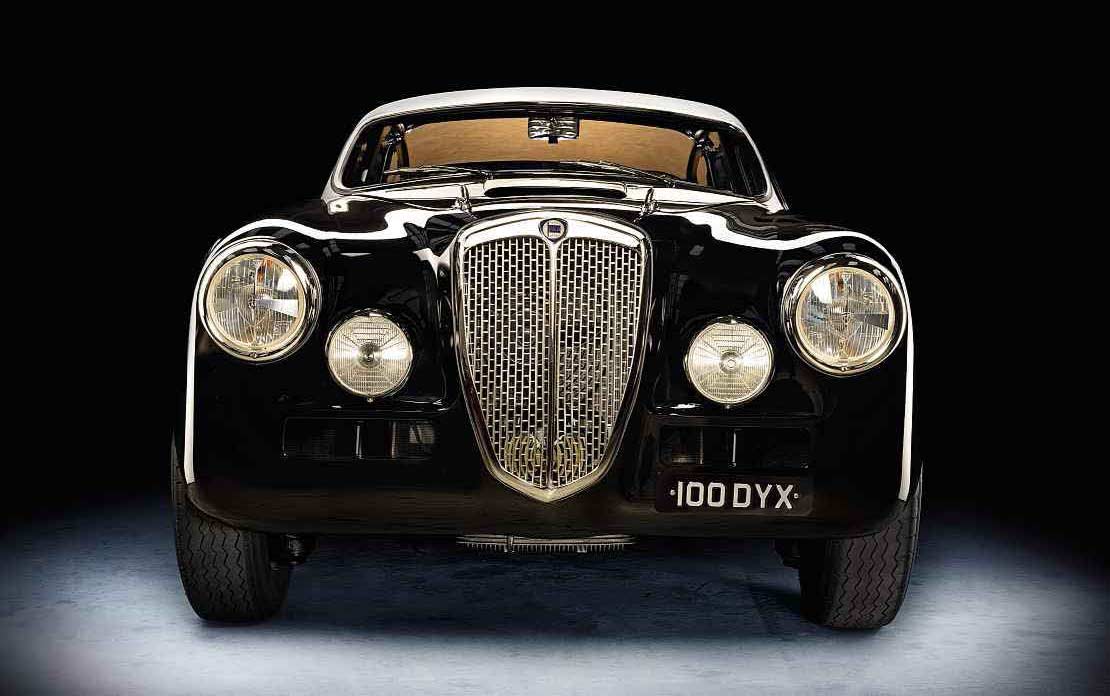 Finding a donor wasn’t difficult, as TK always has a couple in restoration and a couple in the pipeline, but it was decided to base the build on a Series 6 so as not to offend the cognoscenti; the earlier series are the most collectable and deemed the most precious, so it was as well not to start with one of those. Thornley: ‘The Series 5 is the least loved… but we didn’t have one.’

So the focus turned to a 1957 Series 6 B20 GT that Thornley Kelham had ‘in stock’ and, though it’s recognisably, undeniably Aurelia, just about every square foot of sheet metal was changed – representing 1400 hours of work. All four wings have a gentle swell, made from scratch by hand, while the rear quarters are completely new and hug their contents tightly as on a Ferrari 250 SWB. The door frames are bespoke and there are no rain gutters and a minimum of bright trim – shaved, nosed and decked in hot rod speak – along with no front indicators or bumper apertures. Even the fuel filler aperture took two days to create. ‘For the Aurelia, only floorpans are available pre-stamped. We make the rest,’ says Wayne Kelham, who oversees the workshop. 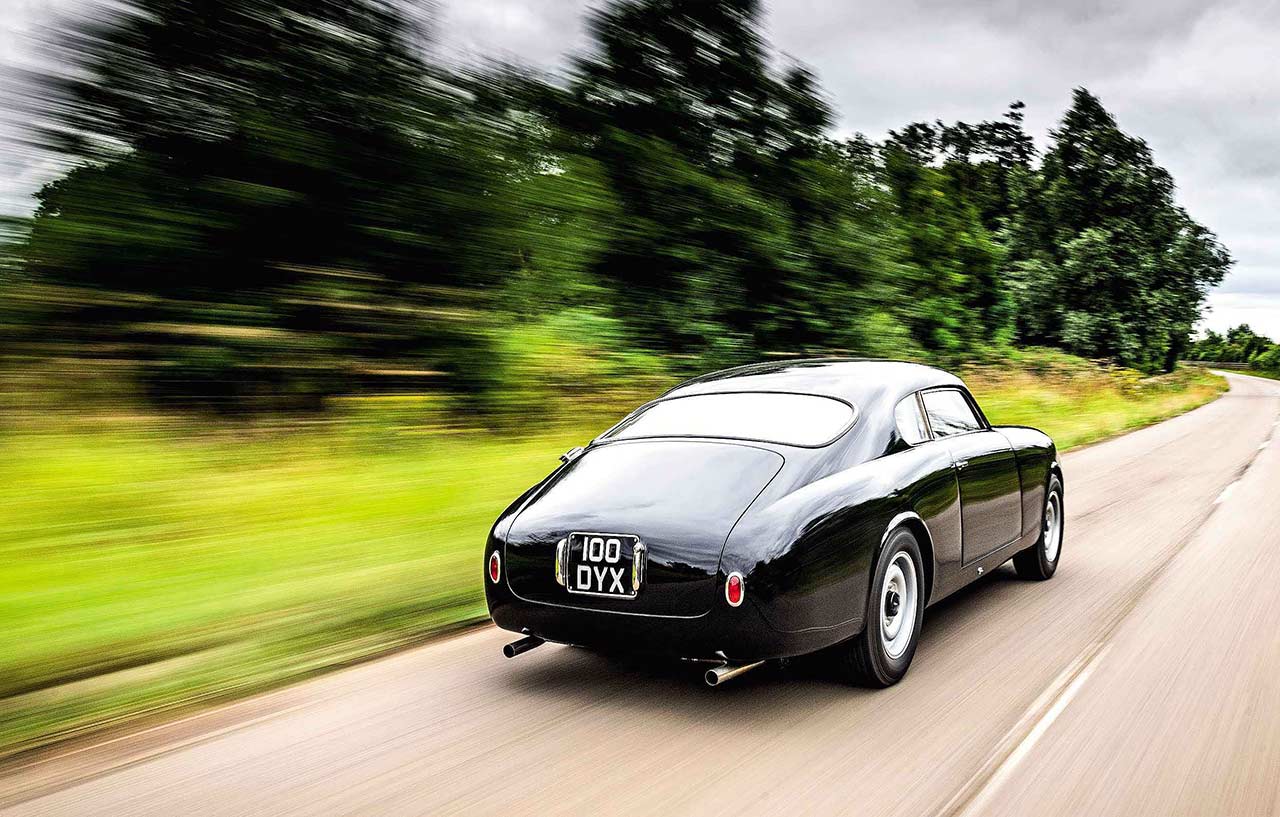 The work was by Matt Tupman, who’d been with TK for 3½ years. The recessed Marchal driving lights are simply fantastic, and any brightwork is nickel-plated, not chromed, for a more subtle shine. It rides on custom-centred Jaguar D-type-style Dunlop alloys shod in Avon ZZs, beloved of racers, underlining that this car was created for driving. The front screen is custom-made but the rear is original, still with the factory dimples near the edges. The door handles have been cut down, following Nardi practice on competition Aurelias back in the day, and there are Ferrari competition-style bonnet catches. It wears 2.0-litre tail-lights (from the first two series of coupés) ‘because they’re just… cool’, says Thornley.

‘There’s no CAD/CAM in it,’ adds Kelham. ‘It was all drawn out full-size on sheets of brown paper.’ Seeing the finished body in the metal in 2014, I felt it would be a crime to paint it. I would have taken mine in clearcoat please, forever to display the art wrought underneath. Black was the next obvious shade, the most unflattering colour for bodywork because any flaws or ripples become immediately obvious. Inside, it goes a little more hot rod with a practical, minimalist look: quilted leather, Porsche Speedster seats and Tilton pedals with brake bias-adjust. They should look out of place but they catch the tone perfectly. 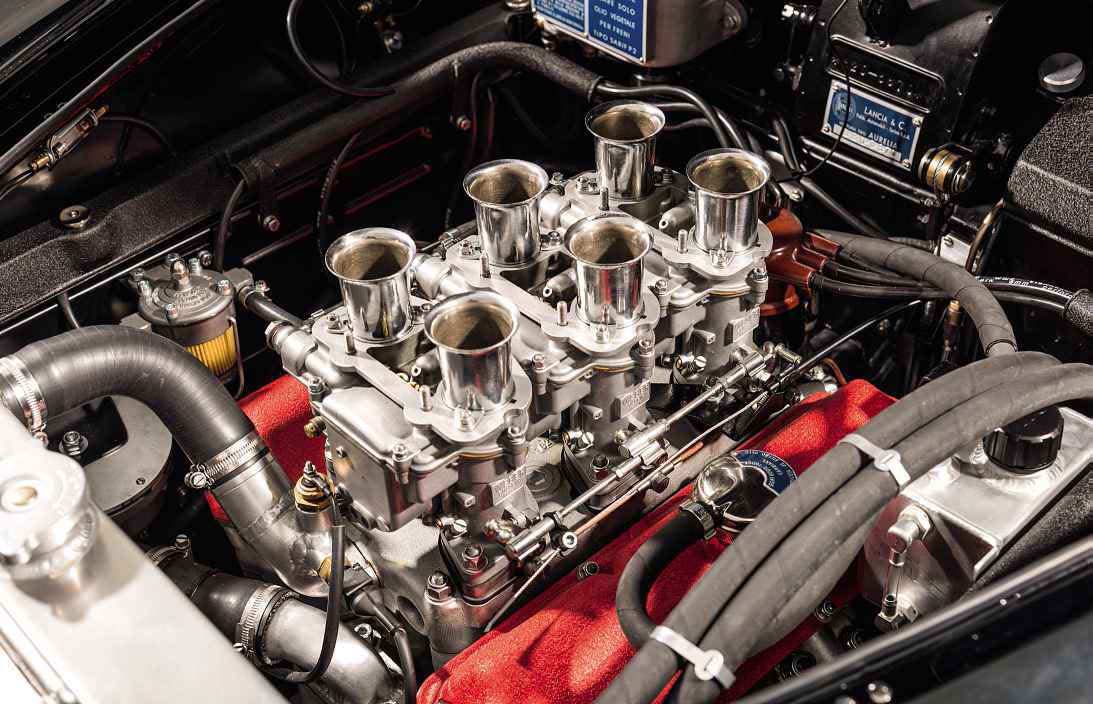 The wheel is Nardi, of course, the Jaeger dials standard but with the inner bezels painted black. The headlining is Alcantara, all trimmed by Gary Wright. ‘We used Aniline all-weather Connolly leather, which will wear-in fast and look patinated quickly,’ says Thornley. The seat lever buttons are turned out of aluminium, and there’s a period Clayton heater. The rollcage, painted the same gloss black as the body and dashboard, is so subtle you don’t notice it at first, as it runs right through the dash.

The motor is a 2.5-litre Flaminia V6, which has larger bores and shorter stroke than the Aurelia unit, bored to 2.8 with three twinchoke Webers, beautiful headers and fabricated engine mounts, and even the plug-lead conduits are crackle-plated. With skimmed and ported heads and slightly more compression and cam it makes 170bhp-plus. Red crackle-finish cam covers are the only conceit and there’s some very racer-esque open bellmouth and aluminium air scoop treatment up top. The Flaminia transaxle fits on the original mounts, though inside there’s a hydraulic centre-thrust bearing, just one of the modern touches that have been integrated where you can’t see them. Even underneath there are delightful little details, such as the bronze drain plug in the transaxle. As well as the subtly reworked body and extra power there are disc brakes all round, operated by modern Tilton hardware – which you will find elsewhere on some vintage Bentleys. 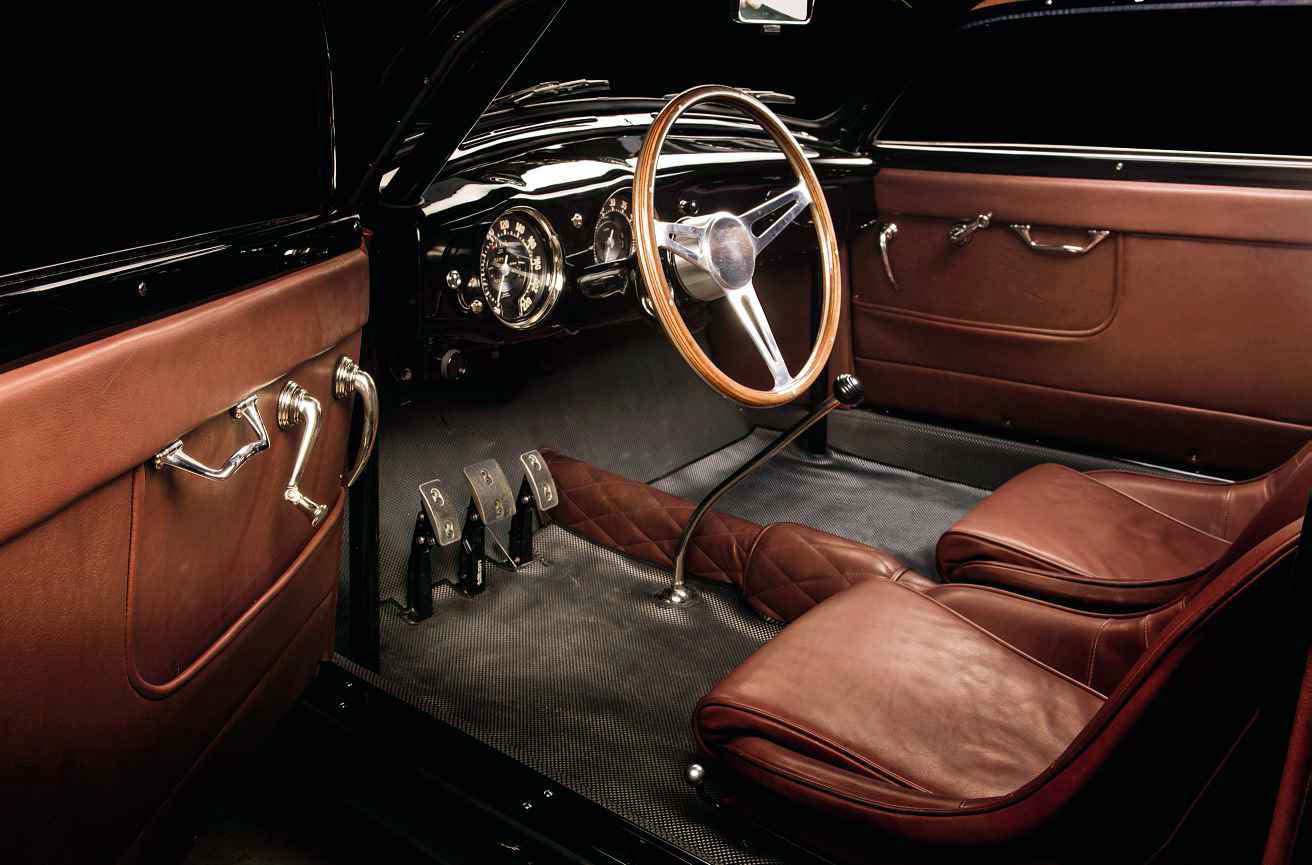 It drives just like an Aurelia… only more so, as a 911 Club Sport is to a 3.2 Carrera. All of the Aurelia’s hallmarks are there – stable platform, flowing chassis that exploits momentum rather than sheer power, slightly railway-points gearchange and occasionally ponderous steering when in roll – just with the best bits accentuated. So the 2.8 V6 is notably harder-edged than the 2.0-litre or 2.5 and wants to rev, pulling more strongly with a harder bark, and the brakes bite sharply but are quite progressive.

The steering still loads up in corners thanks to the sliding-pillar front suspension, but the gearchange is as sweet as a transaxle car’s can possibly get, and the view over the jewel-like instruments remains super-cool, taking you straight to the Carrera PanAmericana. Though it sounds like a Dino when you extend it to the full chainsaw howl, this is an Aurelia that you don’t have to work hard to get places rapidly, and you find yourself wondering why the factory never offered the larger engine. 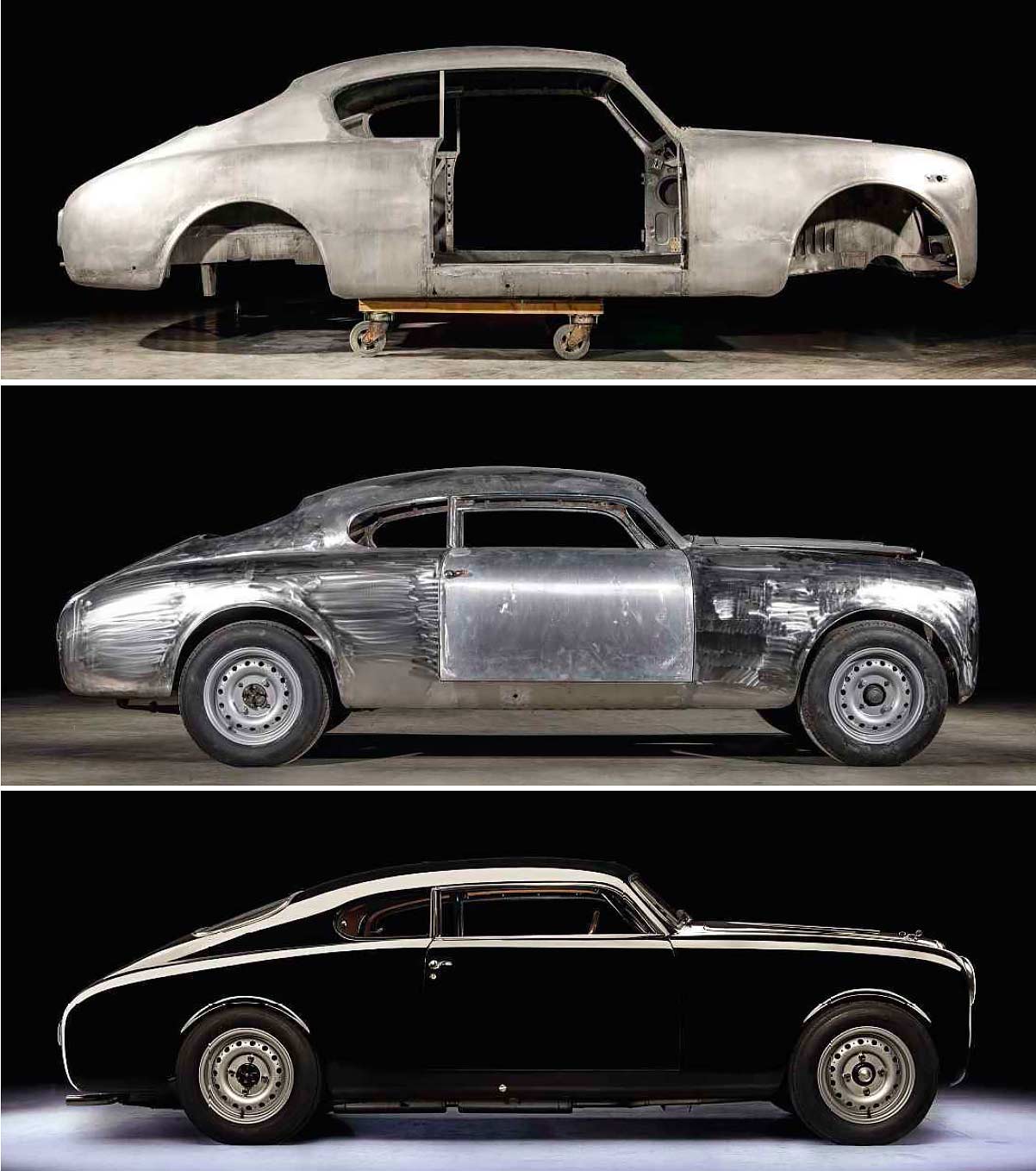 Even before the first car was finished there was another planned, for a friend of the owner, who’d sampled it before it left England. Danny Sullivan had a 13-year oval racing career, winning 17 Indycar races including the 1985 Indy 500 (having spun after overtaking Mario Andretti for the lead!) and the 1988 CART Championship, following an F1 season with Tyrrell. And he’s a fully paid-up, box-ticked petrolhead of the highest order too.

As well as past ownership of a DB4, Mercedes Gullwing and a 911 RS 2.7 Lightweight (which he sold to buy a Tuthill 911 rally car), he keeps a Porsche 356A – as well as a Vincent Black Shadow – and he likes to drive his cars, having just completed a 1200-mile road trip in his smallblock-engined ’32 Ford hot rod. ‘I tend to keep one, enjoy it for a couple of years and then move on to something else,’ he explains.

So one of these was an obvious candidate for next on the list, especially as ‘my wife says I can’t leave anything alone’. He’d seen pictures of his friend’s car and on a visit to England went and tried it.

‘I went out with Wayne and he showed me how it all worked. I’d driven an Aurelia and a Flaminia before with [dealer] Lukas Hüni, after a DB MkIII and a Bentley R-Type, and thought they were fantastic. But I had so much more fun driving this one – not mega-powerful but it had just that little bit more sex appeal, and I felt that we could have comfortably carried on to Edinburgh. The Flaminia engine in an Aurelia would have made a fantastic factory hot rod.’

Sullivan’s Outlaw should be ready by summer, with a few detail changes: ‘We’re using Ferrari seats to keep it all Italian, and I’m looking forward to touring it as far as Sicily with some friends while it’s still in Europe.’ He’s acutely aware that not everyone will approve. ‘Every car is restorable, at a price. The car that I bought was a runner but I traded it for an incomplete car, basically a shell, which will take about six weeks less metalwork.’

The first Outlaw, now residing in California as Sullivan’s will, made a huge impact at Monterey Car Week in August 2016, stopping the show at the Quail Lodge Concours and at the Monterey Jet Center party, and led directly to a third commission, also from a Californian: Tex Otto was ‘mesmerised’.

‘I’ve had several hot rods and have been conflicted with cutting an unmolested car,’ he says. ‘I had a super-nice ’1932 Ford three-window coupe but I couldn’t bear to have it chopped, so I sold it to the next guy who did just that without remorse. Coming from vintage Ferraris, where modifications detract from provenance, resurrecting an abandoned Lancia – of which a few thousand were made – looked like an opportunity to have classic Pinin Farina coachwork and a finely engineered chassis and drivetrainalongwithoptionsforpersonalisation in a contemporary grand tourer.

‘Over the past few years I’ve been looking at Outlaw Porsche 356s of varying levels, from extensive Emory creations to more basic stocklooking coupés with updated mechanicals.

Though they have a very sporting character to which I gravitate, I’ve been thinking of a more stately car with substance and refinement. A combination of hot rod, custom, Monte Carlo Rally and race influence, yet gentlemanly in presentation. When I saw Simon and Wayne’s creation, it all came together.

‘My foundation car is a neglected castaway that requires a lot of love to bring back, and this is a way in which some cars will be saved. It would be sacrilegious to modify a nice, original car to this extent, but there are numerous Aurelias for those who seek a period car. A long-neglected body that needs major restoration and re-creation opens up the possibility of creating a modern interpretation.’

The Outlaw has certainly captured imaginations since its first public outing at Salon Privé in 2015. If two’s company, is three a crowd? How many can you build before the car’s uniqueness becomes diluted? ‘Six,’ says Thornley. ‘That’s our stated maximum.’

The ultimate endorsement comes from Giovanni de Virgilio, son of Francesco who designed that V6 engine and was one of the Aurelia’s key creators. He told Thornley: ‘It’s a very purposeful and realistic car that Gianni Lancia could have built for a friend.

‘A combination of hot rod, custom, Monte Carlo Rally and race influence, yet gentlemanly in presentation’

‘You don’t have to work hard to get places rapidly, so you wonder why the factory never offered the larger engine’

‘Seeing the finished body in the metal, I felt it would be a crime to paint it’’

‘The owners have track records that encompass top-end collector cars as well as hot rods. This car bridges the gap’