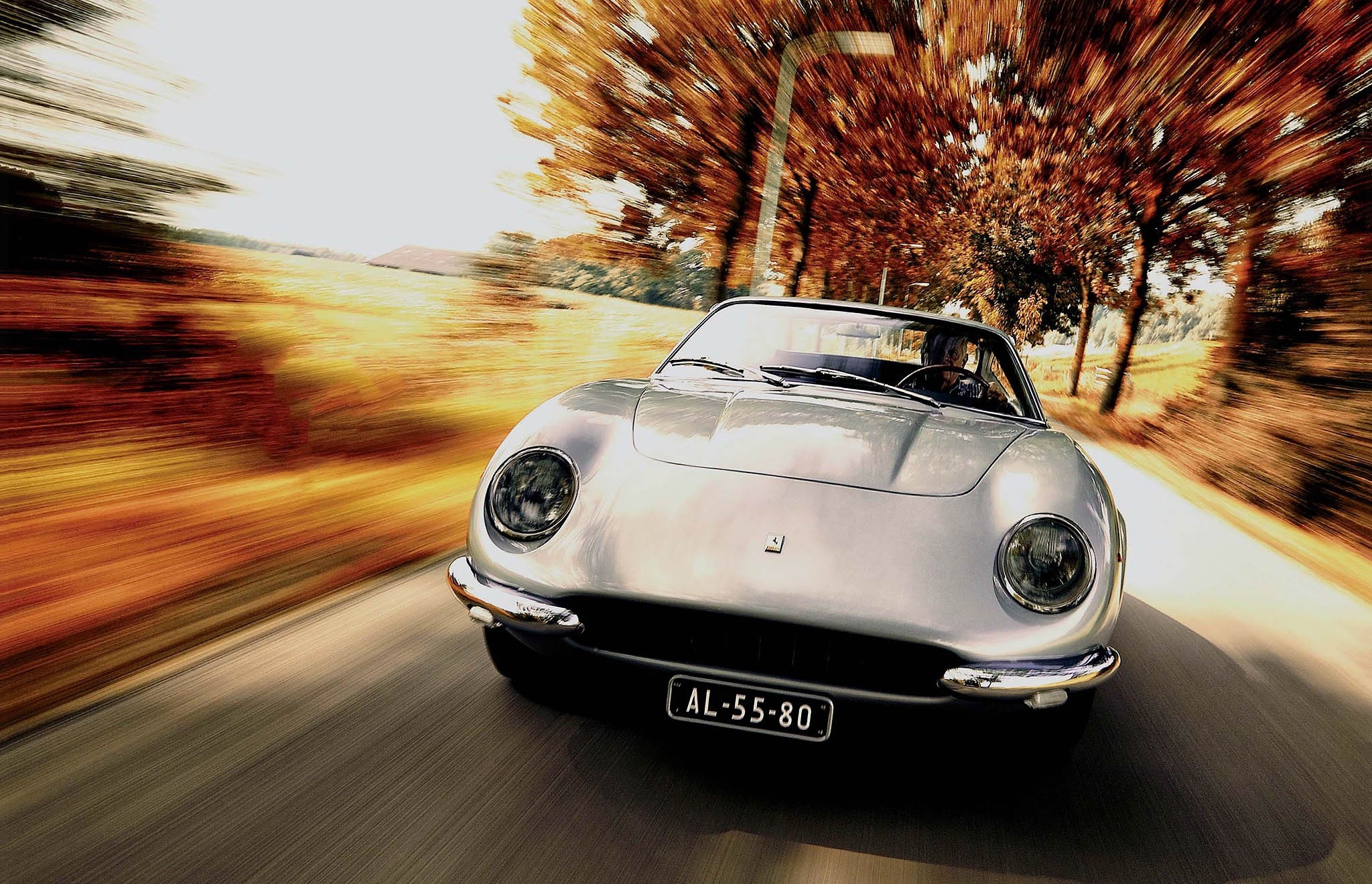 Leonardo Fioravanti’s flight of fancy made real. That road started here, with the prototype for what became the 365 GTB/4. Jeroen Booij plots its journey. Photography Pieter E Kamp.

Several years ago I spoke to Leonardo Fioravanti – the man who, while working for Pininfarina, styled the Ferrari Daytona. It proved to be his flagship design, and the great designer set off on an anthology about the car from the moment we sat down.

‘The Daytona was more or less born by chance. I saw chassis arriving at the workshop on a lorry. One day one was one step ahead in its building process. It came with wheels, an engine, seats and a steering wheel, but it was otherwise naked. On seeing it I thought to myself: we are doing it all wrong. I started sketching and came up with a proposal for a new car. Farina told me it was impossible to replace the 275 already, it was still too new. But he liked what he saw. And so we showed it to Enzo Ferrari, who fell for its profile but not so much for the front.

‘I had taken account of the 275’s very long wheelbase, which had made the design rather overbodied. We altered the front and asked Ferrari once more for his opinion – which was most unusual – but it was good. He liked it.’

And so the 275’s replacement arrived after just over 800 had been built. There had been six prototypes too, the very first of which had a completely different nose from the car we came to know as the Daytona – something Fioravanti hadn’t told me. And though I knew nothing about it at the time, that very car was in the process of getting restored not far from my home in The Netherlands.

Gerard van Bergen bought this unique Ferrari in 2003 without knowing what it was. As a hobby, he has restored several classics together with a friend, mostly Mercedes-Benzes: ‘We did a 300SL Roadster W198, a Gullwing, a Pagoda W113 and a 190SL W121, which we turned into an SLR. But slowly I became more interested in Ferraris,’ he says. ‘I bought a Ferrari Testarossa, an F512M and I restored a crashed Ferrari F40. But I wanted to find a 1960s GT, and then I came across this car in Switzerland. It was in a sad state but I managed to get it running and took part in a club rally in 2003. Some of the older club members asked me: “Do you have any idea what that car is?” And I would reply that it was something that needed an awful lot of work. But I found out that it really was a very special car and I became desperate to find out all of its history.’ A long hunt ensued.

Above and right At first glance, it’s any Daytona, though the tail is quite different in detail; 36-valve V12 is unlike any other Daytona engine. Right and below right Interior looks rather more 275 GTB than Daytona, unlike the bodywork – though the definitive nose treatment was yet to come.

During his research, Van Bergen was in touch with Ferrari historian Marcel Massini, who was adamant that it was indeed a prototype. With chassis number 10287, it turned out to be the first one of those six, based on a 275 GTB and which came to life at Scaglietti’s workshop in the spring of 1967, under the codename ‘Study 109’. It was used for testing at Modena Aerodrome, and sold before the 365 GTB/4 was unveiled in 1968, changing hands for 8,000,000 Lire (about the same as a new 275 GTB) and registered in Rome.

The next owner, Gian Paolo Salgarella of Bologna, paid 3,000,000 Lire in 1972, at which point the car was said to have been damaged. Shortly after, it was exported to the US, where it found new homes in Georgia, Mississippi, Illinois and finally southern California. Somewhere in-between, the car underwent a bit of a facelift, being fitted with headlights from a 275 GTB, and it changed in colour from grigio to rosso. Van Bergen believes that must have been to make the car more attractive for sale.

‘A prototype didn’t mean much to many people in those days in America,’ he says. ‘Ferrari 275 GTBs had been rising in value for some time, which must have had something to do with it.’

The prototype found a new owner in Dutchman Henk van de Meene in 1988. He stored it in his Swiss garage and sold it again in the early 1990s to Carlo Perego, also in Switzerland. Another ten years passed before Van Bergen became its ninth owner. He soon set about a ground-up restoration.

While Van Bergen’s first thought was to carry out the work himself, together with his restoration friend, it soon became clear that the job was really meant for specialists. ‘We were doing an inlet manifold when a Ferrari club member came over to take a look. “What on Earth are you doing there? I know you like Mercedes, but this is way too heavy. It needs to be lighter”, he said. And so we started all over again.’

With just a few photographs on which to base the work, it became clear that the body had been modified, too. Says Van Bergen: ‘The rear wings were pretty bad, and needed lots of new metal.’ Meanwhile, he began a search for light units of the right type. Not easy. ‘The Fiat 850 Coupé has very similar headlights, but the glass on these is ribbed. We could only just see on the pictures that the Ferrari’s were not. It took me two years to find out what they were, Carello number this and that. Then I found a pair in the US and the guy wanted $1250 for them. Yes, I could have had new lights made, but I wanted the real thing. I always thought it would be worth it in the end.’

Judging by the photographic report he keeps with the car, much work was carried on that basis. The leather-clad aluminium dashboard; the factory paper that’s been used behind the door plates; seat frames that have been restored and re-coated; the paint primer that was applied to the car’s body a year before it went to the spray booth, so it was perfectly hardened; the cellulose paint that was made to original specification…

And then there’s the engine. Under that long bonnet you’ll stumble upon the world’s only 243-type Lampredi V12 engine. It’s an experimental dry-sump unit, with twin spark plugs and three valves per cylinder. The block is based on the 330 GT’s 4.0-litre, bored out to 4380cc, but Alex Jansen of Forza Service in Oss, who rebuilt it, believes the cylinder heads were specially cast by Ferrari. ‘The are totally flat, which means the combustion chambers are formed by the hollowed-out tops of the pistons. These flat heads also mean that the camshafts, two per cylinder bank, fit under a single cover. This means there was ample space for the twin spark plugs.’

What did remain unchanged was the location of the six Weber 40 DCN carburettors on top, although the characteristic crackle-black air-filter box had to make way for paired open trumpets, as on Ferrari’s competition cars. There may even be a little more competition thinking in this unique engine: Ferrari’s P4 racers had a similar spark plug layout, plus double inlet valves with one exhaust valve per cylinder.

There’s no doubt it gives a spirited sound, too. Van Bergen switches on the petrol pump and turns the little key. The starter rotates slowly and it takes a few revolutions before all 12 cylinders catch and the engine fires with its characteristic metallic rasp. ‘This is not the ideal car for twisty B-roads,’ says its caretaker above the noise of the rumbling V12. ‘It needs revs and runs at its finest when you shift gear at 7000rpm.’ But before getting even close to that, he warms the engine gently. Once the gauge reaches 90ºC, he floors it and the prototype dances from one roundabout to the next – leaving the everyday traffic behind and drivers looking puzzled.

At lower revs the engine sputters and coughs now and then – that’s thanks to the cam timing, says engine builder Jansen – but, as soon as a straight turns up and the revs rise, it breathes properly and it’s then, when the revcounter needle jumps like the frequency needle-gauge on an amplifier, that the goosebumps break out.

In comparison with any modern sports car or GT, you sit high in the leather-clad bucket seats, and the consequent clear view ahead is aided by slim windscreen pillars. The long nose stretches out in front while, immediately ahead, the instruments are recognisably those of a 275 GTB, though the dashboard itself is calmer than that of Daytona production cars.

The odometer reads 32,400km – the restorers have resisted the temptation to put it back to zero – and Van Bergen has added few since the restoration was completed. It has travelled, though, notably to the manicured lawns of the Concorso d’Eleganza Villa d’Este and back via a little detour to Maranello, to show the car to Marco Arrighi of Ferrari Classiche – all that had been missing was the coveted Classiche certificate. That turned out to be quite the final hurdle, as Arrighi, together with Marcel Massini, found sketchy pictures of the car, just clear enough to show that it had left Maranello with triple tail-lights rather than twin pairs. And so Van Bergen had to take a hacksaw to the tail of his just- restored car; Ferrari, in an unusual gesture, granted Van Bergen’s team the opportunity to make the change, rather than insisting on carrying out the work itself. ‘That was fantastic,’ he says. ‘Even though it was Ferrari Classiche, it would have felt to me as if I was handing over one of my children to an unknown surgeon.’

And so, despite ups, downs and the near-impossibility of tracing the correct parts during a process that took almost ten years, the man is extremely pleased with the result. And so is Ferrari, which rewarded the restoration with a prominent display in its Maranello museum.

Does Gerard van Bergen still dream of any other car? He takes just a second or two before suggesting a Daytona Competizione. ‘It needs to g extravagant, he says. ‘An ordinary Daytona is just too common for me now.’

‘Under that long bonnet is an experimental drysump engine, with twin spark plugs and three valves per cylinder’