Lancia’s Q-Car Beneath the bonnet of this conservative-looking Lancia Thema executive saloon lurks a Ferrari V8 with a unique configuration. Story by Richard Heseltine. Photography by Michael Ward.

The 1980s witnessed its fair share of horrors. There was war, record unemployment and, worst of all, big-haired pomp rock. In so many ways, and on so many levels, it was a hideous time and this was reflected in the cars we bought. It was the decade of the bland-mobile; where the angular ‘origami’ look of the previous decade made way for smoothed-over amorphous blobs, each more non-descript than the last. If there was a theme in car design, it was that outlines should upset no one and inspire even fewer.

The ’80s did, however, witness an interesting shift in the way cars were engineered. It was the decade of co-operation and collaboration between manufacturers as spiralling research and development costs meant firms were forced to look further afield than the nearest parts bin. Budget sharing became the norm. Expediency took precedence over principle which led to some intriguing alliances, witness the ‘Type 4’ scheme which spawned, in a roundabout way, the car pictured here: the mighty, if misunderstood, Lancia Thema 8.32.

To fully grasp the Thema’s importance in the greater scheme of things, first you need to be aware of the project that preceded it. In the mid ’70s, Lancia and Saab worked together to produce, brace yourself, an air-blending heater arrangement. This joint-venture proved so successful that the Italo- Swedish partners embarked on a much grander undertaking: a new breed of luxury mediumsized saloon car.

In the event, the Thema and the Saab 9000 had little in common when it came to the overall structure: just 12 pressings within the engine compartment, inner doors and glass were shared between the two cars. The major payoff concerned the amount of time saved at the research stage: Lancia was able to provide Saab with information concerning transverse engine installations, while Saab’s experience with anticorrosion techniques proved a welcome boon, as did its knowledge of ventilation systems. This marriage of convenience ultimately paved the way for the Fiat Croma and Alfa-Romeo 164, which shared the Thema’s platform, but there were one of two slight problem-ettes.

Despite breaking moulds and blazing trails when it came to inter-marque interaction, the sort of thing that is now commonplace, the Thema faced two near insurmountable hurdles when introduced to Blighty in 1985. First of all, there was the small matter of Lancia’s standing in the market place. The marque’s parent company Fiat had been painfully slow to react to the rust scandal at the end of the previous decade; the same one that in-time became front-page news in the tabloids. It largely ignored the problem, but the words ‘Lancia’ and ‘rust’ became synonymous to the point that ignorant prinkles still associate Italian cars with the dreaded tin worm all these years later. In the mid ’80s, the issue was fresh in car buyers’ minds. So much so, the quandary was how to convince deeply cynical and suspicious buyers that their new purchase wouldn’t dissolve quicker than Alka-Seltzer at the first sign of inclement weather.

The other rather pressing issue was how to persuade the nation that Italy could make decent big cars. The five-door Gamma fastback and Alfa Romeo 6 had sold in tiny numbers in the UK so the future appeared bleak. The thing is, the Thema did sell well, at least initially. That said, Britain typically lucked out of getting all the variants, and there were several. Initially offered in 122bhp eight-valve ie, 165bhp LX Turbo and 150bhp PRV (‘Douvrin’) 2.8-litre V6 automatic forms, the line-up was augmented by the 120bhp eight-valve LX two years later. Further facelifts and engine options followed (the insertion of the 3- litre 12-valve Alfa V6 making for a superb all-rounder) to ’94, as did the option of a five-door estate which also never made it to these shores. Sold in three distinct series’, the end of the Thema corresponded with the termination of Lancia dealer network in the UK. Given what Lancia has become over the past few decades, that probably is no bad thing.

The Thema variant that continues to set enthusiasts’ hearts aflutter, however, is the 8.32. During the development phase, the engine bay and subframe were designed to accommodate a wide variety of potential powerplants – including Ferrari’s all-alloy V8. The 8.32 (eight cylinders, 32-valves…) was announced amid much hoopla at the April ’1986 Turin Motor Show, Lancia’s PR bods claiming it was the world’s fastest and most powerful front-wheel drive production car. This was more than mere marketing hype although, as is to be expected, not all was quite as it appeared.

Outwardly identifiable from its lesser siblings by discreet black-on-yellow badging, chunky 15in five-spoke ‘star’ alloys and an electronically-operated tail spoiler that lifted at speed for additional downforce, these largely hand-built machines were trumpeted as being the closest thing to a four-door Ferrari. That was a bit of a stretch, not least because the press releases neglected to mention that the house of the Prancing Horse didn’t actually make the engines: it supplied tooling to Ducati which, in turn, manufactured them to Lancia’s specification. Though essentially the same unit as fitted in the 308/328, the 180deg crank was replaced with 90deg throws in order to help balance out the inertial forces.

What really hindered the model’s chances, if only in the UK, was that it was egregiously expensive. By the time the 8.32 went on sale in Great Britain in early ’1988, it cost £37,500. That was roughly 20K more than a fully-loaded Turbo which closely matched it for pace, and it was only ever offered in left-hand drive configuration. It is no great surprise, therefore, that only nine were officially imported. But that was then. Today, an 8.32 represents a very different proposition. A good, usable example such as the gorgeous ’1987 Series 1 cars seen here can be picked up in the high teens, and several have since arrived here from Germany and Switzerland.

Cost aside, what really did for the 8.32 in period was the small matter of it looks. It was too similar to more lowly models to be taken seriously, and not handsome enough to be coveted. Today, that sameness to other models only increases the attraction: it should be a great Q-car. And the styling has aged well, the outline by Giorgetto Giugiaro being soberly discreet; as soberly discreet as any car resplendent in a searing shade of Reflex Green ever can be, that is.

Inside, the 8.32 is spacious with plentiful head and legroom, the hand-stitched memory-programmable seats embracing without pinching. The veneered burr walnut dashboard, meanwhile, is stacked with electronic gadgetry which does take on a bit of a ‘disco inferno’ vibe when the ignition is first engaged, mind, but that rather goes with the territory. Once fired, the all-Italian V8 doesn’t exactly erupt into life. There are no theatrics; it’s very restrained. Take-up on the reinforced clutch is such that there is no room for slippage: it’s either in or out. The regular five-speed Thema ’box was carried over but with a taller first gear and molybdenum-coated synchromesh cones, and it copes admirably with the 215bhp and 209lb ft of torque loaded on it, although the actual shift action is a bit rubbery but you soon acclimatise. Not that you are called upon to race up and down the ’box as 80 per cent of peak torque is available from as low down as 2500rpm. It will pull from as little as 1000rpm in top without so much as a murmur. There isn’t much in the way of torque steer, either. It doesn’t launch sideways.

But – and it’s an important but, don’t approach the 8.32 expecting a backroad tearaway. It’s way too refined for that. Throttle response is crisp and acceleration strong regardless of gear, but it isn’t particularly choral until the V8 is revving off its axis. By this time, you are comfortably into triple digits. Either that or heading for a prison cell. It’s a free-spinning unit, and sounds magnificent in the upper reaches, but most of the time it’s relatively quiet; disappointingly so. The idea of a discreet super-saloon appeals massively, but such an engine really deserves to be heard.

Arguably, the 8.32’s best feature is it steering set-up. The ZF Servotronic system reduces power assistance at higher road speeds (rather than engine speeds) and it feels beautifully weighted at all times. You are left in no doubt as to which wheels are driven, mind. Given that 55 per cent of the car’s 1399kg (3086lb) weight is on the front wheels, the 8.32 is going to understeer, but it’s nowhere near as pronounced as you might imagine. Not even close. Easing off the throttle a little mid-bend pulls the nose in on to a tighter line, but tailout shenanigans require bravery/stupidity and a great deal of provocation. That, and plenty of run-off area. Broads in Hertfordshire are not the right place to play Earl of Oversteer in someone else’ car. Smooth driving is rewarded with a reasonably neutral cornering stance to the point that it never feels like it’s about to spill unless you do something really stupid.

The car’s ride quality is also better than expected. The 8.32 shares the same basic set-up as other Themas – MacPherson struts, lower wishbones, antiroll bar up front, MacPherson struts with transverse links and anti-roll bar out back, and there are no clonks or shudders through the structure over calloused asphalt. It absorbs the worst of the bumps commendably well. The braking arrangement – a Bosch anti-lock system with large ventilated discs, also stops the car four-square, the 8.32 being the first Italian production car to be equipped with ABS as standard. As for the vexed question of whether you would want one, it all rather depends on what you are after.

The 8.32 isn’t a factory hot rod, nor is it a work of great artistry. It is, however, comfortable and refined. That was what Lancia used to be all about, let’s not forget. This is a car in which you could cross continents in a single bound, and arrive at your destination feeling unruffled. It also serves as a reminder of a time before Fiat threw in the towel. Yes, it might share its DNA with other marques, but there was no ‘badge-engineering’ here; no applying the Lancia name to cars that are clearly undeserving of such an honour.

Not only that, it has pedigree. The union of Ferrari and Lancia previously resulted in such icons as the D50 Grand Prix car, the Stratos and the LC2 Group C challenger. That’s pretty exalted company regardless of which subcontractor actually made the 8.32’s engine. As pub ammo bragging rights go, having the legend ‘Lancia by Ferrari’ emblazoned on your car’s cam cover beats an M-series or AMG logo any day of the week.

Thanks to: Andy Heywood (www.mcgrathitalian.co.uk) 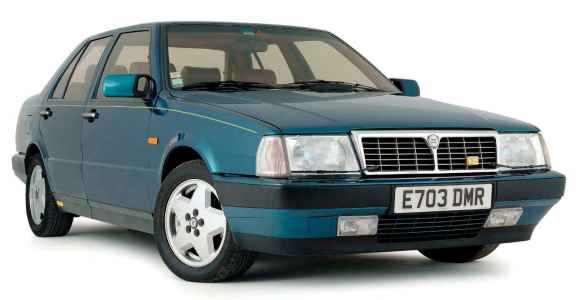 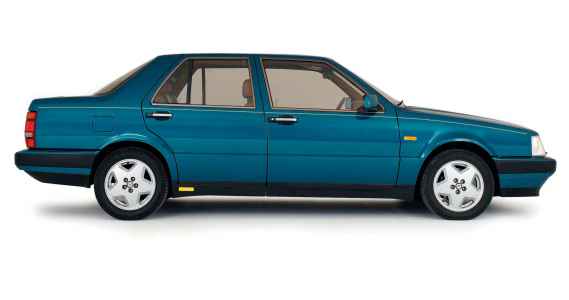 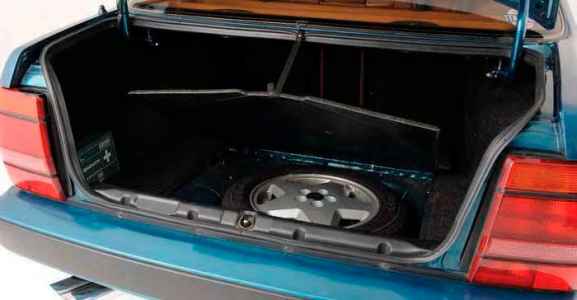 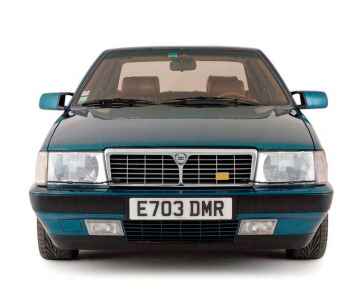 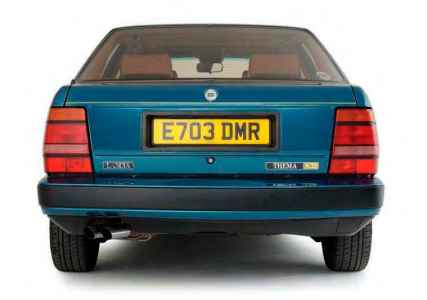 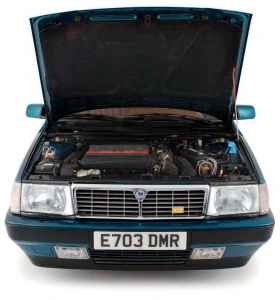 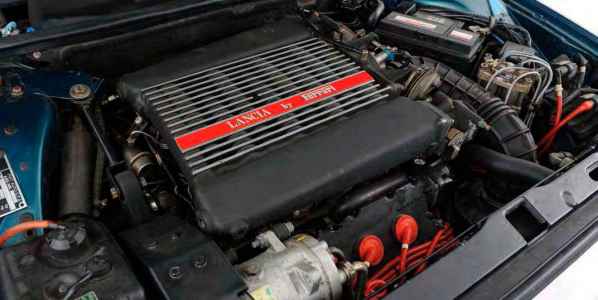 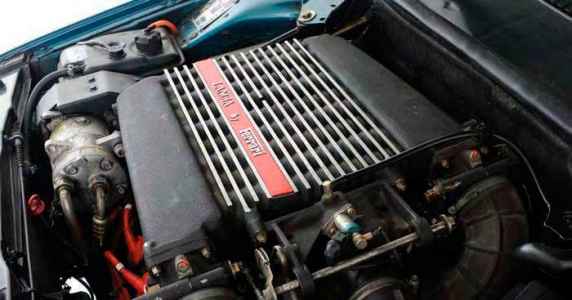 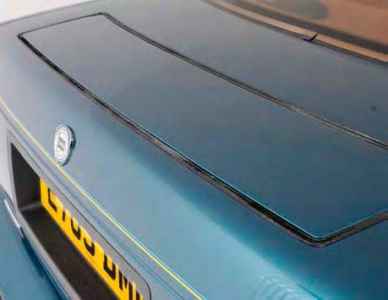 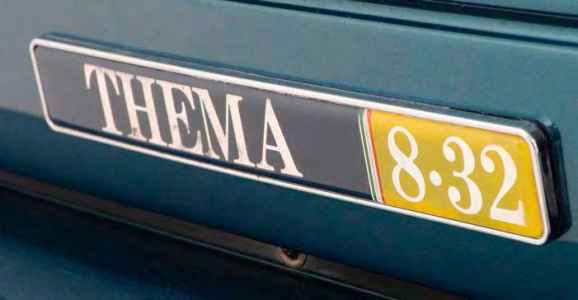 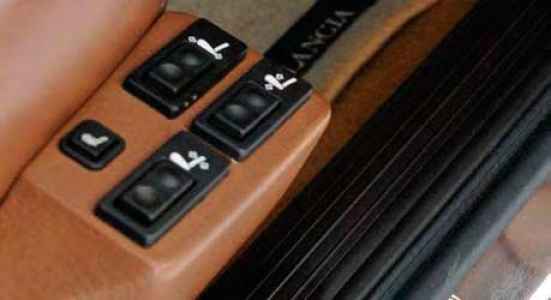 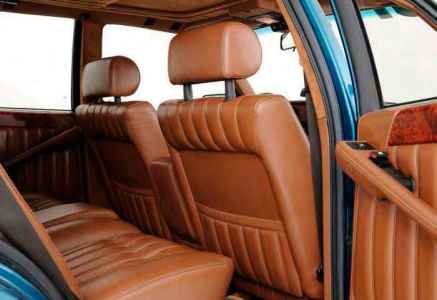 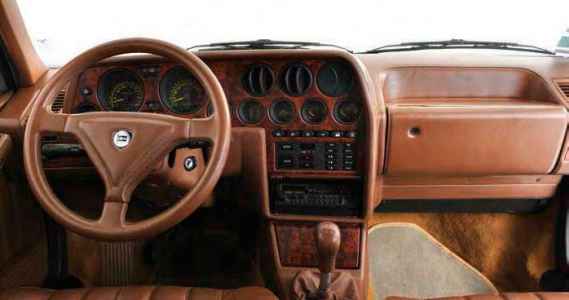 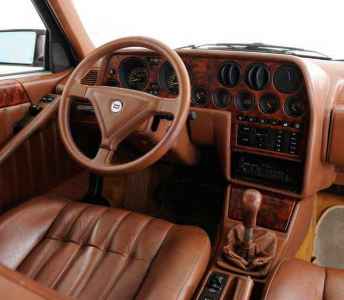 ABOVE: Unlike its Ferrari 308 GTB relative the Lancia unit does not have a flat plane crankshaft. TOP: Discreet badging refers to 8-cylinders and 32 valves. The engine is unique to the Thema.

This is the 215bhp version without catalyc converter..with cat the engine offered only 205-204bhp