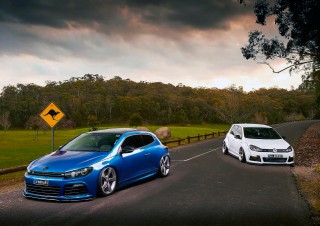 As you’ll no doubt have read before, Australia is not a great place to own a modified car. Tuning laws mean minimal mods can be made without needing an engineering certificate and even if you have everything signed off, ignorant police can still fine you on a whim with little in the way of recourse. That’s why Australian petrolheads, despite having spent the best part of the last 50 years either modifying muscle cars or JDM metal, have started switching to European cars recently, as their more subtle styling and larger array of stealth mods means there’s less likelihood of being harassed. Of course, that’s not to say those with Euro cars don’t go over the top with them sometimes, but in general, the VAG scene there is pretty low-key. 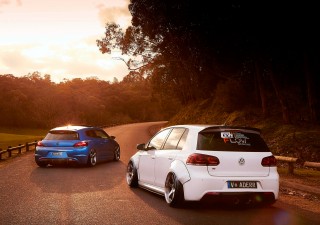 All of which brings us nicely to these two Melbourne-based cars. The Scirocco R, owned by Vinh Nguyen, is an archetypal Aussie VAG build. Air suspension, subtle ‘OEM+’ styling mods and stealth engine bay work means this car can fly under the radar and still go fast or lay frame when needed. The Mk6 R, however, is a completely different story. While it shares some of the same mechanical and suspension mods as Vinh’s Scirocco, it’s clearly not a shrinking violet, running the world’s first Ingo Noak overfender kit not fitted to an Ingo Noak- owned machine (one that also had to be extensively modified to fit the five-door body shape), a set of 10.5x19” Volk Racing TE37 SLs, and numerous other exterior and interior mods besides. It’s so highly modified that Jon really had to get his car fully engineer-certified as otherwise he would have had to deal with endless police harassment. Now, it should be noted that he still gets hassled anyway but at least he can point to the certificate to avoid getting fined or receiving a dreaded yellow ‘defect’ sticker, which would mean he’d have to remove all the offending mods before he could legally drive the car again.

In terms of what led these owners (and friends) down such different paths, let’s start with Vinh. Coming from a JDM background, it was exactly that aforementioned desire to avoid hassles while still driving a fast, enjoyable daily that pushed him over the edge. After owning everything from an RX-8 to an Evo VIII with a built motor running E85 and making 400awhp (with a Supra, WRX and a few Hondas in between), he was initially hesitant to consider a Euro ride, even deriding his Golf-owning friends for having what he used to call ‘girl’s cars’. 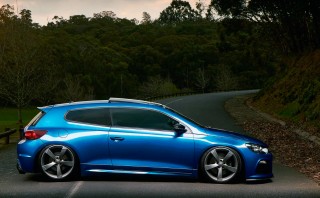 However, after one of his friends got sick of the insults and insisted Vinh just tried driving his R, he had an epiphany. “I thought ‘oh, it’s got this really nice luxurious German feel’, whereas my Evo was real tinny. I’d close the door and it  didn’t have that nice Golf thud. And I also noticed these Golfs would keep up with Evos or even beat them, depending on the mods. They could make really stupid power for a turbo four”.

Combined with the fact Victorian state police started to get really serious about cracking down on illegal mods at the same time (focusing on JDM cars in particular), it was easy to see why Vinh was tempted by the less attention- grabbing Euro side.

However, while Vinh’s mates all owned Golfs, he obviously didn’t end up with one himself as he was drawn to the Scirocco’s curvier, sportier styling instead. And given the power and handling were both in the ballpark for his tastes, too, he pulled the trigger on this gorgeous 2012 example in Rising blue two years ago and hasn’t looked back. Indeed, because he came from a highly-tuned Evo, Vinh modified his then-new R in very rapid order, saying “the very first week I   got my car, it went to a Driver Motorsport Stage 1 tune, but I wanted it to be even faster so I  went back to Tim at Dub Addiction and he hooked me up with Stage 2 straight away. I think the car was like 2+ within about a month of having it.” On top of the engine tune and supporting Autotech high-pressure fuel pump, Integrated Engineering intercooler and APR downpipe mods, Vinh also got Tim to do the ‘must-have’ DSG tune and fit R8 coil packs, a Forge Motorsport Twintake and a carbon engine cover, eventually fitting an Akrapovic Slip-On  Line exhaust, too, after initially going for a  Milltek one that didn’t quite suit his aural tastes. The overall result? 375hp and 339lb ft at the wheels. Plenty for a daily. 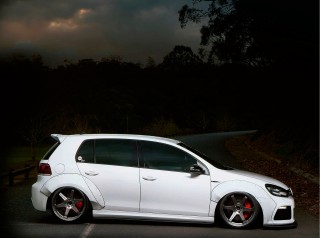 Next up came the requisite handing upgrades, starting with H&R lowering springs, then a move to KW coils, and finally his current air setup – which consists of Bilstein B8 dampers and Air Lift Performance Universal bags, aided by a Whiteline rear sway bar. The reasoning behind this particular air install? Vinh’s history of performance cars. “Even though I went with bags, I didn’t want it to hinder my performance,” he says. “I didn’t want it to be floaty, so because of the Bilstein shocks, even for bags, they handle really well. For the street, they’re amazing. You can still take them to the hills and, yeah, if you’re serious about track, you’ll be running coilovers, but I haven’t taken it to the track yet. Even if I did, I know it can handle a track day.” One thing Vinh hasn’t done is upgrade the brakes yet, simply because he hasn’t done any track days in it, and for street work the stockers are fine.

Getting back to the air, Vinh also loves the extra practicality the system gives him. Stock Scirocco Rs are already pretty low, and by the time Vinh added lowering springs, he started scraping. Coilovers were worse again, apparently rendering the car “pretty much undriveable on the street” but now the bags mean he can drive anywhere and not worry so much about his exterior mods.

These outside addendum again follow the OEM+ look thanks to an Australian handmade Horsch carbon-Kevlar lip (a super-tough custom item business owner Jarek Horsch doesn’t normally do thanks to the unwieldy nature of Kevlar, but one Vinh swears by as it took a massive pothole to even put a tiny crack in it), matching Horsch diffuser, black badges and 19” Audi Rotor wheels – all of which add up to make the already stunning Scirocco shape look even better. 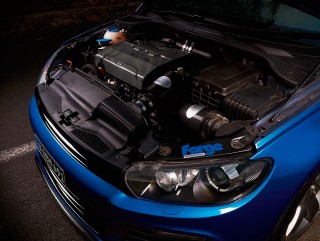 Inside, things are even more reserved thanks to a near-stock interior that only boasts a P3 gauge, the AccuAir controller, Focal 165VW speakers, and a JL Audio 12” sub in the boot with lots of Dynamat around it to ensure decent sound. Along with the air tank, that sub does mean Vinh’s boot is almost entirely useless, but then few people buy a Scirocco for practicality. Plus, there’s a bit of history to that sub, as it’s actually been with Vinh since his very first car and will no doubt be in his next car as well.

It’s subtle but handsome, runs mid-12-second quarters at Melbourne’s Calder Park Raceway, and handles well enough to make hill runs a highly enjoyable experience. Thanks to running on 98 octane, it even doubles his fuel efficiency compared to his Evo, getting around 500km to a tank as opposed to the 250 his Evo could manage. However, like so many car guys, Vinh is already after more, so by the time you read this he will likely be in a brand-new Mark 7 R, which he’s already made a booking for at Dub Addition to add grunt.

As for Jon’s Mk6, that’s obviously a different story altogether, but the origins are nearly identical. Starting out in JDM via a little Honda runabout he purchased as his first car, Jon soon realised the power of the ‘Volk side’ (sorry!) after driving his old man’s then-new Mk5 GTi. “I was originally going to go up the road to get Subway for lunch but the car had a full tank of gas so I thought I’d take it for a spin. I ended up taking it to Albury (300km away) and back, taking some twisties on the way because I liked it so much. The next day, I put my car up for sale on carsales.com.au. It sold pretty quickly and the next day I bought a Mk5 GTi of my own.” 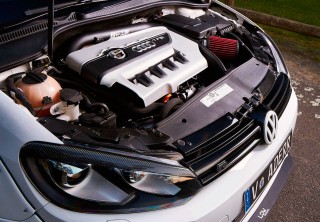 Not long after purchasing it, the modifying bug bit and here the stories diverge. Because while Vinh went Euro to be subtle, Jon saw his move as an opportunity to get creative and stand out. First came the engine mods, with a Driver Motorsport tune and supporting bolt-ons, then came an Air Lift system, about 20 different sets of wheels (culminating with a set of white Fifteen52 Turbomacs), lots more engine mods (including an intake and BoV that made it sound like Darth Vader – hence the plates), and finally, a matte metallic green wrap over the stock black paint. As a result, by the time he sold it (some eight months ago), Jon’s GTi was probably the most famous Mk5 in the country. And it wasn’t long before he started modifying his new Mk6 upgrade, either.

“About a week after I got it, the car had gone to Dub Edition for a Stage 1+ Driver Motorsport tune, intake and downpipe. Then it went to Jay at Von Brothers for a fully bagged Airlift setup that was engineered and installed,” he says. “So in seven days it was already tuned, with bolt-ons, airbags, and an engineer’s certificate. And then it just went from there. I mean, I’ve only had the  car for just over half-a-year now and it’s gone through 12 sets of wheels (not including the OEM wheels) and it’s now wide-bodied and wrapped… it’s been an insane journey.”

Indeed. And, if you’re wondering about the wrap, that’s an Avery matte charcoal one that was added a few weeks after the shoot. 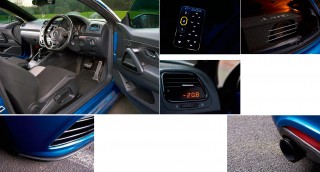 Unfortunately this insane modding schedule, plus a month off the road for bad behaviour, means Jon hasn’t actually been able to drive the car much but at least he has his missus’ Mk4 “two-point-slow” to get him around when his machine is off the road.

Perhaps unsurprisingly, Jon’s not quite done, either. While he’s happy with the ride, handling and looks (constant desire for new wheels  aside), the 270whp of grunt still isn’t enough, so he’s looking at either an F23 ‘Frankenturbo’ or something from the GTX line, and local shop Amplified Automotive recently approached him to sponsor a £4500 audio install as well, so ‘Vaderr’ will continue evolving for some time yet. Hopefully, both he and Vinh will be able to enjoy their cars, no matter what they decide to do with them in future, without too many hassles.

"As long as you can be bothered getting an engineering certificate, you can drive a highly modified car on Australian roads legally" 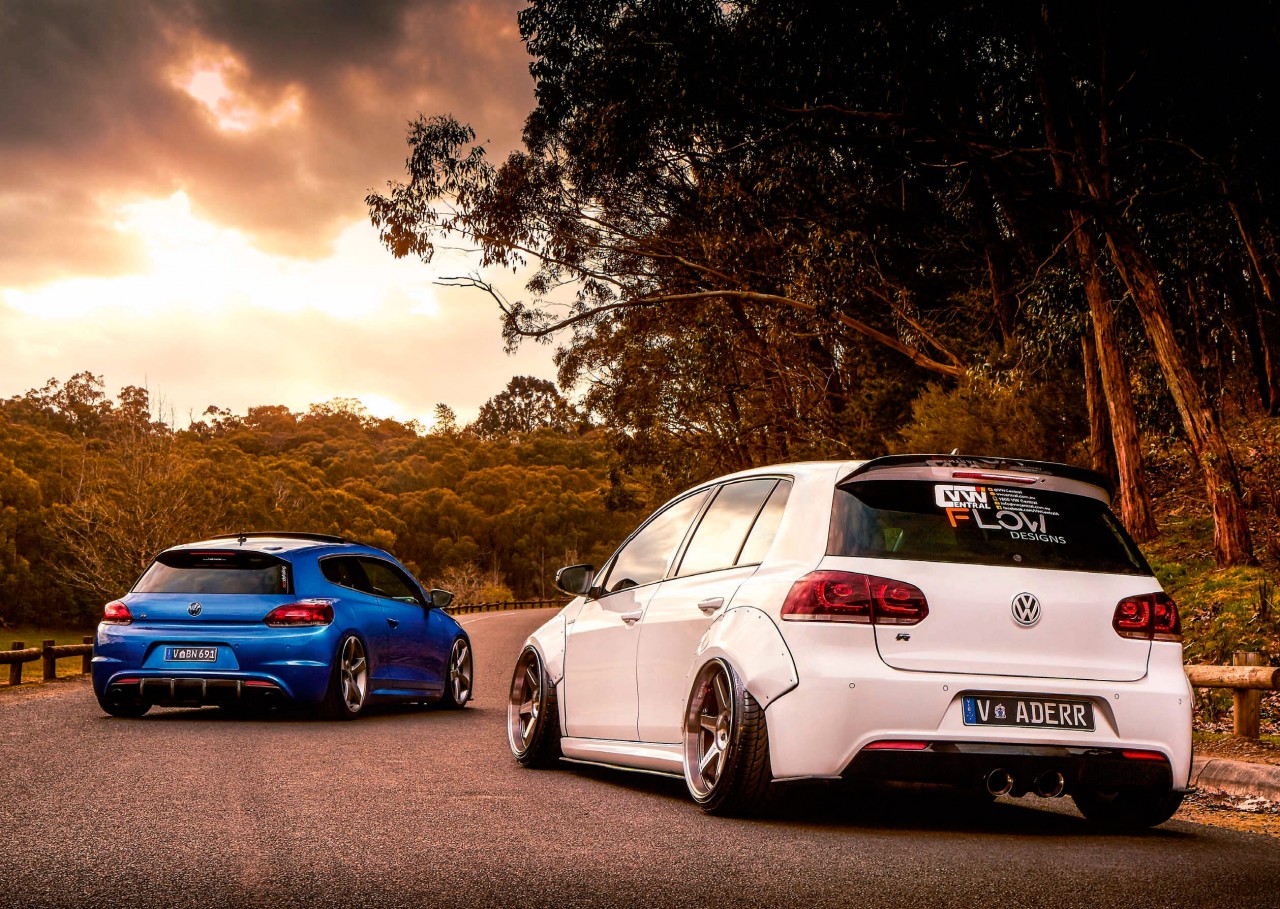 Steve EVIDENCE Sutcliffe
There are no comments posted here yet