Volkswagen Passat B2 Typ 32B 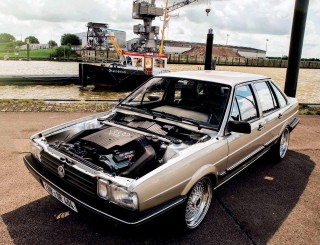 Passat goes V8 and AWD. We like a street sleeper as much as the next man and Tobias Herrmann’s all-wheel- drive, V8-powered Passat may just be our favourite Q-car to date. Words: Elliott Roberts. Photos: Lukasz Markowski.

I’m not too sure how long you have been reading this very magazine, but old-skool followers may remember around a decade back we had our very own VW Santana on the fleet. Until the day we bought the car we don’t really remember having any kind of opinions on the booted odd ball, but even before we fitted the banded steel wheels and chopped the springs (don’t try that at home, kids) we soon began to fall for the car's instant charm and appeal. Despite its automatic transmission and ‘cruiser’ ride, the five-cylinder motor felt solid and as if it would be a great base vehicle to take pretty much anything you could throw at it. Sadly, we lowered the car too much, cracked the gearbox casing on a cat’s eye and the car was scrapped, but we’ve always had a soft spot for the underrated VW saloon and thankfully we’re not the only ones… 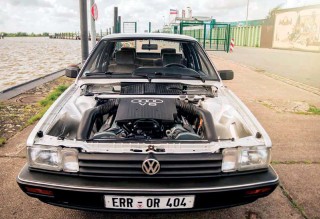 Twenty-nine year-old Tobias Herrmann, who hails from Hamburg, Germany is quite partial to odd VW saloons, too, however, the unassuming silver car you see here isn’t a Santana as we first presumed, but in fact a Passat 32b hatchback. Yes, we were a little confused, too: “Don’t worry, people always think it’s a Santana, but it’s not,” Tobias went on: “The Passat 32b hatchback was actually built from 1985 to 1987 and is basically a Santana with different headlights from a Passat 32b and deeper, Mk2 Golf-style bumpers and of course a Passat badge on the boot.”

Tobias claims he always wanted a VW that none of his other Veedub friends had and in this 1985, 1.6-litre Passat 32b hatchback, which he found covered in dust, lurking in an underground carpark in Hamburg Dehnhaide, he found just that. “I didn't even realise how clean the car was until we gave it a clean and removed the dust,” he told us. The 75ps car came with a 4+E gearbox and was front-wheel-drive (only the 32b Variants were available with a four-wheel-drive syncro drivetrain).

Tobias is a plumber by trade, but clearly this guy is generally good with his hands, as he’s carried out most of the conversion with his own bare hands, and what a transformation it has been: “I always like to have rare cars, but fancied doing something different with the Passat to make it even more unique. I knew right away that it needed 17” BBS RS for a classic look, lowered suspension and also maybe four-wheel-drive,” he continued: “The only thing I couldn’t decide on at the start was which motor to fit.” 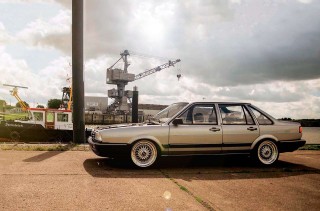 “It was very important to me that the car was clean but there wasn’t really much to give away the fact it had a powerful engine under the hood. I’d always liked the B7 Audi S4 with its 4.2-litre V8 motor, but never had the money at the time to buy one,” he said. Then Tobias came up with the idea of fitting a V8 into his Passat, but a period (well, 1989) 3.6-litre 32v motor from an Audi V8: “I talked to a friend one evening over a cup of cocoa about how I would like to install a big engine. I said to him, what do you think about the Audi V8 engine? He said I was stupid, but I should do it anyway,” he continued, “The engine is extremely light, being made completely of aluminium and has 250PS out of the box, but I wasn’t prepared for how expensive parts were for it.” After doing some research and a bit of trial and error, Tobias discovered that an Audi 80 quattro gearbox would bolt up to the engine and allow him to use the Passat synchro prop and rear diff. “I found a donor Passat Variant, which also donated its transmission tunnel and fuel tank to give us the additional room needed to house the all-wheel-drive hardware”.

Once the gearbox was bolted up Tobias, with the help of Stephan Becker from Brandnew-classic, could then drop the engine into the bay and start working out how it would all mount up. The engine fit was extremely tight and the guys had to modify the V8's exhaust manifolds to ensure the engine would clear the inner wings and the system would flow through to the rear of the car: “We also fabricated a 3” system which runs the length of the car just below the syncro system.” It’s a tight fit, for sure, but a neat one at the same time.

When it came to mounting the engine in place, Tobias fitted a pair of OEM mounts used to fit a five-cylinder engine in the Passat, the two main mounts were custom built and fitted using OEM Audi S2 lower mounts. 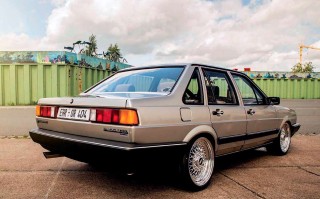 When it came to wiring Tobias said that part was relatively easy, using the Audi ECU: “It was before CAN Bus, so it didn't complicate things too much, although I have retro fitted a launch control system to use mainly for fun.”

In terms of paintwork, the car bodywork remains as it left the factory, with only the engine bay having been cleaned and given a going over in the Flash silver (OEM LP9Y) shade. Once the engine was in Tobias could finalise the suspension, so he opted for Audi 80 KW V1 coilovers up front and those intended for a Passat 32b syncro out back. The coilovers were then wound down 110mm lower than stock over Tobias’ choice of BBS RS: “They’re actually made up from three different sets of wheels and the final dimensions were 8x17” all round. I have swapped from a 205/40 tyre to a 215/35, though, as it’s much flatter with less stretch.” The wheels are enough to make the car stand out and look special, without shouting that these’s a 250ps V8 and all-wheel-drive lurking underneath. Anybody that remembers the original Audi V8 will appreciate that the cross-spoke BBS are actually really in keeping with that car’s look. Tobias of all people should know only too well having his very own Audi V8 in the garage. The man likes a V8, clearly!

So when asked what his favourite part of the car was, Tobias didn’t even hesitate: “The engine bay and the way the four-wheel-drive fits is awesome." Popping the bonnet it’s not hard to see why. We know it’s perhaps a cliche, but the engine really does look like it could have left the factory that way. Okay, so Tobias has cleaned things up somewhat under the hood, and anything that didn’t need to be there has been removed (as much to allow the engine to fit as to look good) but it still has a factory look, which was important to Tobias. 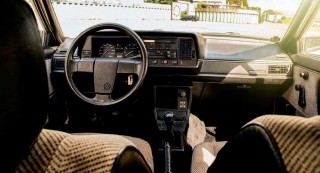 If he could change anything on the car then he would have perhaps have changed the colour, but he insists that the car was so clean and straight that it would have been a shame to do that on this project. So the plan from the start was to build something rare, with four seats that’s comfortable to drive in, has all-wheel-drive and between 240-300hp. Well, we’d say Tobias has certainly achieved his goal. He’s not done yet, though. “I plan to make some changes to take the car to 300ps. I’m considering installing a 4.2-litre V8 from an Audi S6 and would like to polish some of the engine parts on that, but don’t tell the wife.”

If money and time were no object then Tobias’ dream would be a UR quattro with an Audi V8 DTM motor. For anybody else we’d say that’s pretty unachievable but given what he’s done with the Passat and Tobias’ love of Audi V8 motors we wouldn’t rule it out.

“I’m considering installing a 4.2-litre V8 from an Audi S6 and would like to polish some of the engine parts” 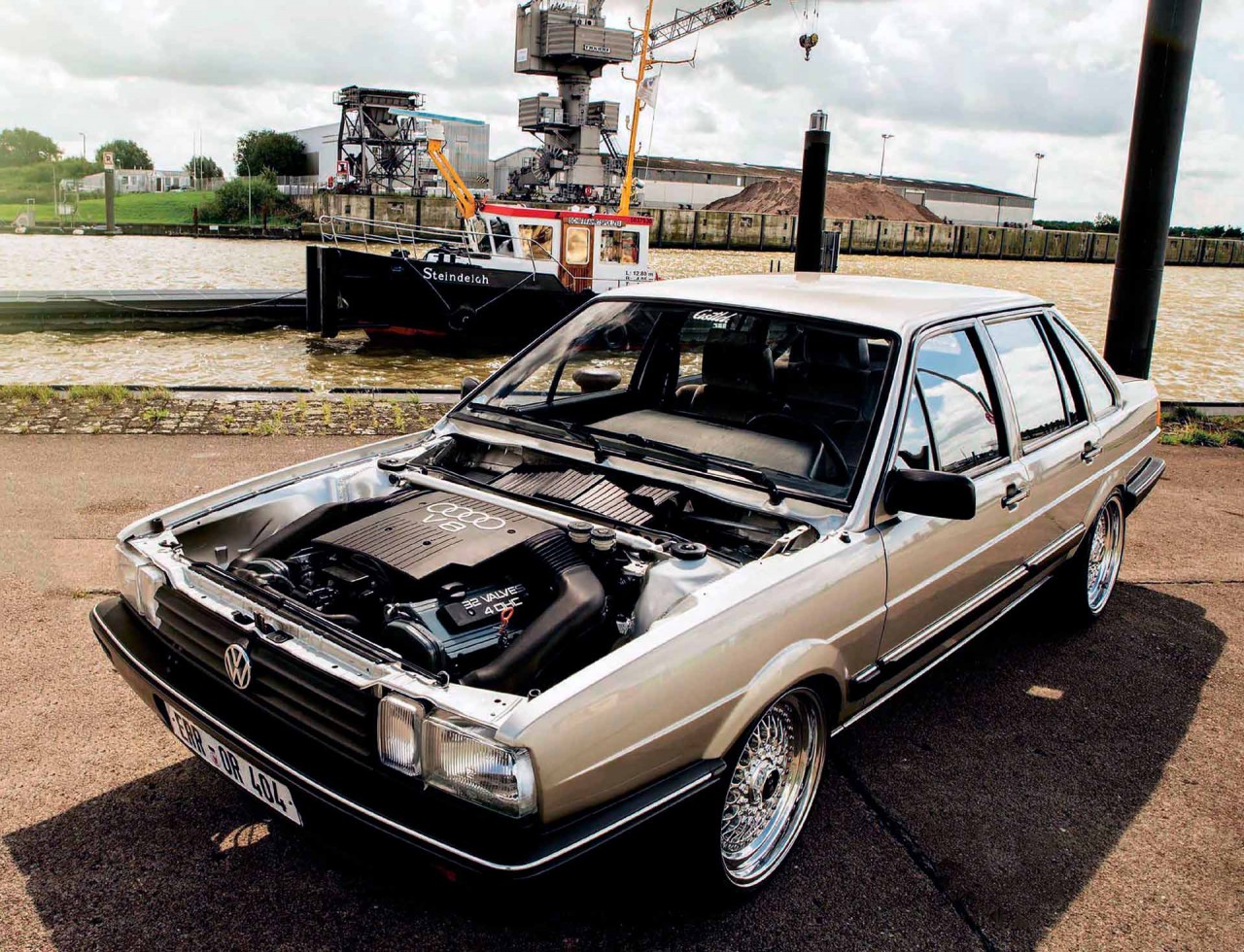 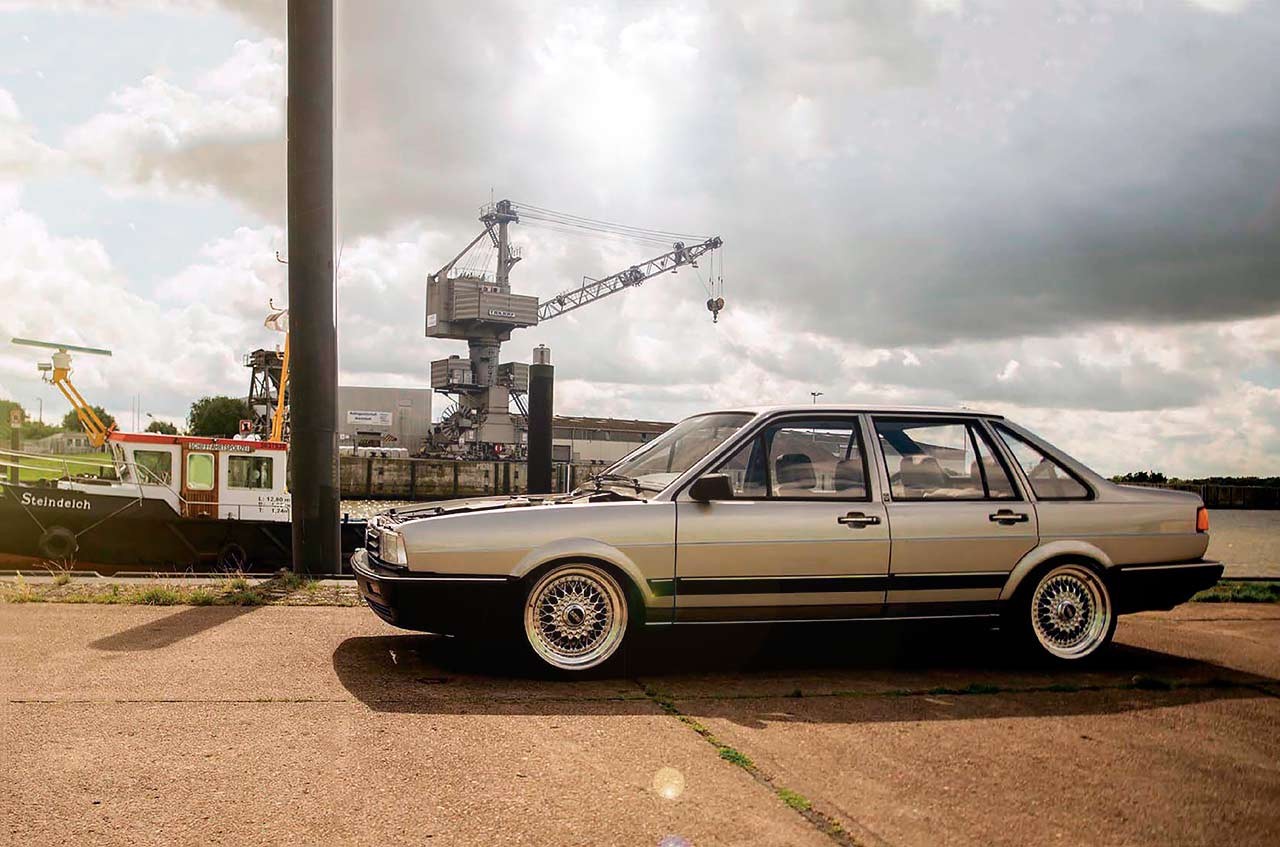 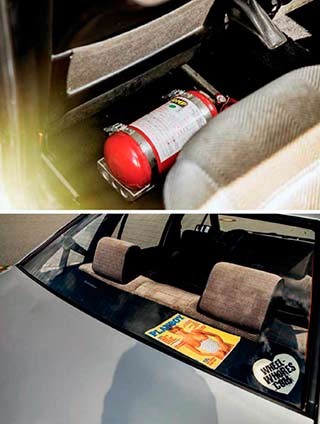 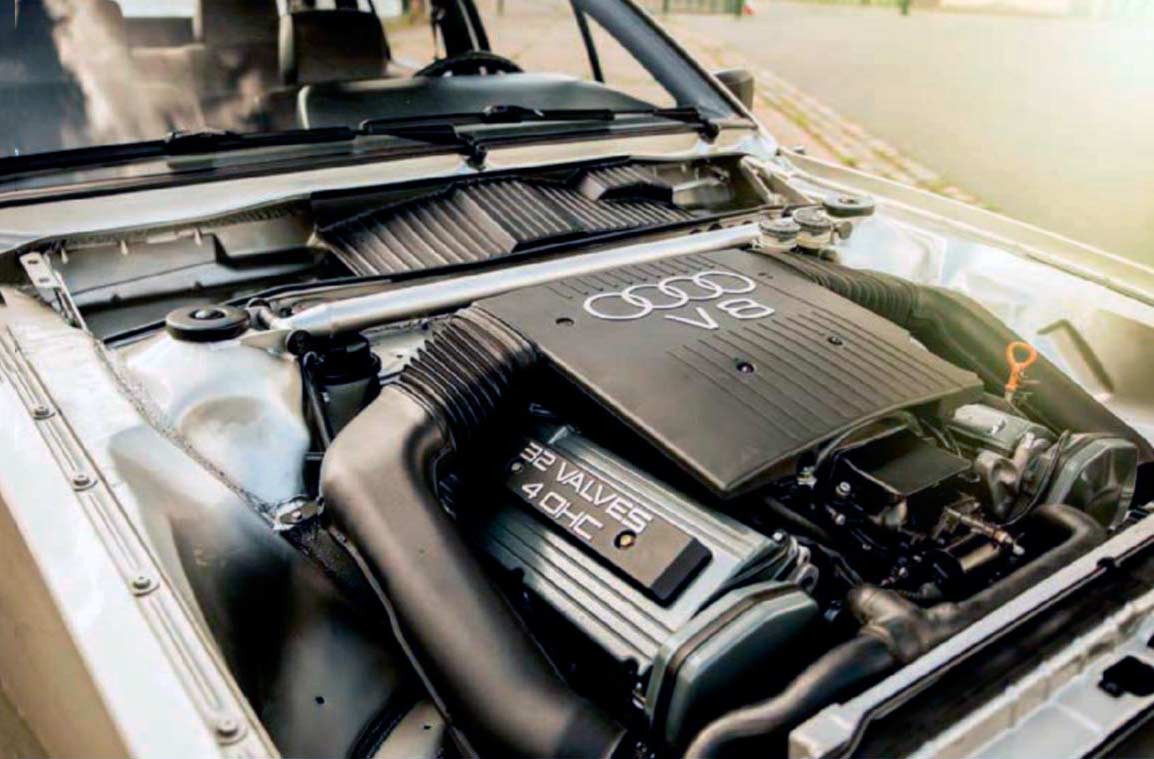 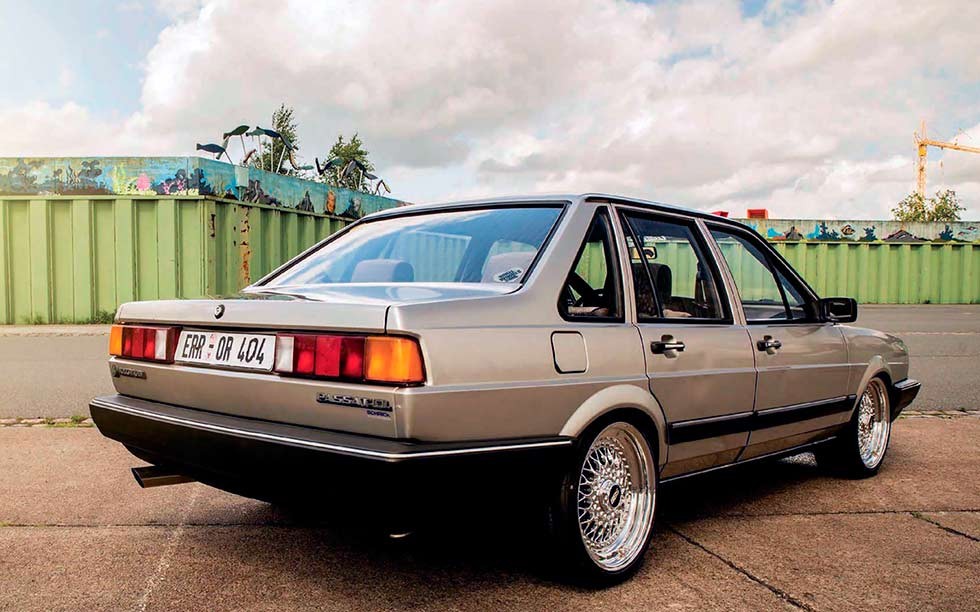 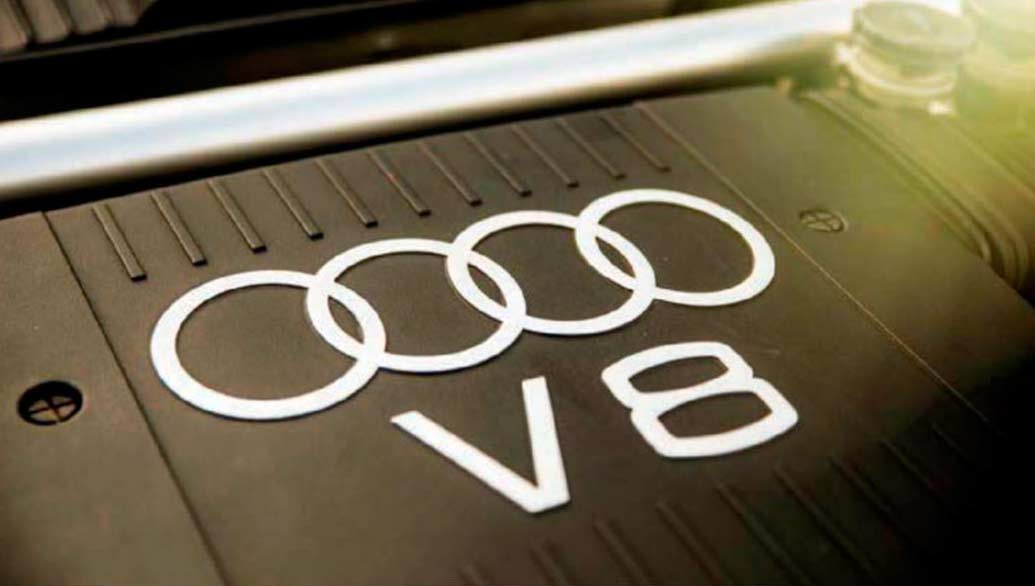 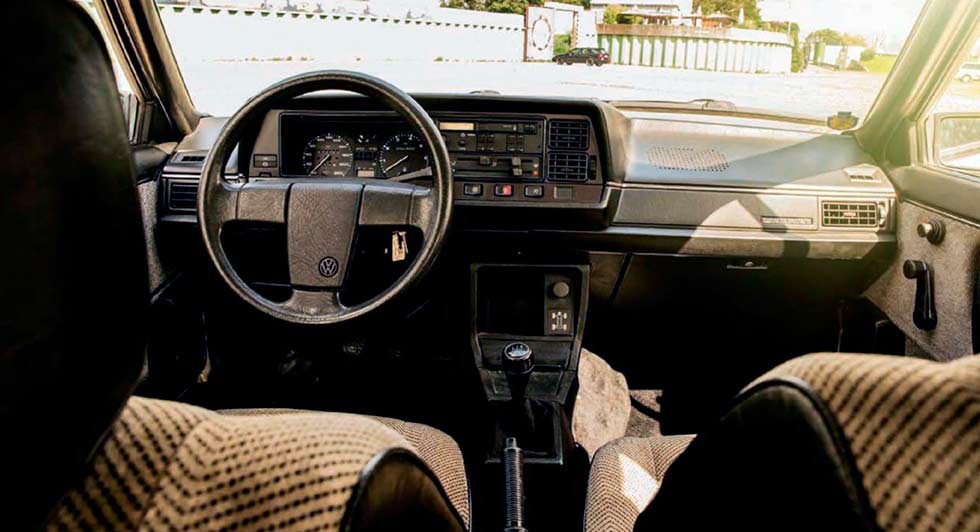 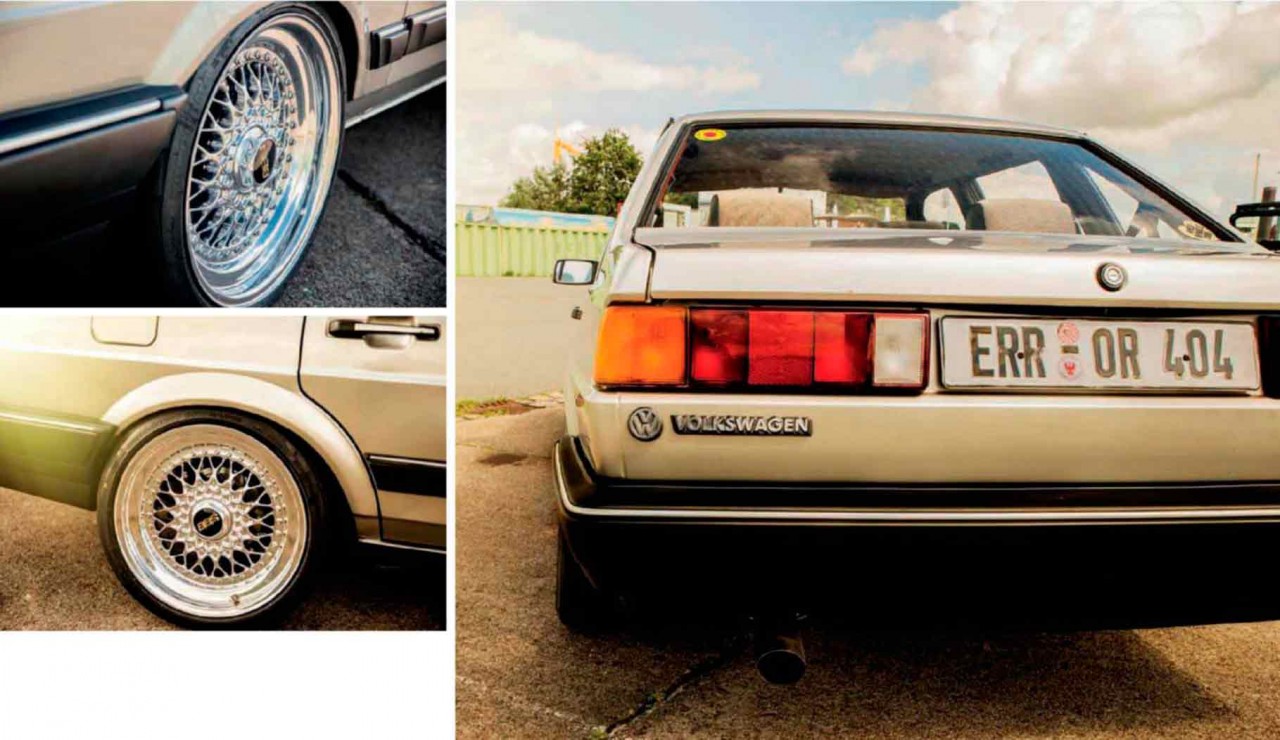 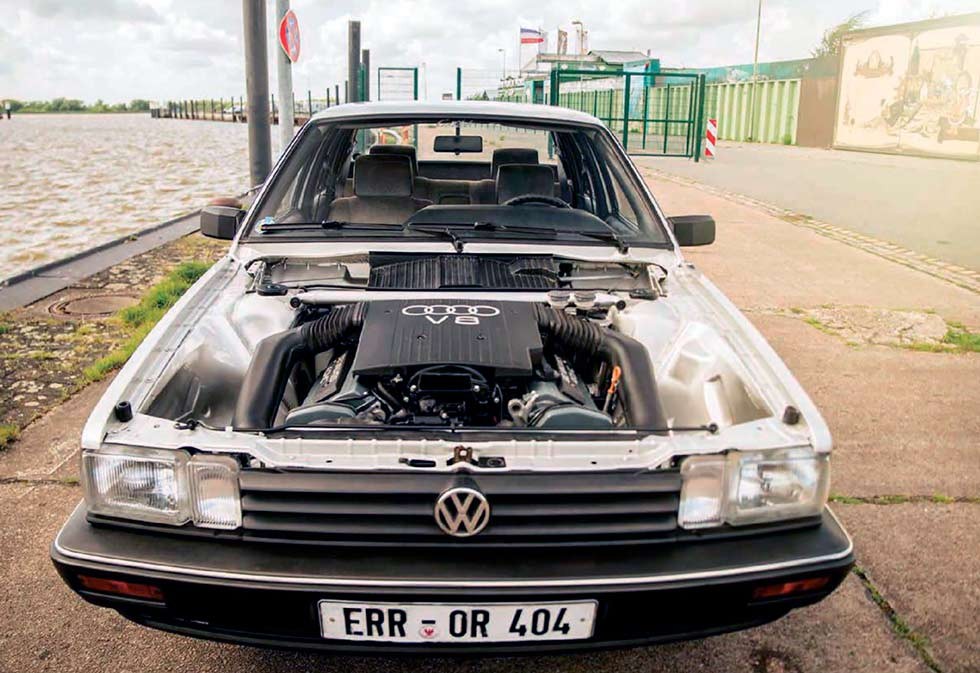 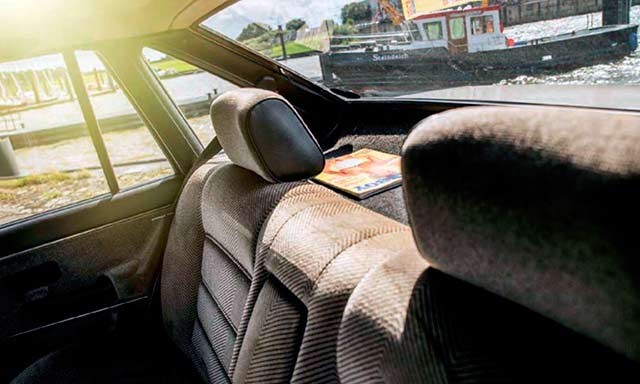 “8x17" BBS were made up from three seperate sets and give the car a similar look to the Audi V8 that donated its engine. Tobias is lucky enough to own one of those, too”

Could you include some performance numbers?

mark barkhuizen
There are no comments posted here yet