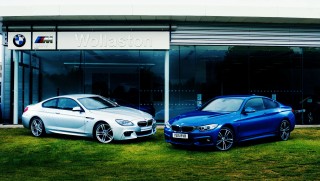 A brand-new well-spec’d 420d M Sport Coupé will set you back close to £35,000. But for the same amount you could buy a nearly-new Approved Used 640d M Sport Coupé from the same BMW dealership with two years BMW warranty. Tempted? We investigate which would make the best buy. Words: Guy Baker. Photography: Tom Begley.

The latest 4 Series Coupé surely has to be one of the best-looking BMWs ever. A striking evolution of the 3 Series, rather than a glitzy marketing afterthought, it ticks all the contemporary coupé boxes. But in the BMW stable it’s not alone. The Four’s bigger 6 Series brother is also a class act. A bit more grown-up and a little less aggressive-looking perhaps – but a seriously desirable Coupé nonetheless. And both these close cousins come with the option of superefficient diesel engines.

In the case of the 4 Series it’s the 420d that is most in demand – in 2015 guise the lure of hothatch performance combined with an impressive fuel consumption figure of 62.8mpg make it the default choice. An M Sport 420d will set you back £35,495, or if you fancy an xDrive version – like the car you see here – then you’ll need an extra £1500. F13 6 Series diesel buyers have just one choice – the mighty 640d. A new one would have set you back close to £70,000 but thanks to depreciation you can now buy a late 2013 or early 2014 Approved Used M Sport example, with a lowly 15,000 to 20,000 miles on the clock, for that same £35,000. And the performance is close to breathtaking. Two brilliant contrasting diesel coupés, both possessing BMW warranties, and both available for the same money. But after three years of ownership, which will leave you with fonder memories?

Slice of the action

Beauty may be in the eye of the beholder but few BMW aficionados would dispute that these two coupés are among the most pleasing models to look at on UK roads today. Sleek and purposeful, their exterior styling makes them serious objects of desire. The 420d M Sport in particular gleans admiring glances wherever you go – especially in striking Estoril blue. Like a Hollywood heart-throb, this 4 Series boasts chiselled good looks and almost perfect proportions. Longer than the old 3 Series Coupé and claiming a wider track – especially at the rear – and more pronounced wheel arches, the 420d M Sport also sits lower to the road and possesses the lowest centre of gravity of any current BMW.

With short overhangs, a stretched bonnet, that setback passenger compartment, shallow frameless side windows and a stretched sweep into BMW’s signature Hofmeister C-pillar, the 420d M Sport exudes dynamism. And the Coupé’s aggressive face leaves other road users in no doubt as to its intent. The agile and engaging driving experience lives up to the looks, too, despite the 420d’s unsophisticated four-cylinder diesel soundtrack, and relatively limited performance. Punchy rather than potent, BMW’s Drive Performance Control enables you to instantly set the driving experience to match your mood, whilst accurate quick steering, a precise eight-speed optional automatic gearbox and impressive braking complete a near-perfect contemporary sports coupé drive. Few buyers will be disappointed with a 7.3-second 0-62mph time, a 62.8mpg combined fuel economy figure and a low 119g/km CO² rating. A high-quality feel to the cabin and a surprisingly capacious boot complete an appealing overall package.

For the same outlay, however, you could be relaxing in the altogether grander surroundings of a 640d M Sport Coupé cabin, with an even plusher finish, deeper seats, greater in-cabin storage and a lot more elbow room. A refined GT car in all respects, the F13 640d is not just longer, lower and wider than its predecessor, it’s also a good deal more spacious and luxurious. And it looks pretty darn good, too. More elongated and curvaceous than its smaller 4 Series sibling, the Six’s sweeping bonnet, sloping side lines and convincing rear-end styling make this preface- lift F13 one of the best looking coupés around.

Style-wise the family resemblance is unmistakable – especially when viewed from the rear three-quarter – but when it comes to performance these two cars are poles apart. The 640d packs a lot more grunt; with a 5.3-second 0-62mph time this is one seriously quick diesel. And the Six’s 465lb ft of torque (which is available from just 1500rpm) combines brilliantly with BMW’s ZF 8HP eight-speed automatic gearbox with steeringmounted F1-style paddles, allowing for super-fast shifts throughout the rev range. The braking is epic, too. But it’s not all perfect. At speed on B-roads the 640d isn’t as quite as lithe or responsive as its smaller 420d M Sport cousin.

Despite being objects of desire, running cost considerations will still loom large in any buying decision. Thankfully both coupé contenders are as thrifty as they are nifty. Over a typical three-year ownership period a new 420d M Sport will set you back an estimated £2205 in maintenance and servicing, £3897 in fuel, just £60 in road tax and around £816 in insurance. (It’s worth noting though that choosing xDrive will increase your overall road tax bill by £270 and your fuel costs by 4.5 per cent).

How you chose to pay for your diesel coupé may affect that decision though. Whilst many will look to finance the entirety of their next BMW so that they own the vehicle at the end of the finance period, not all take this route. PCP finance (where you effectively pay for just a proportion of the car) means you can reduce potential monthly loan outgoings substantially. And more and more BMW buyers are choosing this route. So you can currently finance a new 420d M Sport Coupé for around £399 a month at 4.9 per cent APR over 48 months, with a mileage limit of 8000 miles a year and a deposit of £2500. Buying this car outright would set you back approximately £699 a month over the same period, although you could reduce this significantly if you borrow the money over a longer period.

In comparison a typical Approved Used 640d M Sport on similar PCP finance might set you back £783 a month over three years (with a 15,000-mile limit and a £5000 deposit) or £620 a month if you can afford to put down £10,000. Remember, though, with PCP you don’t own the car unless you choose to pay a large additional balance at the end of the term. And if you plan to buy your BMW outright then check finance rates available from banks and building societies too – these can sometimes be better than those offered by dealerships.

However you choose to pay for a 420d M Sport you can enjoy speccing the car to you own exacting requirements, although those optional extras soon add up. Buy a 640d M Sport, however, and you may have less choice, although there were 102 Approved Used examples available across the UK at the time of writing. And many BMW aftermarket options can be added if needed. But whichever coupé you prefer you’re sure to have a great time behind the wheel. Both make brilliant buys in their own right and show the opposition how it should be done.

An Approved Used 640d M Sport Coupé undeniably possesses more clout, and the fact that it could be owned for a similar overall outlay makes it even more alluring. However, we’d say that on this occasion the new assertive-looking 420d M Sport Coupé – with its finer handling and steering responses – just shades this contest. We wouldn’t blame you if you decided the extra £35 a month is justified for the 640d, though…

THANKS TO: Many thanks to all at Wollaston BMW Northampton (www.wollastonbmw.co.uk) for their kind assistance with this feature.

Both coupé contenders are as thrifty as they are nifty There’s plenty to like about the 640d: superb engine, plush cockpit, fantastic looks and a pretty practical boot, too. The 420d’s cabin is lovely, but not quite up to 6 Series standards, and while the four-cylinder 2.0-litre engine is good… it’s no match for the 640d’s mighty 3.0-litre ’six. The 420d might be the 640d’s little brother but it’s still a hugely stylish piece of kit and looks particularly stunning in M Sport guise with Estoril blue paintwork.

Alvis Stalwart and BMW 635CSi E24 also in my garage