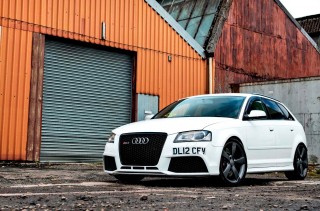 It all started with a Ford Mark 2 Escort. Then another, then another. Clambering through his teenage years and into his early twenties, Kevin Baird knew what he liked – and he liked those motors modded. A 1.3 Ghia spurred his descent into a lifetime of fast driving and committed tuning, taking over from a hand-me-down Mini 1275GT, but it wasn’t long before he levelled up and took to the upper echelons of the Dagenham saloon range. We’re talking about the Mexico, the 1600 Sport and the RS2000, each of them dropped down low and shouting out of a Janspeed exhaust. Noisy, sideways and endlessly tunable, what better introduction could there be to performance motoring? But therein lay the rub. In a world which had recently embraced the merits of the mechanical snail, natural aspiration would never be more than a tasty, torque-light entrée. The time had come to live life turbocharged. A Fiat Uno Turbo soon landed in Kevin’s possession, followed by an ultra-eighties MG Metro Turbo, complete with strutting side graphics and red seatbelts. The forced induction dreamboats kept on coming, Kev eventually landing in a Subaru Impreza STi. 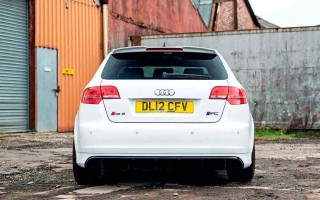 A 2008 hatchback, the 2.5 litre GH is oft derided by ill-informed forumites but Kevin was in love with the seven starred five door and the way it blended speed with effortless practicality. As the years wore by, the Japanese machine just got faster and faster, culminating in a 440bhp build. That went bang, as tweaked engines sometimes will, and a more conservative 400bhp motor saw out several miles of happy ownership.

Kev really was content. He’d had no plans to part with the car and, were it not for the words of an offshore oil colleague, he might still be a Scoobie man today. ‘My mate on the rigs had just got an RS3,’ he remembers, ‘and he was talking about just how good a car it was.’ With four-wheel drive, a commodious cabin and a turbocharged motor that responds well to a power addict’s greedy touch, the Audi had everything the STi owner values in an automobile. When he returned to land, he just had to take a test drive.

Early impressions were a little conflicted. Perched behind the wheel of a tuned example with a Stage 2 MTM build and the optional Audi bucket seats, Kevin just couldn’t get comfortable. ‘Not many people say it but I just didn’t like the buckets,’ he reflects, ‘but the smoothness of the model really stood out. It was the first automatic transmission I’d ever tried and I was totally blown away.’ Recognising the model’s merits, he soon tracked down a nearly new and entirely standard example in Kirkintilloch. One trade in later, it was his. 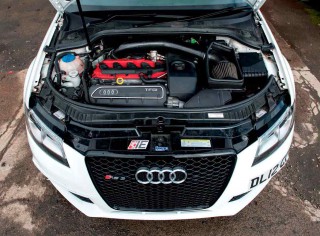 Coming from a storied background of tuned hatches and fast saloons, it wasn’t long before the itch rose up in the new RS3 owner. It was time to get tuning, just two months Kev had first called the 8P his own. ‘You can get quite a good power boost with just a map and an exhaust on these cars,’ he explains, ‘and that attracted me straight away.’ Working with Ecotune in Glasgow, Kevin swapped out the back box, disappeared the two intermediate cats and submitted his Audi for an APR Stage 1 remap.

Out on the road, the gains were immediately apparent. ‘It felt like a totally new car,’ Kev smiles, ‘it was just so much sharper than before.’ Pushing out 404bhp and over 516lb-ft of torque, we’re not surprised. Big rewards carry big risks with them and, but a few thousand miles later, the RS3 was felled by the tough end of the tuning game: an injector failed; the bores washed; one of the pistons smashed itself to pieces. Game over.

An optimist in the face of unfriendly odds, Kevin refused to give up. The engine block was whipped out of the Audi and shipped to a specialist engine builder, with instructions to bore out the cylinders. The plan was simple: by swelling all five pots, the RS3 owner hoped to smooth away the bore damage while increasing displacement to 2.7 litres. If it all worked out, a set of oversized pistons would have capped of the build and pushed power to higher peaks than ever before. There’s just one snag: we’re using the conditional tense because a) that didn’t happen and b) the Audi’s original block was completely junked. 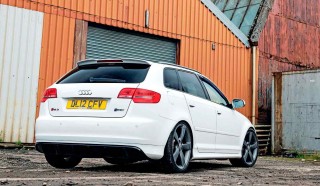 Two paths forward emerged, both wildly divergent from the other. The RS3, denuded of its pulsing five pot, could be punted on to whichever optimist had the funds to ix it or Kev could source a new motor and keep on going. He chose option two and ordered a fresh block direct from Audi. Before the motor was locked in place, Dave and Ross at DH Automotive gave it the full Stage 3 treatment, fitting everything from Mahle pistons and forged conrods to a full titanium valvetrain and aggressive Schrick camshafts. A TTE500 turbocharger and a water methanol injection kit completed the build.

The result passed straight through quick and landed in psychotic. Power peaked at 540bhp, torque crested 546lb-ft and 60mph arrived in barely 2.85 seconds. ‘It was really fierce with the meth,’ Kev grins, ‘and it revved all the way up to 9000rpm. It was so, so fast!’ The brightest stars burn the briefest time and, before long, the new engine had also reduced itself to scrap. This time, the water meth system was to blame: it failed without a single warning sign, causing engine bay temperatures to skyrocket. Kevin was oblivious, right up until the moment when a valve cooked and detonated itself. The resultant shards smashed through the turbocharger, before ripping a hole through the engine. ‘Hey,’ Kev sighs, ‘if you’re going to kill an engine, at least do a thorough job of it…’ 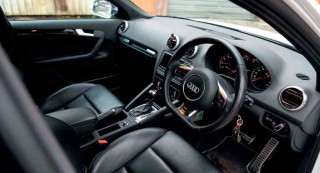 Shorn of its second engine, the RS3 was once again in need of a motor and the inexorable passage of time had only made things more difficult. Looking over an online market which had long since taken the current-gen 8V model to heart, Kevin struggled to find an 8P-era five pot for his first-gen hyper hatch. DH Automotive were quick to offer another solution. ‘Dave advised me to look at an 8V engine,’ Kev explains, ‘he reckoned it would be more suitable for the task and he was right. If I had a chance to do the whole build again, I’d skip the forged motor completely and go straight to the current one.’

The Scottish Audi specialist made short work of the conversion. Starting with a lightly used engine, Dave and Ross stripped back all of the 8V sensors and replaced them with earlier units from the 8P, the only sure way to make the late model motor work with the older car. Before the car could hit the road, it was time to decide on the engine’s final spec and Kev was feeling cautious. After two spectacular self destructions, we can kinda see why…

Keen to exploit the latent capability of the 8V’s inline five, Kevin and the DH team focused their energy on supporting mods. That means an 034 Motorsport air intake system, a Milltek downpipe and 3.5 inch exhaust system with the centre cats deleted and a modified fuel pump with Autotech internals. Add a nine-blade TTE500 turbocharger, secured with a generous trade in for the second motor’s trashed turbine, and you’ve got a formidable build without disturbing any of the engine internals. An MRC remap finishes the job, pushing power to 520bhp and torque to 538lbft, while the Banbury firm has also tweaked the TCU to increase torque tolerance. 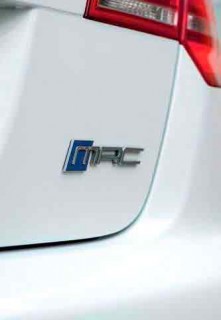 Elsewhere, the RS3 has benefited from a similarly restrained touch. The bodywork is untouched; the interior has seen nothing more than a P3 Gauges vent-mounted auxiliary gauge, allowing Kev to tweak torque levels on the move; the 19 inch Rotor alloys remain, though they have been powdercoated in a deep grey to create a sharp aesthetic contrast. They’re matched by Bilstein B16 coilovers: the springs drop the ride height by 25mm at the front and 20mm at rear, all while keeping the turning tight. ‘It sticks to the road now,’ he smiles, ‘the Bilsteins can be a bit harsh on really poor tarmac but it’s worth it: I can completely trust them in the corners.’

They’re not the only handling enhancement. Way back in the Stage 1 days, the RS3 was fitted with 034Motorsport anti-roll bars and Kev is still singing their praises today. ‘They’ve got a real wow factor,’ he says, ‘they’re like night and day compared to standard and they totally transformed the back end.’ The most recent modification, a full Powerflex dogbone insert, has been every bit as powerful. Fitted to fix some knocking issues, the pint-size piece has also worked to substantially tighten the car’s responses.

Five years after he first welcomed 8P aggression into his life, Kev has no plans to kick his four ringed habit. ‘I’ve no plans of trading it in or selling,’ he says, ‘none at all. I’ve invested too much in it, I love it so, so much and I just can’t see myself driving anything else.’ Used a daily driver whenever its owner is back on the Scottish mainland, the RS3 continues to impress with its wide-ranging skillset. ‘We can jump in, fill the boot, put the back seats down and its practical but, when I really push it, it still puts a smile on my face.’ Decades after Kev kicked nat-asp down the garden path, his 520 brake runabout is proof that – with a little owner loyalty – a tuned-up turbo is the place to be.

THANKS TO… DH Automotive for all the engine work and rebuilding her many times and MRC Banbury for tuning. 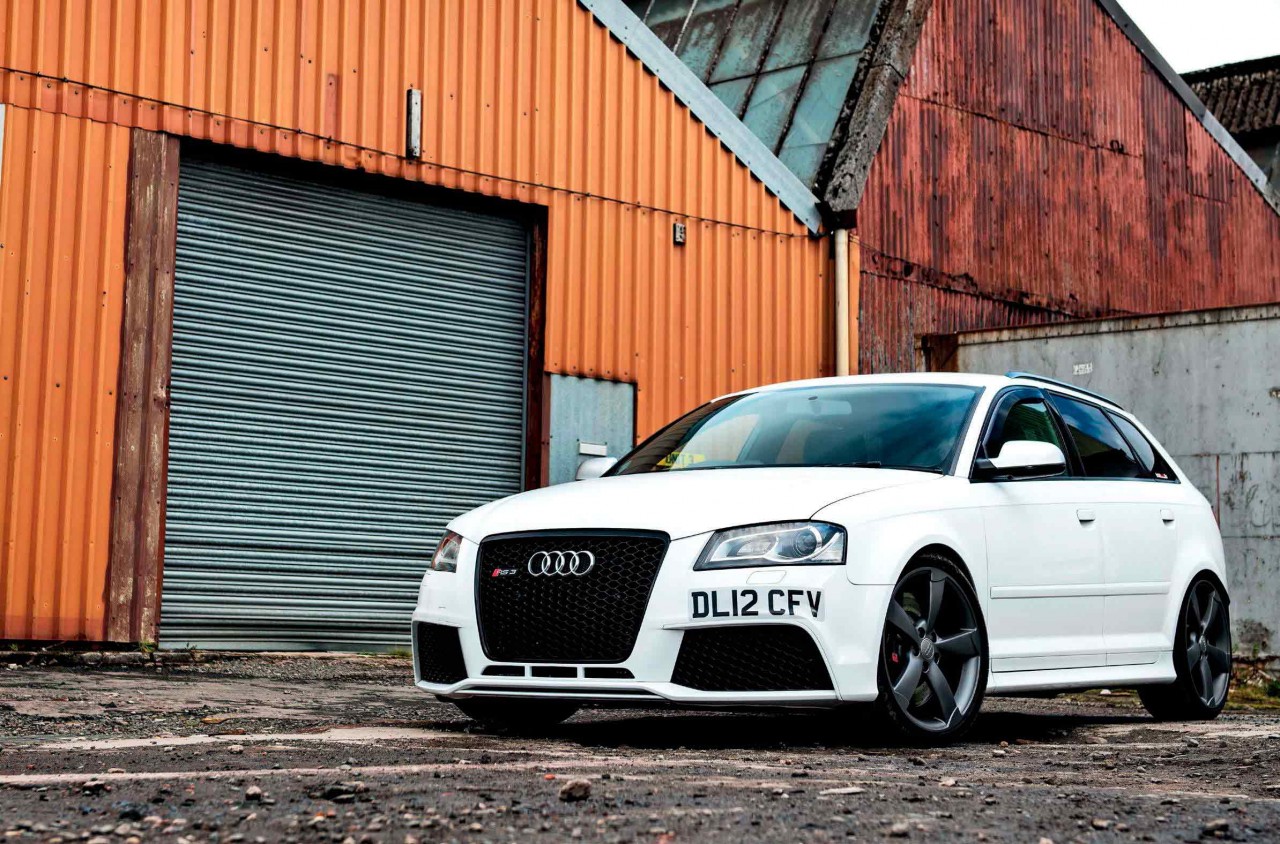 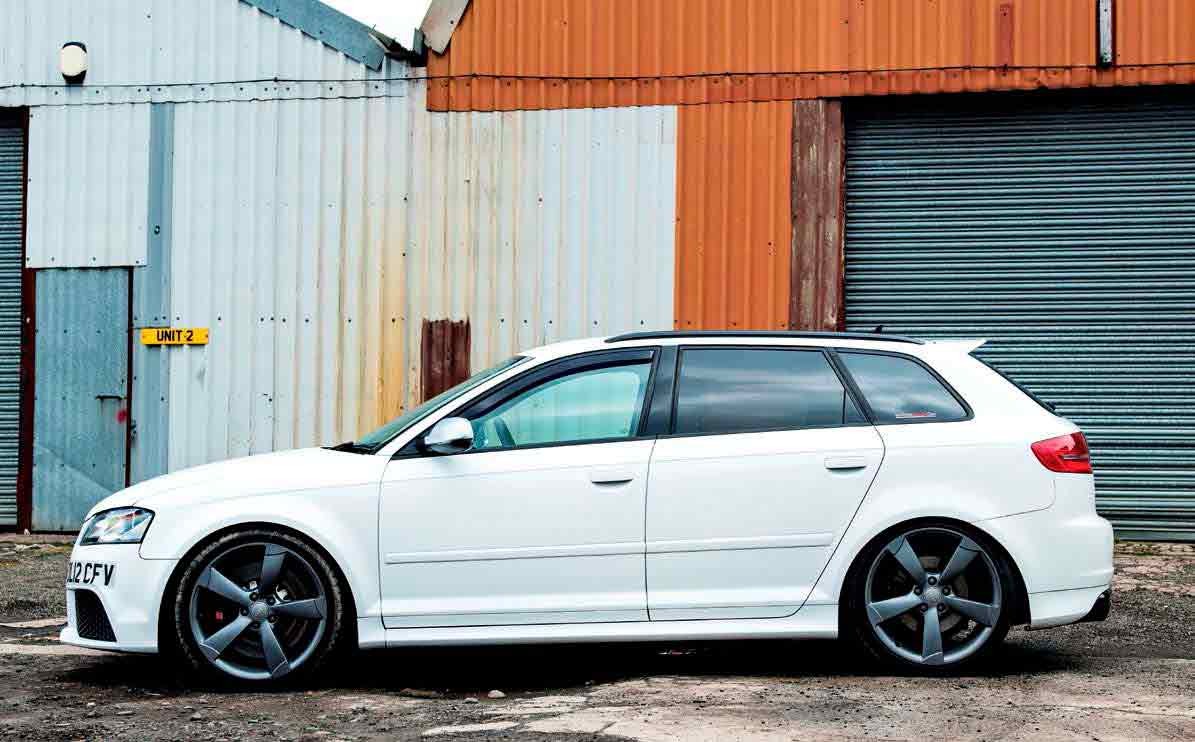 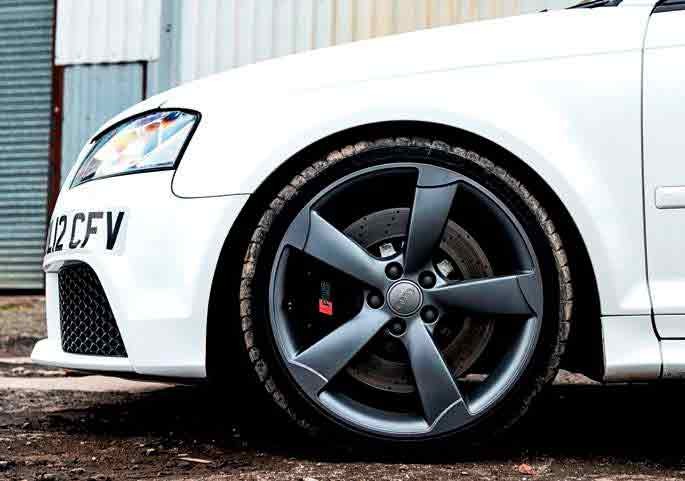 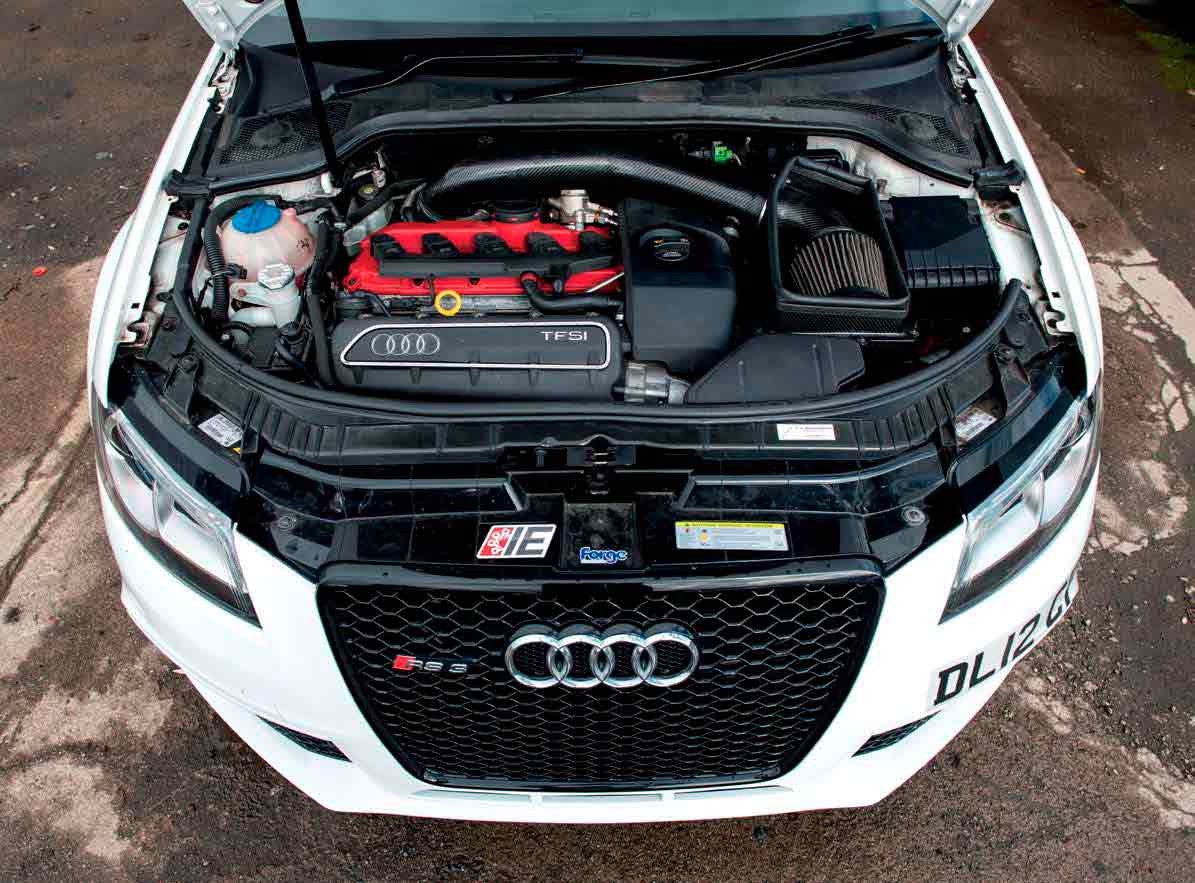 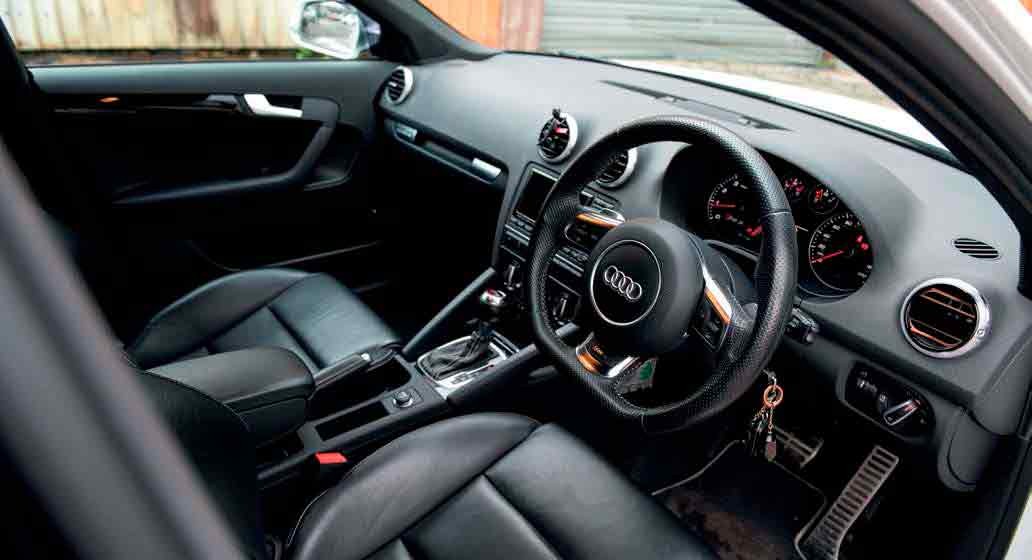 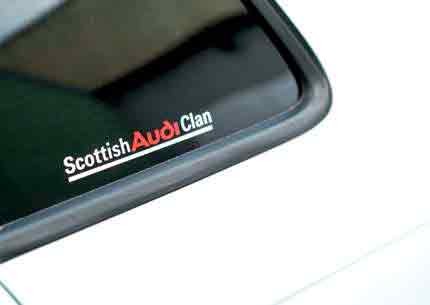 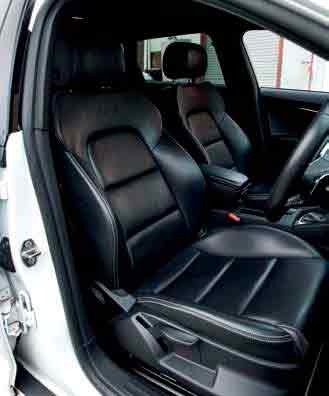 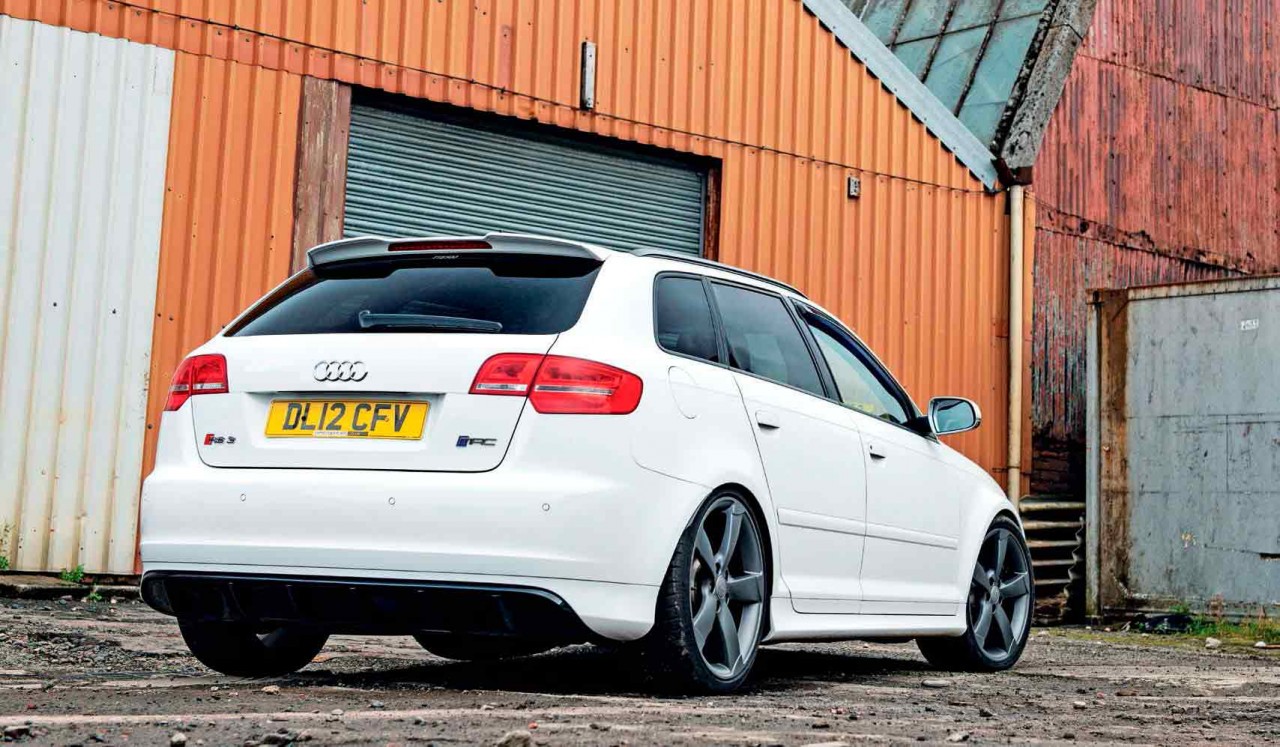 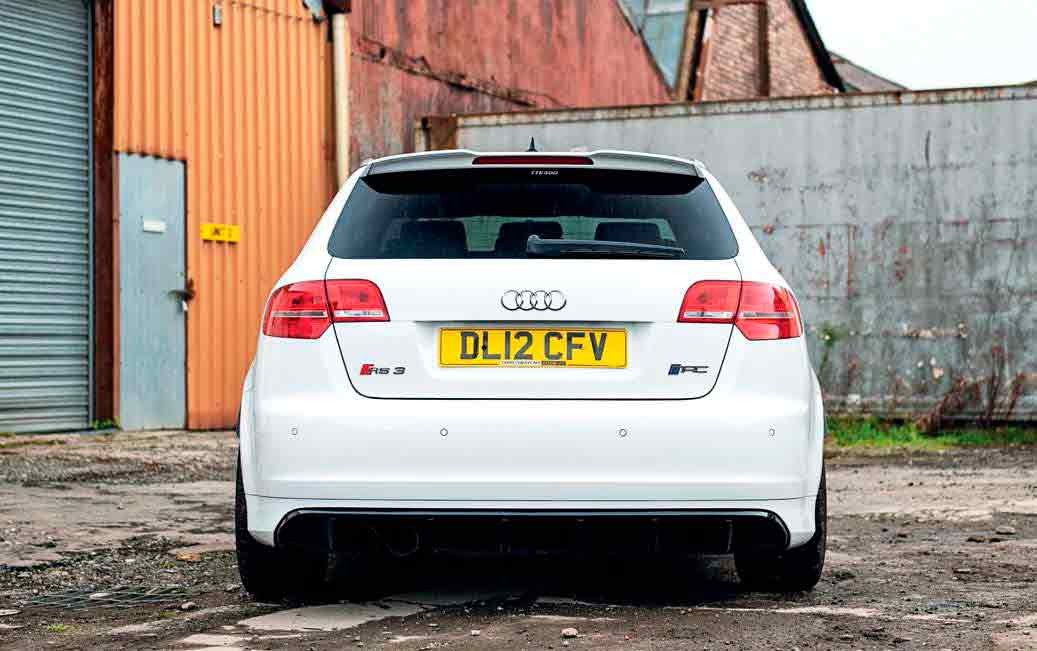 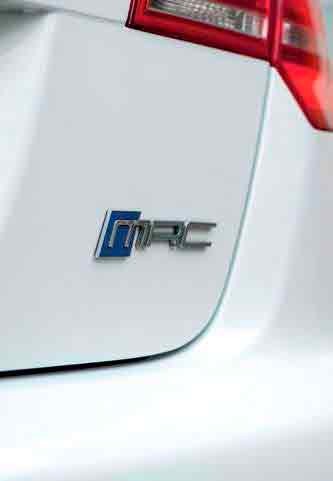 “When I really push it, it still puts a smile on my face”

Are you a member of any club? Scottish Audi Clan