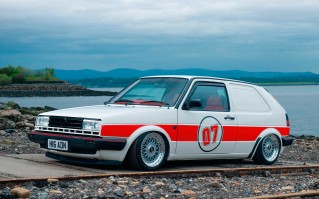 When Gordon Higgins got chatting with William Skelton of Dubnutz about creating something trick for his Volkswagen Golf Mk2 project the two ended up hatching quite the plan! Words: Si McNally. Photos: Ade Brannen.

It’s difficult to do something different nowadays, especially in the Volkswagen scene. Pulling something off that no one has seen before is nigh on impossible, but there’s something almost refreshing about simplicity, and actually doing what you want to do, rather than following the crowds and chasing the latest trends. It must be even worse when you’ve been involved in the scene for more than 30 years, and have witnessed looks come and go, and the growth of what was a tightly linked group of friends and contacts, reachable only at the odd meet or by landline, to the global phenomenon that our world has become, thanks to the world-wide-web.

William had made sure the engine bay was as smooth as a toddler’s posterior, and fashioned one of his famous looms to run through the chassis leg 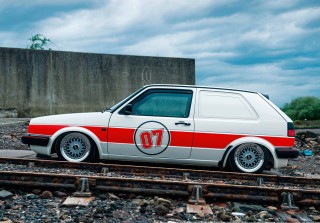 Gordon Higgins cut his teeth on Beetles and other air-cooled goodies, back when most of us (sorry Elliott) were nothing but a twinkle across a dance floor in our parents’ eyes. So he’s been there through it all.

50-year-old sign maker Gordon has, like so many of us, fallen foul of the Mk2 curse. Once you’ve had one, it’s seemingly impossible to not have one in your life. This particular example has been his for more than seven years now, though it was on the scene (in a different guise) for a few years before that in the hands of Ritchie Cauldwell.

It didn’t start life as a van though. Those panels were removed from its ultra-rare panel-sided sibling more than 10-years ago now, when Gordon picked one up for a song as a fixer-upper. After further investigation, like so many 80s commercials, it was as rotten as could be after a life of Russian gulag-esque hard labour.

With the van panels being as rare as an unsullied-university- student, and Gordon knowing he would build a van at some point in his future, they were whipped straight off and tucked away, before the shell went off to the big car park in the sky. But before all this, once he’d pried the keys from friend Ritchie’s hands, the car you see here was a humble, though nicely modified and low mileage, 1.8 Driver. Gordon ran it as-was for five-years or so, until he came across Willie Skelton from Dubnutz. You’ll recognise that name from the first feature in this issue, where you can read all about his very lovely but very potent 3.2 Mk2.

After what was probably quite an animated conversation, the two hatched a plan to build the Mk2 Gordon had always dreamt of. A no holes barred, full on build, with no stone left unturned. Obviously, those treasured van-panels were going to need to come out to play, too.

It wasn’t long before the car found its way to William’s workshop, where it was quickly stripped and assessed, to check that it was ready for what was to come. Luckily, it was spot on, and required very little fettling before it was ready for body work. Willie made sure all of the original trim holes were welded and filled, and worked hard to retain each and every one of the original panels, which was really important to Gordon. Once completed, the shell was sent to Lothian Car Care for a complete bare metal respray in its original hue. Stewart there is notorious for his skills with a spray gun, so it was a bit of a no brainer when it came to where to send it, and the job he’s achieved on the Mk2 is flawless.

Once painted, it was back to Dubnutz for reassembly. Through this time, Gordon had been hunting high and low and sourcing the bits he wanted for his ultimate Mk2. That Rallye front end, including lights, grille and slam panel, rare in its own right, is a brand-new unit. Even damaged ones sit in the highest scene tax band, so you can only imagine how much Gordon had to hand over once he found one of the holy grails of Mk2 modifications. Not only that, but he also managed to find himself a set of brand-spanking new small-bumpers, CL spats and that discreet front splitter. All of this meant that the shell, sitting resplendent in its new coat of Alpine White, literally looked like a brand-new car. Well, van, as it now wore its solid-side-panels with pride, along with every single seal being replaced. If you’re going to do something, then you might as well do it right…

The finishing touch on the outside was that also mega-rare Votex spoiler. Does something tell you that Gordon likes his ultra rare bits? We’re certainly getting that vibe.

Next on the not-inconsiderable job list was the powerplant. With Gordon having seen (and driven) Dubnutz demo Mk2, with its fettled 3.2 torque-machine powering it nicely, he knew exactly what route he wanted to go down. The spec is exactly the same as William’s, with a TT giving up its BHE heart for the commercial-racer.

One Ramair filter, 2.5” custom exhaust and Dubnutz downpipe later and the engine was in. Before it went to paint, William had made sure the engine bay was as smooth as a toddler’s posterior, and fashioned one of his famous looms to run through the chassis leg. With the gearbox and block painted red, along with hardware and brackets finished in white, it’s certainly a handsome thing.

With William’s Sahara gold (beige) sat on coilovers, Gordon decided to go a different route with the suspension on this one, and wanted it to sit as low as it could, so air-ride was the way to go. As you can tell, Gordon wasn’t cutting corners and scrimping on this build, so Air Lift 3P management was employed to ensure the Mk2 sat how Gordon wanted it.

A set of Black Series fully adjustable custom struts by Intermotiv, teamed up with a pair of 440cc compressors and 3/8” lines make sure the bouncy bits are taken care of. The tank and install are tucked away under the rear floor. That very, very red rear floor.

You can’t really miss the interior. Subtle is not a word we would use to describe it. But it looks incredible, and is finished to the highest level, as you’d expect from Gordon and William. First up, those Recaros, door cards and the dash were sent over to Glasgow-based Optimus Trim for them to work their magic. Finished in finest nappa leather and alcantara, they follow the theme of the car, and are absolutely flawless. With that (again) ultra-rare four-spoke BBS wheel trimmed to match, alongside the seat-belts, it’s a hell of a place to be, and something you definitely need to check out if you get the opportunity to see Gordon’s pride and joy in the flesh.

With the car now almost together, it was time for the road-touchy and stoppy bits to come together. With a simple-yet-efficient brake setup fitted to William’s gold beastie, it was decided to go the same route on Gordon’s. So a set of Ibiza Cupra brakes found their way on all round, in the form of 280mm fronts and 256mm rears. With M-Tec cross-drilled discs and EBC Red Stuff pads front and rear, along with HEL braided lines all around, there certainly aren’t any issues with bringing the car to a stop when its driven in anger. Which it is. Regularly. A set of Super Pro polybushes all-round finished the chassis off, but then it was time for the finishing touch.

Gordon’s Mk2 has worn a few sets of wheels in its time, but its current set are without a doubt his favourite. There’s something striking about a set of BBSs on Mk2s, whether they’re RSs, or, in this case, the slightly simpler RMs. They’ve been worn by countless cars over the years, and will continue to until the end of time most likely, but that’s because they work so well. Gordon’s is wearing a set of 7.5x15” and 8s, with genuine Radinox lips, bolts and badges. Again, simplicity and class works wonders.

We’re a big fan of cars like Gordon’s. They go to show that a small number of well thought out and properly executed mods can go a very, very long way indeed!

The 3.2-litre 24v V6 may fit the Mk2's bay similar to the trusty old 12v VR6 but it's quite a different animal in terms of performance.

SHOUT: Willie at Dubnutz for building it for me, Big Stewart at Lothian Body Shop for the great paintwork and Del at Optimus Trim for the interior 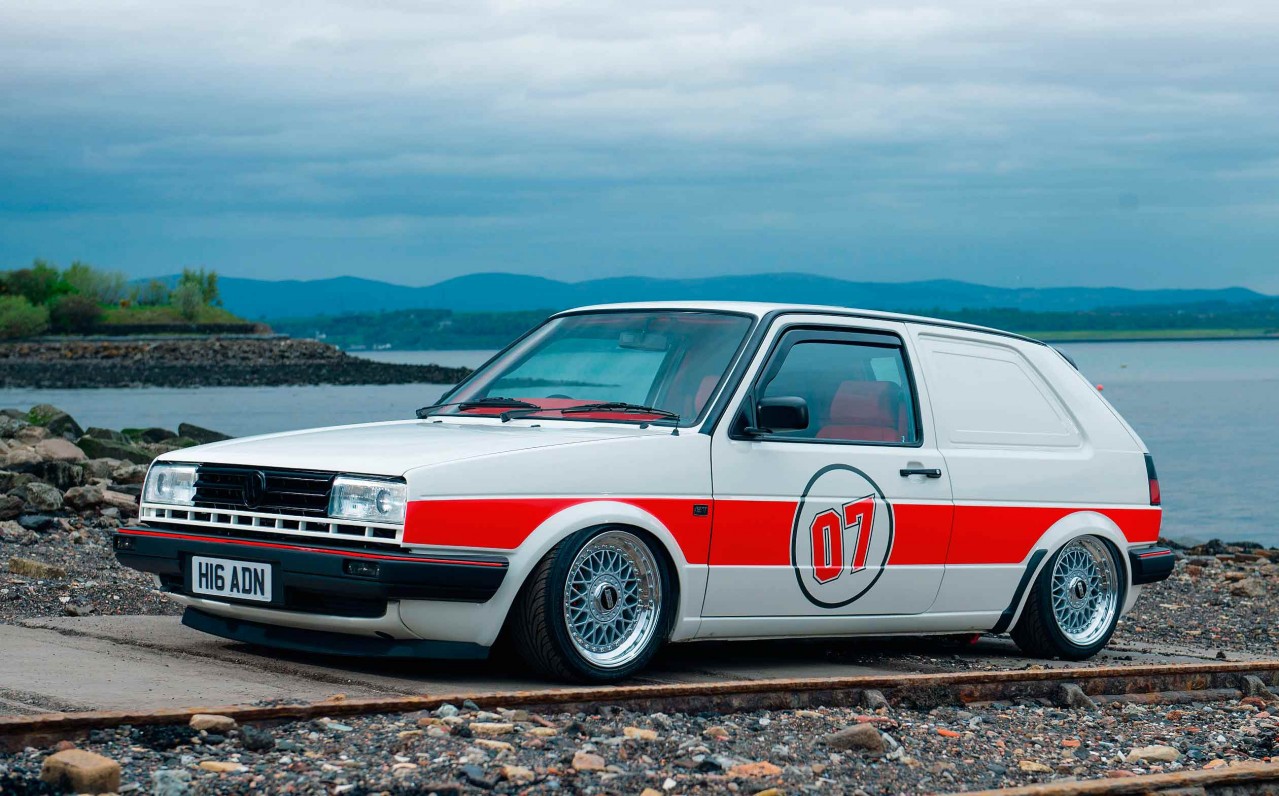 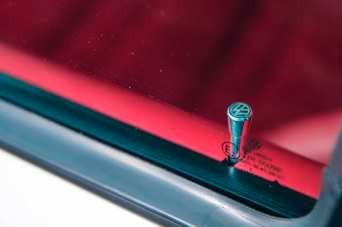 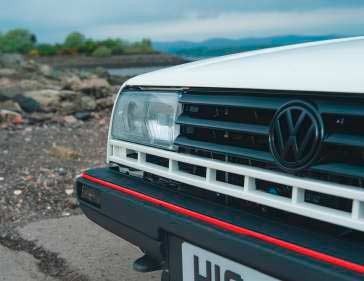 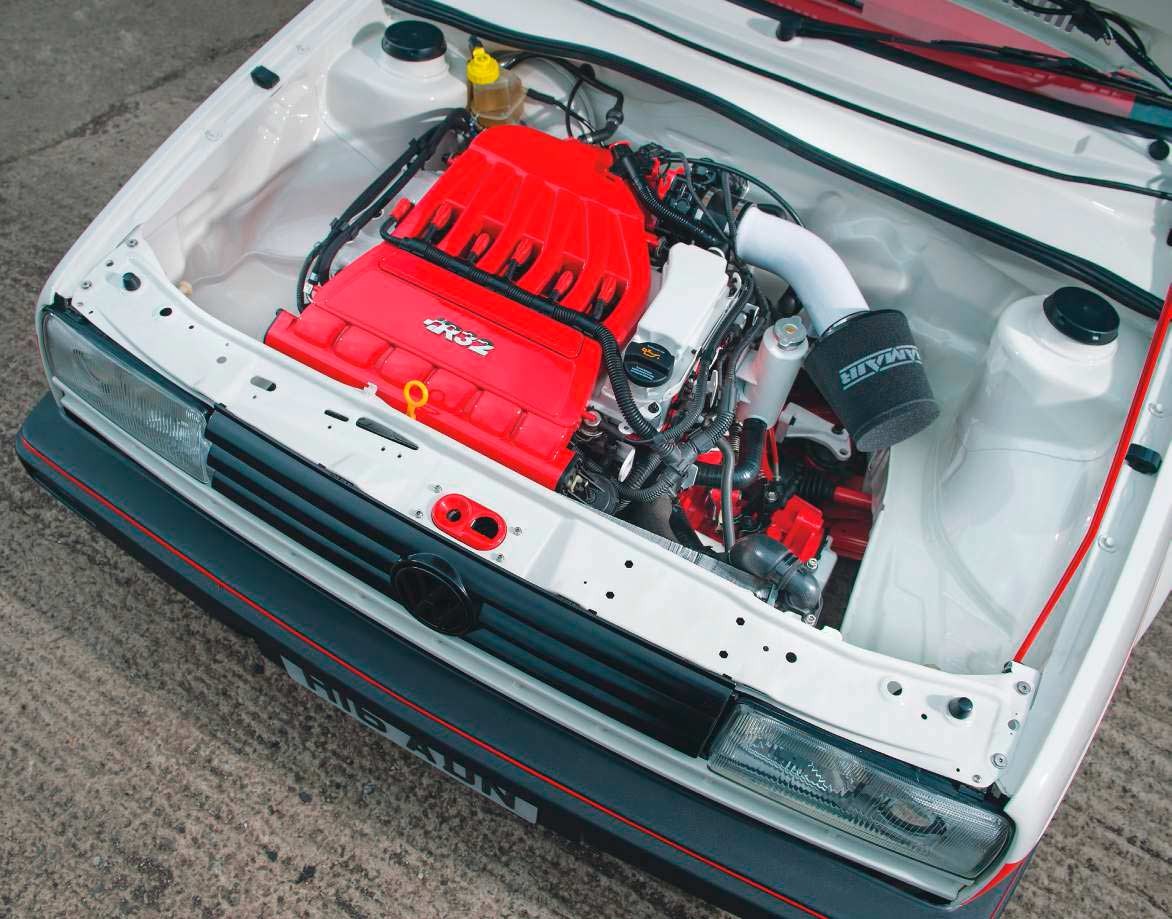 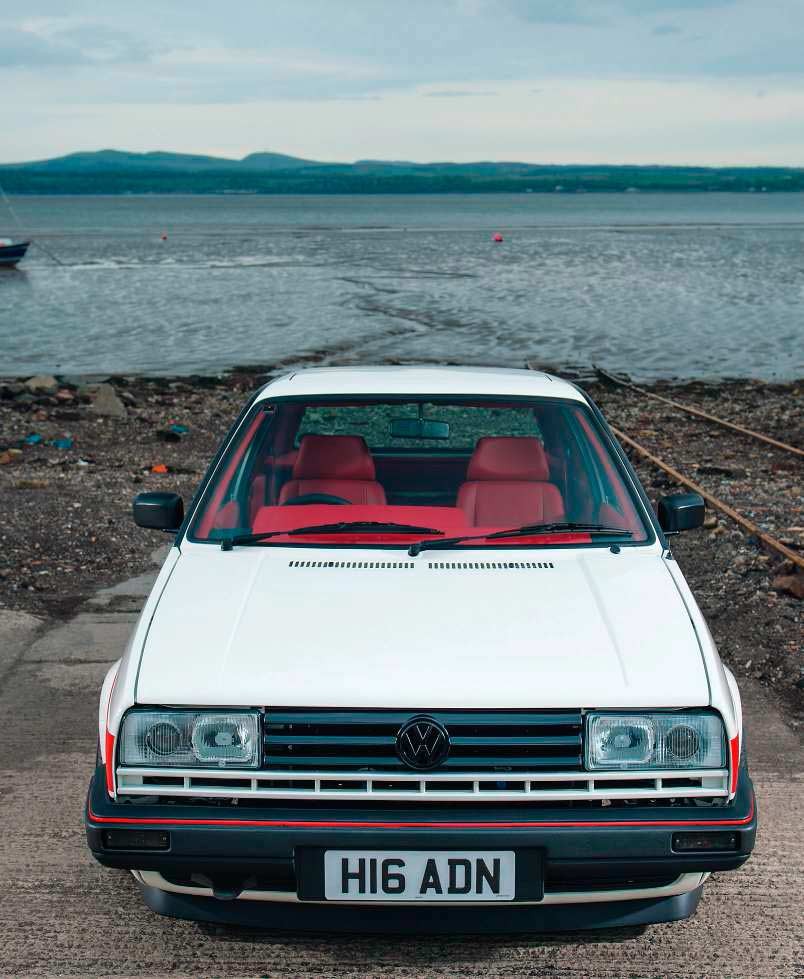 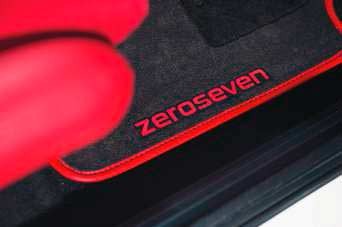 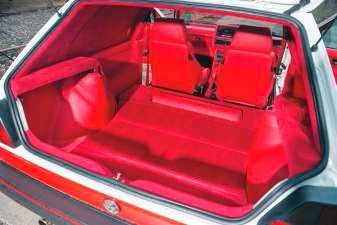 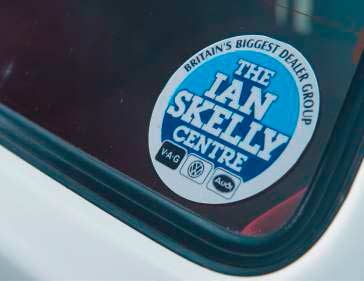 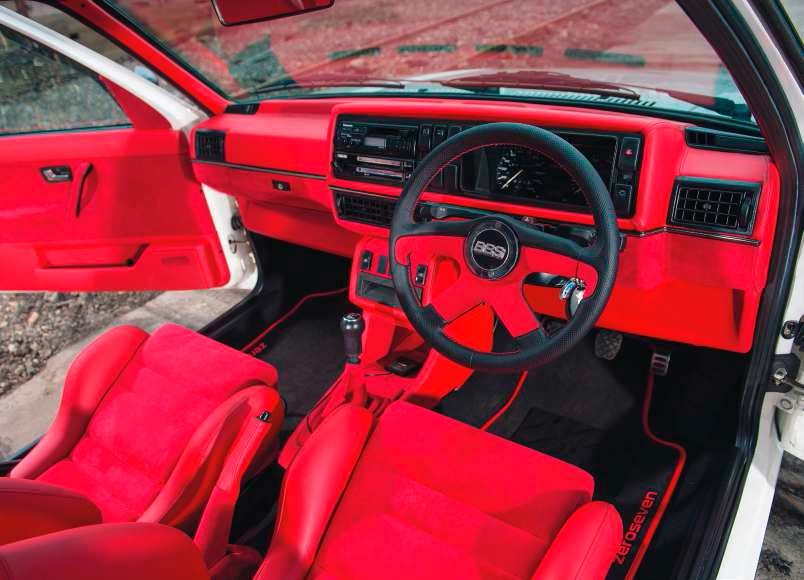 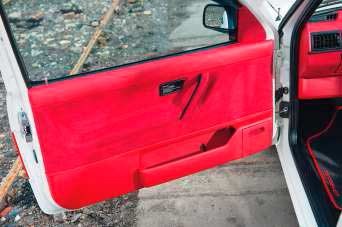 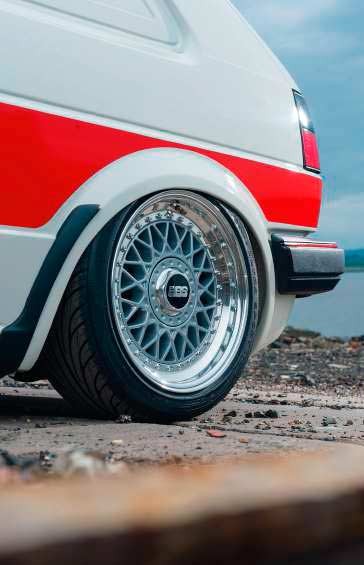 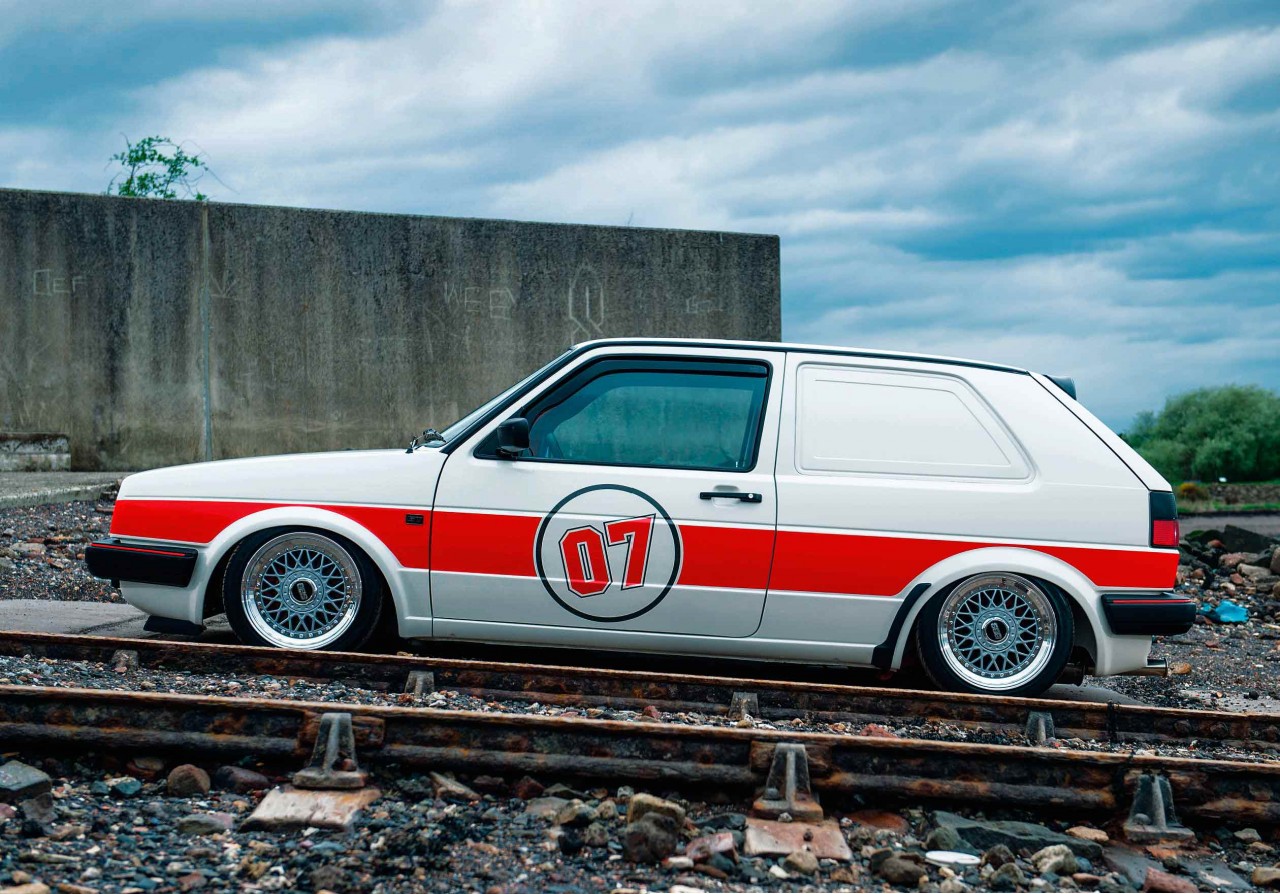 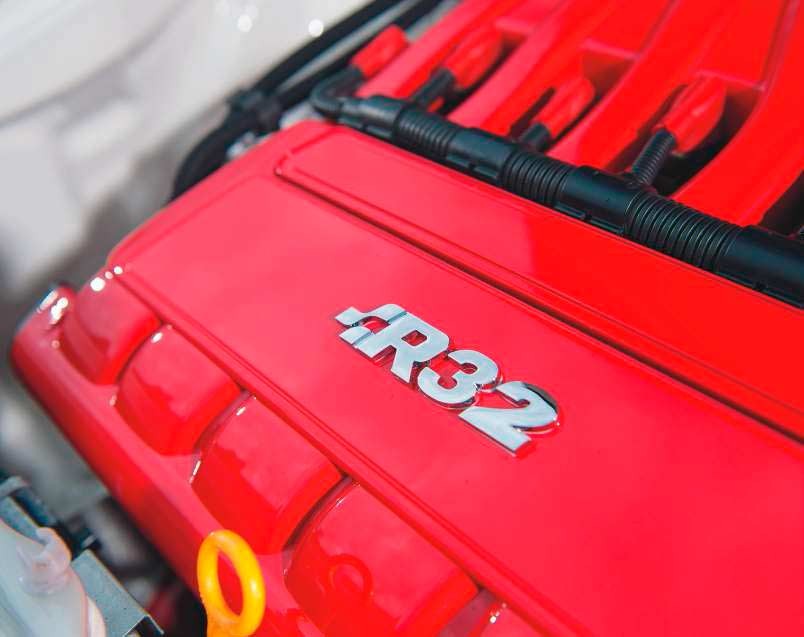 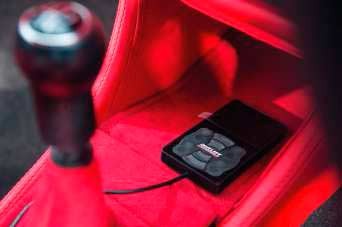 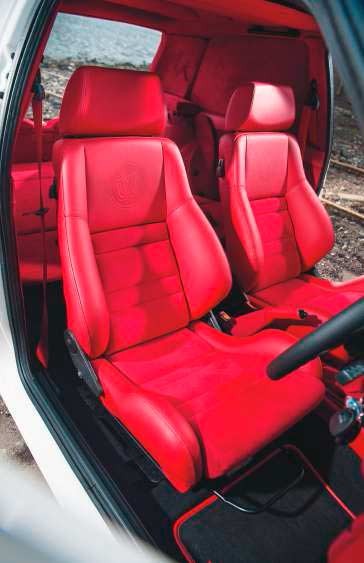 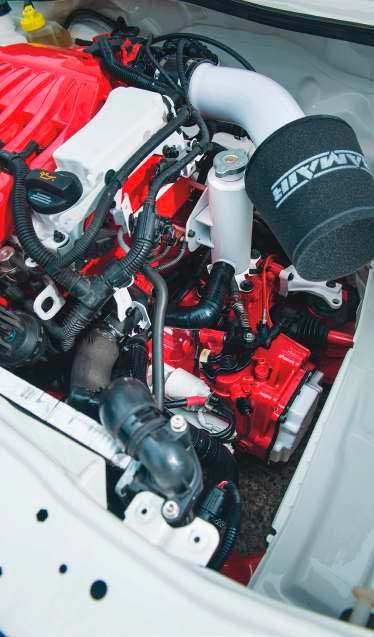 After what was probably quite an animated conversation, the two hatched a plan to build Gordon's dream Mk2