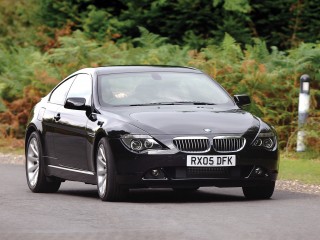 Following on from the original E24 6 Series and then the E31 8 Series, BMW had quite a lot riding on its new E63 6 Series Coupé and the E64 Convertible version, which launched in 2004.

Based on the advanced E60/E61 5 Series platform, the new car was up-to-the-minute in terms of technology, but its styling certainly divided opinion. Like many designs from the Bangle-era, though, this 6 Series has aged pretty well. Aspects that were considered shocking 13 years ago, have matured very positively, with the model becoming increasingly desirable nowadats.

The good news, from the potential buyer’s point of view, is that examples of this generation of 6 Series can now be picked up for between £3,000 and £4,000. But the big question is whether or not they’re worth having? Do they represent a genuine bargain, or a whole host of disasters just waiting to happen?

So, here’s our assessment of this big GT, in the form of practical pointers of which both buyers and owners should be aware.

It’s not a bad engine, and is no less reliable than the previous M62 V8 from the E39. But it is known for using and leaking oil. Really, the 630i is a better bet, but don’t discount a good 645i.

The Valvetronic V8 does like to leak oil – in common with most modern engines – due to the heat it operates at. The 645i is the worst for it at the moment but, as the 650i gets older, its engines are starting to suffer in the same way.

BMW designed the V8 in such a way that the alloy coolant cross tube is sandwiched between the block and the front timing case. This positioning means that a full engine stripdown is required if it ever needs replacing.

The only remotely sane way of fixing this is the extending coolant tube; even main dealers have been known to fit these, as nobody wants to pay for 20 hours of dealer rates to fix an old car nowadays. There is a cheaper way, and that’s fitting a sleeve into the front of the block.

The 6 Series autos all use the ZF GA6HP; overall, a very good unit. The big problem is oil leaking from the finned, plastic sump and, with the undertrays fitted, you can’t see a slow drip. So it’s essential to get the undertrays off to check the situation properly. Any oil dampness means you need a new genuine BMW/ZF sump (nothing else will do), plus plug O-ring seal. Obviously, a level check and top-up will help in the short term.

When the engine is good and warm, let it idle for 30 seconds and blip the throttle. If it pumps out a cloud of blue-grey smoke, then this is the classic indicator of worn valve stem seals. This is an expensive and rather tricky job to sort out.

It’ll require special tools if you’re replacing the seals with the heads still fitted – and you don’t want to be taking the heads off one of these! Reckon on paying a specialist £1,000 to tackle the work for you.

This model arrived for 2005 in the UK and, with 258hp, it goes well, offers noticeably better handling than the V8 and is much more economical, too. Manual versions are rare but worth looking out for.

The N52 is a great engine but, sadly, not without its faults. Failure of the £300 electric water pump is going to become more common. There’s also the potential for very expensive problems caused by with wear in the front cam journals, leading to loss of oil pressure to the Vanos units. Beware an illuminated engine management light!

These were popular new due to the tremendous performance and rather better economy than the 645i and 650i, and they are remarkably tough as well. New turbochargers are pricey at around £2,000 for the pair, and cracked exhaust manifolds aren’t unknown.

Beware of remapped cars, and you should pay to get the swirl flaps removed as well as cleaning out the EGR valve (be wary of EGR deletes). Also, consider replacing the vacuum hoses and fitting a new breather unit.

All are good, tough units with no real weaknesses, and a clutch kit is only £260 for a proper LuK three-piece kit. However, a rattly dual-mass flywheel, at £650, is a good deal less rosy. For the V8, a new flywheel is well over 800 quid.

The 6 Series proved better in this respect than the E65/E66 7 Series did on arrival and, overall, they’re pretty good. As ever with these modern BMWs, a correct battery in perfect condition and coded to the car is vital. If you do DIY, you’ll need a decent INPA or similar diagnostics programme on your laptop (or Carly on your iPhone), to hunt down faults. Many control units and components are shared with the E60, which is just as well because used parts are rare.

Having alloy doors certainly saved some weight, but you may find alloy corrosion in places such as where the top trim strips clip on. Sport versions are more sought after of course, and avoid the SMG version of the 645i as this can be lots of trouble with very flaky and expensive new parts availability. A new control unit is over £4,000, for example, and there’s next to no chance of finding a used one.