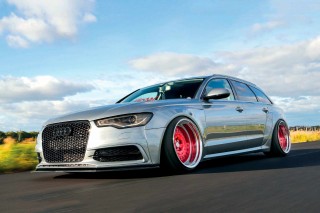 Family. That innocent and unassuming little word represents so much to so many, in an infinite number of ways. Fans of EastEnders will see it as a word with a lot of vowels, ‘faaaaaaamily,’ that means giving your cousins an alibi when they’ve done over a bookies or set fire to a pub. Family Fortunes offers a more light-hearted outlook, relying on one another’s ability to recall simple facts about everyday life under the intense pressure of studio lighting. And of course, there’s Sly and the Family Stone, demonstrating that there’s no brotherhood quite like that of dropping psychedelic mischief to a backing track of funky bass licks. You can choose your friends, as the old saying goes, but you can’t choose your family. They’re yours whether you like it or not, so you might as well have a few adventures together. 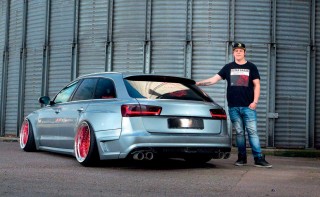 Now, we at Performance Audi have waxed lyrical from time immemorial about how the cars our parents were interested in so often inform those that we drive today. A psychologist might argue that, for many, this represents an impassioned yearning to return to the carefree innocence of youth, buying the car that your mum had when you were a nipper so that you can be, in part, a child once more. But sometimes it’s not that deep; sometimes it’s just an excuse for a bit of good ol’ family bonding. Father and- son teams who rebuild old wrecks they happen across on eBay, girls taking on their grandmas’ bonestock old shopping runabouts and turning them into flame-spitting retro track monsters, we see this happening all over the scene. For Robin Hellgren, owner of this particularly aggressive C7 A6 Avant, the unimpeachable ties of generations bind up the entire project; this is, after all, his sensible family wagon, complete with child seats in the back and a massive boot for road-trippin’ and tip runs. But of course, this isn’t just a story about a man thumbing through Practical Wagon magazine and drawing up some manner of frugality/spaciousness matrix. No, he had to modify it in his own unique style, that’s always been his way. It’s a thread that runs through Robin’s life, way back to when he was a child himself.

“My interest in cars really started when I first saw The Fast and the Furious, when I was just nine years old,” he explains. Early start indeed, flouting BBFC stipulations by a solid half-decade and more, and by the time he was thirteen Robin was already building his first project, a Mk2 Golf which he scythed the rust from and packed out with a meaty audio system. A child prodigy, you might say, and this unstoppable automotive enthusiasm became a key theme throughout his formative years and deep into adulthood.

I just wanted a nice family car, I had no plans to build a project

Fast-forward to his mid-twenties, and Robin found himself with kids of his own. Children, despite being small, take up a surprising amount of space, as they tend to come with all sorts of accessories, paraphernalia and general bric-a-brac. A lot of parents take this as an opportunity to wave a white flag in the general direction of life-enjoyment and buy an SUV. Not Robin though, he did the correct thing and bought an estate car instead. A C7-generation A6 Avant, a well-built and well-equipped solution with a sensible TDI motor and GearTronic transmission. Job jobbed. 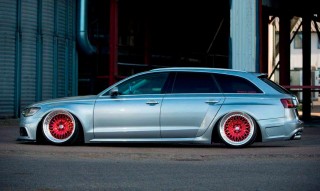 Obviously he couldn’t resist mucking about with it though. The shadow of Brian O’Conner and Dom Toretto walks tall in the affections of many a petrolhead, and they were spurring Robin on from the start.

“I bought the Audi because I just wanted a nice family car, I had no plans to build a stance project,” he grins, fooling precisely no-one. “OK, I wanted some nice rims, and maybe to lower it a bit, but one thing led to another and now it looks like it does!”

The A6 had been found for sale on Facebook, and thanks to its condition and price the car immediately presented itself as the one to have, even though it necessitated a 1,500km each-way trip to bring it home. Perhaps we shouldn’t be surprised to learn that, despite being largely stock, it was already running coilovers and some aftermarket wheels – evidently this proved that the first hurdle had already been vaulted, and more often than not there’s no turning back at this stage. And so the fettling commenced. Some of the body alterations Robin’s carried out are relatively subtle, offering a sort of nerdy spotter’s guide for Audi aficionados; the truly obsessed will note that there’s a pre-facelift S-Line bumper at the front and a post-facelift S-Line bumper at the back. The sideskirts are also pre-facelift S-Line items, and the overall sense of simmering aggression has been ramped up thanks to a subtle tinting of the lights all round, honeycomb front grille upgrades, and a Maxton Design carbon splitter. However, things got rather less subtle while Robin was on the jellybone to Maxton, as he knew they’d created something rather special for the C7 Avant: a bolt-on widebody kit. And it looks pretty bloody spectacular, doesn’t it? The girth and profile of the box-arches call to mind the classic quattro haunches of the 1980s, but amplified and remixed for the 21st century. The front arches add an extra 2.5cm of width apiece, while the rears add 5cm each side, and the effect is remarkable. Robin’s been careful to ensure that their fitment carries his own unique touch too: “They’ve been fitted without visible screws to get a clean look,” he explains. “The widebody kit was the hardest part of the project, as I had to re-cast all the panels to get the fitment just how I wanted it.” 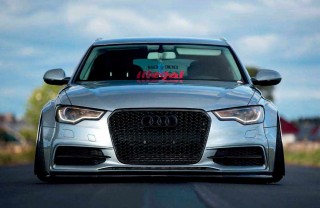 With the look painstakingly achieved, he then handed the car over to a friend, Dennis Käller, to carry out the only part of the build that Robin didn’t do himself: the paint. Keeping in mind the initial impetus to buy the car – i.e. that it was a sensible runabout – he’s stuck to the original shade, having it repainted in its classic Quartz Grey. This creates an amusing dissonant tension between the boisterous bodywork and the sober, subtle colour, a mind masher that’s befuddled exponentially by the frankly outrageous wheel choice. He’s gone for one of our favourite modern designs, the WORK Gran Seeker CCX, in an eye-watering shade of Hyper Red. The dimensions are a brutal 12.5x20” squared, which is just about as far from sensible as you can get for family duties – just look at those rubber-band tyres, they’re 295/25s for goodness’ sake. It’s inspired. And he’s got it all stancing dirty over a full-fat Airforce Suspension air-ride setup, just to refract the silliness into something everyday-usable. It really is little short of heroic.

“I use the car daily throughout the summer, and I’ve been to shows all over Sweden in it too,” he beams. “It’s brought home around seven trophies so far. I also took it to Raceism in Poland two years in a row, which is a 2,500km round-trip. And it gets a lot of positive reactions, people seem to love what I’ve done with it. Sure, there are also people who tell me I’ve ruined the car, but I didn’t build it for them – I built it for me, just the way I wanted it.”

That’s the point really, isn’t it? Your ride, your rules. And Robin really only has a handful of people to please: that little nine-year-old inside himself, bouncing up and down on the sofa as Brian O’Conner’s laptop screams ‘danger to manifold!’ – and, of course, those two smiling faces in the back seat. Because this isn’t just Robin’s car. It’s the family car.

Thanks: “I would like to thank Fredrik and Henrik at Ddesign, Långe-Mikael at L-M-R.Se, and Meguiar’s Sweden for all help and support during the construction phase.” 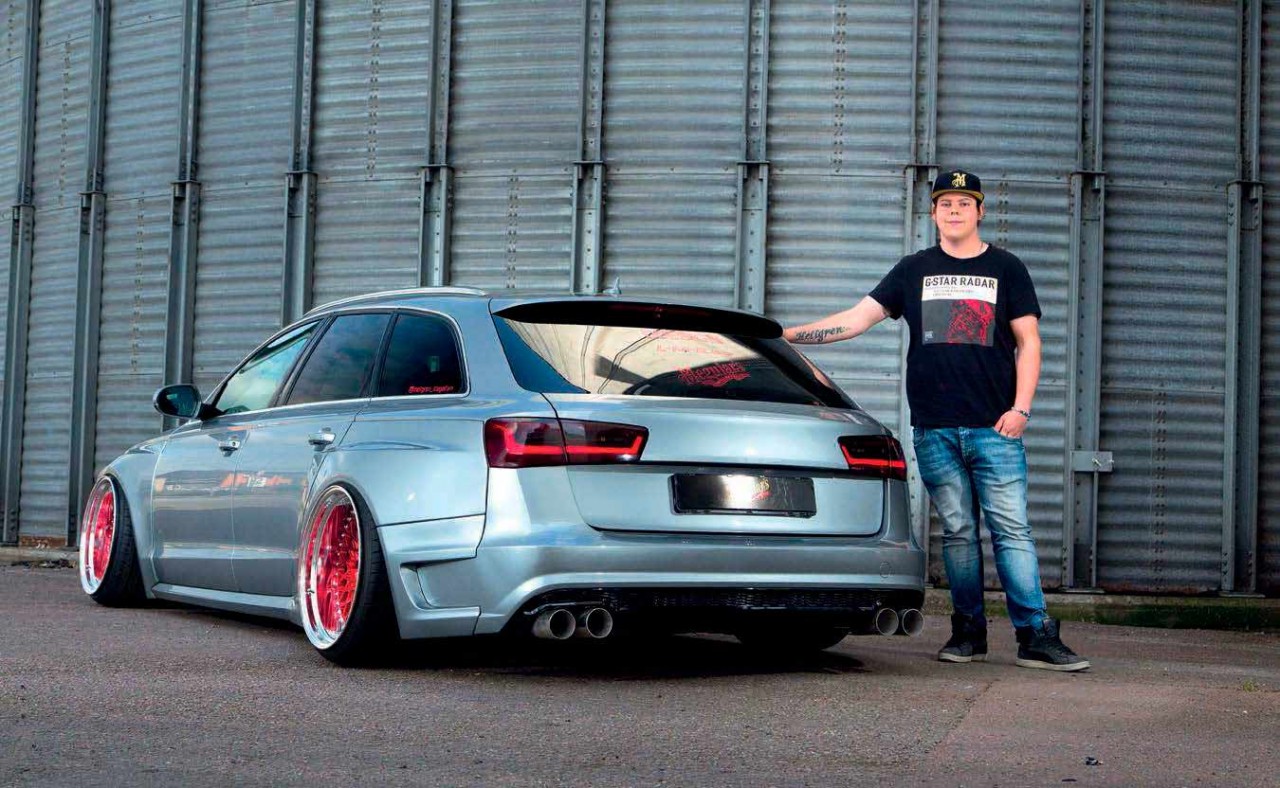 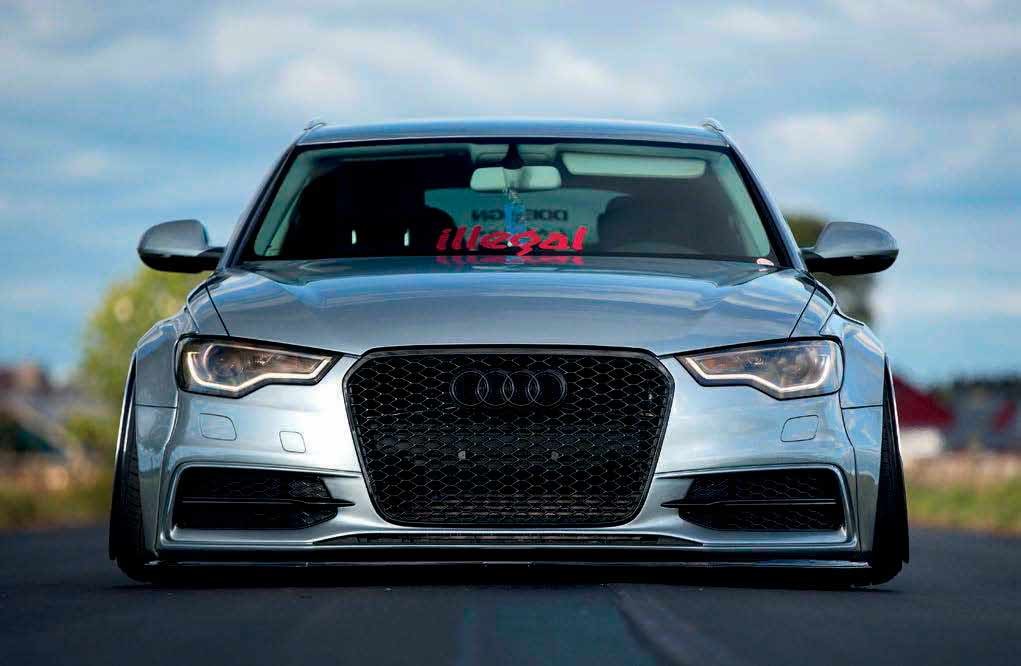 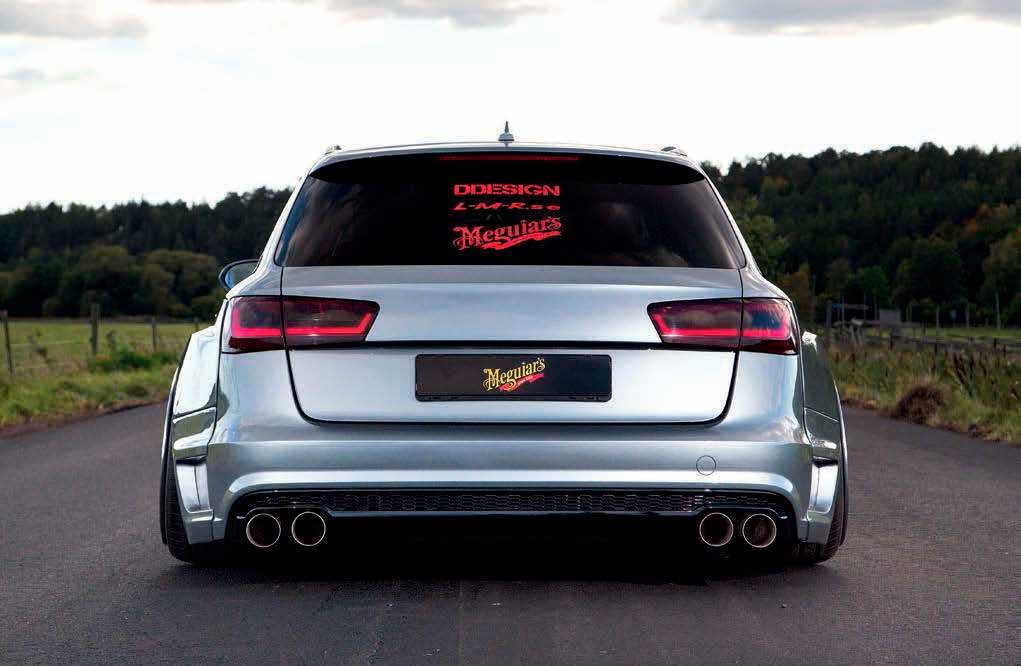 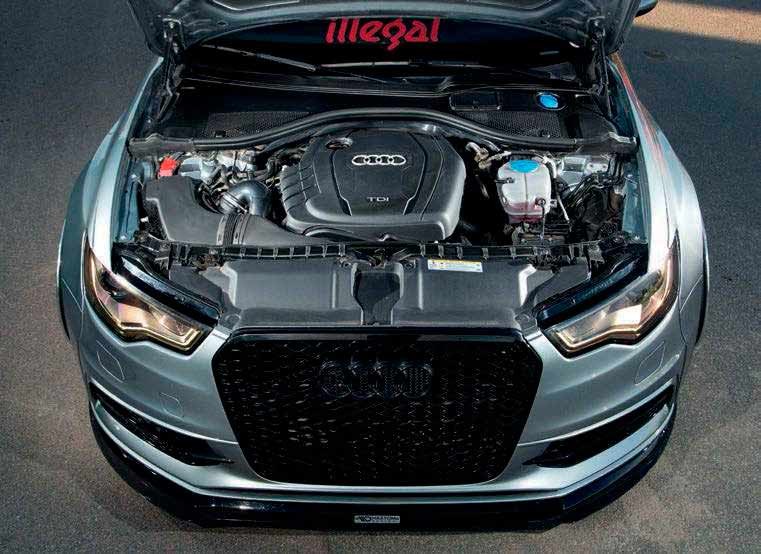 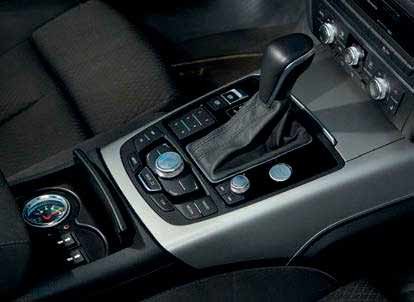 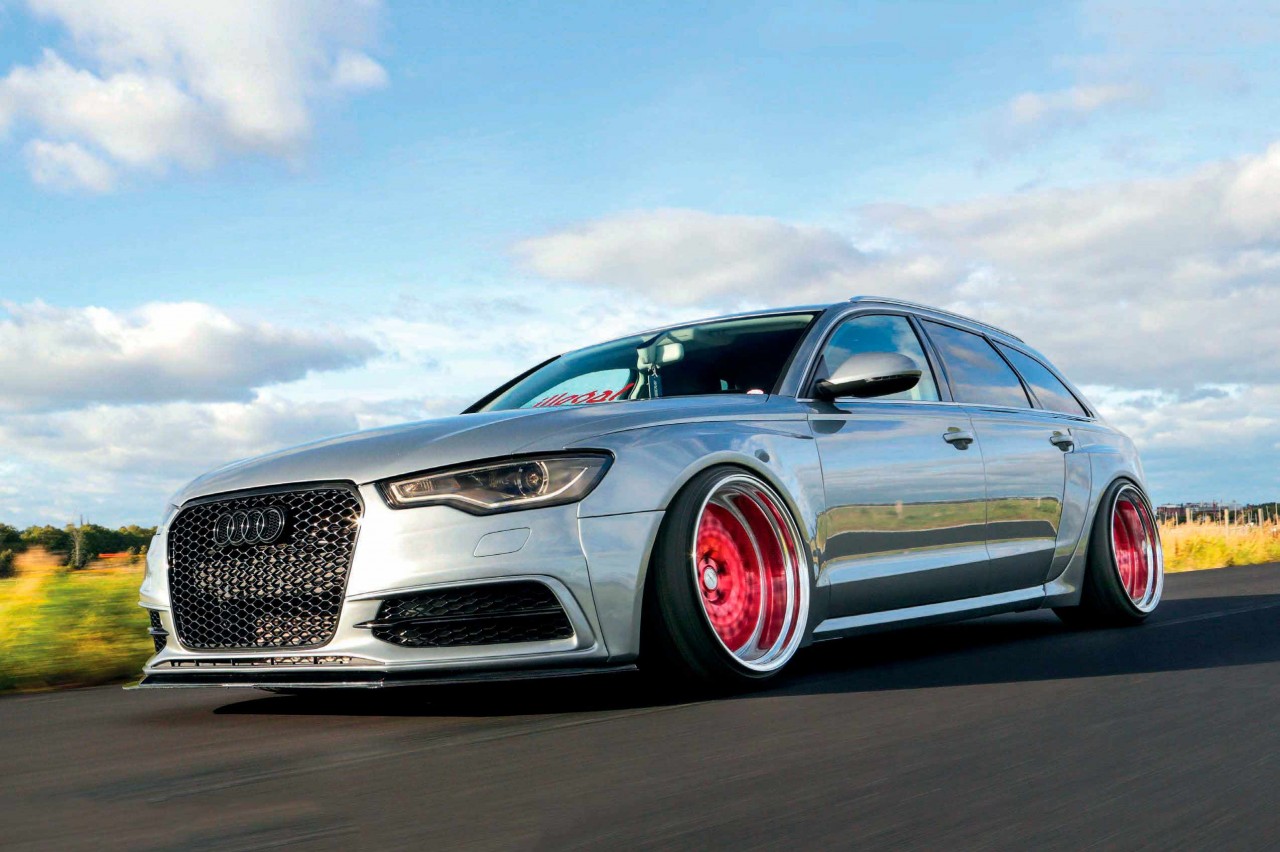 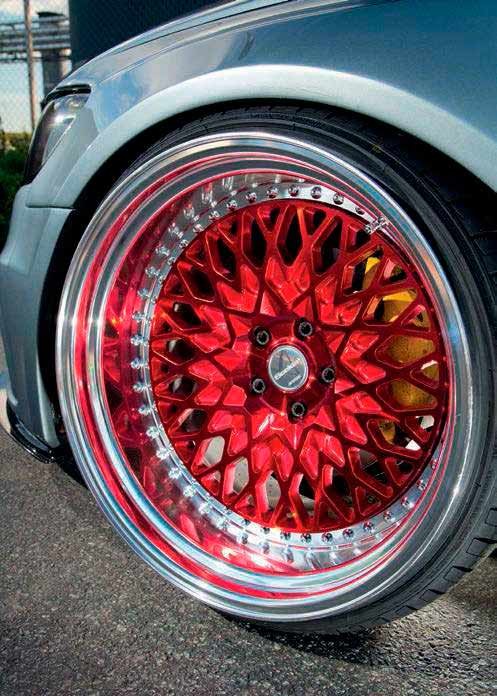 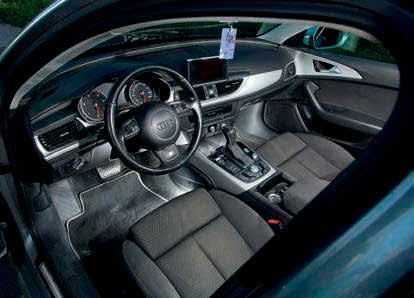 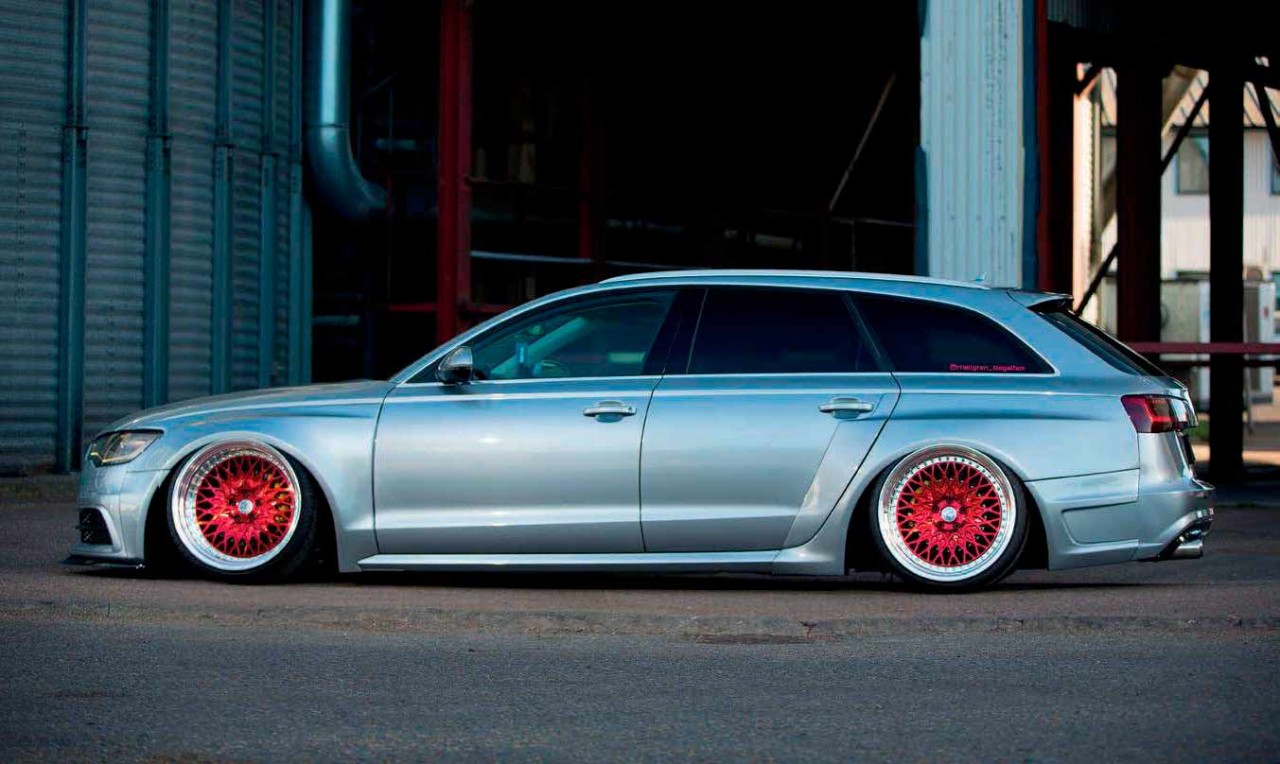 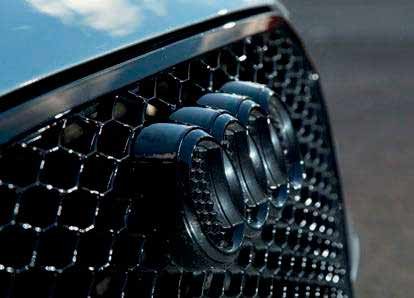 Wide-load coming through. The Maxton Design widebody kit adds some major girth. I just wanted a nice family car, I had no plans to build a project. Robin’s A6 proves he’s the daddy in more than one way. 12.5x20-inch Work Gran Seeker CCX wheels are a stunning addition.

Favourite modification on your car: The fitment of the wheels Hardest part of the build: To make the perfect fitment on the widebody kit Lessons learned from this project? Never rush, let it take some time

What’s next – any future plans? I’ve got some plans in my head, but I am keeping them as a secret for now

There may have been troubling ripples throughout the VAG post-dieselgate, and low-emission zones are steadily legislating dervs out of city centres, but diesel ain’t dead yet. Take the 2.0-litre TDI motor in this A6: in stock form, this gives you 175bhp and 280lbft. With a simple remap, Robin’s got his up to 210bhp, which is more than enough to keep him entertained. For UK readers, Revo can help you out here – their Stage 1 map takes the 2.0 TDI up to 210bhp and 346lb-ft, a simple £399 map that plugs in through the OBD port. The mid-range punch is pretty beefy too!