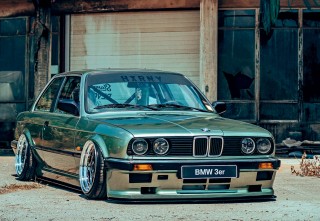 TALES OF THE UNEXPECTED STUNNING BMW E30 320I ON AIR

There’s an old proverb which has undoubtedly been fired in your direction at some point in your life by a grandparent or aged relative: ‘There’s nothing new under the sun’. A needlessly negative sentiment that grumpy people love to reel out, it’s actually a bible quote which aims to make the point that nothing mankind can create will really change the nature of existence, and it’s not within our scope to actually make anything new or original. 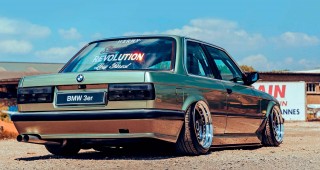 It’s nonsense, isn’t it? Absolute hogwash. Flick through the pages of this magazine, and you’ll see that every single car featured in here exhibits fresh new ideas, imaginative ways of thinking, original approaches and executions. To hijack another saying beloved of the elderly, ‘There’s more than one way to skin a cat’ – and, as revolting an image as that may be, it’s a far more positive message. Take the example of the E30-generation 3 Series, for instance – here’s a car that debuted way back in 1982, has proven a tuners’ and modifiers’ favourite ever since, and yet the scene still finds new and exciting ways to surprise us. Maxim Bollé’s E30 is proof positive that there’s life in the old 3er yet, as you can see: this Brussels-based enthusiast has crafted a fresh twist on the E30 platform, and it’s the type of build that reveals ever-deeper levels of intrigue the closer you look at it. There are unexpected twists at every turn.

“The engine bay was the best thing I did on this car, but the biggest pain in the ass. It took five full workdays to complete, with the help of one of my best friends – I did the full metal and prep work and he did the wiring jobs”

Perhaps the most jarring element at play here is that Maxim’s last build before this one was toting a rather boisterous engine swap. A car body specialist by trade, he uses his day-job skills to perfect his hobby projects, and the previous creation was an E30 show car packing a meaty M60 V8. “I have a big love for the older BMWs,” he says. “The perfect lines and simple fabrication make them so special, and so good for modification.” And he’s not one to stick to a script either – readers with eagleeyes will have spotted a sober M20 motor in the bay of this new project, and that’s quite a different vibe. Why downscale in this manner? Well, why not? 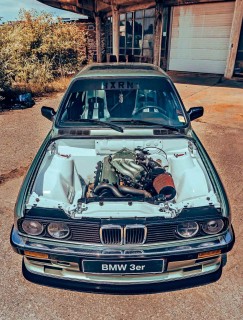 This whole build is, in fact, an exercise in the unexpected; time and again it surprises with its offbeat choices, not least of which is the colour of the shell. The car’s original shade, it was the first thing that drew Maxim in. “It was the Platanengrün metallic paint that made we want the car, simple as that,” he recalls.

“In real life it’s just… wow.” He’s right, it really does pop, it’s one of those colours that seems to shape-shift in different lights, flexing between various shades of green depending on the hour of the day and the severity of the cloud cover. What’s more, even though it’s a factory shade, it’s an inherently offbeat choice: over its lifespan, the E30 model was offered in an impressive range of colours, 53 different ones in all, and Platanengrün metallic is one of the rarer options. Only offered from 1984-1987, it’s just not something you see a lot of. And to Maxim’s magpie eye, that made this car the perfect base for a project. “I bought the car totally stock,” he says. “I was planning to keep it all fairly restrained, although I just got carried away – it’s now been fully rebuilt from top to bottom; the engine, outside, inside, underside, nothing’s been left alone.”

The more he worked on the E30, the more it morphed from a weekend toy into a dedicated show car, and the crowning glory of the project is that superb engine bay. Sticking with the M20B20 engine is a slightly unusual choice, as for a lot of people it’d be the first thing to go; it sits in a weird position in the model range, as it’s the smallest of the six-cylinder options – it doesn’t have the effervescence of the four-pots or the big lungs of the larger six-pots. But Maxim saw potential here.

Leaving the engine largely stock, save for a custom exhaust system and a cone filter, he focused his attentions on the bay itself. “The engine bay was the best thing I did on this car, but the biggest pain in the ass,” he says. “It took five full workdays to complete, with the help of one of my best friends – I did the full metal and prep work and he did the wiring jobs. We had no problems with it, everything went to plan, it was just arduous work.”

Well worth the effort though, wouldn’t you say? Probably the finest surroundings that a humble M20B20 has ever sat in. You’ll also spot the strut tops adding a splash of colour in the bay, and that’s thanks to the full Air Lift Performance system that Maxim opted to fit – he’s gone for a manual setup just to get it nice and low on demand and still ride well. The way it hard-parks is very sweet indeed, the arches perfectly filled out by a set of three-piece OZ Futuras. “I’ve fitted Futuras to all my E30s, you could say it’s my favourite wheel for a classic BMW,” he explains, and you’ll find no argument here. With the gold hardware and the aggressive widths (the rears are 10”-wide!), they do a lot to update the stance while retaining a classic vibe.

“From the drilled-out door handles to the craftily integrated Viair gauges and the fusion of the M Tech 1 kit with the SRS side skirts and custom splitters, this car is a riot of detail” 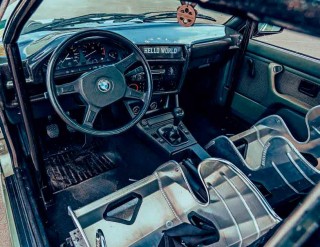 We find yet more tales of the unexpected in the interior, most notable of which is the pair of boisterous, in-your-face Kirkey seats. These uncompromising aluminium race buckets are the polar opposite of the squishy chairs that would have been bolted into the car at the factory, being the sort of thing you’re more likely to find in an ultra-lightweight track weapon like a Caterham. It is actually possible to order these from Kirkey complete with strategically positioned padding, but it’s pleasing to note that Maxim has opted to keep it minimalist and essentially sit in a nicely sculpted bean tin. Why? Because it’s not what you’d expect, and that’s reason enough. Pairing the seats with a set of Takata harnesses infuses an element of the JDM, again because it’s not something that happens a lot on the Euro scene, and if you look closely you’ll spot that the brutally functional roll-cage has had a disco makeover by virtue of adding some colourfully sparkly metallic paint.

The thing that really caused us to make a cartoon double-take, however, was the dash. Because at first glance it appears to simply be a stock E30 dashboard, it’s the right shape and size and profile… but it’s quite glossy, isn’t it? Look again and you’ll spot that it’s actually painstakingly crafted from carbon fibre. Something which would save a decent chunk of weight in a race build, although of course that’s not what this is; it may have the cage and the buckets of a race car, but this creation is pure show car chic. Every decision made here has been simply to prove that such things can be done, that there are new ways to remix the E30.

“My chosen style for this build? Just to be a bit crazy, but with a touch of class,” muses Maxim, and that summation makes a lot of sense. “For me, the car is on point. It took me six months to complete, and I do like a racing look. Nobody likes a soft interior, I think, and once I found out about the Kirkey seats in the autocross sector I needed those in my car! And the engine bay’s my favourite part, for sure. It still makes me smile every time I look at it, after all those hours of hard work.” And it’s that essence which really characterises the build: from the drilled-out door handles to the craftily integrated Viair gauges and the fusion of the M Tech 1 kit with the SRS side skirts and custom splitters, this car is a riot of detail. At first glance, it may appear to simply be a bagged E30 in an unusual colour, but every subsequent look rewards you with yet further details. So you can tell your grandma that there are many new things under the sun. The proof is right here, sparkling alluringly in its rays; a fresh new take on an age-old platform. There’s plenty of life in the E30 yet. 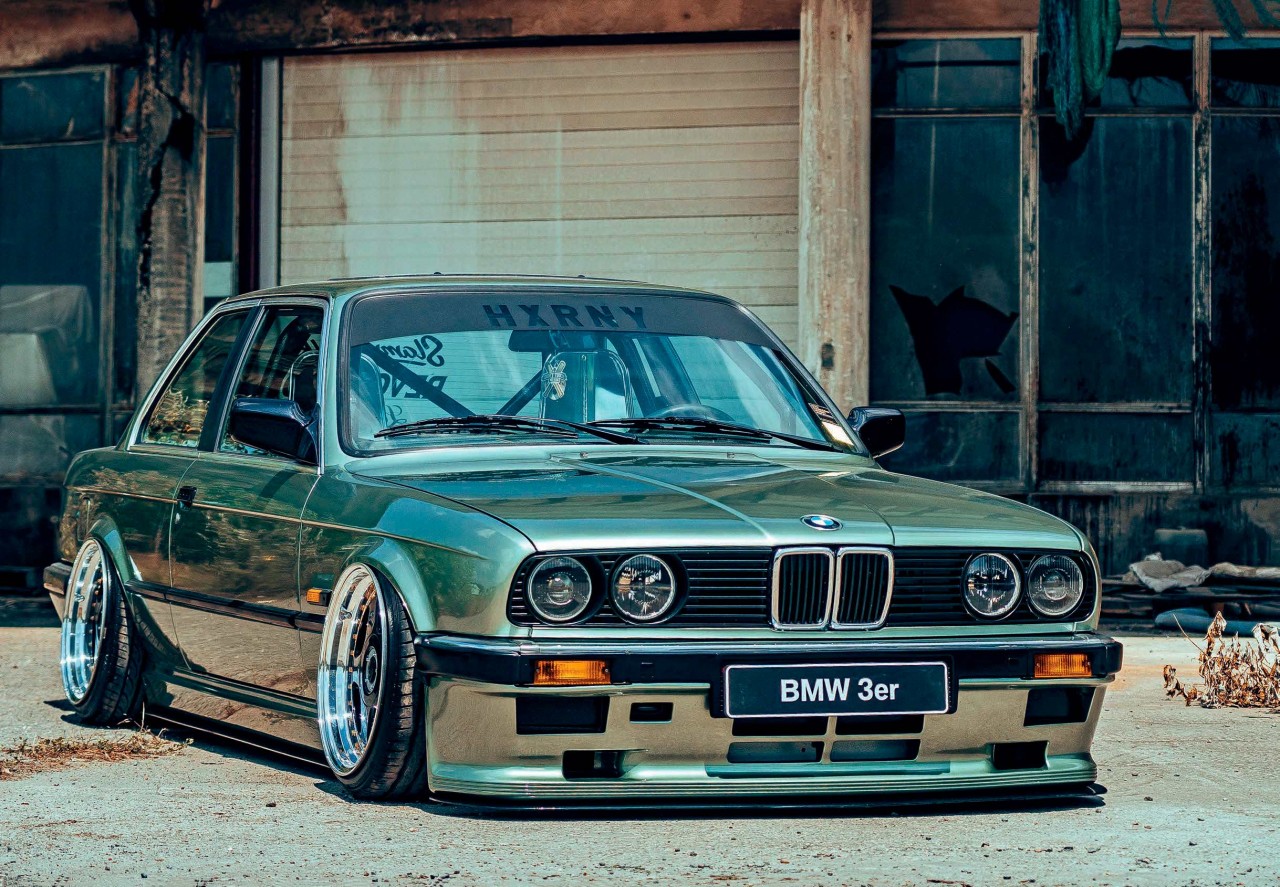 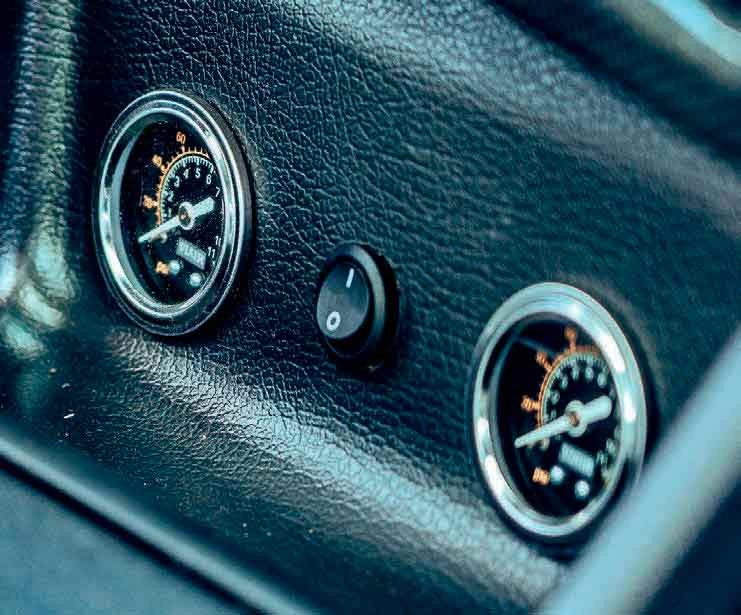 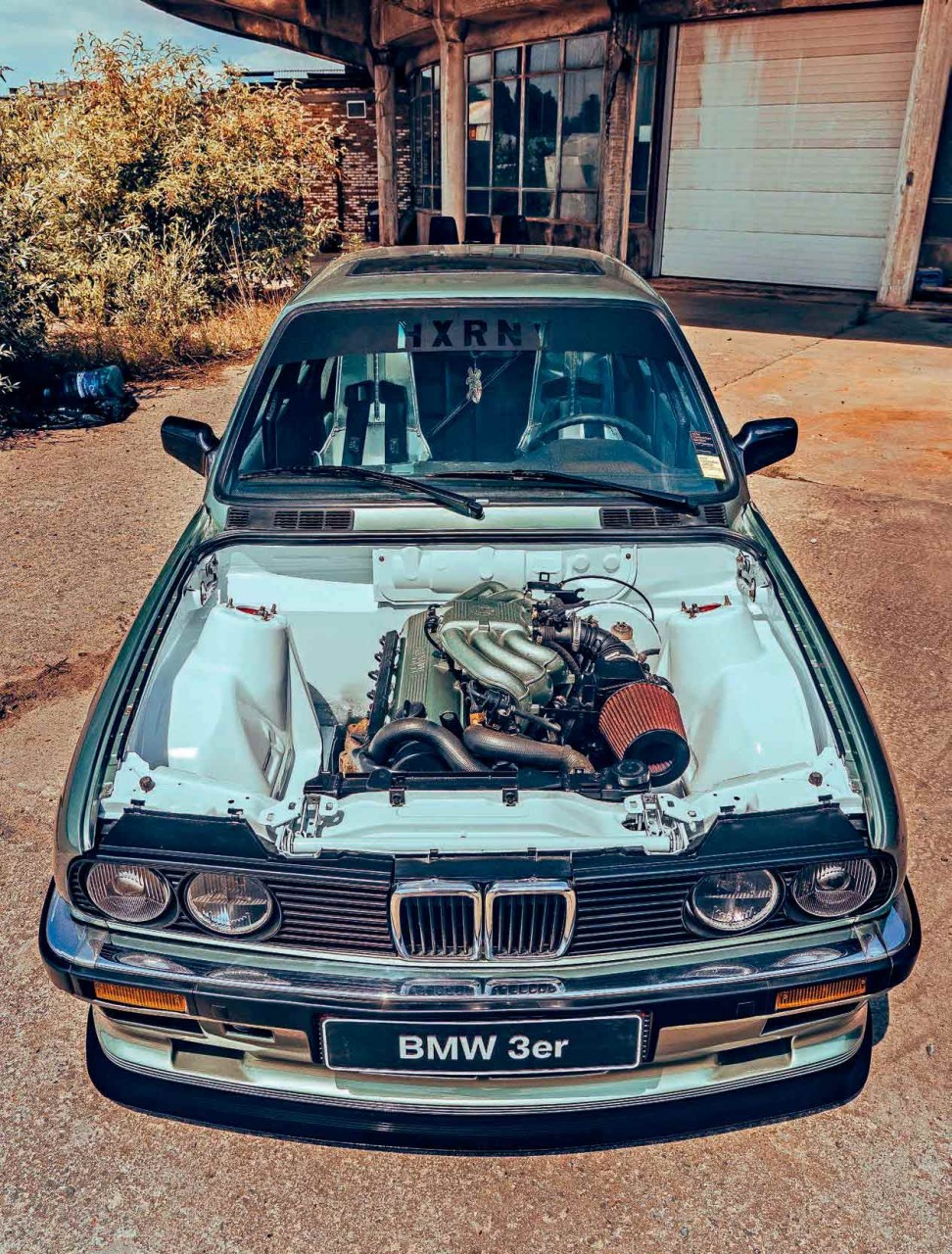 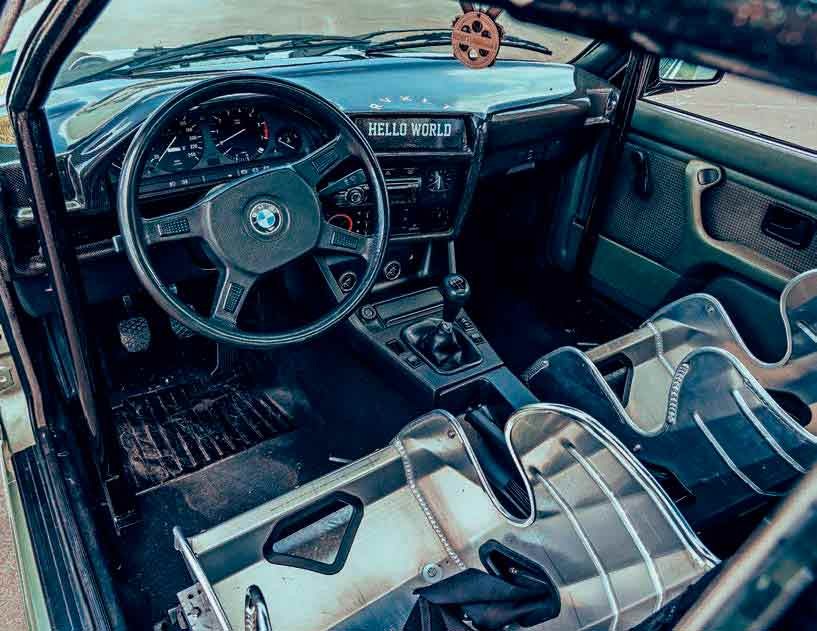 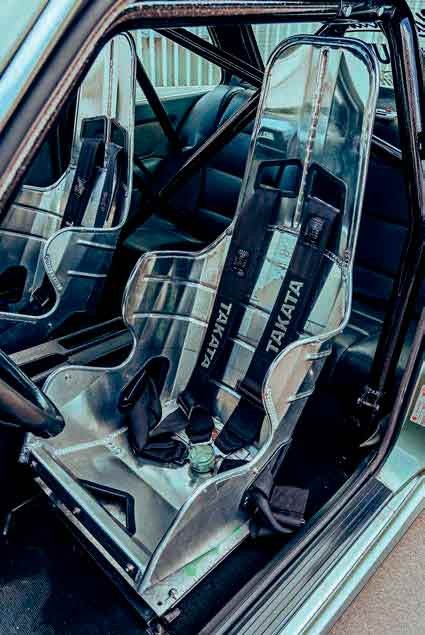 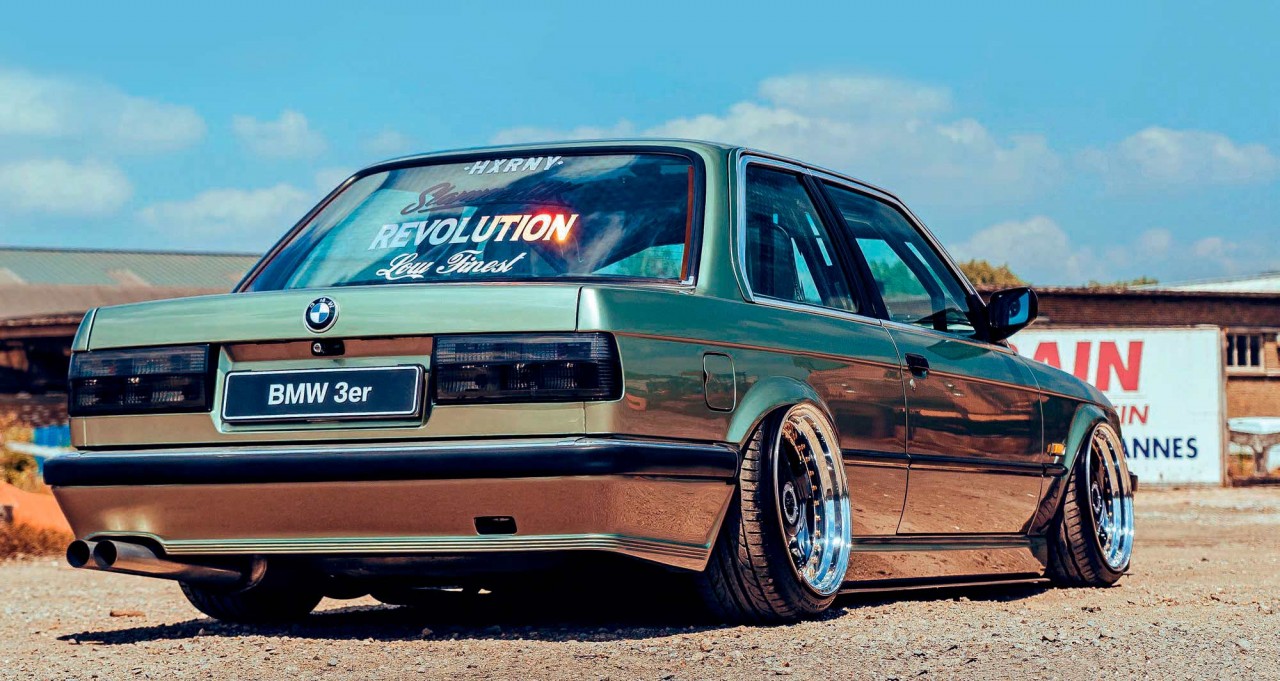 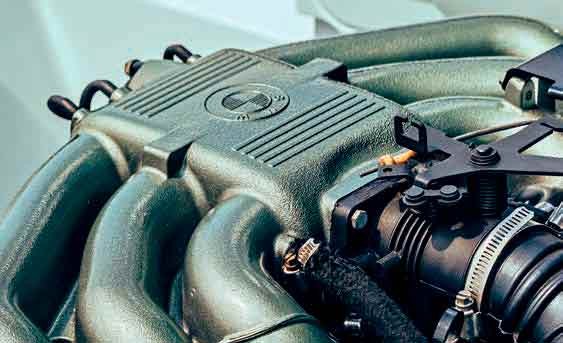 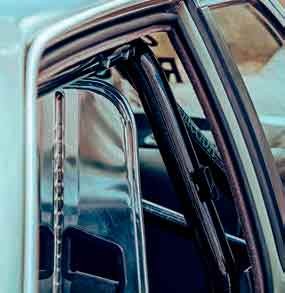 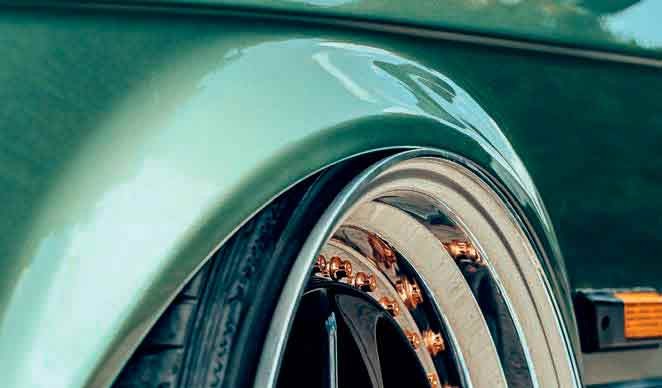 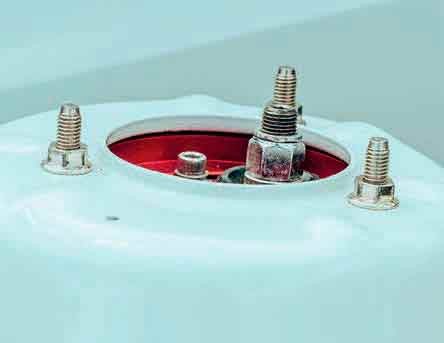 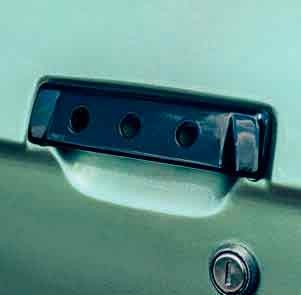 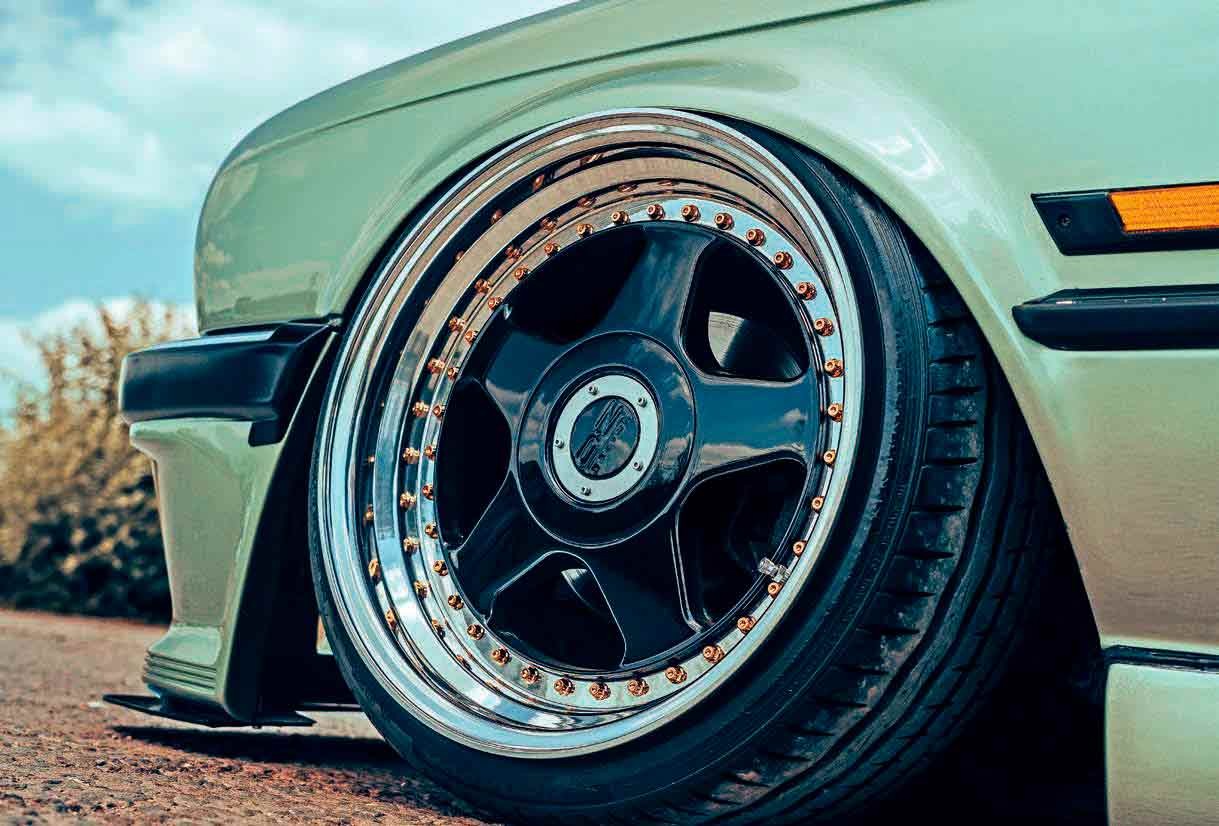 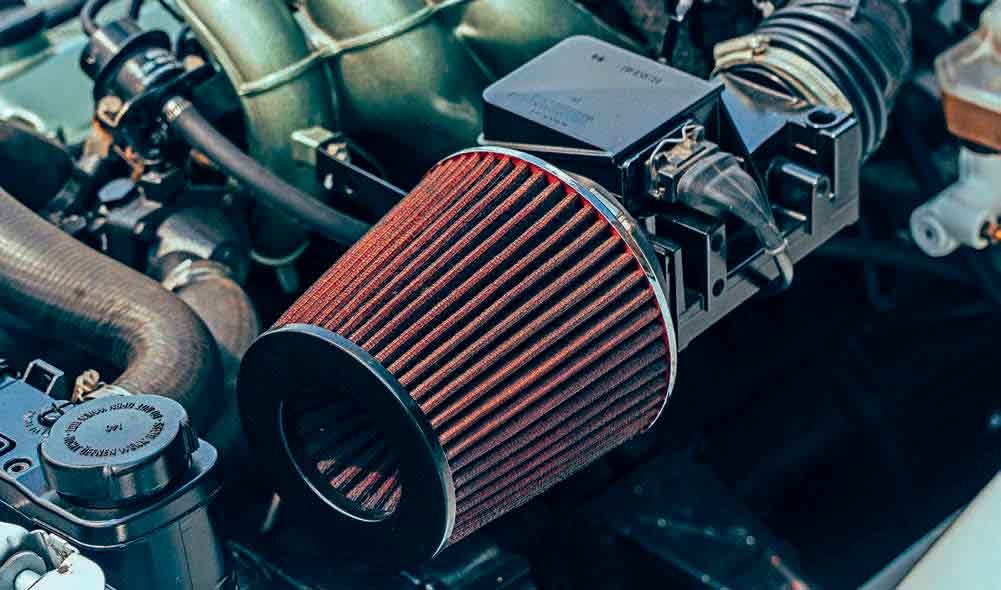