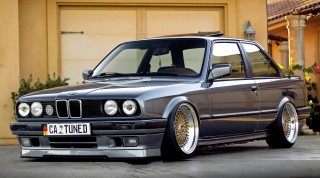 Sonny & Share Father - and son-built E30 325is. Words: Daniel Bevis Photos: Dennis Podmarkov and Igor Polishchuk There’s a lot of love tied up in this Space grey E30. It’s flawlessly finished and features astounding attention to detail, and it’s all thanks to an unbreakable father-son bond…

‘The sharing economy’ is a term that’s been appearing with increasing regularity in the press in recent years. What it basically means is that people are renting beds, cars, skills and all sorts from one another using platforms that never before existed; booking accommodation on Airbnb, organising local car-pooling to get to work, finding someone in your neighbourhood who can fi x your boiler while you assemble their Ikea furniture for them – the idea that ‘what’s mine is yours… for a price’ is a thoroughly modern behaviour. 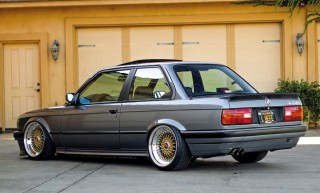 Sharing, of course, is nothing new in itself. It’s something humans have done since the dawn of civilisation, ever since the species stopped beating each other’s heads with clubs and instead roasted a freshly stunned boar together over some newly-discovered fi re. And sharing is at the very heart of this CAtuned E30 project – it’s a father-and-son endeavour, but daddy hasn’t bankrolled the whole thing… no, Dan Gastelum and his son, Landon, agreed from the off that everything with this 325is would be split neatly down the middle, 50/50, fair’s fair.

Each of them has a unique set of skills and experiences to bring to the table. 20-year-old Landon brings youthful exuberance and a keen eye for trends and timeless modifying styles, while 45-yearold Dan has been around the block a few times, BMW-wise. “My first car was actually a Chevy C10 short-bed pickup truck, given to me by my father-in-law when I was 18,” says Dan. “But I’ve owned multiple BMWs over the last 15 years: a 2002 E46 M3, 2002 E39 540i Sport with six-speed manual, 2013 E70 X5 M Sport, and I currently own a 2017 F15 X5 M Sport – the wife’s grocery-getter!”

As is so often the case, this marque obsession was ingrained from an early age; when Dan was a schoolboy in the second grade, his old man sent him to school in a T-shirt with a 2002 on it. “I love him for that!” he laughs. And now that generational automotive bridge has firmly and tangibly extended onward down the line, as the shiny vision of pride and teamwork here ably demonstrates. 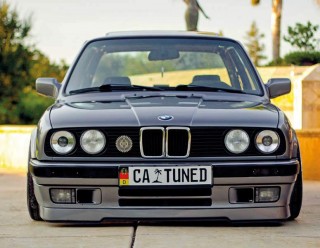 This is undeniably a tremendously classy build, focussing on perfecting the details rather than radically altering the concept, and it’ll come as little surprise to those familiar with CAtuned that Igor and his crew have had a significant hand in this too. For those not in the know, CAtuned is the motorsport and custom wing of Auto Heaven, a full service, maintenance and repair outfit in Sacramento, California, which has truly established itself as a global hub for quality retro BMW builds – and given that Sacramento is just a handful of miles from the Gastelum family home in Elk Grove, this was always going to be a celestial affair.

“My son Peyton and I had previously rebuilt and modified an ’1987 BMW E28 that had been in our family since 1990,” Dan explains. “Peyton purchased the car from his grandfather - it was a gem! We got to work with a motor swap, fitting an M30B36 stroker motor from BimmerHeads, M5 interior, M5 brakes, M5 suspension, coilovers, AC Schnitzer Type 2s, the works. “Why did I choose an E30 this time?” he continues. “Well, it was the hot car when I was at high school, I always wanted one, and Landon was really keen on the idea of us building one together. He actually found this car in San Diego. We had been looking for an E30 for a while, and the condition of this car when we found it… hell, this car was roached! Just totally hammered! It had dents, torn interior, bald tyres, bent up wheels, and a motor that was tired with 246,000 miles on it – the thing leaked oil all over my driveway. But it had good bones! No rust, E30 M3 seats, and a set of BBS RSs. Count me in!” 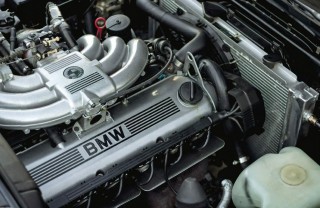 The first thing to address was that wheezing motor. It had huge oil leaks and there didn’t seem to be any point in trying to plug up one or two holes when it was leaking from every possible place, so CAtuned pulled the M20 and fully rebuilt it from the ground up, adding in a few upgrades along the way. With rebuilt injectors and a Miller MAF conversion it’s far perkier than stock, while the powder coated intake manifold and valve cover make the bay look better than new.

Next on the list was to sort those wonky wheels – Dan and Landon shipped the iconic RS rims off to Paul Ehrlich at Ehrlich Wheel Works to be thoroughly rejuvenated. What came back was a glimmering staggered setup measuring 8.5x17” up front and an extra half-inch of width at the rear, with 2” and 3” lips respectively. To get these sparkling rims tucked oh-so tastefully in the stock arches, Dan and Landon made a decision that we suspect they’d been plotting all along: to fit a full Air Lift suspension system. “It just makes sense,” says Dan, as if any justification were needed. “Air-ride gives you better flexibility and adjustability in driving height, plus you get that swag look when you park the car - lay them guts in the weeds!”

The dented and abused bodywork has been fully refreshed, as you’ll be able to see by gazing down the flanks of the two-door body in the photos here. The whole thing is as straight as an arrow, it looks as if it could have rolled off the production line last week. The choice of Space grey is inspired as well, accentuating as it does the attention to detail inherent within this build. This isn’t a car that needs to shout loudly about its credentials, it’s just oozing charm and poise from every pore. Proof positive that you don’t need to be boisterous if your focus is on doing things right. 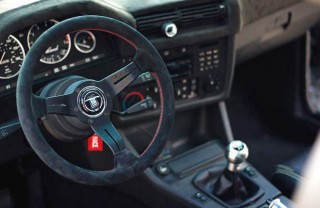 Naturally you can’t perfect the exterior and leave the insides all tatty and forlorn, so the innards have been treated to a full custom job by Acme Tops and Tunes, lavishing the seats with baseball-stitched super-soft leather, complemented by CAtuned’s suede dash top and black headlining. The audio’s been exponentially upgraded too because hey, the E30 was an ’80s icon, and you need the tunes to provide the soundtrack. A bit of hair metal perhaps, or something with a lot of synths – whichever retro fancy takes them, the fellas have the JL audio gear to cope. “My long-time friend Rene Cornejo, owner of Acme Tops and Tunes, put a twist on the interior with the reverse double stitching on the seats and the clean stereo installation,” says Dan. “It took two weeks from start to finish with no problems! These guys are legit.

“The over-arching idea was to keep the car old-school with a touch of new flair,” he goes on, and it’s pretty safe to say that the finish satisfies the brief. “When I was a kid I always wanted my dad to put BBS RS rims on his BMWs – it’s a timeless wheel, and all the badass Beemers in the 1980s and ’90s had them – so I’m happy to have ticked that box now. And of course we had the input of my good friend Igor at CAtuned throughout, he really did help us out a lot with this build.”

All-in, the creation of this quintessentially Californian 3 Series took just nine months, which is pretty phenomenal when you consider the extent of the transformation, and it appears to have spurred Dan on yet further. “Next, I want to build a car with all three of my sons,” he exclaims, with some vigour.

“We’re going to build my dad’s Euro-spec ’1985 E24 M635CSi.” Honestly, this family is insatiable – they won’t be satisfied until all of northern California is liberally sprinkled with gorgeously restored and tastefully updated old BMWs. And you know what? That’s just fi ne with us­. 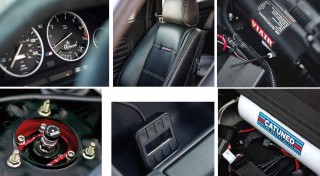 THANKS Special thanks to my wife’s patience, CAtuned, Acme Tops and Tunes, EWheelWorks, and Bavarian Restoration. And to my son Landon - this was a blast!

We had been looking for an E30 for a while, and the condition of this car when we found it… hell, this car was roached! Just totally hammered!”