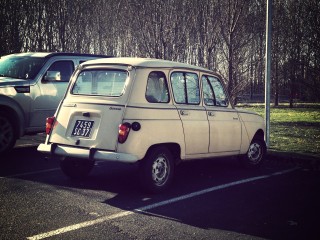 When I told a French friend that I was going back to England in the Renault, he assumed I meant that I would drive it to the local station, then catch a train. He was shocked when I told him that I was going to drive 600 miles up through France.

With the new driveshafts fitted, all seemed adequately healthy on the mechanical front, but the R4 was a bit down on power so the least I could do was change the plugs. A sound decision: the old ones did indeed look a bit grim. But I regret-ted not pushing the boat out and getting a new set of leads, when I discovered that one was loose on its plug and all were a bit brittle.

As a stop-gap, I replaced the loose lead with a spare I had on my shelves. On the subject of ignition, my R4 friends sucked in their teeth when they saw that I had a Spanish-made Femsa distributor. These are apparently known to wear, and I was advised to locate a Ducellier from a breaker, ready to pop in when the Femsa plays up.

SHARON RATTLES BACK TO BLIGHTY

I had intended to fit the new tail-gate rubber before departure, but examination of other R4s revealed that I needed not only the ‘D’ item I had, but also a specially shaped lower seal (pictured right). I ordered it from Melun Retro Passion (melun-retro-passion.com), the principal R4 parts specialist. The rubber arrived the next day, but unfortunately I ran out of time so I taped the ‘D’ in place and hoped this would fix the squeaking. Alas it didn’t, but judicious wadding with carpet offcuts did the trick.

There’s no way that a Renault 4 is an autoroute car, and ‘Sharon’ was not in her element on the N20, but once I had switched to cross-country departmentales it bowled along happily, especially on long straights with a slight downhill incline. On these roads, progress was not notably slower than in my modern Peugeot. The car didn’t miss a beat, and I made Calais in time for an earlier crossing. The sole gremlin was that the tailgate would occasionally spring its catch - a result of both body flex and a worn mechanism. Along the way, the Renault attracted a number of admirers. It is a car that inspires real fondness, on both sides of the Channel.

The next adventure was a family trip to Wales, five-up plus cat. Avoiding motorways, the car loped along contentedly and in Wales it felt just right, its narrowness an asset on tight lanes and its suspension well suited to unmade tracks. Some hills demanded a slow haul in second, and the odd really steep incline had to be tackled in first. One restart on a slippery climb even needed a run-up, but we still felt pretty proud of the old girl.

Martin Port has not set their biography yet