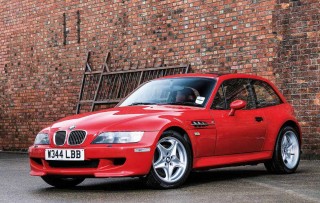 Come on, be honest – were you one of those who criticised the Z3 M Coupé when it was first revealed at the 1997 Frankfurt Motor Show? Don’t worry, you’re not alone. But, 20 years on, tastes have changed, and the passage of time has been very kind to BMW’s quirky, M-powered mini shooting-brake. Nowadays, good examples are appreciating and, with that low, aggressive stance and those bulging wheel arches – not to mention a level of performance that’s still impressive, even by present day standards – it’s not hard to see why.

Manufactured from 1998 until 2002, the E36/8 Z3 M Coupé and its Roadster sibling, were developed under the leadership of BMW engineer, Burkhard Göschel. He argued that a fi xed roof was essential to enable the Roadster body to deliver the kind of chassis control needed for a proper M car. So, after some wrangling with the BMW hierarchy, he got his way. However, cost restrictions meant the Coupé had to share many parts with the Roadster – including almost everything from the A-pillar forward, and most of the interior components, too.

Engines and gearboxes were assembled in Germany but then shipped to BMW’s factory in Spartanburg, South Carolina, for the car’s final assembly. And although the semi-trailing arm rear suspension was shared with the M Roadster, the Coupé’s tin-top meant it claimed 2.7-times the torsional stiff ness of the convertible.

Originally, the 1998 UK list price of the car was a hefty £40,595, which put off many potential buyers. But the five-speed manual Coupé did pack an impressive specification, boasting a limited-slip differential as standard, plus leather upholstery, electric windows and mirrors, plus a full M Sport makeover that included body-coloured bumpers, some tasty alloys, ABS, air-conditioning, electric heated seats, metallic paint and quad exhausts. 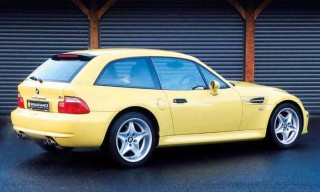 In the UK, 821 examples were sold between 1998 and 2001, when a revised version was launched, packing a 325bhp S54 motor from the new E46 M3, plus switchable stability control, improved brakes and a tyre-pressure warning system. The 0-62mph time was cut by 0.1 seconds, but just 168 UK examples were sold between giveaway and, more worryingly, the S54 engine bearing shells can fail – the parts can be replaced for around £1,000, but that’s a lot less than the cost of a new engine. Aside from that, just watch out for rusty diff’ mounts and the inevitable worn suspension components.

Z3 M values are determined by condition, mileage and provenance and, according to Robert Redman at trade gurus Glass’s: “These cars tend to be enthusiast-owned and so get well looked after. So looking to the future, the Z3 M Coupé’s low volume and old-school muscle-car appeal mean its classic status is assured.”

This view is backed up by Graham Beeson: “These cars are becoming very sought after and commanding high prices – I won’t be surprised if, within 18 months, you can’t buy a good, clean example of the Z3 M Coupé for under £50,000.” 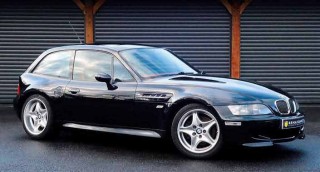 So, my advice is to buy the best you can afford, keep it original and properly maintained. A few privately-advertised cars do appear, but it’s safer to buy your Z3 M from a recommended BMW specialist. I discovered two contrasting examples at Renaissance Classic Sports Cars. The first, a black, 72,000-mile, 2000 model, is currently advertised for £34,995, while the more extrovert among you might be more taken with the rare, one-owner Dakar yellow 1999 example. This car, for sale at the same price, comes with a full BMW service history, and has covered just 76,350 miles. 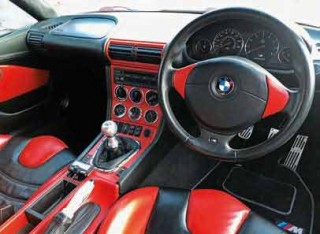 Left: Something for the extrovert; this one-owner Dakar yellow 1999 Z3 M Coupé has a full BMW service history, a mileage of 76,350 and a price tag of £34,995. Below: The Z3 M Coupé offered a comfortable and cosseting interior.