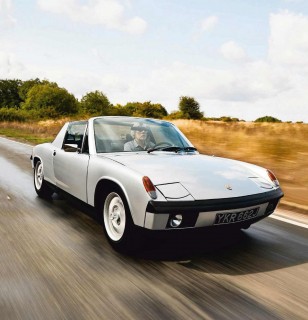 Ocean-crossing Porsche 914-4. From cherished American show car to unloved Brit salvage – a rollercoaster 914 life. Life Cycle The transatlantic life and times of a much-used Porsche 914-4. The life story of a Porsche 914-4… This special-order Porsche has changed continents almost as often as it has owners. We follow its trail from Virginia via Italy all the way to Northampton Words Russ Smith. Photography Xisco Fuster.

On Thursday 12 October 1970, the Porsche 914-4 with the VIN number 471 290 6184 was the 13th car of the day to roll of the Karmann production line in Osnabrück, Lower Saxony. It was a special-order car with black paint, tinted windows and the rarely ordered limited-slip differential. From there it was shipped to the supplying dealer in Washington DC and collected early in 1971 by Porsche-loving couple Phoebe and Bob Harper from neighbouring Virginia.

‘The interior had had it, the rear window leaked and the floorpan had rotted. But I saw the car’s potential’

Phoebe explains, ‘All that was some time ago, but there are just some things you don’t forget. We had already owned a yellow 1970 914, which we sold, and got the new 914 by special order – we specifically wanted black because it shows so well in concours. The standard bumpers were chrome and we ordered those painted black as well. Also, we were active rallyists and autocrossers, hence wanting one with a limited-slip differential. The original VW-type steel wheels were replaced with alloys bought from an independent source at $50 each.

‘Bob and I were very enthusiastic Porsche nuts. We lived and breathed Porsche. When we first met he owned a ’1959 356A coupé and I had a 356C, which was our first concours winner. We even spent our honeymoon at the 1966 Porsche Parade annual gathering in Colorado Springs. For some time Bob was also president of Porsche Club of America’s (PCA) Potomac region.

‘When the car arrived in Virginia there was a dent from a loading strap in one of the doors. Thankfully we had a wonderful small body shop we worked with and it was able to make it look like nothing ever happened. I remember that there wasn’t much of a tool kit with the car so I sewed one from black vinyl and we outfitted it with appropriate tools. 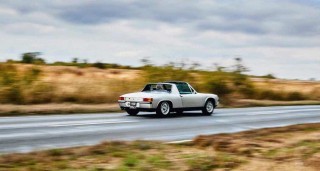 ‘We took a lot of honours with our 1971 black beauty. In fact with that car I became the only woman to have won the Overall Trophy for the Porsche Parade in the USA, the same year we got the car. And because a man didn’t win the Overall award, they changed the rules so it would never happen again!’

Different times indeed. The 914 stayed with Phoebe Harper and was used to commute five days a week, when not being shown, right up until 1976, when it was reluctantly put up for sale to fund the purchase of the vineyard in Virginia that the couple ran until their retirement in 2010. Along the way they returned to Porsche ownership, with a 944 Turbo amongst others.

The Porsche’s next owner was also a PCA Potomac region member, Trudy Brophy. ‘I bought the Porsche when I was a lieutenant (junior grade) in the Navy, stationed at the Bureau of Naval Personnel in Washington DC. The Porsche and I took advantage of the club’s road rallies and other activities.

‘Eventually I got married, resigned my commission, had a baby, and took the car to Naples, Italy, where my husband Jim – by now promoted to a Naval Commander – was stationed for four years. We liked it that much! By the time we got back to Virginia Beach I needed a mom-car, for carrying kids and their paraphernalia. Jim continued to drive it now and then for a number of years, then we gave it to a family friend, Mark Butler, in September 1990.’

The Certificate of Title records that Butler paid $10 for the car, covering a technicality for it to be ‘sold’ not ‘given’. It also confirms that by that point the car had covered 112,421 miles. Butler kept the car for a matter of months, carrying out some basic repairs before unceremoniously lipping it for $5000 to a British car dealer who was in the area on a Jaguar E-type buying spree.

Henry Pearman of Eagle E-types was responsible for the 914’s next trip across the Atlantic. ‘I bought half a dozen E-types from a dealer in Virginia. As well as those he had other Jaguars and this. I had space in the container for one more car and this was it; it was a stocking filler. It was all up together and running at the time; nice looking but with dull paint, so I brought it back and sold it to Lenham Motor Company.’

Peter Rigby was actually looking for a 356 but took pity on the 914. ‘I spotted the car in a sorry state at Lenham Motor Company in Kent. The guys at Lenham gave the impression they really did not want the car – it had been hanging around for about a year. It was matt black, the interior had just about had it, the rear window had leaked and as a result the floorpan had rotted. Also, the driver’s door had a huge dent in it. ‘But I loved the shape, it had original Minilites, and I could see the potential. I struck a deal with Lenham and to my recollection handed over £800 for the car.

‘My young son Sam and I set about stripping the bodyshell back to bare metal, at the rate of one panel per fortnight. It had been badly repaired and repainted at some time and covered in some kind of spray filler. The dent was removed by a good friend who also repaired the floor, matching the pressings in it so well that I couldn’t tell where he’d done it. We couldn’t get hold of any sill covers so we made those too.

‘I made most of the interior myself and had to apologise to my mother for breaking her lovely original Singer sewing machine. Hours were spent poring over colour charts before we settled on a period Porsche silver, paint code 936. I didn’t want to redo it the original black because I was worried that would show any imperfections in the body.

‘The engine was rebuilt and fitted with a new clutch by Care’s Garage. The guy rang me and said he hoped I didn’t mind but when he removed the tinware he thought it was a little tatty so he’d shot-blasted it and had it repainted. No extra charge!

‘The car was given an age-related numberplate and put back on the road late in 1993. I had a great time restoring the car and had no intention of selling it, but had an offer I couldn’t refuse from a guy, Peter Bartlett from Melton Mowbray, who said his wife saw the 914 at a show and loved it. He had a 1957 356A which had never been welded and had a Kamm-tail back. We swapped cars in May 1994 and I drove home in a piece of history – but that’s another story, one that doesn’t have such a happy ending.’

1994 – Steve Screaton spots an ad in the local paper

Peter Bartlett, who is believed to no longer be with us, had the 914 advertised for sale less than three months after getting it. Apparently his wife didn’t like it after all. A long-time fan of the 914, Steve Screaton had been looking for one since the late Eighties, but there were few about and never the right one at the right price.

‘Then I saw this one advertised in our local Leicester daily newspaper for £2950,’ says Steve. ‘It was largely positive but did mention “cockpit needs tidying and first gear broken”. Over a period of three weeks the price came down and down until I could resist no longer and my wife and I went to have a look. ‘The car turned out to be better than expected – a gleaming silver machine – and during the test drive Peter Bartlett drove like a man possessed. Possibly because his main passion was for old British motorbikes it was logical he would lean the car round corners. Whatever, the result was that I was hooked and a deal was done for £2250.

‘He delivered it and problems with insurance meant my own first drive was a few weeks later, but will never be forgotten. Left-hand drive, no first gear and quite a lack of brakes. Then reversing into the garage I noticed smoke coming from under the dash and that the reversing and tail-lights didn’t work. I decided to spend the winter sorting the problems ready for a full year’s fun in 1995. As it turned out, it was finally MoT’d and ready for the road in October 1996.

‘Then I tackled the interior, which had no carpets, split and holey seats and door panels badly covered in a slimy-feeling vinyl that smelt like it had been stuck on with fish glue. We then managed to use the car for over four years without a first gear. Being such a rare item with its LSD, the delay was in finding someone I was confident to have do it. And the spare cash.

Finally, in 2000, I took it to Gantspeed who completely rebuilt it and restored all five forward ratios to the penny of their £2253.63 quote. More than the car cost. ‘Also over time I’ve managed to track down and share correspondence with most of the previous owners, gradually piecing the car’s history together.

‘Over the years my wife and I have put 33,000 miles on the clock, often sweating on the 3000-mile insurance limit. It now reads (1) 48,000. We’ve done many tours in the car [he’s not kidding – I’ve seen the large board of rally plaques on his garage wall] and the car is very much a ‘driver’. I wouldn’t want it concours, it’s at its best just as it is – nice enough to turn heads but not too good to drive regularly. It always gets attention at shows anyway because there are so few 914s about, even once from a chap called Jay Kay at a Castle Hedingham show who chatted for a while and seemed very interested in it.’

It was one of those tours – 1500 miles round France in 2014 – that finally saw of the original engine. ‘It started running like a pig, dropping cylinders and struggling on hills, but kept going enough that we were able to made it home. I took it to Angus at the VW Camper Co in Banbury who found damage and past bodgery in the crankcase which meant it was scrap. Thankfully he managed to find me another one of the right sort and built it up with my crankcase and some new-old-stock 1.7-litre cylinder heads and a slightly warmer camshaft. The bill came to nearly £5000. ‘I get regular offers – as much as £26k – but always joke I’d sell my wife first. It’s staying because it still gives so much enjoyment every time we go out in it.’

‘We used it for more than four years without a first gear. The car is very much a “driver”’

1971 – an instant trophy winner. After being delivered new to the States, the 914-4 bounced to Italy and back, then on to the UK. Bob Harper detailing the car in the early Seventies. Now painted silver, the car lives a new life in Europe. 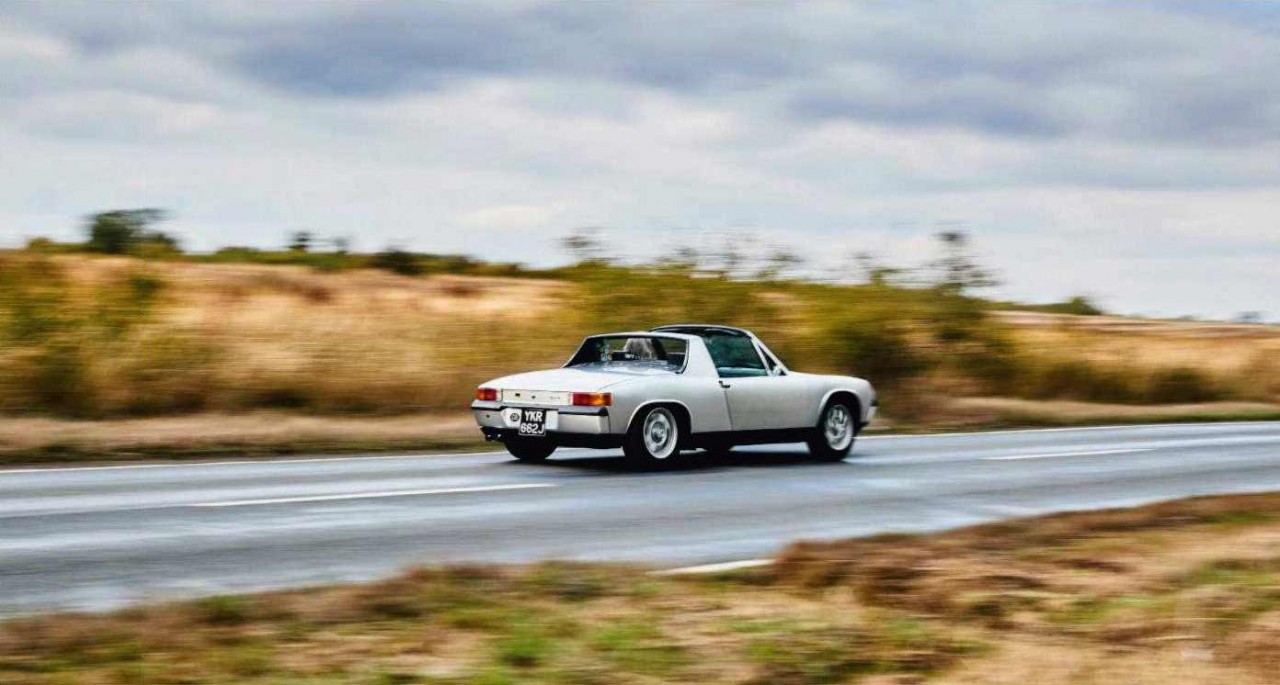 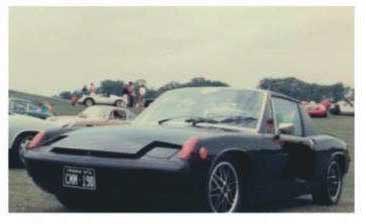 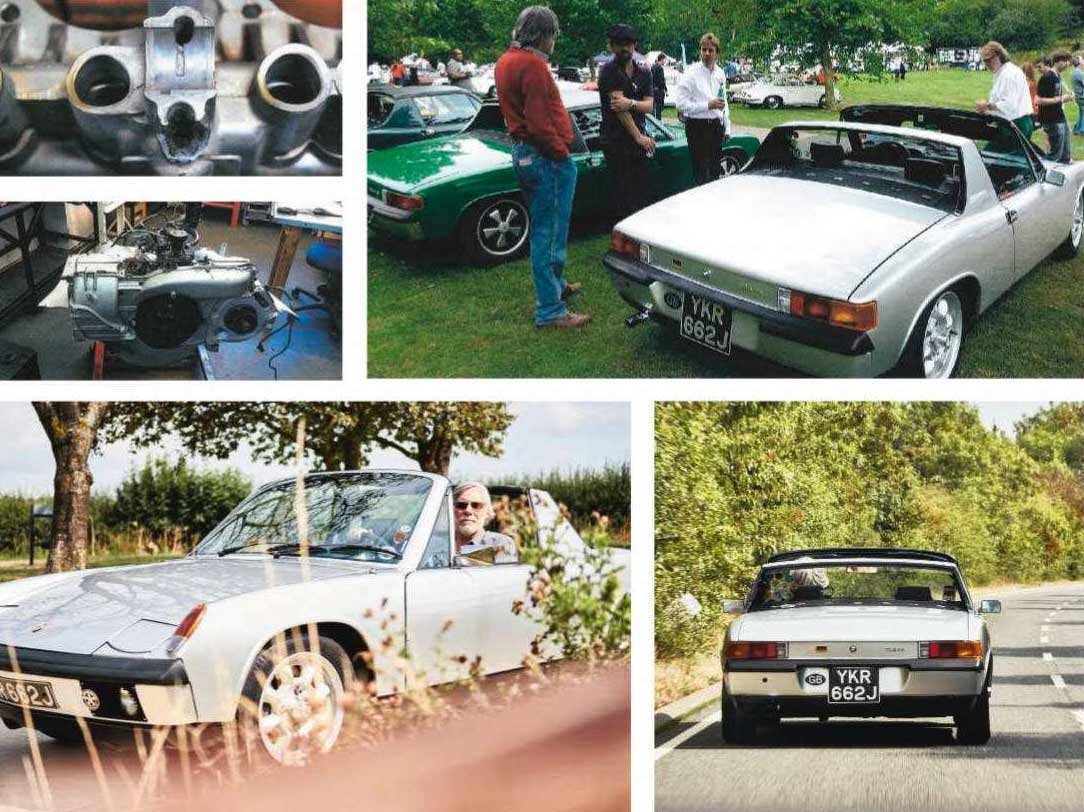 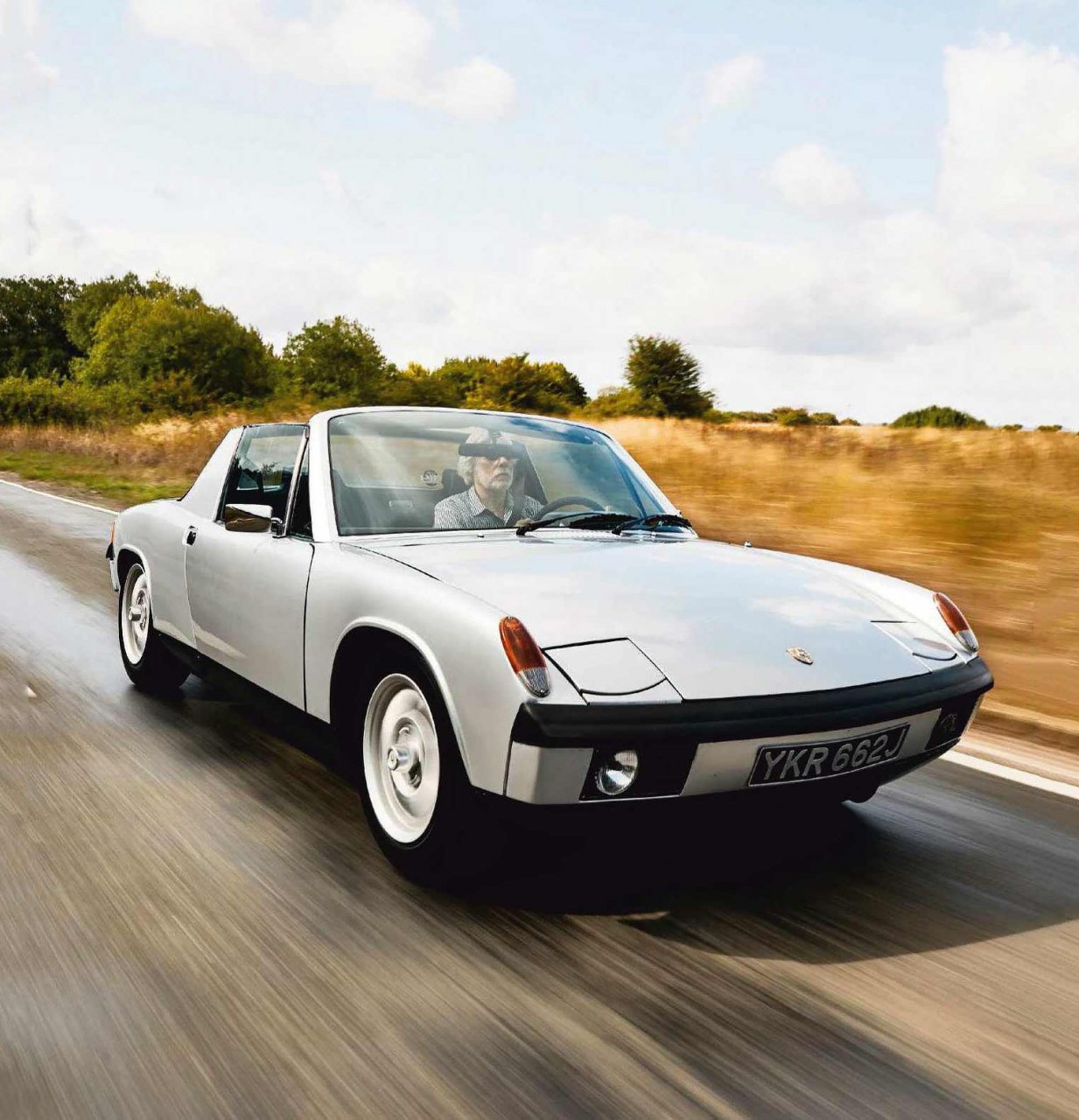 As spotted at Lenham Motor Co after it was imported to the UK in 1992. The previous owner’s spirited demonstration convinced the current keeper to buy it. The 914 enjoys a busy life. Peter and Sam Rigby stripped the bodyshell back to bare metal by hand. Of on one of many tours and rallies the car has completed. Crankcase failure struck in 2014. Engine built with mix of old and new. Jay Kay turned out to be a 914 fan. Steve has turned down numerous offers for the 914. Steve Screaton battled through a list of faults.