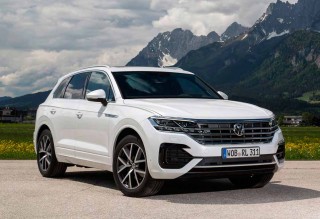 First Test 2019 Volkswagen Touareg R-Line 3.0 V6 TDI 4Motion MkIII. The Touareg was a pioneering car for Volkswagen, the company's first SUV. Originally launched 15 years ago, the second-generation model arrived in 2010, and now here is the third one. It's no longer the lone SUV in the Volkswagen range, heading a line-up of four with the T-Roc, Tiguan and Tiguan Allspace.

It's a big jump for the Touareg this time, nudging the Volkswagen flagship further up-market and equipping it with a lavish array of technology. It has also grown in size; 77mm longer and 44mm wider, but weighs over 100kg less thanks to its part-aluminium body. It is based on the same chassis structure as an Audi Q7 and Porsche Cayenne. A body redesign has freshened the way it looks, and the cabin has been transformed to a standard of style and quality that now surpasses most of its rivals. The car remains a five-seater, with no seven-seat option, but now has a bigger boot increased by 131 litres. 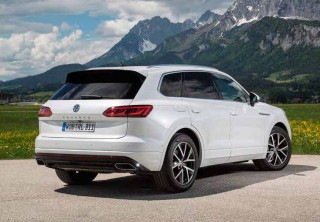 The new Touareg has a very capable feel behind the wheel, and cruises serenely on a motorway with excellent refinement from its 282bhp 3.0-litre V6 engine. This is the higher powered of two diesel units in the range, the other being a 228bhp powerplant. A V8 diesel will be coming later this year, and Volkswagen says that eight out of ten Touaregs will be diesel powered. Equipped with VW's 4Motion all-wheel-drive system, the car has some off-road capability, but that's not what it's really about. Road behaviour is mostly very civilised: it feels securely planted on the bends and body roll is commendably low. A roll stabilisation and active chassis system is in control of body movement, so this could be eliminated entirely. But that would feel oddly unsettling to passengers, so some minimal lean as the car changes direction is maintained.

Ride quality is mostly very good, although it doesn't entirely damp out the potholes. There is a calm neutrality to the driving experience that gives the Touareg a certain serenity but means that it isn't especially engaging. It's quick for a big SUV, with a 0-62 sprint time in around six seconds, and has plenty of mid-range punch. It comes equipped with four-wheel-steering, to help low-speed manoeuvring. Steering feel isn't especially tactile though. What's really good is the turning circle. For a big car, it's impressive at 11.7 metres, and only slightly more than a Golf.

The Touareg's interior design is a big leap forward. It’s premium calibre, top notch for quality and design. The car's 'Innovision Cockpit' includes a 12-inch touchscreen and there is a head-up display. The 'ergo comfort' seat design has already been given an award by the German healthy back campaign and includes a variable massage facility. 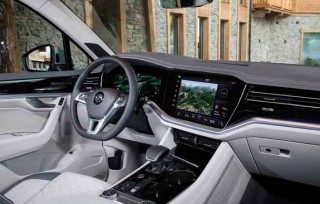 The level of technology on this car is remarkable. It includes a pro-active occupant protection system that automatically detects any sudden swerve motion, and reacts by closing any open windows, moving seats upright, tightening seat belts and activating the brake lights. There is also a night vision feature in the headlights that detects and illuminates any objects ahead that you wouldn't otherwise spot in time.

Full pricing for the new Touareg hasn’t been announced yet, but the expected price is from £49,000. All the changes inside and out are a significant upgrade for the Touareg, making it a true rival for its premium brand rivals.

“The Touareg's interior design is a big leap forward.” 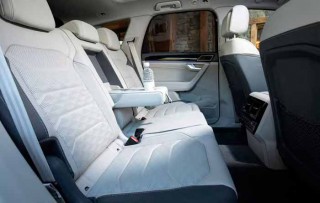 Verdict  Bigger, smarter and posher than its predecessor, the third generation Touareg is a class act, with a high-tech cabin and top-notch towing capability of 3.5-tonnes.

Sue has had a passion for cars since childhood, and learned to drive on Pendine beach aged 15. From a career starting in local newspapers, she zoomed into Fleet Street, and has been a motoring specialist on national newspapers, radio and TV, including a decade on Top Gear pre-Clarkson, although she never punched anyone.