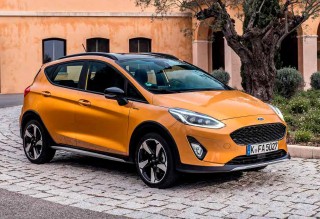 First Test 2019 Ford Fiesta Active. If you’ve failed to notice the rise in popularity of SUVs, then you must have had your head buried in the sand. Every car maker worth its salt has been looking at ways of lapping up demand for these chunkier vehicles and are even exploring new avenues. The Fiesta Active is a new addition to Ford’s range that combines its popular supermini with chunkier, SUV-inspired styling. As well as the beefier body addenda, the ride height has been raised by 18mm, too, to give the impression of a much more rugged, beefier vehicle. And while you might imagine this Fiesta would have four-wheel-drive, you would be wrong, as power is transmitted to the front wheels only. The track has been increased by 10mm, the steering and suspension have been finely tuned and there’s a mild amount of rough road capability, as well as the ability to choose from three driving modes.

But if you’re thinking that this formula might be familiar, you are of course right, because MG Rover previously introduced a similarly styled vehicle, all the way back in 2003. It was called the Streetwise and combined the 25 hatchback with rougher and tougher styling. It was followed by Volkswagen’s Polo Dune (named Polo Cross in Europe), and Citroën even put its corporate toe in the water with the C3 XTR. The demise of MG Rover in 2005 put pay to the Streetwise, and the Polo Dune and C3 XTR were both quietly dropped. So why does Ford think it can succeed where others have failed?

Bosses at the Blue Oval reckon that the rise in SUV and crossover popularity will result in a success story for the Fiesta Active and is so confident that it has already revealed Active versions of the Ka+ and Focus, with both models going on sale later this year.

But it’s the Fiesta that is first out of the traps and in diesel guise, comes with a choice of two 1.5-litre EcoBlue engines. The entry-level Active 1 features the 84bhp incarnation of the turbodiesel powerplant, while the better equipped Active B&O Play and Active X models have extra zip thanks to a variable geometry turbocharger-equipped 118bhp unit. At first glance, the Active is instantly recognisable thanks to the cladding around the wheelarches and bumpers, as well as unique 17-inch alloy wheels and roof rails. There’s metallic coloured scuff plates front and rear, and a bespoke rear bumper and grey infill between the rear light clusters.

The sports seats of the Active have been tested at Ford’s UK research and development centre in Dunton, Essex, and have undergone 60,000 test cycles to ensure that the chairs are resistant to wear and that the colours don’t fade when exposed to ultraviolet light. The chunky bolsters certainly hold you nicely in place when cornering, and the driving position is surprisingly spacious and multi-adjustable, despite the car’s compact exterior dimensions. The dashboard itself is furnished with soft-touch surfaces up top, but further down, and extending to the door cards, the materials become harder.

But it’s an attractive design, and has a real feeling of solidity, and though the tablet-like infotainment screen looks like an afterthought to some, we rather like it. The controls are logically placed in the main, though we reckon that the climate controls are positioned too far down the central stack, and would be more user friendly if they were placed higher. There’s a generous amount of storage, with a tray area in front of the gear lever, a deep compartment underneath the armrest, reasonable door pockets and a large glovebox.

Sat up front there’s a generous amount of leg and headroom, while at the back taller occupants may find that their hair brushes the headlining, though there’s more space in the rear than in the previous model Fiesta. There’s a few extra vital centimetres for rear legroom, and though you’ll be hard pushed to fit three adults across the rear bench seat, youngsters will be alright. With 311 litres of boot space with the seats in the upright position, it compares well to its peers. Fold the 60:40 split rear chairs down and it opens up to 1,093 litres, while a two-position boot floor allows you to store valuables out of sight. The 118bhp 1.5-litre TDCi unit is a gem, with super refinement, decent punch and an easy-going nature, while the six-speed manual gearbox is smooth, with nicely spaced ratios. Even with the accelerator pedal right to the floor, you’re unlikely to hear a peep out of the engine. Road, tyre and wind noise are similarly suppressed, making a highly refined and comfortable cruiser. Like other members of the Ford family, the Active’s handling is entertaining, with a lot of fun to be had behind the wheel.

It’ll turn in nicely, grip reassuringly and deliver a smile to the driver’s face. The steering is agile, accurate and highly manoeuvrable, especially in a crowded, town environment. And then there’s the suspension which has been set up to soak up everything that urban motoring can throw at it. It’s comfortable, well-judged and highly accomplished.

Verdict As great to drive as other members of the Ford range, all wrapped up in highly fashionable crossover clothing.

From an early age it was obvious that Ian’s career would have to involve something to do with cars. He started working on Diesel Car in 2007, and now not only edits the title, but also owns it too! He started his motoring career off well by passing his driving test just 63 days after his 17th birthday.

“Until recently, my favourite was the Leon FR 2.0 TDI with 181bhp engine and DSG gearbox, but for me, the Ateca FR surpasses that now.”