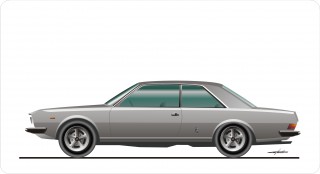 With the Fiat back on the road - I used it for the run to Goodwood for last month’s Alfa Spider cover story - and sporting its new gearbox, I resolved to get some of the niggles sorted. Brian Ingham of CBD Service Centre, just across the road from my Cirencester home, was happy to take a look at my list.

In his early days, Brian spent many happy hours servicing and rebuilding decaying Lancia Betas and Ford RS2000s, having served his appren-ticeship at Sam’s Speed Tuning in Collyhurst. The boss was an Iranian who had worked in the Shah’s garage and came to the UK in ’79 after he was deposed, when having that job on your CV can’t have been healthy.

Ingham remembers Mercedes-Benz 600s turning up for service “full of sand” and has vivid recollections of one of the seven right-hand-drive Ferrari Daytona Spiders arriving one day, dismantled to its main components. He was tasked with machining a new part for the clutch mechanism and recalls a wild ride down Ashton Old Road: “I had to hold the door shut because the locks weren’t fitted and I didn’t have a seat; member getting fired almost into the boot when the boss put his foot down.”

The exhaust has always rattled against the body on the Fiat and, with the new gearbox mountings, this noise has assumed unbearable proportions. Brian re-drilled and moved the gearbox mounting plate, which has hopefully done the trick. I was conscious that the rear pads sounded as if they were metal-to- metal on the run to Goodwood, so I found some new ones on eBay. This turned into a right palaver: they were wrong, as was the next set I ordered, and in the end Brian had my originals re-shod. Can anyone throw light on what other car they fit, for future reference?

He also freed off the front brakes and popped on the set of pads I already had in the boot and hadn’t got around to fitting; freed off the handbrake; and changed the dark brown and ancient brake fluid. I’m now looking forward to some improved stopping power.

The interior doorhandles are notoriously fragile on Fiat 130 Coupe, so I found enough remnants of part-dismantled items for Brian to make up a complete good one and fit it on the passenger side. The door lock/catch itself was worn, too - and there is no adjustment on it, really - so I found a better one in my cache of 130 parts, which Brian is fitting as I write.

He has also replaced various bulbs and rebuilt the innards of the nearside-front wing repeater. The final job on the list is the electric aerial, so that I can listen to Radio 4 again, rather than Tom Jones’ Greatest Hits on an 8-Track loop.