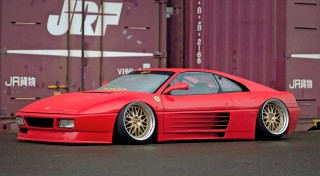 I’ve always been into the stance scene and love slamming cars down to the ground. I also have a deep love for classics and always wanted an older Ferrari. So, when the opportunity showed itself, I took both of my loves and put them together!” Such a simple and to-the-point reasoning had left me dumbfounded and yet, it put the biggest smile on my face. Ginpei Yamaguchi is the man behind this, what I’m sure to be a one-of-a-kind, Ferrari 348 Targa.

To understand why Ginpei-San would decide to take one of these Pininfarina-designed stallions and customise it to the point that a lot of purists would have nightmares, you first have to know a little about Ginpei-San. A 27-year old businessman that owns his own garage in the small city of Kitami he has been into the drift and stance scene ever since he could legally drive - maybe even a little before (ah, we’ve got you Ron - nudge, nudge – Midge). As his shop began to grow and become more successful, he began buying a wide variety of cars to play with. Silvias, JZXs, Supras and other RWD monsters he could throw sideways around the tracks and countryside touges. His taste also included indulging in the finer things in life, sought-after classics such as 1st generation Toyota Celicas and a host of air cooled 911s. Ginpei-San still has quite the collection but I was here for one car and one car only - his crazy Ferrari 348. 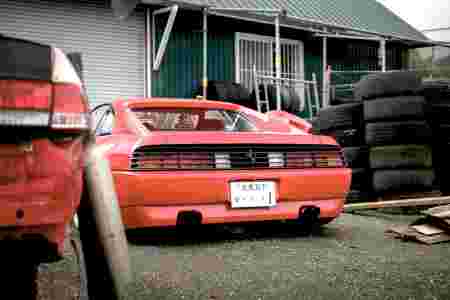 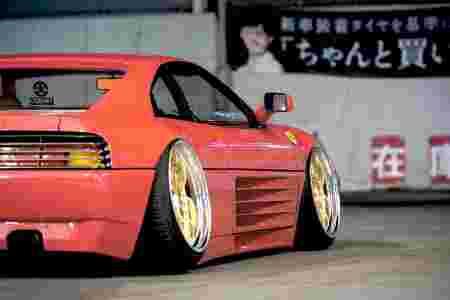 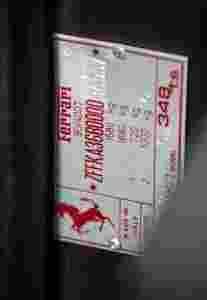 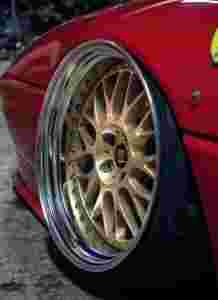 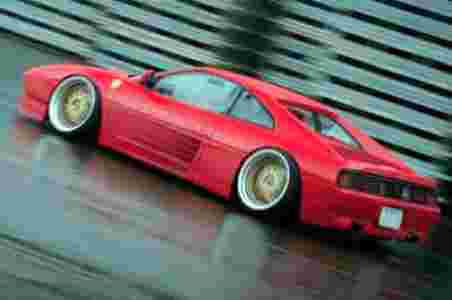 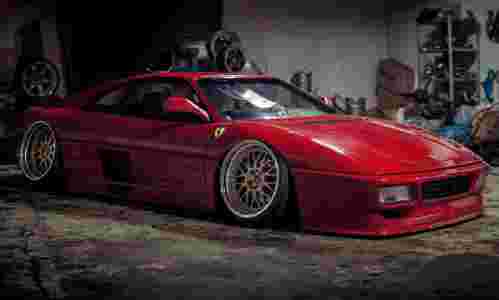 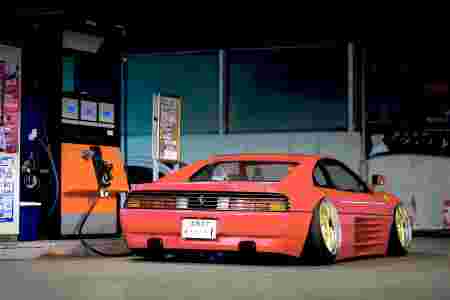 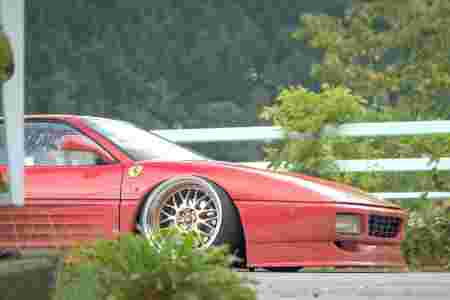 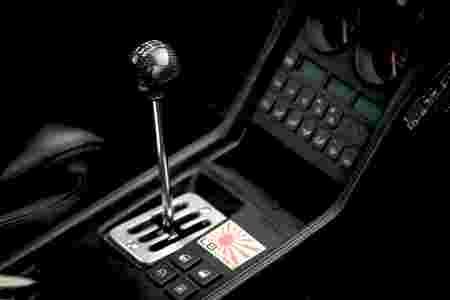 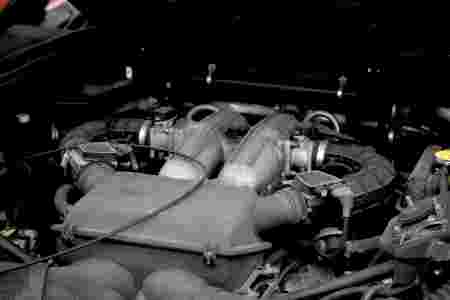 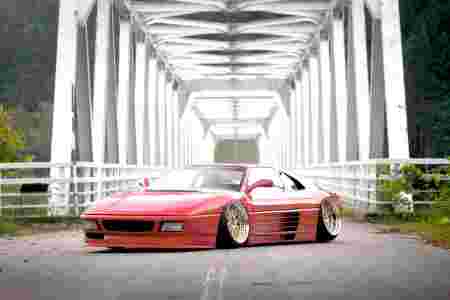 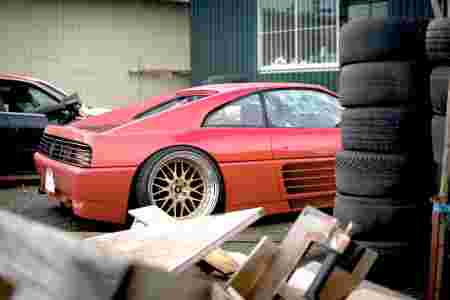 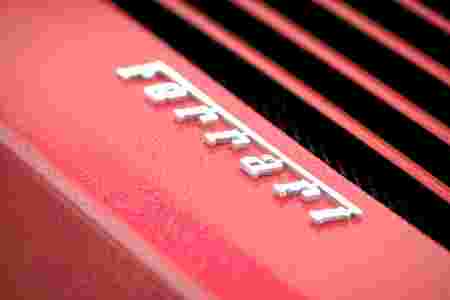 Well, you certainly have to give Ginpei-San ten out of ten for bravery! The Ed’s Wildcard gives us the chance to feature those off-the-wall vehicles you may not normally see in Retro Cars. This month we take a look at a bona fi de Italian thoroughbred, although this one’s been built in deepest darkest Japan. Suffice to say it’s quite the internet celebrity…

As long as Ginpei-San can remember, he has always loved Ferraris and wanted to add one to his stable. However it had to be an older model. The newer cars, as nice as they are, are full of technology and computer aids to help the driver achieve faster lap times. “It’s basically like playing a videogame or using a computer. If I’m driving a car, I want to be driving the car. Not just along for the ride.” Thus when the opportunity arose to purchase this 348, he immediately jumped on it. It wasn’t before he couldn’t stand the 348 being stock though, and that’s when modding bug went a little wild.

The first thing to go was the standard exhaust system. What Ginpei-San had in mind was something a bit louder… actually quite a lot louder. Having his own garage, fabricating a one-off system wasn’t a problem. This custom item was soon fitted and allows the 3.4-litre V8 to breathe, creating more than a few noises along the way. Below 3,000 rpm, the V8 releases a growl that’s aggressive but still remains civilised. At 4,000 rpm, the civilities stop and the gates of hell begin to open. Then, from 5,000 rpm, all hell breaks loose and assaults you with ear-piercing, F1-like screams. Of course, having a car this loud doesn’t please the neighbours much, nor the local police, which is why he’s now fabricated a silencer system to try and tame the beast somewhat. Then again there’s only so much you can do, right? Apparently a combination of early shifting and staying below 3,000 rpm yields the most socially-thoughtful results.

With the exhaust system sorted, it was time to slam it. As I said, Ginpei-San loves the stance scene so the stock ride height would never quite cut it. With aftermarket suspension for the 348 being virtually nonexistent in Japan, he decided to simply chop the springs, an action he immediately regretted as his relatively comfortable ride instantly turned to garbage. “The car became very unstable and was painful to drive.” With his old drift JZX laying around in bits, he came up with the brilliant idea of adapting his race coilovers to make them work on the Ferrari chassis. Thinking it was only a temporary fix I asked how long he rode around with the old JZX setup. “For about two years.” He laughed. “It was so much better than the cut springs that I didn’t mind it. I also wanted to work on a different project so I left it alone until last December.”

This other project that Ginpei-San had in mind was widening the rear fenders to fi t his 19-inch Work wheels. These rims are incredibly popular on the drift scene and Ginpei-San loved running them on his race cars. In fact, he loved them so much that he’s owned 5 sets of them, all at the same time!

The 10-inch wide front wheels fit pretty well from the outset but the 12.5-inchers in the rear were a different story. Running such aggressive offsets, some body-fettling was going to be necessary but Ginpei-San didn’t want to ruin the Ferrari’s styling. Therefore (after thinking about it for about a year) he plucked up the courage, along with some serious funds, and took his 348 to a local custom shop. The fate of the operation then lay solely in the skills and experience of his friend who owned the place. Just how brave is that? With nothing but masking tape and a sharpy, the fender was prepped to be cut into multiple sections. They would then place the VS-XX wheels on the car and see how much they would need to ‘adjust’ by beating the hell out of ‘em until they “looked about right”. “The finders are widened about 2 cm... ish,” said Ginpei laughing as he demonstrated how they banged them into place. With the first fender finally fitting nicely around the wheel, they moved onto the second, now armed with rough measurements and a visual idea. The entire process of hacking and banging the wings to completion took about 5 months. But, as reckless as it sounds, the final result is what counts. It’s simply breathtaking.

While the fenders were under the knife - or hacksaw to be more accurate - Ginpei-San decided it was the perfect time to get rid of the JZX suspension system and fabricate something new. Working with limited space, the prospect of putting together an air ride system seemed out of the question. Having less components to worry about and being able to work within the space limits of the 348, Ginpei-San decided hydraulics were the only way forward. The result of course, is that this 348 is low. It’s so low in fact, that when the rams are compressed fully, the subframe that protects the engine and transmission is no more than a few millimetres from kissing the ground. When lifted to what he calls a “usable ride height” it still requires a constant avoidance of anything that resembles a dip or bump. His reward for the smallest lapse in concentration is the unforgivable sound of the sump smacking into the tarmac.

Driving around in Ginpei-San’s Ferrari 348 though, is like being some sort of rock star. Everywhere we went, people would stop in their tracks and stare. Some would give the thumbs-up, others would scream with delight. Okay, yes, the ride is awful. It’s also hopelessly loud (even with the silencers) and no matter how many days I spend riding around in it, I could never get use to the scraping.

But does any of that matter? Of course it doesn’t. This is a supercar that’s simply more super than most. Besides, when was a Ferrari ever meant to be practical on the road? I’ve never had so much fun and what is the point of any supercar but to have fun? They’re all flawed in one way or another but what’s important is that they put a massive grin on your face, not to mention the faces of any unsuspecting onlookers. Say what you want about how this Italian icon is modified but it raises as many smiles as it does eyebrows. For that reason I can’t help but love it.