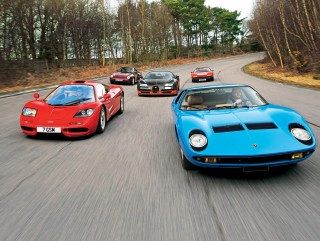 Each decade has its superhero who outshine all other contemporaries. An encounter with the sportscar milestones from the 1960s to 2000s

Some cars rob easy breath. For many it is the sculptural E-Type, which arouses irresistible desire in others rather brutal Cobra or the eternal Porsche 911. Already in the 1960s there were cars that were something specific particularly well. Accelerating, for example. To look good. To make curves. Or supple feathers. The combination, however, from breathtaking design, stunning performance, handling and symphonic sound was few and far between. 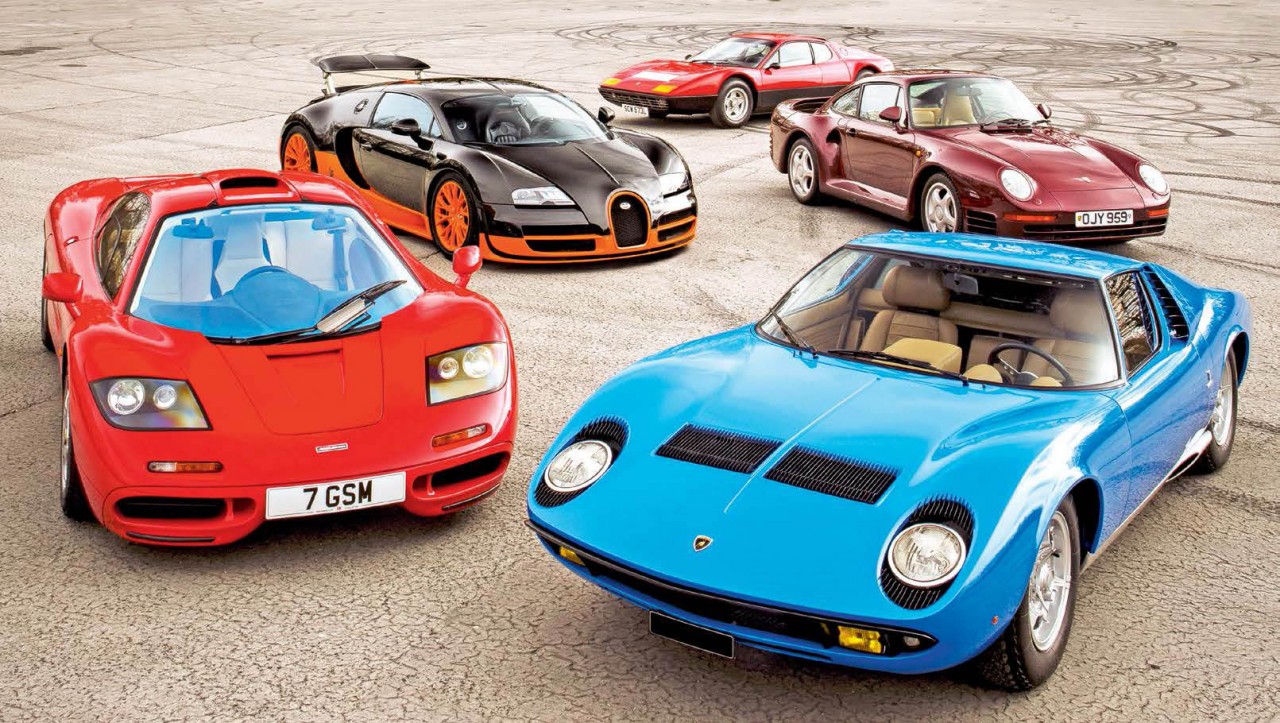 Such big breakthrough came with the Lamborghini Miura. At the Turin Motor Show of 1965, they moved him the sheet from only 1.05 meters flat body. The epochal form of Marcello Gandini who folding headlights with their feminine lashes, the transversely mounted V12 mid-engine - quickly made the term "supercar" the round. The Miura was by 350 GT and 400 GT Lamborghini the third and the first with a real name - that of a bull breeder.

From Antonio Miura stable once came Murciélago, the anno 1879 survived all 24 Lanz shocks in a bullfight and then was pardoned. The legend of the strength and stamina Murciélagos - and not least his own Zodiac - had Ferruccio Lamborghini (1916-1993) inspired by the company was founded in 1963 to horned brand logo. In addition, an angry bull is stronger than a jumping horse ...

But he is also faster? With its 350 hp, the Miura was the contemporary Ferrari "Daytona" straight anyway loosely hold a candle, in curvy turf he drove the front engine Gran Turismo then smooth it.

And as a Miura feels today? Now, you sit in a frog position and looks forward through the huge glass pane on the curved fenders and black louvres. To the rear you see almost nothing except the transverse engine, including the linkage of the throttle. But why should you also look back at the fastest car of the 60s?

The Miura has to be earned, as was customary in the old servo-less time. The circuit will be conducted carefully, downshifting to second gear is only possible with a lot of feeling and declutching, the flat stationary steering is because of shapeless seats a little to support.

The handling, however still impressed: Very neutral, accurate and above all surprisingly fast can the Miura conduct. However, the untenrum something tough V12 requires upscale speeds when it shall go afloat.

We to rise into the 70s. The mid-engine revenge from Maranello came late, long the Commendatore held in its road cars on front engine. Here Ferrari had already retracted with the mid-engined Type 250 LM at Le Mans with great success. 1973 was finally time: The serial production of the 365 GT4 Berlinetta Boxer, in short: BB, ran on. With its 4.4-liter twelve-cylinder is by no means a boxer engine, but a 180 ° - V-engine. He builds low center of gravity and flat rests along the tubular frame, with the gear aft - unlike the Miura So in the classic mid-engine layout. About the chassis you clapped a composite body in steel, aluminum and plastic mix. We turn the petrol pumps, contact a few times by the gas and start the engine. All twelve pots in turn hold the work on the first minute of coughs V12 still throat free, then he is awake and clear.

The coupling requires a trained calf, but does not abruptly, the switch lever klickert through the open gear lever gate. At low revs slightly out of round drumming, is changing the sound in the mid-speed range to dark rumblings to finally trumpets turbine-like light on the 7000er- brand. Acceleration is still impressive in handling but you feel that despite targeted lightweight design not very low weight of one and a half tons.

We morph into the '80s. This jump is much eminent than the similarly designed from the 60s to the '70s, from the Miura to BB. Because the turbo era has dawned. conceived in 1982 as rally car to Group B regulations, the Porsche 959 came in 1986 in homeopathic doses on the street.

In addition to the turbocharged four-wheel-concept of 959 is another novelty brought in the Supersport division: everyday suitability. Getting in, turn the key, go - and arrive. A hitherto not self-evident feature of the often very fickle fair-weather companion. Whether a 959 is pretty?

That's in the eye of the beholder. Anyway, he does not even try to hide its origin. The little Greenhouse with steep windshield reveals the 911-based and does not quite fit the modern substructure. The aerodynamics cares not, the drag coefficient is good 0.31.

The increasing importance of aerodynamics is proposing the bridge into the 90s. But where are all the spoilers that would have such a fast car like the McLaren F1 anyway? Now, its sophisticated form comes from without, air ducting and underbody generate enough downforce and keep the drag coefficient 0.32 still low. Power its 6.1-liter V12-sucker of BMW penetrates the F1 so in entirely new speed areas: A prototype with probably stray more upward performance reached in 1991 to phenomenal in E391 kmh, the later "train cars" are hardly slower at 370 kmh.

The experience of McLaren in Formula 1 can already be seen on the central driving position of the three-seater - view and driveability are identical as in laws as left turns. If you ever entrains passengers, then the best two so as not to ruin the weight balance ... If we look back to the Porsche 959, the McLaren seems to interrupt the evolution because it is neither charged nor all-wheel drive.

But its owner - by the way the only one who moved his super sports car to our meeting on their own wheels - nevertheless considers it perfectly. This perfection he likes to be free times 6000 euros for an oil change, the annual maintenance for an F1 amounts to around EUR 25 000. Hardly less likely a Bugatti Veyron devour per year. He is the automobile climax 2000s, a demonstration of technical feasibility. Regular 1001 HP strong, he makes in the direction occurred here super sport version fearsome 1200 hp. In he presented in June 2010 at 431 kmh was new speed record for street-legal cars that series, however, is limited to 415 kmh.

Again, the aerodynamics of the sticking point: it can be in various modes between the two extremes circuit (maximum output) and Max-Speed (the lowest possible air resistance) adapt. But the most striking in the Veyron is its high everyday practicality: He drives handy, easy and comfortable to - almost like a Golf.

The meeting of the Supercar highlights of the past five decades was a feast for the senses. The progress manifests itself in addition to the increasing performance especially in better suitability for everyday use and the growing importance of aerodynamics. Has probably never seen a wind tunnel inside a Miura, so today is in this segment nothing without active aero parts, which adapt to the driving conditions.

The pictures are in the box, which exhausts crackle comfortably to himself. Only the Bugatti has not been enough and wags aggressive with the rear spoiler.

So goes supercar in the new millennium: big, heavy and full electronic helpers. However, the above-ground performance give developers quite.

What does a McLaren F1 with the VW Beetle in common? Properly that both pedals. The performance of a Beetle engine brings in McLaren already the starter. The driver sits centrally - good for visibility and weight balance.

Whoever opens the rearmost door, sees a nice collection of motorcycle silencers. The 6.1-liter V12-sucker from BMW sitting along in front, under another flap.

Welcome to the turbo era: 500 Nm and 450 hp from just over 2.8 liters - which are still official values. In the '80s which was considered above ground.

In keeping with the exterior, the cockpit is all dressed in black and red. Even air conditioning is on board.

The 3.9-liter V12 sits transversely behind the passengers, the transmission tinkers under the engine. The noise inside is accordingly considerable. Folding headlights with sexy eyelashes.

The tastefully arranged leather landscape with the open, smooth shifting gate comforting about the lousy ergonomics away, forcing the driver into a kind of frog position.