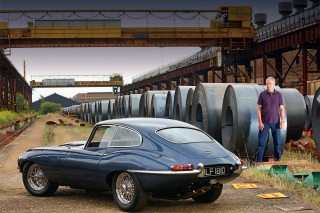 You’d never know that there was a Ford Ka roof panel where the Webasto used to be. Or that the owner who restored this E-type was learning all the way. A solid grounding in engineering – his company made irrigation systems – and a previous life as a mechanic with the McLaren Formula One team helped. That was back in the day when F1 spanner men were jacks of all trades who could tackle everything and a team of only six looked after two cars. 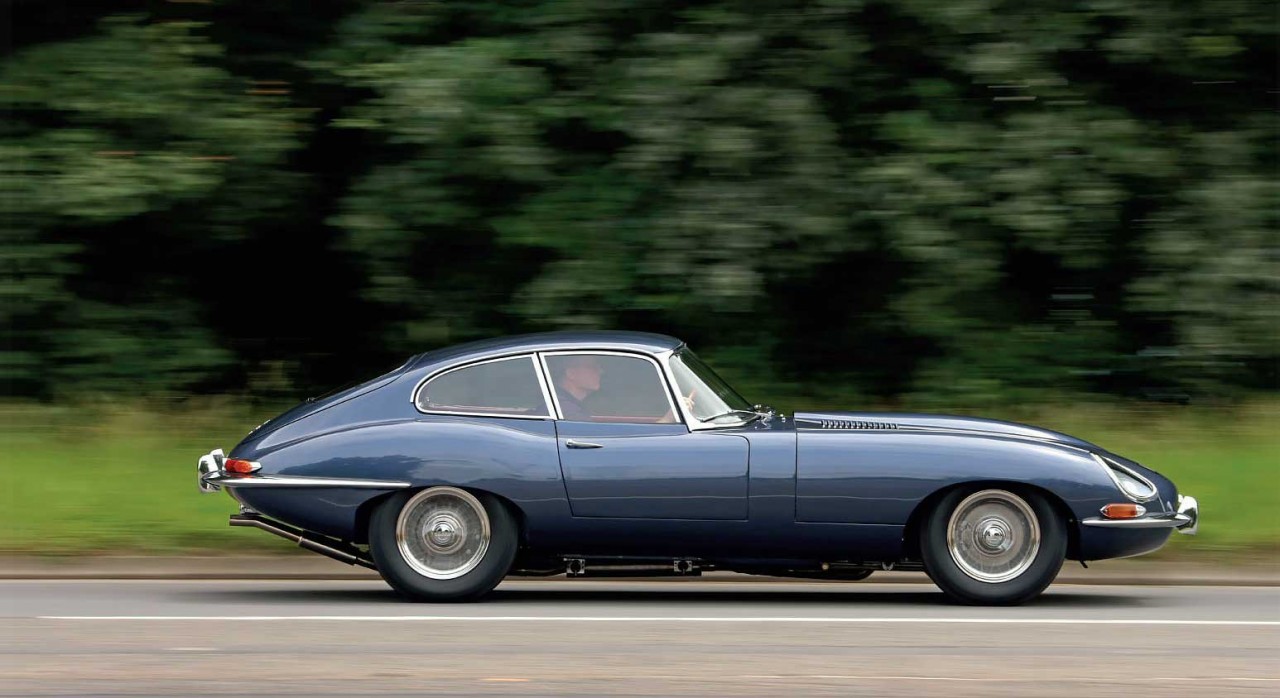 Steve Bunn bought the S1 4.2 as a driver-quality car in 2001 – and then quickly found that it wasn’t as nice as he’d thought, especially under the skin: “The sills were in two pieces, for example, and it was metallic black, which Jaguar never offered.” When he sold his business in 2006 and retired, the E-type went into storage: “But I knew that I was going to have to restore it.”

The process started in 2010 and, inevitably, the rot was worse than it first appeared. A lot of new metal was needed, including floors, rear quarters, inner rear arches, one complete rear wing and half of the other. It also needed both outer sills, one inner plus the strengthening pieces inside – and that roof infill to return the coupé to its pure teardrop shape.

“I’d been driving along and realised that all cars have a compound curve in the roof, so it was just a case of measuring up the size of patch that I needed and then going around the scrapyards until I found something that matched. I was quite pleased that a Ka fitted the bill because at the time Ford owned Jaguar.” The panel was joddled then held in with 50 or 60 spotwelds, in two rows to reduce distortion: “Luckily I could reach in through the windows with the welder.

Below, from top: 4.2-litre XK powerplant replaced the original 3.8 in 1964; beautifully trimmed cabin; it took three attempts before Bunn was happy with the headlining; pretty cowled headlights on S1. 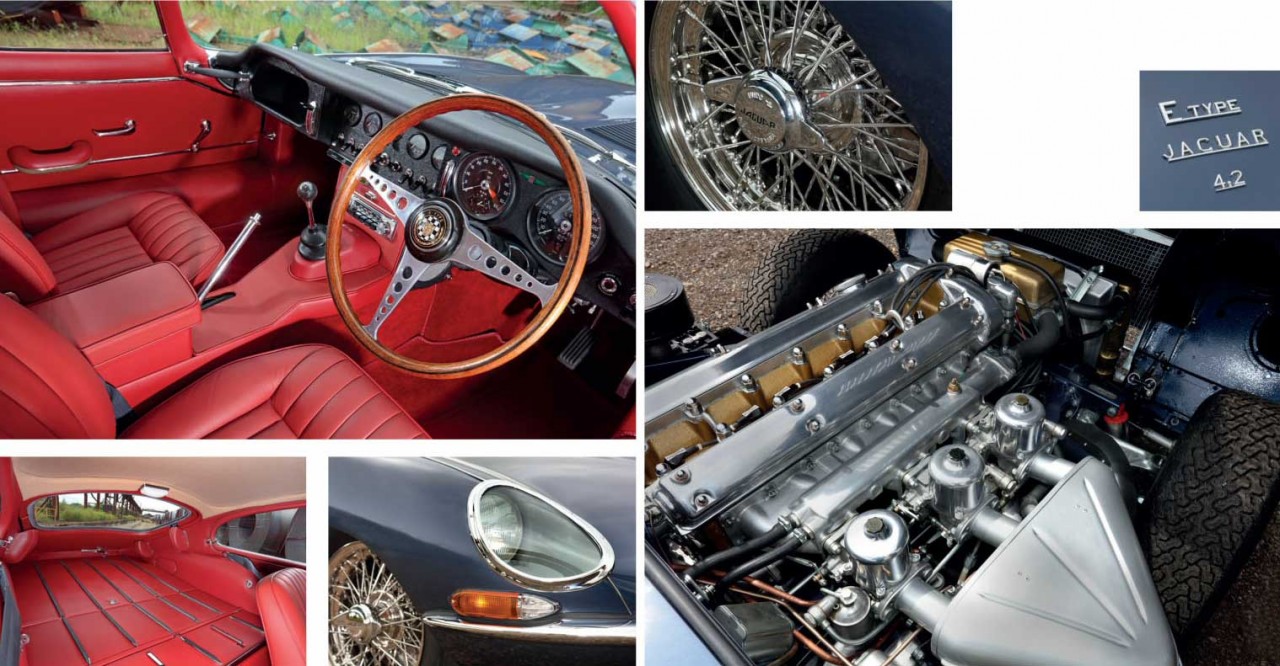 From main: dark blue is unforgiving, but there are no obvious flaws; chromed wires are fitted with wider rubber than standard; Bunn decided on natural finish for brass coolant tank – some cars were supplied that way.

“People have said ‘you know that it’s the hardest car to restore,’ but it’s what I had, and it didn’t occur tomethat I couldn’t do it. That said, once I got the body back from stripping I thought I’d better do that first in case I couldn’t manage it. It was tempting to do some of the easy stuff first, though, such as rebuilding the rear axle. When I went to collect the shell, the firm that had stripped it said: ‘Don’t be alarmed by what you’re left with. We’ve seen worse.’ They did also let on, though, Thatsomecustomers are so dismayed that they ask them to scrap what’s left after dipping.”

Removing the paint, filler and rot uncovered a multitude of older repairs, so it was out with the grinder and snips. A home-made rotisserie helped – aka one scaffold tube and two welded angle-iron tripods. Bunn also welded bracing inside the door shuts to hold the structure straight while the sills and rear quarters were off.

Not all at the same time, of course. The new panels were fitted up, then held in place with aircraft-style fasteners while he welded them on. He says: “The panels came from Martin Robey, and most of the other bits I got from SNG Barratt – largely because their website was the easiest to navigate. The hardest bit was getting the gaps right. I wanted it all metal, not filler. I was lucky with one door, but the other was a bit tight so I had to unfold it and try again – luckily the metal didn’t split, and because it needed to be smaller it didn’t leave a ripple in the skin. I did end up with a bit of filler in it, though. They were leaded originally and I tried using that, but couldn’t get on with it.” 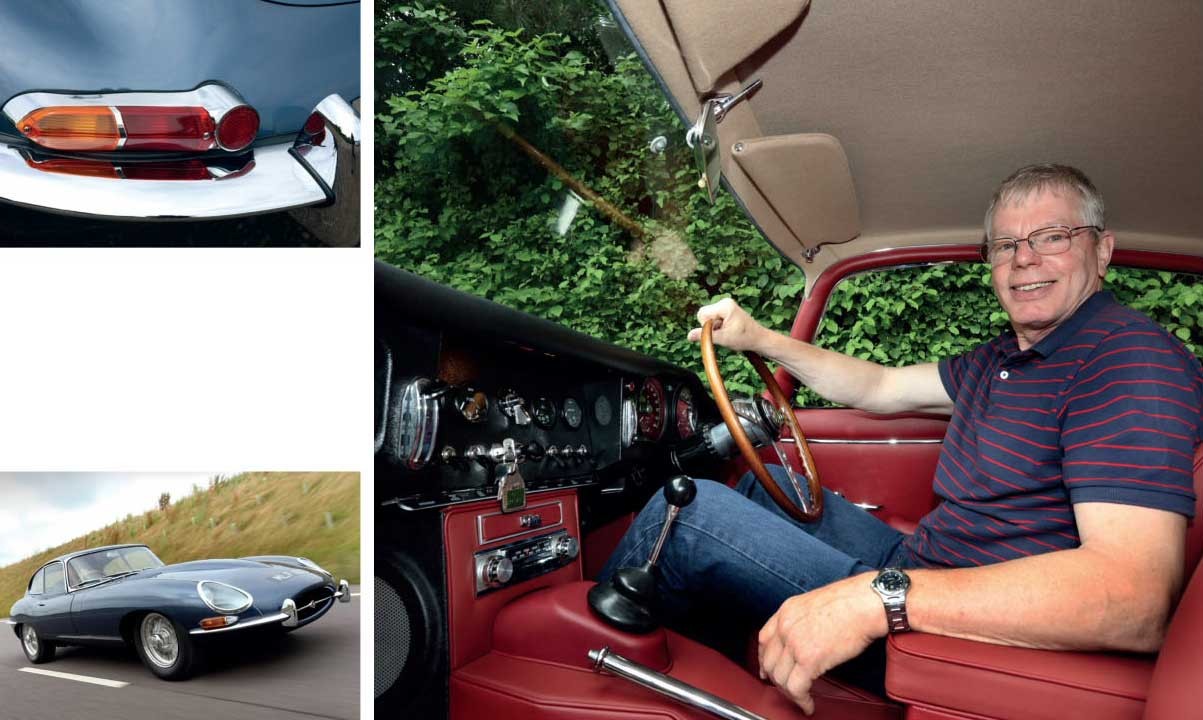 Clockwise: Bunn’s Work in progress background helped him get the finish he wanted; E-type looks just right on Blockley rubber; the brightwork is perfect.

To support the body during the build, and to transport it to the paint shop, Bunn made a pair of dollies – one for the main shell and one for the front-end panels: “To paint the underside of the bonnet, it was bolted to the dolly to allow it to hinge up as it does on the car. The body was transferred to the rotating jig once it was at the paint shop, to allow access to all areas.”

All of the machining work was contracted out, but Bunn rebuilt the engine at home. An electric fan is the only deviation from standard spec, although the wishbones are nickel-plated – since E-types were being built, cadmium has been outlawed by the ’elf an’ safety brigade. Bunn did the electrics himself, with the help of a wiring diagram and a multimeter.

“The interior was made by MCT Jaguar Restorations in Nuneaton, including recovering the seats,” he says. “I fitted it all, including the headlining – which I had to do three times. They only just fit and the first time there was a small gap at the back. The second time there was still a little gap at the back, but on the third it was just right. Each time you repeat it means a day on your back, scraping off all the old glue.”

The paintwork was by Dean Aldridge at Shire Lodge Autos in Corby, and the front subframe is correctly finished in body colour: “It was originally light opalescent blue but I saw an Eagle E-type in this shade with a red interior. I called the sprayer and said: ‘Don’t order any paint yet!’”

It was the right call – the Malcolm Sayer inspired shape looks gorgeous in this dark blue. The body is dead straight, with profiles and contours lining up, witnessed by the consistent reflection lines. You need to be confident in your work to paint a car with this many compound curves a dark colour and then let a photographer loose with it on a bright day, but the result speaks for itself. Bunn, ever the perfectionist, can see afew bits that he’s not completely happy with, but then most E-types probably had a few wrinkles even fresh from the factory. I’d wager it’s better than when it was new.

It sits just right on slightly wider rubber than standard – 205/70R15, as used on the XJ6 S1 – on 6in rims, the rear suspension tightly bunched under those taut haunches: “The coupé is just a nicer shape – I wouldn’t swap it for a convertible. Aston Martins are worth so much more, but I tried a DB5 and found the gearchange a bit truck-like. The E-type is just nicer to drive. But everything that was good about the S1, Jaguar did away with on the S2 with the open lights and the big tail-lights under the bumper.

“It’s taken six years, and about 4500 hours – but in that time my sons have moved out and got their own flats that have needed decorating. And I know to the penny what it cost. I had a budget of £32,500, on top of the £24,000 that the car cost me in 2001.” That means Steve is comfortably ahead on his investment, which is very rare – paying for a professional restoration almost always puts the owner underwater compared with the car’s finished value.

Apart from the paint and engine machining, the work was all done at home. A well-equipped double garage made life easier, as did TIG,MIG and spot welders, lots of axle stands and a large compressor, but was there any one tool that was essential? “You need a good bench – you can’t start a job without one – and, of course, for body restoration a welder is essential. But I reckon that a grinder is one of the most versatile tools – you can cut with a metal disc, or put a linisher on it for finishing. The other thing that I learnt was to do one piece at a time, and to get it completed before you move on to the next thing.”

Look a little harder and the penny begins to drop. This is no average home restorer. One of the tool chests is a monogrammed period Metal Box item dating from Bunn’s mechanic days that bears the chassis plate from McLaren M23-8. Then there’s one of Denny Hulme’s steering wheels hanging on the wall. In the office inside is a framed photograph of Bunn and his crew changing wheels on Jochen Mass’ car (the spare) during a pitstop at the 1976 British Grand Prix.

“I did metalwork in my last year at school, so decided to do an apprenticeship,” he explains. “I was accepted at Marconi Instruments in Stevenage on a four-year term. I built a beach buggy in my spare time, which I drove for about four years without a hood.

“I joined McLaren in 1972 after a visit to look around the factory. At the end of the tour I asked how to get a job there, and was told to send my CV. I did that, and was asked to start as a lathe operator. After four months of working the lathe during the day and helping to fabricate M23 chassis into the evening, I was given the fabrication job full time. I worked at McLaren for eight years and loved every second: three years on the race team, winning World Championships in 1974 with Emerson Fittipaldi and 1976 with James Hunt. Even the time I worked 36 hours non-stop to make and deliver a rear wing to the German GP. Or the two hours trying to explain to David Niven at Monaco how the race was unfolding and that we were not going to win.

“I’d never restored a car before but when I got started I loved it. Certainly, my background allowed me to do it. Now I want to do another project, but I can’t leave the Jag outside and I don’t want to put it in storage. I was talking about selling it, but my sons say I can’t. Next is my XKR, which has been neglected while I did this. But I would like to do an E-type again in the future – I’ve learned so much about them.”

Thanks to Everyone at Tata Steel Corby

‘WHEN I COLLECTED THE SHELL, THE FIRM THAT STRIPPED IT TOLD ME NOT TO BE ALARMED’