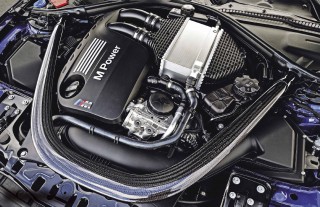 We take a look at the inner workings of the twin-turbo S55 to see what makes it tick and how you can get the most from it. Words: Elizabeth de Latour. Photos: BMW, Evolutionized Photography.

The S55 was introduced in 2014 in both the F80 M3 and F82 M4 models and is based on the single-turbo N55, albeit with a raft of changes on board. Since its launch it has found its way into the F87 M2 Competition in a slightly de-tuned form and in slightly higher states of tune in the Competition and CS versions of the M3 and M4, with the hottest version fitted in the M4 GTS.

After almost 30 years of high-revving, naturally aspirated engines spread across four generations of M3, with fours, sixes and eights found beneath their bonnets, the move to turbocharged power for the F8x generation of M3 and M4 was never going to be a popular one but it was inevitable and very much a sign of the times. Spare a thought for both BMW and the S55 – the company and its new engine had an almost impossible act to follow, that being the mighty S65 V8, and enthusiasts were lining up to hate on whatever would emerge from BMW M’s labs, so there was a huge amount of pressure to impress and perform.

The S55 that emerged may not have seemed all that impressive upon first glance, seeing as it was based on the much-used N55 that had featured in numerous BMWs, but more than a moment of research revealed just how much work BMW had put in beneath the surface, with 75% of the components coming from the N55 and the remaining 25% having been developed specifically for the S55.

At 84mm and 89.6mm, the bore and stroke are the same as those of the non-M engine giving the S55 the same capacity, but BMW M chose to employ twin turbos as in the earlier N54, as opposed to the single turbo arrangement of the N55, and they are unique to the S55, with a lightweight design and electric wastegates. Rather than going for a huge increase in power, BMW chose to employ a lightweight philosophy for the M3 and M4, managing to save weight over the smaller outgoing model to improve performance and utilising the turbocharged engine’s monster torque rather than opting for a huge increase in power. The S55 makes just 11hp more than the S65, though it is produced much lower down the rev range between 5500-7300rpm, making it more accessible. The move to forced induction did mean that the S55 is rather better endowed than the S65 in the torque department – where the naturally aspirated V8 had to make do with 295lb ft, the same as the N55, the twin-turbo S55 develops a meaty 406lb ft from 1850-5500rpm, giving it some monster mid-range punch. The engine also employs direct injection, Valvetronic, double Vanos and uses a closed-deck crankcase design, which increases rigidity and allows cylinder pressure to be increased for maximum power. Instead of cylinder liners, the cylinder bores of the S55 feature a twin wire arc-sprayed coating, which helps to reduce engine weight and there’s a forged, torsionally-rigid crankshaft, which both increases torque-carrying capacity but is also lighter and its reduced rotating mass improves throttle response and acceleration.

The S55 features a high-performance cooling system, with a large chargecooler with additional radiators for the water circuits, turbocharger and transmission oil while an electric coolant pump cools the turbos when you turn the engine off. The S55 also employs a lightweight magnesium sump that features a special cover to limit the movement of the oil under extreme cornering, and during heavy acceleration and deceleration an oil extraction pump and sophisticated oil return system located close to the turbocharger help to maintain uninterrupted oil circulation. The exhaust system uses an electronically-controlled flap arrangement located just before the rear silencer that reduces back pressure and gives the engine a soundtrack befitting an M car. The increase in power for both the Competition and CS versions of the M3 and M4 come courtesy of a remap, but for the M4 GTS BMW added water injection, which in turn allowed boost pressure to be increased thus making more power. The icing on the S55 cake is the huge increase in efficiency over the S65 – mated to the DCT gearbox, the S55 puts out just 194g/km of CO2 and can return 34mpg on the combined cycle, making it an exceptionally economical engine for its power output.

It did not take long for the aftermarket to get stuck into working on the S55 and it has proven itself to be an exceptional engine when it comes to modding. Your first step is going to be sorting out the S55’s software, be that with a tuning box or a remap. With a JB4 on board you can expect to see around 480hp with a similar level of torque with minimal effort, making it outrageous value for money, while a remap will potentially give you a little more power to play with, perhaps 500hp or so. The next key areas to upgrade will be the downpipes, chargecooler and the turbos themselves. Downpipes will either be cat-less or equipped with sport cats – the former will give you more power but won’t get you through an MOT whereas the latter will be more expensive due to the inclusion of cats and won’t net you as much power, so the choice is yours. Either way, by removing that massive restriction right after the turbos your exhaust flow will increase significantly and not only will you only get more noise and improved throttle response, you will also get more power and you can expect an additional 20-30hp and a similar amount of torque over just software alone.

Charge pipes are also worth looking at – they are unlikely to give you much in the way of gains, but once boost and power start to rise the stock plastic items will be at risk of breaking and aftermarket ones won’t have any choke points, so should aid in improving performance. Once power increases, cooling will start to become an issue so you’ll want to make sure your S55 can keep intake temps nice and low in order for you to be able to actually take advantage of all your performance mods. Our pick would be CSF’s uprated chargecooler, which gives a massive 60% increase in core size over the stock cooler, and can be paired with the company’s front-mount heat exchanger, which features a 26.9% larger frontal area, thicker core and taller fins as well as a dual-pass design for the lowest possible outlet temperature. If you’re serious about maximum performance from your S55, it’s an awesome upgrade.

Finally, we come to the turbos themselves, the most expensive upgrade on your shopping list, but also the one that will take your S55 to the next level. There are plenty of options out there like, for example, Mosselman’s upgraded turbos, which have different frames and larger compressor and turbine wheels for greater flow and, when paired with the supporting mods that make up the rest of the MSL620 package, they help to make a massive 620hp. Finally we should mention intakes and exhausts; neither will give you the same sort of gains as any of the aforementioned mods, but they can add a bit of power. Dinan’s carbon fibre cold intake, for example, when paired with software can give peak gains of 14hp and 21lb ft of torque. Exhausts will give you more noise but some, like Akrapovic’s full Evolution-Line system, can add a few extra horsepower, though you’re unlikely to feel the difference.