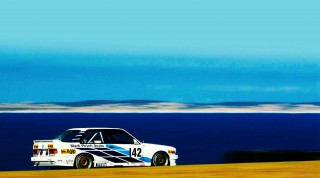 It’s a fairly simple recipe: take over 500 of the world’s best classic and historic racing cars, give them the run of a famous race track, throw in some excellent static displays, and allow the public access to everything for a very reasonable sum. The end result – the Phillip Island Classic Festival of Motorsport – is an event Australian racing legend John Bowe (two-times Bathurst 1000 winner and champion in multiple other categories) calls “the best weekend of motorsport in the world”.

Now, some might think that a big call, but the hard work the Victorian Historic Racing Register (VHRR) puts in each year, along with the dedication of the other volunteers, means that Classic is always impeccably run and very welcoming. Combine that with the incredible seaside views and sheer speed Phillip Island provides, and it’s no wonder people travel from interstate and even overseas to attend. Key examples of this dedication this year included Brits Andrew and Margaret Wareing, who shipped their ex-Hill, Ginther and Stewart BRM 216 and ex-Jones Williams FW06 over, Lilo Zicron in one of three USbased Lola T70s, several New Zealand F5000s (creating the biggest field in Australia in decades), the famous turquoise ‘Gotcha’ E-Type and a McLaren M8F, piloted by German Rhea Stauffer and Brit Andy Newall, respectively.

Of course, for BMW fans, the most exciting news was the impressive line-up of Bavarian metal, as the Classic was the first international event after the brand’s 100th birthday, and many cars, both racing and on static display, came along specifically to help celebrate the occasion.

The headline act was definitely the largest ever group of JPS cars assembled in one place, thanks to five Group A E30 M3s (six if you count the ex-JPS Mobil 1 entry), two Group A E30 325is, four Group C 635CSis, including patron of the meeting Jim Richards’ dual Australian Touring Car Championship-winning example and his wide-body Group C model, and five road car JPS special editions turning up. Of the racers, all bar two of the E30s and two of the 635s competed as well, giving fans the chance to see and hear these legendary machines in action.

Above: JPS racers at rest with Benson and Hedges M3 This image: Ex-Alan Jones Williams FW06.

The M1 from the Bowden Collection was the star of the weekend Right: Wonderful Group 5 E21 and E30 M3.

There was a superb collection of BMW road cars in attendance and the BMW Car Club of Victoria rightly won the best club display.

All the black and gold legends were joined on track by even more classic BMW racers, with three other Group A M3s (a Warsteiner Schnitzer, a Mark Petsch car from NZ and the ex-JTCC Asahi Kiko Evo), two 2002s in the Historic Touring Cars Under 3.0-litres class, a 635CSi in Regularity Division Two and of course, the stunning Ecurie Bowden M1 Procar – the only one in Australia. Freshly restored last year, and undergoing a transaxle rebuild prior to the event, the Classic was the first time it had really raced in anger since its arrival from Japan, and it wowed spectators – many of whom had never seen one in the metal – with its beautiful shape and howling F1-like scream. It was clearly the most popular car at the event, too, even if sharing its garage with the equally stunning ex- Vic Elford McLaren M8E (named ‘Matey’ by its Australian owner) might have partially explained the constant crowd around its garage over the weekend.

During breaks in on-track BMW action, you could still get your fill thanks to static displays in two separate areas. The first, inside the expo hall, housed the aforementioned four-car JPS racer group, as well as a Benson and Hedges Group A Evo and the 1938 328 we featured in our February issue, while the second, out on the adjoining grass area next to the main straight, included a fantastic gathering of road cars from the BMW Car Club of Victoria. Ranging from older metal like a 3.0CSi and 2002s to newer cars like SouthernBM’s M235i from the January issue and one of only 15 E36 M3Rs, there was a clear reason why the club won ‘Best club stand of the weekend’.

As for how the BMWs went on track, the results covered the gamut, as you might expect from such a large number of cars. The most successful entrant was, unsurprisingly, Jim Richards in his wide-body 635. Painstakingly restored by Peter Sturgeon in Richards’ native New Zealand and shipped over for the event, this Group C monster consistently nailed podiums, despite lagging in terms of straight line grunt compared to the Sierra RS500 and R32 GT-R it battled with. In the second race on Saturday, Richards even caught both cars napping on the first lap and pulled a dive-bomb manoeuvre into turn four to lead the race for a couple of laps, proving that even at 68, Richards is still one of the best drivers in Australia.

The rest of the Group C and A BMWs ended up spread throughout the pack, with most running fairly high up the order in each race, but some hanging back due to either performance differences to the leaders (the two JPS 325is) or the fact they were still dialling in the setup (the Asahi Kiko E30).

In the Historic Touring Cars Under 3.0-litres class, the two 2002s basically sat mid-pack and battled it out between themselves for much of the weekend. Each gained the upper hand at various points, but unfortunately, Gabriel Digenis’ red and silver machine had to retire late on Saturday and couldn’t get back out on Sunday.

Stepping down to the more sedate Regularity Division Two class, Tasmanian William Townshend in his 635 seemed to have trouble adjusting to the circuit, only getting close to his nominated 2.07 time in the last event, but no doubt he’ll be back to improve things in the future.

As for the M1, driver Chris Bowden was never going to push it hard on its first competitive outing since restoration, but he did settle in quickly and was gaining pace towards the end of the event. Even a wide-body E-Type blowing its engine in front of him on Saturday, coating the car in oil, didn’t stop his crew cleaning things up to enjoy Sunday’s running.

Overall, you couldn’t ask for a better way to kick off BMW’s 100th birthday celebrations. Die-hard fans of all ages got to enjoy an enormous range of Bavarian metal, both resting and in full attack mode, and newer fans got to learn more about the brand’s vast and impressive heritage. Let’s hope the next 100 years are as memorable as the first.

Above: Ex-Alan Jones Lola THL1-F1 sounded awesome Right: The calm before the storm – Duncan McKellar in the McLaren M8E on the grid.

Above: E24 JPS Six and a brace of E30s at rest in the pits Left: Penrite Oils’ wonderful 328 was one of the stars of the indoor static displays.

How’s that for rare? One of only 15 E36 M3 Rs made exclusively for the Australian market.