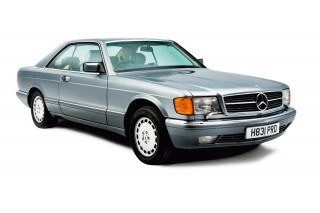 Pillarless can hold a greater allure than a soft-top, none more so than the C126 Mercedes-Benz SEC. Unquestionable presence then and now, its past is catching up with it as evidenced by values tripling in just four years. Until recently low values and expensive repairs caused many to be scrapped; nowadays they’re a rare sight on our roads. Continental cruising is their forte and, with all four windows retracted and sunroof open, they’re simply sublime with no wind buffeting at speeds up to 50mph. 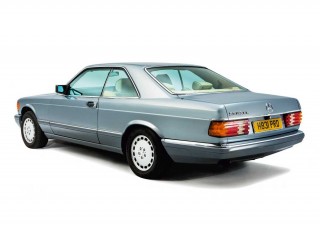 Research is vital in finding a good SEC – use online tools like the MoT History Check to get an impression of the car’s life; failures and advisories are all listed and a useful bargaining tool. Joining the Mercedes-Benz Club will plug you into a valuable network, and it has a special register category for SECs.

Only 153 560SECs remain, of the 500SECs just 260 are left, the rarer 420SECs only 89, and 14 for the 380SEC. Although large they are four-seaters with huge boots and all had a four-speed hydraulic automatic. Industry sources say many were clocked so beware ‘low-mileage’ examples that can have hidden rust, sloppy steering and clonking suspension. A regularly used car maintained with full documentary evidence will be a rewarding buy. The days of cheap SECs are gone, but they’re affordable and worth restoring. Avoid cars with too much bling, and remember colour combination is influential – white cars are not popular. While the 560 is the most sought after the smaller capacity models bathe in its reflected glory and buying on condition is cheaper in the long run. Spares are available from specialist breakers, and there are lots of aftermarket items.

Check the VIN (on slam panel and false bulkhead) and engine numbers (rear of block on the near side) match documents. Originally the 560SEC was 35 per cent more expensive than the 500, offering rapid acceleration with no significant loss of economy and it’s only cosmetic difference is its flared front wheel arches. Standard is automatic self-levelling hydraulic rear suspension that lowers the car 24mm at 75mph. Options on other models are orthopaedic heated seats, town and country horn, and electrically-adjustable steering column.

Bodywork and structure Rust is the deal breaker, if too many panels need repair then add another £4000 for a respray. The seemingly innocuous rear parcel shelf rusts which is a £2000 remedy including rear screen removal and fabricating panels.

Symptoms are bubbling below the rear screen, a milkiness on the corners of the screen and brown stains on the boot carpet indicating advanced rust. If the screen breaks on removal that’s another £500. Moisture penetrating the rubber screen seal and then spreading once inside is the cause, along with condensation, so it’s not mileage related.

Front wings rust near the indicators and behind the cladding. Fortunately the wings unbolt and cost £250 each, although add to that the cost of labour and painting, which will include the bonnet to ensure a good match – budget £750. Rear wheelarches rust, often necessitating cutting and replacement at circa £1200 a side including parts and labour. Door bottoms rust but can often be repaired; if not a secondhand replacement is the only option at £250. Boot and bonnet are aluminium, but sometimes corrode, often only needing light repair. Just as well because panels are no longer available although SEC specialists keep used ones. Hidden areas can rust, typically front suspension mounts, jacking points, sills, boot floor sections and front bulkhead. Repair costs will depend on how much cutting and welding is needed, but being out of sight less finishing is needed and parts can be fabricated.

Different SECs rust more in one place than others so ideally inspect the car on a ramp. Utopia is if you can remove the bumpers and side cladding to get an even better look. Check under all carpets for moisture and smell for damp. Blocked sunroof pipes can cause leaks. Trim Chrome bumper trim rusts and new replacements cost £2000. Other trim is anodised aluminium which can turn milky and the only long-lasting remedy is re-anodising for about £500. Rubber door seals from MB are £250 a side although aftermarket ones are cheaper.

Engine The engines are capable of 200,000-290,000 miles if maintained correctly. It’s rare to find an engine needing a complete rebuild which at £5000-£7000 is a deal-breaker. A better alternative is to fit a decent used one which for a 560 would be £1800, less for smaller capacities. Timing chain and guides should be replaced at 100k miles; check for clattering on startup. It’s a labour-intensive procedure but competent enthusiasts often tackle it. A specialist will charge £1500 for parts and labour. Camshafts may make a slight ticking noise, especially the nearside one. It’s usually rectified for £600. Valve stem seals wear – a little smoking is the giveaway but it’s not a heads-off job; budget £500. Some owners report idling problems, usually caused by faulty relays, vacuum leaks or sensors, which can be tricky to diagnose. Sensors at £200 a piece are usually the most expensive item. Fuel distributors wear – the sign is a smell of petrol. Costs vary depending on quality but there’s a good supply of new and reconditioned parts especially from the USA for around £500. The M-B Club has lots of info on its forum about fixing these issues.

Transmission A history of regular fluid and filter changes will ensure the transmission will go huge distances, in one case 402k miles. Thuds on gear changes are more likely universal joints or driveshafts. Slow changes, slippage, or a ratio not engaging all point to a £2000 rebuild.

Electrics These are the last of the analogue cars and easy to fix. If the EZL (ignition control module) fails it’s £1000, although used ones are available at less than £100. Importantly, some items can be reconditioned.

Fuel relays and over-voltage protection relays often need replacing and can be bought for £85 each.

Air Conditioning Make sure it works effectively. Repairs can mount up with compressors costing £600 plus gas. Ideally the system has been converted for modern R134 gas, and normally there is a sticker on the slam panel attesting to this.

Steering/Suspension/Brakes A test drive says everything; if it feels sloppy, clonks, or isn’t reassuring then it’s worn. Steering boxes can be reconditioned or replaced for around £400. Power steering pumps often need new seals. Otherwise a systematic replacement of bushes, hydraulic pipes, castor joints and ball joints as necessary. Brake calipers are no longer available but can be reconditioned. Afterwards it will drive like a new car and will be money well spent.

Interior It’s hard-wearing although the driver’s bolster can show wear. Budget £500 for deep clean and re-dye. Headlinings often sag at the rear, necessitating replacement. Yellow instrument needles instead of orange indicate the car has spent a lot of time outside.

Such was the performance of the 560 it was nicknamed ‘the Porsche Hunter’, yet it boasted the build quality for which Mercedes had become renowned.

The big capacity engines are the most desirable, especially the 560 but condition is more relevant along with regular use and well-documented history. Interiors stand up well to wear but the driver’s seat bolster can suffer badly. SEC values have risen significantly over the past few years, yet remain good value and are worth restoring.

‘In May 2015 I found a 1990 500SEC C126. It was well serviced, but it needed attention to the front wings – I had one replaced and one repaired. The bootlid had lacquer peel, so I had that and other bits of paintwork rectified. The car always gets admiring glances and I’ll never tire of looking at its handsome shape.

‘The 500 offers plenty of performance and is an effortless cruiser with sensible fuel consumption. The only mechanical work I’ve had done is replacement of all the pipework around the fuel pump. The SEC model is increasingly supported by the excellent Mercedes Benz club with a now annual SEC day.’

‘I’d been looking for a classic with four decentsized seats for the family when I rediscovered the SEC. It had to be the 560 but there were very few advertised. I eventually found mine at a dealer, but it had a towbar, had been converted to LPG and had no MB service history, so I pushed hard on the price. ‘After a year I discovered the dreaded rearscreen leak that these cars are prone to and a world of rust-related pain. My choices were to either sell the car at a rock-bottom price or semi-restore it, so I engaged some marque experts to tackle it and have spent close to £20k on bodywork and an almost total respray.

‘Running costs have been very low, servicing is easy and the car’s been reliable, although 20mpg is your lot. Despite the costs, the car has been fantastic – the engine is glorious and you get plenty of positive comments. It’s such a mellow place to be and so refined I can forgive the outlay. I think I’d struggle to replace it with another of the same quality for any less than I’ve spent on it.’ Howard Plummer, Milton Keynes Bucks.

‘I bought my 1989 Mercedes-Benz 420SEC C126 in 2016 for £2600 as a retirement hobby/project, having previously enjoyed reviving a W123, with some success. I thought it would just be a bigger W123. Wrong! ‘My car had a number of bodywork issues, a highish mileage, no service history for the last 10 years, a worn and filthy interior, sagging headlining, high idle issue and various electrical maladies. However, I saw the potential to end up with a comfortable and stylish car that I would enjoy. Plus, the rear parcel shelf had been repaired.

‘I have enjoyed restoring mine close to its former glory. I replaced various areas of rusty metal before repainting the car. It was three different shades of blue! I’ve restored the leather, done plenty of mechanical work and estimate I’ve spent a further £3500, doing the work myself.

‘Routine servicing costs need not be expensive, but repairs can be, so buy the best you can afford or at least one with the common issues sorted. Mercedes-Benz still makes many parts for these cars, and some can be reasonably priced, so always check with a dealer first. ‘Finally, I would like to say thank you to all the members of the Mercedes-Benz Club who have provided invaluable information, advice and support. I simply couldn’t have completed some of the jobs on this car without them.’