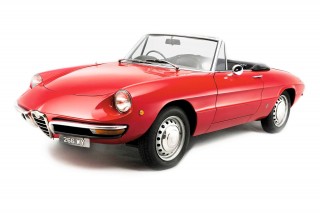 Nine steps to buying a Alfa Romeo Spider With prices chasing the coupés now’s the time to buy a Spider, with our advice Words Malcolm Mckay. Photography John Colley. Buying Guide How to buy the finest Alfa Romeo Duetto.

Fith film-star-gorgeous looks, great handling and a gutsy twin-cam engine, the Alfa Spider is a superb sports car that’s better value now than when it was new – especially in Britain, where the cost of right-hand- drive conversion by the UK distributor whacked the price up. There are now more here than ever, imported from many countries over the years; the fact that most recent imports are left-hand drive helps to keep prices down. Take time to consider which of the four series is best for you, then look carefully for a car that has been well cared for – especially the bodywork. 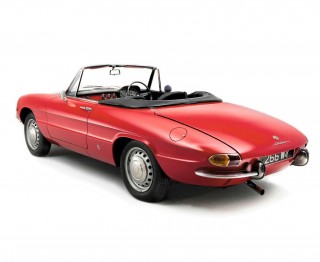 Sharing their wisdom on Spiders with us on these pages are Stuart Taylor, Alfa Romeo Owners Club Giulia 105/115 Registrar for more than 20 years; Chris Sweetapple, whose company Highwood Alfa supplies and manufactures a wide range of Spider and other Alfa parts; and Peter Smart, whose Classic Alfas company services, restores and race-prepares Guilias, Spiders and other classic Alfas.

There were many variations through the Spider’s exceptionally long life, with four engines ranging from 1.3 to 2.0 litres. Over time styling changes and emissions requirements diluted looks and performance, but later cars still have plenty of appeal and pack modern comforts such as power steering, electric windows and electronic fuel injection.

1969-1982, S2 ‘Coda Tronca’, identified by Kamm tail. A steeper windscreen and revised grille and trim accompanied the cut-off tail and bigger rear lights. In 1971 the 2000 Veloce replaced the 1750 with 132bhp, updated interior and options of limited-slip differential and alloy wheels. The 1600 and 1300 continued but the latter was dropped in 1978. A dash restyle came in 1980 and headlight covers were deleted in 1982.

1982-1989, S3 ‘Aerodinamica’, identified by spoiler tail. A black rubber tail spoiler and restyled grille and bumpers gave the Spider a new look (arguably its least attractive), still either 1600 or 2000. In 1986 the Quadrifoglio Verde introduced an integrated front spoiler and ugly side skirts, along with the optional three-way catalytic converter with Bosch L-Jetronic fuel injection. Power dropped to 127bhp.

Corrosion is, unsurprisingly, the biggest enemy of all models. S4s are particularly rust-prone because the sills fill with water when their drains clog up; the sills are complex structures and replacement costs around Ј1500 per side. The boot floor and footwells also need careful inspection; when checking the latter have a good prod at the base of the inner sills because it’s not unusual for covers to be fitted over rotten outer sills, leaving the metal to fester away inside.

Rot can strike almost anywhere on earlier models. The steel used on Alfas up to the Nineties was very poor and seemed to rot from the inside out even if attempts were made to protect it. Check that rusty metal has been cut out, new metal has been let in correctly (seam-welded if within 30cm of a suspension mounting or load bearing point as per MoT rules) and protection applied for the future.

Most body panels are available, especially for the S2 onwards; Duetto panels can be costly with front wings more than Ј1000 each. A full professional body rebuild will cost about Ј20,000, so project cars are really only for the DIY enthusiast.

Engines are a delight – the compact all-alloy four-cylinder with twin-cam crossflow cylinder head is efficient and powerful in all its guises. When it does wear out (look for excessive oil breathing, leaks, blue smoke in the exhaust and listen for bearing knock), it can be fully rebuilt for Ј4k-5k.

Many owners discard the Spica fuel injection fitted to meet emissions control on US-market cars from 1969 to the Eighties, although those who can make it work (try Porsche 911 specialists) say it’s not at all bad. It’s often replaced with Webers or Dell’Ortos but you’ll need to budget Ј1000-plus for the carburettors, controls and manifold. Carb-fitted cars were given Weber, Solex or Dell’Orto 40s at different points in production; there was no significant performance difference between them. Most owners prefer Webers but Dell’Orto parts availability is the best. Solexes are often replaced when the throttle spindles wear – the spindles ran directly in the aluminium casing, and fitting bushes is a specialist task.

The manual gearbox was a delightful five-speed all-synchro unit throughout. If the clutch is heavy it probably needs a new flexible hose (except Duettos which had a cable clutch). The synchros go eventually; an exchange rebuilt gearbox is Ј750, or Ј810 for cableclutch cars. All bearings and synchros are available but some gears can only be found secondhand.

A ZF three-speed automatic was optional on S4 US and Japanese-market cars. If it’s worn out (ensure smooth changes, especially kick-down), budget Ј2000 for an overhaul, including fitting.

Rear axle leaks are common and an axle running low on oil will be noisy and may seize. Differentials in need of replacement after 60,000 miles are not rare, especially on S3/4; an exchange reconditioned limited-slip unit costs Ј1000.

Electrics on Italian cars often come in for criticism; Spiders are no worse than most contemporaries. It’s important to check everything works, especially on S4s which have electric windows and mirrors as well as electronic ignition and fuel injection. An uprated ECU such as those from Squadra Tuning or Autodelta can boost both torque and bhp.

Interiors aren’t a big problem, with new seat covers costing Ј150-200, although sourcing some smaller trim items can be a lengthy exercise. Dashboards for right-hand- drive cars are also hard to find.

The soft-top is well made and easy to use, but you’ll need to budget Ј750 plus fitting for a replacement. Check the condition of the frame, especially the header rail, because it can rust and/or twist. Duetto frames were unavailable for decades but can now be sourced via Highwood Alfa for around €4k.

Exterior trim is not the big issue it once was, with most parts now available for S1/2, though later cars are not yet quite so well served. Alfa Romeo shows no interest in servicing its historic cars, but specialists have organised production of bumpers; a pair of front bumpers for the Duetto is Ј900 and rears are Ј630.

Running gear The suspension and steering have a significant number of joints (six in the steering alone) and a full overhaul with new bushes front and rear can easily be Ј1000-plus. A little play is permissible in the steering box, but more than 20mm at the steering wheel rim needs investigating. Power assistance arrived in 1989. If the car feels woolly or unsettled, budget to replace lots of bushes.

Brakes were discs all-round and dual circuit from 1970. Most rhd conversions had twin servos, costing Ј85 each if reproduction replacements are required. The handbrake uses small shoes inside the disc brake hub; never particularly effective, they’re prone to seize up from infrequent use and often cause MoT failures.

‘When I saw Dustin Hoffman’s Alfa Spider in The Graduate I said to myself I’d have one some day. Five years ago that day came; I flew to Edinburgh to see the 1968 1300 Junior seen on these pages. It had some body issues, but the price reflected that.

‘It had been imported from South Africa 15 years ago and had recently had a new hood, interior and gearbox rebuild. I’ve added around 30,000 miles to the 65,000 it had when I bought it; I don’t think the engine has ever been rebuilt but it’s had no problems at all. After a year I took it to Alfaholics to have the body looked at and they recommended Red Castle Classics in Wales, which replaced the sills and door-bottoms, repaired the rear valances and front lower wings and resprayed the whole car for a total of £5000. The only other thing I’ve done is change the rubber carburettor mounts to aluminium, because the originals were perishing.

‘We’ve enjoyed using it for holidays all over the UK and going to classic car shows – it’s never let me down.’

‘My 1974 2000 Veloce had been standing in a garage for ten years when I bought it, though it came with lots of history and had been serviced by an Alfa dealer – the last bill was more than £1000. It had very few owners and a genuine 38k miles from new.

‘A mechanic friend inspected it and the only thing he could find was a leaking differential gasket. I also had to replace the missing jack and toolkit. The radio has never worked and the lock on the glovebox broke, so I bought a secondhand one. ‘After one long drive the rear brakes locked up. I fitted new discs which hold the drum brake handbrake and new cables. Some parts were not available new, but Classic Alfa had secondhand items. The problem kept happening but was eventually traced to the rear flexible hose, which had swelled inside. The only other issue I’ve had was a snapped rear suspension rebound strap – it was quite a job to replace because of the rust and dirt under the car.’

‘Having always liked Alfas, I decided to buy a Spider in 1997 and looked at all models from round-tail onwards. A lot were rust-heaps, so in the end I bought a very clean seven-year-old S4 imported from France. ‘It had mechanical problems from time to time and I’ve learnt to replace all the suspension bushes every 40,000 miles or so. I also bought an automatic S4 in 2009 in need of a complete mechanical overhaul. Initially I had work done on both cars by specialists, some good and some not so good. I later started doing a lot of the work myself because I quite enjoy it and you really get to know the cars well, save money and know that the work has been done thoroughly.

‘The Alfa is a practical car, comfy with a roomy boot, effective hood, 33-35mpg on a run and great performance. With fuel injection, electronic ignition, power steering and electric windows, it’s an easy and reliable drive. Rust can be an issue and it’s a bit tail-happy, but you soon get used to that. ‘I had the automatic Spider for six years and spent about £16,000 on it in total – I paid £4000 for it, which was £3000 too much. It was a good reliable car eventually, but the three-speed gearbox meant motorway driving was less relaxed than the manual – 80mph at 4000rpm against 3500rpm. I sold it last year to make room for a classic V6 916 Spider, which is a whole load of fun.’

‘There are now more in the UK than ever, imported from many countries over the years’

Over four iterations the Spider’s appearance, engine capacity and performance evolved markedly – but the common thread running through the whole breed is that they all offer fine looks, performance and handling.

Engines range from 1.3 to 2.0 litres – all are straight-fours with a crossflow twin-cam cylinder head and are reliable and fizzy performers if well maintained.

New seat covers are available for £150-200 but sourcing other trim, especially right-hand-drive dashboards, can take time.

S1 Duettos like this example, distinguished by a rounded boat-tail, command the highest prices, but the key to buying any Alfa Spider is finding a car that’s not threatened by extensive corrosion.