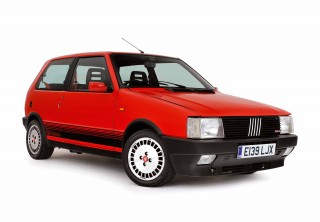 Buyers’ Guide Fiat Uno Turbo. Among pocket rockets of the 1980s, Fiat’s Uno Turbo has a reputation as one of the feistiest of all. Increasingly rare these days, what do you need to know if you’re in the market to own one? Story by Richard Dredge. Images by Michael Ward.

Fashion has a habit of being cyclical, and nowhere is this more apparent than the 1980s hot hatch. All the rage 30 years ago, the genre fell out of fashion in the 1990s due to high insurance premiums and the fact that many of them were thrashed, abused and neglected. While the hot hatch has made a resurgence in recent times, those original 1980s tearaways have become seriously collectible among classic car fans. The problem is that, after many years in the wilderness, there are very few good ones left, which in many cases has led to prices getting a bit silly. 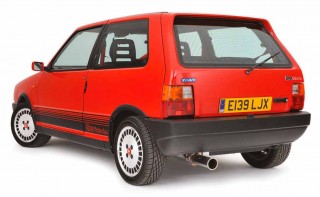 While many classic hot hatch enthusiasts clamour for a mint Golf GTi or Escort RS Turbo, there's a more low-key alternative which is more attainable when it comes to value: the Fiat Uno Turbo. But you've still got the significant problem of tracking down something worth buying, because Uno Turbos in any condition are seriously scarce, with minters particularly hard to find.

The Uno Turbo arrived in July 1985, with a 1299cc engine that gave a modest 106hp, enough to take the car to 124mph. While the Turbo was based on the lowly Uno 70, it was far more than a standard car with a blower bolted on. Alongside water-cooled cylinder liners, there was an intercooler and oil cooler, along with electronic ignition, knock sensor and Bosch LE2 Jetronic fuel injection.

Within 18 months the displacement had grown by 2cc, but the big change came with the appearance of the Turbo Mk2 in September 1989 (January 1990 in the UK). With a restyled nose that housed a 1372cc powerplant, there was also multi-point fuel injection to give 120hp; the catalytic converter fitted from June 1992 took the edge off the free-revving four-pot, with power dropping to 116hp. Production of the Mk2 Uno Turbo lasted until 1993, with the arrival of the Punto. However, regular Uno production lasted until 1995, and some Turbos weren't registered until the same year.

The steering is perfectly weighted and beautifully direct, and even at speed the car is surprisingly refined. The ride is also good considering how small the wheels are, but the gearbox is disappointingly notchy at first, although it’s something that’s easy to adjust to. With the Uno Turbo being a relatively early blown hot hatch, it would be easy to assume that it suffers from horrific turbo lag, but nothing could be further from the truth. The power feeds in as soon as the throttle is pressed, although you need 3000rpm on the dial before the car performs with any urgency. From there on, the power and speed just build, right through to the 6000rpm red line.

The Uno feels so sprightly because of its light weight, tipping the scales at just 845kg (Mk1) or 895kg (Mk2) – a modern equivalent such as the Renault Clio Sport 197 weighs nearly 400kg more. That’s why it comes as no surprise that the Uno is so delicious through the bends; of course it’ll understeer if you overdo things, but exercise some restraint and the front end just goes where you ask it to, with little in the way of fuss or drama. Well – up to a point. 13-inch wheels are by modern standards laughably small, but it’s essential they're retained, because if you go sticking huge alloys and ultra-sticky tyres on the car, you risk destroying the car’s great balance.

Engines are strong and despite the 1301cc powerplant having just 2cc more than the earlier unit, the extra zip is definitely noticeable. Regular servicing is essential. Fully synthetic oil is unnecessary as a 10w40 semi-synthetic lubricant is fine; it's what the engine was designed to run on, along with tripleelectrode spark plugs. A new cambelt should have been fitted within the last three years or 36,000 miles; it's easy to do on a DIY basis.

Engine ancillaries such as the water pump, alternator and starter motor are durable but don't expect any more than 70,000 miles from the Mk1's IHI turbocharger. These are more expensive to source or have rebuilt than the Garrett turbo used on the Mk2; budget around £450 compared with £350 for the Garrett, if there's no major damage.

Thanks to aftermarket suppliers, you'll have no problem sourcing service parts and most gaskets.

However, engine components are much harder to find. Fiat dealers can't help so you'll be reliant on Italian eBay, although you might stumble across some new-old stock that's been stashed away in the UK for years. Early Mk1s use a Strada-derived gearbox with a bottom-change linkage that wears quickly, revealing itself by a very vague feel. It's easy to fit new bushes but even with these in place you can't expect a really precise gearshift. Bottom-change gearboxes can suffer diff bearing wear or failure, as well as worn synchromesh, particularly on third gear. From mid- 1987 the newer C510 gearbox was fitted, borrowed from the Tipo. This gearbox is still used on the Abarth 500 and it's got a much nicer change thanks to the use of a top-change mechanism, but it's still not up to modern cable-change standards. At least the C510 gearbox is very tough, the only likely problem being a slight diff whine once the car has racked up a huge mileage. This transmission was carried through to the Mk2 Turbo and parts supply for it is poor, with Italian eBay once again the best source.

Clutches don't give problems unless abused or power levels have been increased to silly levels. If a new clutch is needed, you can buy one for well under £100.

The brakes work fine in normal use but they lack feel; discs were fitted front and rear. Upgrading to larger callipers and discs is easy and worthwhile; take your pick from Punto, Bravo/Brava and Marea parts, all of which are readily available on a new or used basis, with a ready supply of aftermarket discs and pads. The handbrake operates on the rear discs via a combined hydraulic/mechanical calliper that wears internally, reducing effectiveness and reliability. Repairs aren't possible so it's best to replace with a reconditioned calliper for £150 or so per side.

The suspension doesn't give any problems other than the possibility of wear because of age or high mileage. Everything is available on an aftermarket basis; when fitting replacement parts most owners opt for lowering springs and dampers because the Turbo sits rather high with the original set-up. Dropping the car arguably improves the aesthetics as well as the handling.

Unless you're looking at a mint restored Uno Turbo, some rust is inevitable. Mk2s fare a little better than Mk1s when it comes to rust resistance, but whatever the car you need to concentrate on the top of each front inner wing, rear inner wheelarches, around the sunroof (if fitted), sills, floorpans and door bottoms. That said, corrosion can rear its ugly head pretty much everywhere. The underside of the rear end contains several enclosed areas that serve as moisture traps where rust will eat its way out, so do lots of tapping and prodding with the car on a ramp.

Some body panels – including doors, sills, rear panel and rear wings – are common to both the Mk1 and Mk2, which makes sourcing them easier. However, other key panels such as the front wings, bonnet and tailgate are specific to each version. Predictably, Fiat and its dealers can no longer help with panel supply so you'll need to trawl Italian eBay once again to find what you need. As well as genuine parts, there are plenty of pattern items, but it's the OE parts that are the quickest and easiest to fit – if you can find them. The front bumpers are specific to the Uno Turbo, with the Mk1 and Mk2 each getting their own design. With no pattern parts ever made, you’ll have to find the genuine article; as you'd expect, you'll be lucky to stumble across the correct bits and you're unlikely to find a bargain.

The seat fabric used in the Mk1 is fragile and wears easily, with the later type being only marginally more durable. Even low-mileage cars can be looking the worse for wear, and unless covers have been fitted since the car was new, any Turbo that's covered more than 80,000 miles is likely to have a really tatty driver's seat at the very least.

Fiat stopped supplying replacement fabric ages ago but it's now being remade in Italy, at a price. Interior plastics are flimsy but durable enough, as is the carpet; the Mk2 has a more understated interior with more long-lasting fabric. The headlining tends to peel and sag, necessitating replacement or retrimming. Expect dash rattles and creaks on any Uno Turbo, especially if it's a Mk1.

Corroded contacts and poor earths are likely to cause electrical problems, so check everything. The Mk2 is less prone to problems than the Mk1, partly because it’s newer but also because the Mk1 had a shortage of relays, so equipment such as the headlights and electric windows (if fitted) are wired through long runs of aged cable, while the contacts inside the switches often degrade. What starts out as a healthy 12.5 volts at the battery is barely 10 volts by the time it reaches the other end, resulting in slow electric windows and dim headlights. Mk2s are better but any Turbo can benefit from improvements, such as extra relays and shorter cable lengths – although beware that such mods can make things worse rather than better if not done properly. Look for evidence of the loom having been hacked about in an attempt to fit or remove security or stereo equipment, as this is a common problem.

The official maintenance schedule demanded a minor service every year or 9000 miles, while a major service was due every two years or 18,000 miles. Most Uno Turbos today cover a tiny annual mileage, so an oil and filter change every 12 months is the norm, while a fresh set of spark plugs and leads is usually fitted every four or five years.

Long-term Uno Turbo enthusiast Jeremy Nesbitt owns the Mk1 car pictured. He comments: "Buyers prefer originality as much as possible but sympathetic upgrades to the exhaust, brakes and suspension can increase desirability without adding value. When new, the Mk1 was offered with three main options: electric windows, sunroof and digital dash. You could have each of these included as standard or pay extra for all three, so all Mk1s should have at least one of these. The Mk2 had electric windows as standard, a sunroof was an option and the digital dash was dropped.

Whether you're looking in Europe or the UK, Uno Turbos are hard to find. At the time of writing, a well-known Phase 1 car was available for £8000. In much better condition than most survivors, the price is eminently reasonable – especially when you consider that the only other car we could find for sale was in Italy. A left-hand drive two-owner car built in 1990, it had 65,000 miles on the clock and was up for a stiff £9995.

THANKS Many thanks to Jeremy Nesbitt, owner of the superb Uno Turbo pictured, for his help with this buying guide and the photo shoot 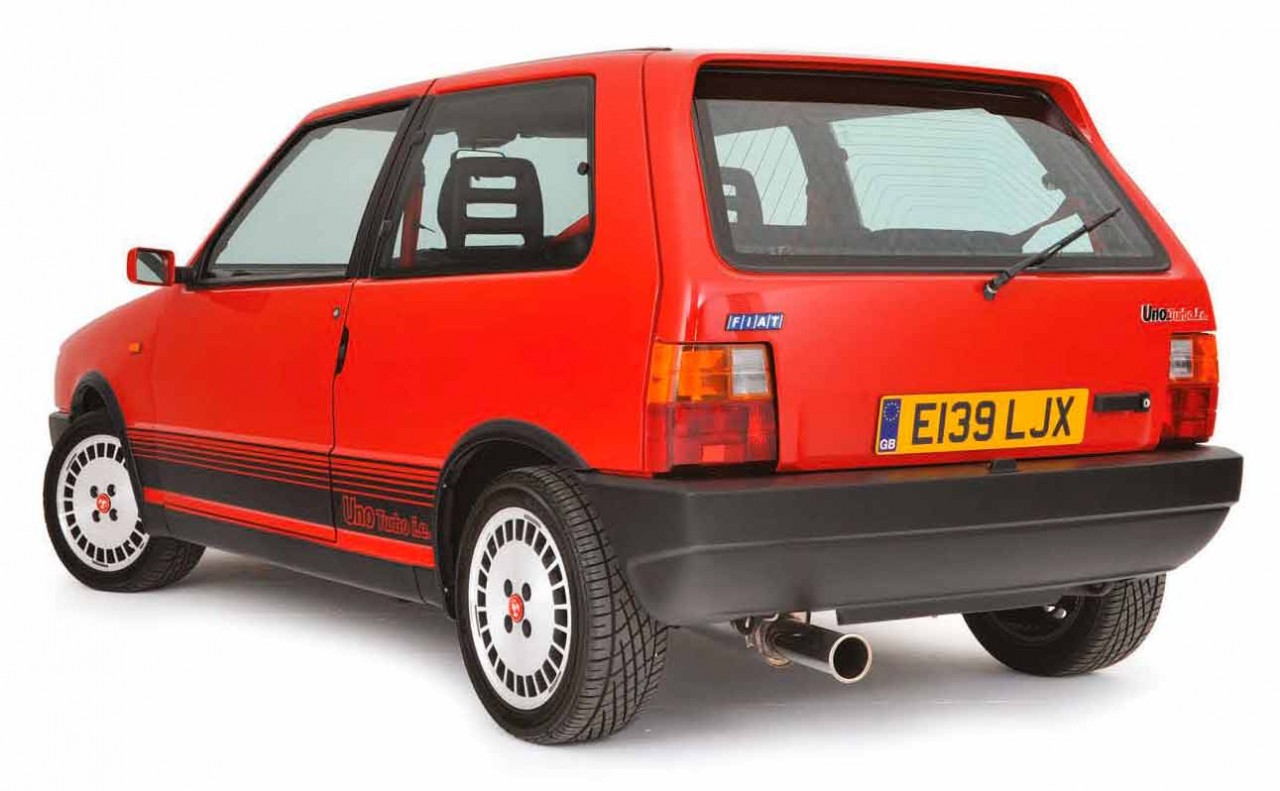 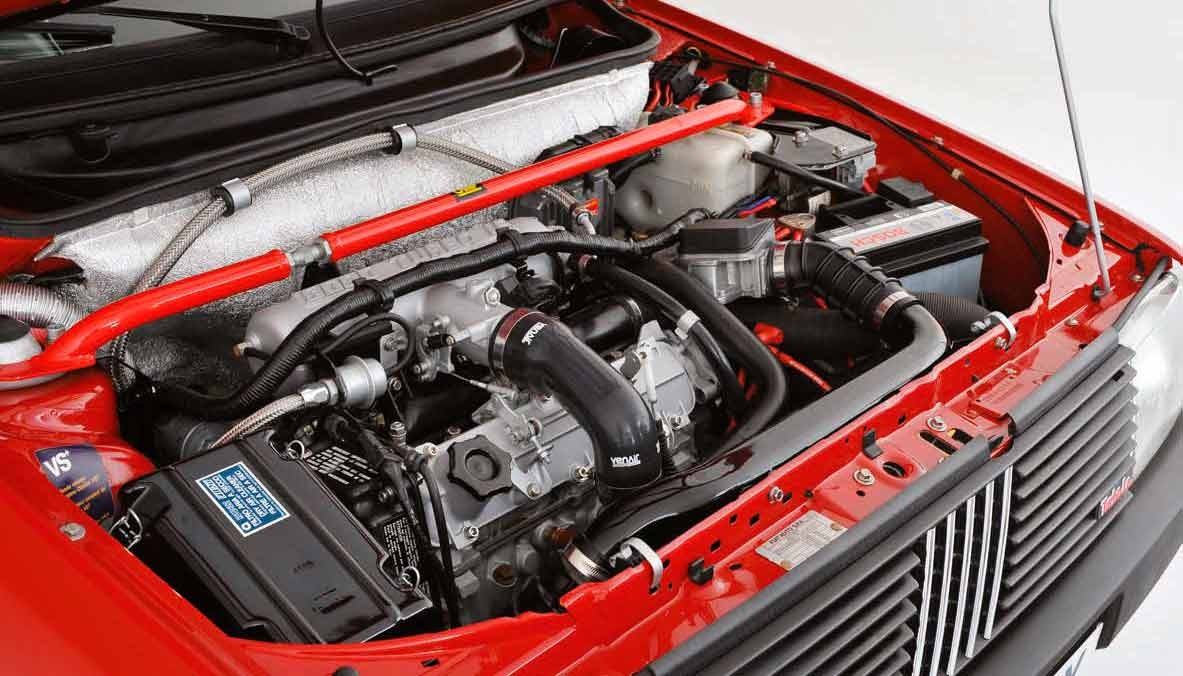 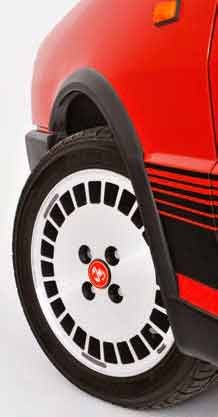 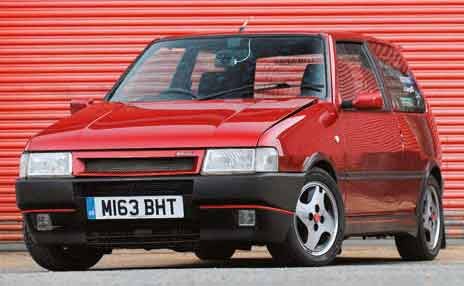 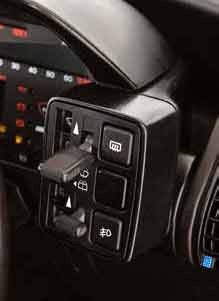 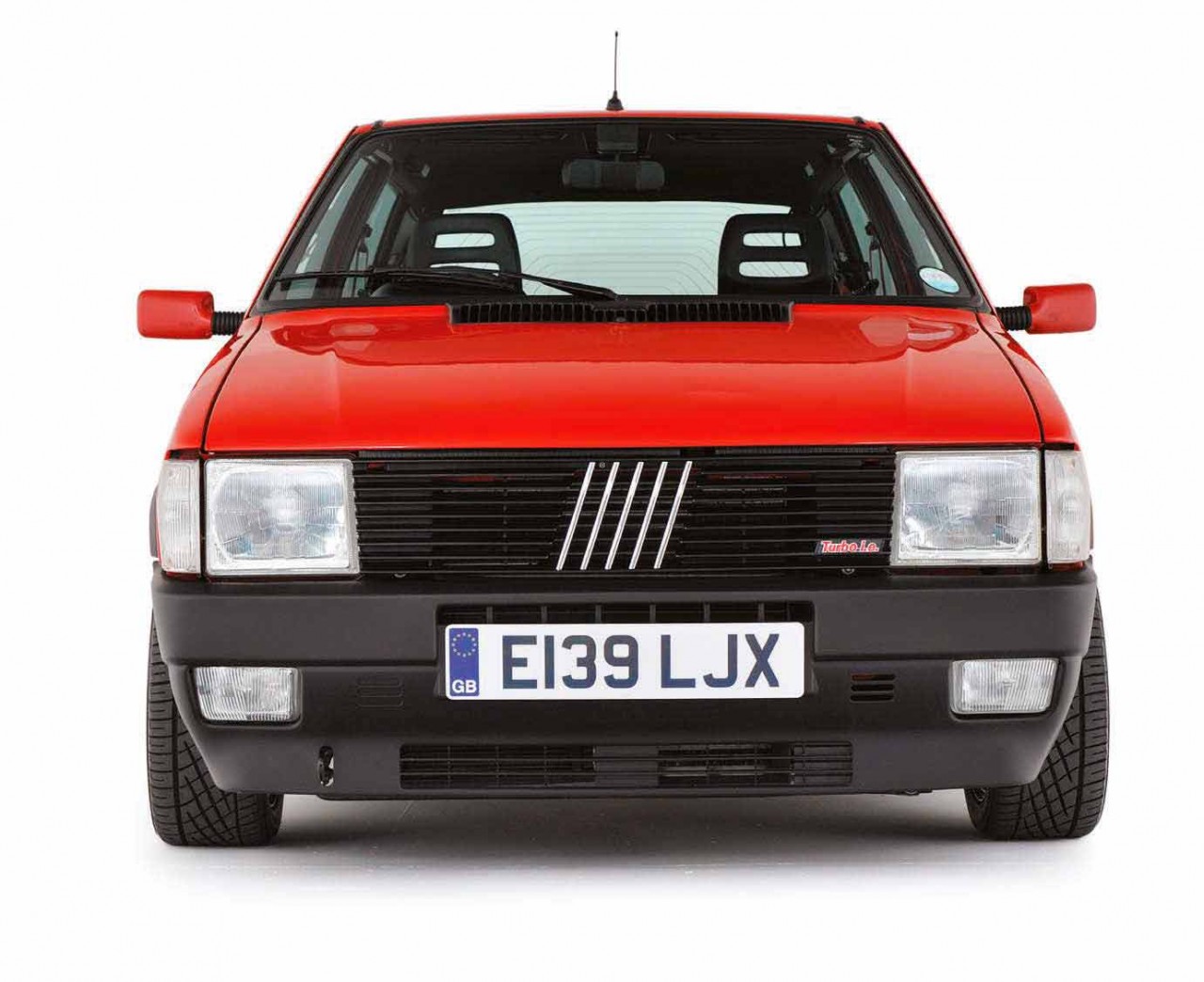 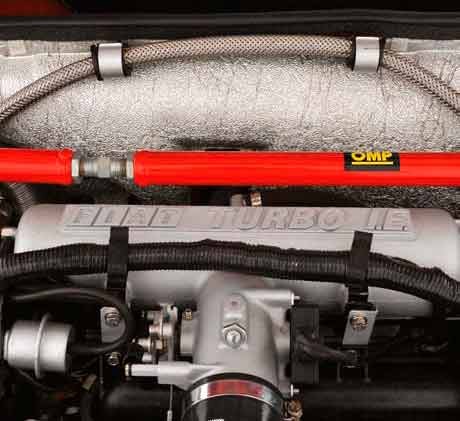 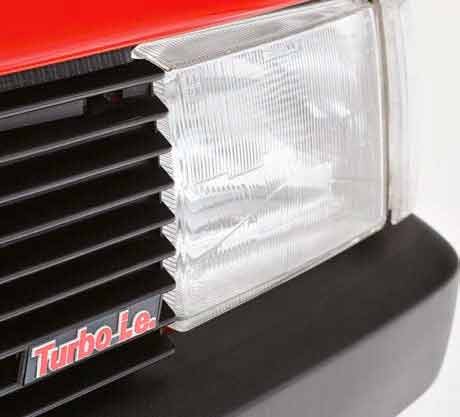 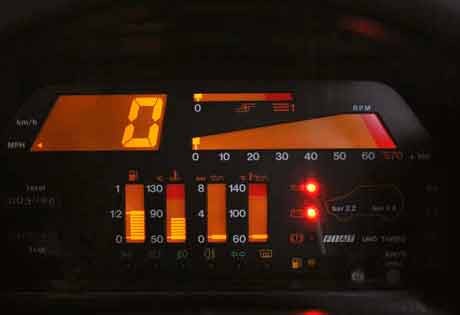 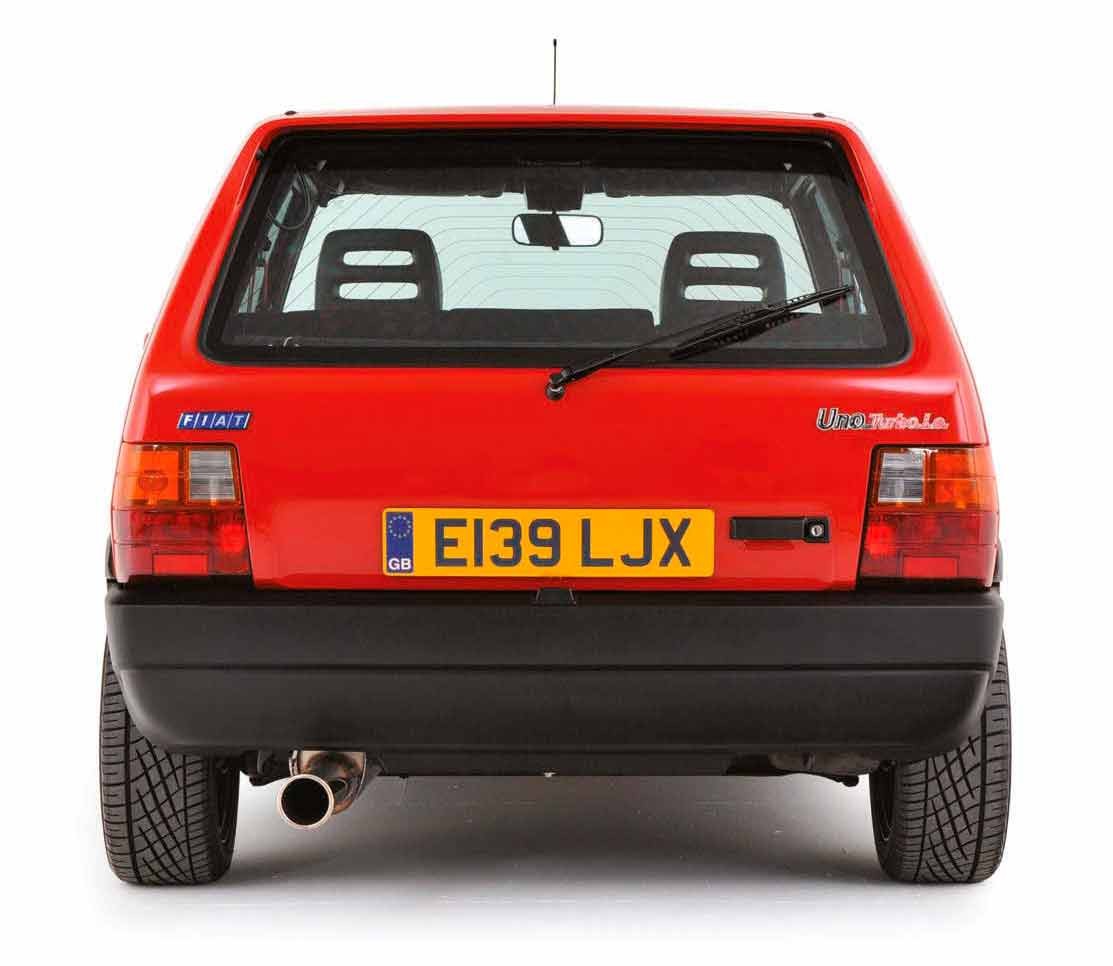 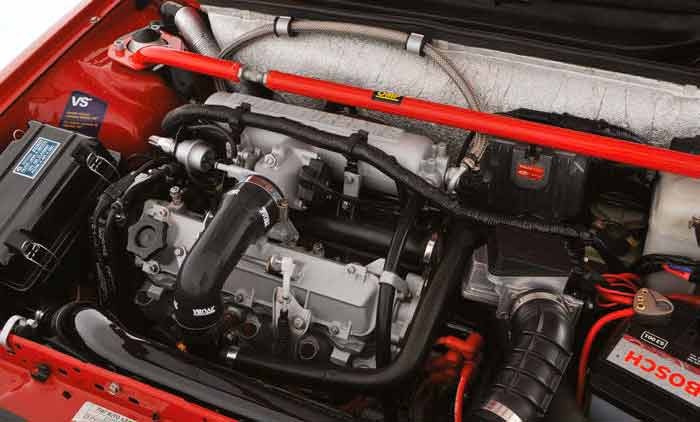 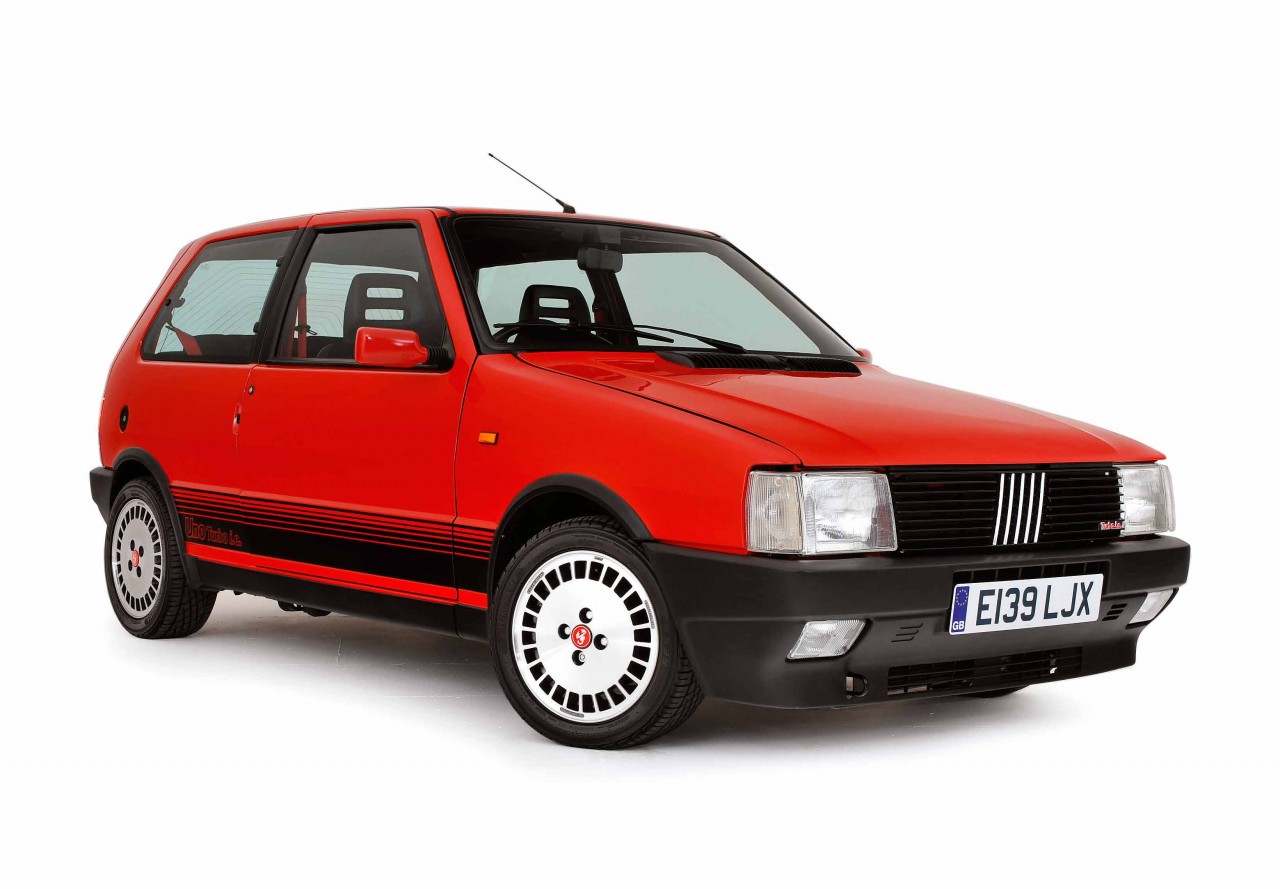 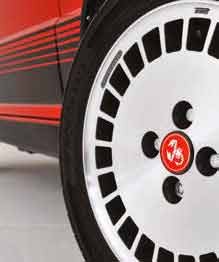 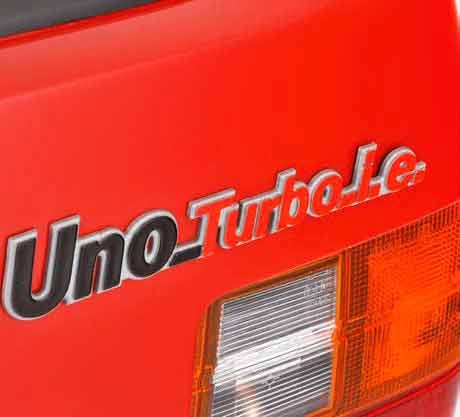 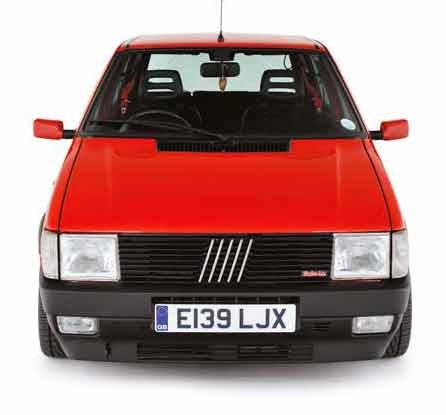 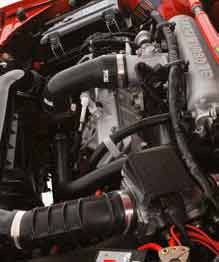 You need to check carefully for body and chassis rust, whether you’re looking at a Mk1 (above) or a Mk2 (below right). Mk1 Uno Turbo has a 1.3-litre engine with 106hp. Early-spec IHI turbo tends to last 70,000 miles before needing replacement.