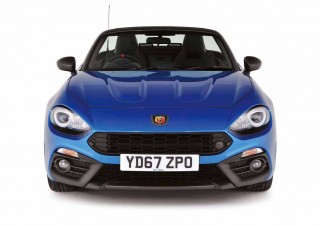 You're a car maker that wants to develop a new, affordable rear-wheel drive sports car, so where better to start than by collaborating with the maker of the world's best-selling and longest-lived budget sportster? Now in its fourth generation, the Mazda MX-5 revolutionised the cheap sports car market when it arrived in 1989, and as one generation has superseded another, Mazda has never taken its eye off the ball. So when Fiat teamed up with Mazda to create the fourth-generation MX-5 and the 124 Spider, it was nothing less than a masterstroke. 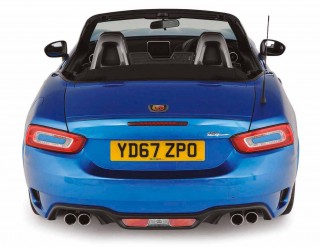 The original Fiat 124 Spider broke cover in 1966; half a century later the second-generation 124 Spider reached showrooms, priced between £19,545 and £23,295. The first cars were delivered to their owners in August 2016, with three trim levels offered: Classica, Lusso and Lusso Plus. The entry-level Classica came with 16-inch alloy wheels, electrically adjustable body-coloured door mirrors, air-con, cruise control, Bluetooth and a three-inch display on the dash.

The range-topping Lusso Plus added adaptive LED headlights, automatic lights and wipers and a nine-speaker Bose audio system. Whereas most car makers try to squeeze as much extra cash out of buyers as possible, by offering an extensive options list, the 124 was offered with pretty much no extras. The idea was that instead of choosing options you simply moved up a trim and if the Lusso Plus didn't have what you really wanted – well hard luck. Classica buyers could pay £750 for the seven-inch display fitted as standard to posher 124s, and there were special paint finishes available for £350-£750 on all three trims, but that was it. How refreshingly simple. And there was also just one engine option too, a turbocharged 1.4- litre MultiAir unit rated at 140hp. 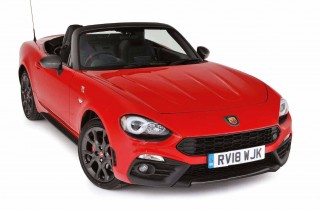 For those who wanted a bit more go, Abarth’s 124 Spider was introduced soon after the Fiat. It featured the same 1.4-litre MultiAir engine but with an extra 30 horses and 7lb ft more torque. The result was a car that was 10mph faster at the top end and which could despatch the 0-62mph sprint almost one second quicker.

Whereas the Abarth was available with a Sequenziale Sportivo dual-clutch automatic gearbox from the outset, it wouldn't be until summer 2017 that this transmission was offered on the Fiat. Carrying a £2040 premium over the six-speed manual gearbox, two-pedal Fiat 124s are rare, although plenty of automatic Abarths have been sold.

To distinguish the Abarth from the Fiat, it has more aggressive front and rear bumpers, blistered wheelarches and a limited-slip differential as standard, as well as recalibrated spring and damper rates that put the emphasis on handling rather than comfort. Once again the options list was short: a nine-speaker Bose hi-fi cost £795, sat nav £420 and for £1,250 a Visibility Pack added adaptive LED headlights, rear parking sensors and automatic lights/wipers.

Red/white or grey paint were available for £400 and £600 respectively, and for those who wanted to emulate their favourite rallying hero, a no-cost Heritage Pack consisted of a matt black bonnet and boot. Already there have been a couple of special editions. At launch there was an Anniversary edition, limited to 124 examples for the UK, priced at £23,925 and available only in metallic red. Based on the Lusso Plus and featuring that car's standard equipment, the Anniversary was identical mechanically to the regular 124.

Then, in September 2018 an Abarth GT was launched. Restricted to 50 examples for the UK, the GT comes with a carbonfibre hardtop as standard. Priced at £33,625, the GT was offered in grey, black or white.

A 1.4-litre engine (albeit turbocharged) and just 140hp might sound like a recipe for rather pedestrian performance, but the Fiat feels plenty quick enough – with the Abarth feeling usefully faster again. It's no wonder; both cars weigh barely more than a tonne, ensuring great agility as well as sprightly pace. That four-pot is beautifully free-revving, and thanks to the low boost pressures, it feels and sounds like a naturally aspirated powerplant so the power delivery is absolutely linear.

The six-speed manual gear shift is the better to drive, with fabulously slick changes. While the auto is smooth enough, drive it hard and you'll be frustrated by the slow gear changes, which is why you'll invariably resort to using the paddle shifts which do transform the enjoyment levels.

Compared to Mazda’s MX-5, Fiat has dialled the suspension to make it is a bit softer; the ride is that little bit less hardcore and it’s at its best in top-down touring. The Abarth is sportier than the Fiat but it's still all very civilised. Which is the whole point of the 124 – this really is a two-seater sports car that you could live with on an everyday basis, and have enormous fun while doing so.

Get your 124 Spider serviced by an official Fiat dealer and included in the price is a year's worth of European breakdown cover. Bear in mind, though, that not all Fiat dealers are also Abarth outlets. While any Fiat dealer can service an Abarth, they wouldn't be able to do any recall work, so if you're intent on buying an Abarth it might be worth pinning down where your nearest dealer is.

When Rob and Cath Cawley moved to the countryside, they decided that a two-seater sports car would be just the job to help them enjoy retirement. They'd previously owned an array of roadsters including MG Midgets and a Porsche Boxster; they fancied something new and inexpensive which narrowed things down to the Mazda MX-5 and Fiat 124.

Says Rob: "We tried both cars but I can't get on with the Mazda's styling, whereas the Fiat looks brilliant. The problem was that we wanted an automatic but found it impossible to source anything other than a manual-gearbox Fiat. Then we discovered that automatic Abarths are easier to find, so we bought one of those.

"Since taking delivery we've found that there's very little we don't like about it. The handling is brilliant, the ride and seats are very comfortable, you don't see many of them about and it's very practical; there's enough boot space to carry three decently sized bags. The only two downsides are the infotainment system which crashes sometimes – but sounds great – along with the TCT gearbox. It's smooth enough and if the paddles are used it's superb, but left in auto mode it hangs on to the gears for too long.”

At 5ft 9in, Rob reckons he's towards the upper limit of what the 124 can comfortably accommodate; but at 5ft tall Cathy says she can't see out of the car comfortably when driving. David Quinn owns the car pictured and, at six feet tall, he reckons someone a few inches taller than him wouldn't struggle to get comfy. He adds: "After a run of Abarth 500s, 595s and 695s I tried a 124 and initially didn't like it, but within an hour I was hooked. The 124 is a great package; not astoundingly fast but easy to drive. It's well equipped, has excellent build quality and the roof mechanism is just so simple and effective. This car was built to my own specification, but if I was doing it again I'd opt for the £1250 Visibility Pack just to get the parking sensors."

Most 124s are still being run by their first owners, many on three-year PCPs, so there aren't as many on the used market as you might expect. The cheapest Fiat 124s have now dipped below £15,000, although most are priced above £16,000. Few of these cars have breached the 10,000-mile barrier; most are yet to cross the 5,000-mile threshold.

“The handling is brilliant, it’s very comfortable, you don’t see many of them about and it’s very practical”

Abarth version may cost about £9500 more than Fiat new, but looks very good value as a used buy.

THANKS Many thanks to Dave Quinn, Rob and Cath Cawley, Startins Fiat Redditch (www.startingroup.co.uk) and Grays Fiat Warwick (www.graysgarage.co.uk)