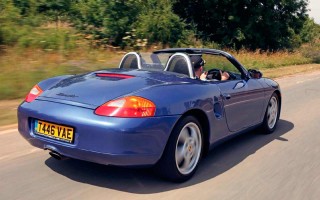 The car that saved Porsche from takeover in the late 1990s, the Boxster shared its headlights, front wings, bonnet, interior and engine with the first watercooled 911, and used a 2.5-litre engine. Production started in Stuttgart, supplemented from ’1997 in Finland (the VIN has ‘U’ instead of ‘S’ as the 11th character).

The engine grew to 2.7 litres, with a 3.2 ‘S’ alternative, in ’1999. While the 2.5 is currently the bargain basement, the 2.7 is seen as the ultimate everyday Porsche, easy to drive, with lively throttle response and great road manners. The 3.2 S is a more focused package, with a firmer ride and enough power to get into trouble.

When new, it was easy to add more than £10k to the £33,950 price. Standard 2.5s were bland inside: a good spec as on the car photographed makes a much nicer environment. Extras ranged from small to large trim upgrades (centre console and full leather being among the more desirable) plus air-conditioning, traction control and sport pack suspension. The optional hardtop is nice but hardly necessary with the rapid, well-engineered and effective soft-top.

With currently a small differential between the models, it makes sense to buy the latest, bestspec 3.2 that you can find. Long term, a loaded early 2.5 with low mileage will appreciate on rarity value; for the moment, prices have levelled but are not yet rising. Final-year 3.2s are often sold as the ‘Anniversary Edition’: don’t confuse those with the 1953 silver Spyder commemoratives, which have a numbered plaque on the centre console as well as a unique spec.

A full service history with Official Porsche Centres or recognised specialists is far more valuable than low mileage, which can cause more problems than the opposite. Full recent maintenance with nothing before is better than bills for just the first 12-15 years. While rust is not an issue, it can occur where repairs have been left untreated, so inspect thoroughly. The interior is durable, with bolster wear first to show up: a good trimmer can tidy up or re-upholster a worn seat. Feel for wet carpets behind the seats, usually caused by blocked hood drains.

All Boxsters are fun to drive, but the 3.2 S is the sharpest. Cutaway shows mid-engined layout and all-round struts.

5 Soft-top – for function, window and damage.

7 Oil/water fillers; damp in the boot

Just getting to the engine is a task in itself: most service access is from below. Apart from the bore and Intermediate Shaft issues, a worn cam chain (there’s one at each end of the engine) can cause a rattle at idle – and also needs urgent replacement.  A rebuilt engine costs £5-10,000, compared to £900-1200 to swap the clutch.

Inspect wheels for damage; tyres for uneven wear, age and quality. Brake discs rust and calipers seize if used rarely or left damp; look for wear and grooves, too.

A caring owner will keep coolant/air-con rads in bumper ducts clean and clear of leaves. See that rads are not corroded: they can have a life as short as six years.

Most factory exhausts are worn out. Replacements vary in price and quality, some suffering unpleasant resonance at certain speeds, so try a motorway run.

Bushes, especially rose joints, have a tough time and limited life, so expect to change them every 40,000 miles or so.  Knocking/odd tyre wear are give aways.

Dipstick, oil and water fillers are in boot. check all for signs of oil/water mixing (walk away). Look for signs of a cracked expansion tank leaking water into boot.

Expect a fun drive with sublime handling: anything less means that work is needed. Suspension arm bushes have a limited life – especially the rose joints on the trailing arms. Arms cost c£150 front, £250 rear, plus fitting. Rubber bushes in the lower arms rarely last more than 40,000 miles: new ones are c£250 each. Groaning from the front when manoeuvring is worn suspension top mounts. Check for broken coil springs, too.

A few early engines, up to 2001, suffered casting weaknesses, leading to oil/water mixing. Faulty ones have been replaced or rebuilt by now and an engine overhaul or replacement in the service history need not cause concern.

Intermediate Shaft (IMS) bearing failure can afflict all 986s: driven from the crank, this shaft goes on to drive the cams. Walk away if you can hear knocking or grinding from the back of the engine: a full rebuild is essential. If oil is dripping from the rear but there’s no noise, a gearbox-out bearing replacement should be just in time to avoid a major rebuild. A stronger bearing can be fitted at clutch change time, to prevent trouble later: £900 bearing replacement; £950 for the clutch; and £1100 for a flywheel if required.

Head-gasket failure can be caused by water pump or drive belt failure – if the pump hasn’t been replaced, budget about £700 to do it soon. Hesitation when accelerating indicates a mass air flow sensor problem (c£150), while misfiring is most likely to be a failed coil pack. Frequent oil changes are beneficial for long engine life; a Porsche minor service (c£350) does not include an oil change, but a major one does (c£750).

Even the standard 2.5 Boxster should feel quick, with stupendous road manners. It’s quite happy as a daily driver, and the boot is deceptively roomy.

“I had a Boxster years ago,” recalls Dacosta. “It sparked my interest in Porsches, we joined PCGB and ended up buying a 996. When I sold that, we needed a Porsche to stay in the club, so last year I bought the cheapest roadworthy one I could find!

I’ve spent about £2500 tidying it up and servicing: I’ve had the wheels refurbed, new nuts and centre caps, touched in the stone-chips, replaced the dash air-con unit, the front top suspension mounts and rear arms, water pump, belts, tensioner and coils.

“I was lucky to get a car built to a high spec, with full leather, climate control and big alloys: even the steering wheel is an upgrade. It’s done 108,000 miles and is getting a new exhaust soon, the cheap rear tyres need changing and the window regulator creaks, but otherwise it’s just about there.”

High-revving S2000 was an engineering tour de force and a great driver’s car that’s holding its value well. Rear arch rot can be severe and a full service history is vital when buying.

Against Needs a T-Cut and minor plastics

Martyn Neville likes to have a couple of Boxsters in stock because they’re such good value. This 2.7 has had paint in places, there are light scratches on most panels, the lower front quarter trims are missing and the centre console has wear. Underneath, it appears to be fundamentally sound.

There are five service book stamps, the first three from Porsche Centre Tonbridge, plus bills to show that it’s had remedial work to the roof and windows, which now function perfectly. It had a ‘full service’ earlier this year at 97,387 miles; there’s no invoice, but the oil is still golden, and just over max. Coolant likewise is full and blue.

The doors fit well, the sills are straight and the floors unscuffed. The discs and pads have plenty of life. The newest tyre is a 2014 Continental; they all have lots of tread, bar a 2008 Potenza. The wheels are a bit marked but the rims are unkerbed.

The rear bumper has been painted, the front is lightly grit-blasted and the worst finish is on the rear spoiler, which has a couple of scrapes.

Inside, the dash is good, the leather is creased but not heavily worn, and the centre console is scruffy, with repaired hinges to the storage box lid. It starts easily, the thrum slightly subdued, and drives sweetly, tracking straight hands-off. It has a nice gearchange, decent smooth brakes and the temperature is steady at c80ºC. This must be the cheapest viable 2.7 without serious needs, easily improved after a weekend with T-Cut.

2.7 is tidy bar various blemishes and has MoT to July 2018. Cabin quite smart, with good dash and lightly creased hide. Spacesaver spare is unused and the battery looks recent.

A 986 Boxster is a great and inexpensive way into Porsche ownership: most are dependable, fun and cheap to run, but maintenance costs can hit you if the rare engine issues strike. To minimise the risk, buy one with full (especially recent) service history. The 2.5/2.7 is the most usable; the 3.2 is the most rewarding to drive; look for a high-spec interior.

Boxster was deliberately styled to look like its 996 sibling, sharing its lamps, front wings and bonnet.

Six steps to buying a Porsche 928