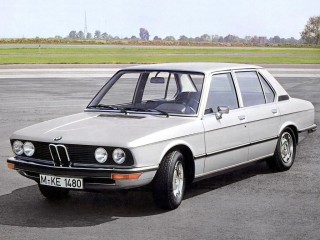 BMW E12 5 Series Trouble-shooter. The E12 5 Series was a great success for BMW but, as Andrew Everett reports, buying and living with one nowadays can be an expensive business.

Launched in 1972 to replace the long-running and successful New Class 1500-2000 saloons, the E12 520 and fuel-injected 520i were a modern take on what had gone before – M10, four-cylinder engines, McPherson struts, ball and roller steering and rear, semi-trailing arms.

What follows is my practical summary of the important things to look out for when buying one of these versatile saloons. Happy hunting!

Unfortunately, anything made from mild steel will rust eventually and, as the oldest E12 is now more than 45 years old (even the newest is 37!), the reality is that you’re not likely to find one that hasn’t seen a welder’s torch or had some new panels fitted.

Sills, jacking points, rear axle beam mounts and rear arches are all weldable repairs, but wings, doors, bonnet and boot are bolt-on. New panels are available, but BMW does know how to charge for them, so don’t buy one that’s really rotten. With the exception of the increasingly desirable M535i model, they’re not yet worth enough to warrant the kind of cost involved in sorting-out badly corroded examples.

With the newest E12 saloon now 37 years old, rust is an inevitable problem to be dealt with.

The E12 made use of various carburettors; some halfdecent but one spectacularly awful! The original 520 used twin Strombergs until 1976, when a single Solex replaced them. Parts for these are now rare.

The 525 and 528 used twin Solex, twin-chokes until 1976, when they were replaced by the Solex 4A1 DVG four-barrel that’s become every mechanic’s nightmare. They suffer from body distortion, blocked jets and faulty solenoids; a truly hateful device that’s best replaced with a Weber.

The E12 made use of various carburettors; some half-decent but one spectacularly awful!

The 520i – until late in 1975 – used virtually the same 130hp engine as the 2002Tii, with Kugelfischer mechanical fuel-injection. This system, when in good order and properly set up, gives great perfomance and economy, but parts for it are pricey now. After that, BMW used Bosch K Jetronic, that’s more economy-orientated.

Sixes used Bosch L Jetronic, a fully-electronic system that worked well at the time, but which now can be a bit flaky. New parts are becoming very hard to find and ECUs are impossible; my advice is to start hunting for, and stocking-up on, used bits now!

Fuel-injection on the E12 started with the Kugelfischer mechanical system, then switched to Bosch K and L Jetronic.

The E12 used twin-circuit brakes and, on LHD cars, there was a single servo and master cylinder unit actuated from the pedal. However, RHD variants had a more complex set-up, featuring dual, remote servos. These can now fail internally and new ones aren’t available.

The cylinder parts can be rebuilt with re-sleeving, but some owners have just replaced both with new Girling servos, as used on the MGB, although different pipe unions are needed.

The LHD E12 used twin-circuit brakes with a single servo and master cylinder unit actuated from the pedal. A more complex system, with dual remote servos, was fitted on RHD models.

Both the M10 fours and M30 sixes were known for cam wear, which generally arose as a result of inadequate maintenance – infrequent oil changes resulting in a blocked oil spray bar.

Regular oil changes as well as ensuring that the spray bar holes remain clear (they can be opened up a bit with a small drill) help, as does fitting the latest type of spray bar banjo bolts, with a slightly coarser thread so they don’t unwind. A top-end rebuild on either engine is now pretty expensive.

Both the M10 fours and M30 sixes were known for cam wear, which generally arose as a result of inadequate maintenance.

A five-speed gearbox was fitted to the 528i as an option, was standard on the M535i, but is rarely found on the 525 model. There are two types of the Getrag 265 unit used, overdrive and Sport. The overdrive unit was used on the 528i, while the Sport version (with close ratios and the ‘dog-leg’ shift pattern) was fitted to all M535i cars. This can also be found as an optional fit on some 528is.

In fact, the overdrive version is far nicer to use, and doesn’t wear out as badly. Most Sport boxes you’ll find nowadays will rattle at idle, and provide a dreadful gearshift – it was never especially good, even when brand new! Replacements are now very expensive to buy used.

The engine cooling system used on the E12 is pretty straightforward and very robust, with very little plastic content. New radiators are available at a cost, but the old-type viscous fan couplings are very pricey – they also tie you in to old-type water pumps that are BMW-only.

In practice, you’re better off buying a good aftermarket, post-1981 pump, and using the later-type viscous coupling with the big 32mm nut, plus a used plastic fan. It’ll cost about £100 in total, and will all work much better.

Because the E12’s production life ended so long ago, BMW can’t keep very much in stock, so locating spares is getting increasingly difficult. Particularly, chrome trim and bumpers are rare and expensive, and new panels are at a premium. However, some bits aren’t such a problem. For example, you’ll find an O/E exhaust is probably cheaper than a stainless steel custom-made replacement. However, interior trim is now all but impossible to buy new.

Sadly, interior trim parts for the E12 are all-but impossible to find these days.

Unfortunately, there aren’t many interchangeable parts that can be fitted from the E28, but a couple of notables are the doors, which can be swapped with very minor work, and the screens, which are identical.

The suspension, steering, brakes and chassis sections used on the two ranges are all different. However, much of the E12’s running gear came from the E3 saloon and, as such, it’s not too hard to find new or good used parts. Brake calipers and suspension legs are often interchangeable, as are differentials.

Doors from the E28 can be fitted to the E12, with only minor alteration.

Sometimes referred to as the ‘M60’ but then renamed M20, this engine was the first, two-litre, straight-six unit to use a belt-rather than a chaindriven camshaft. These earlier units used a cam belt with square-section teeth, later changed (around 1981) to a semi-circular tooth profile to reduce noise.

BMW is now stocking the correct belt again, making it unnecessary to convert to the later type. Cracked cylinder heads were a problem and many cars have had the later ‘731’ E30- and E28-type head fitted, which is a straight swap.

The M60/M20 engine was the first, two-litre, straight-six unit to feature a belt- rather than a chain-driven camshaft.

M30, S52 and other M60 V8 swap this just a simple joke for 2018! Only true electric / Li-ion swap with modern all-electric drivertain for E12, rare E12 in all original condition its ok - but tuning/swap with other modern petrol|diesel engine not god for me!

Jonathan Musk
There are no comments posted here yet