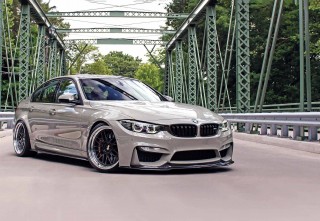 550hp Fashion grey F80 M3. This Fashion grey F80 is a clear exercise in the merits of looking fabulous at all times. You have to remind yourself that there’s a devastating amount of power in there too…Words: Daniel Bevis Photos: Matt Petrie.

There’s more to life than being really, really, ridiculously good-looking. But it’s a strong start, isn’t it? Take this F80 M3 – yes, of course it’s a formidable car under the surface, and it’s been tuned in this instance to be faster, more responsive, louder, better in the curves… but the first thing you notice is the attention to detail, the keenness for aesthetic perfection. While it’s easy for those of us with a slightly sloppy appearance to mock and ridicule the Zoolander types of the world, poking fun at how they’re all surface and hung up on shiny things, the size of the global fashion and cosmetics industries suggests that the joke may well be on us. Taking pride in your appearance isn’t something to tiptoe around. Once you’ve made the decision to be fabulous, every element has to be permanently on fleek. 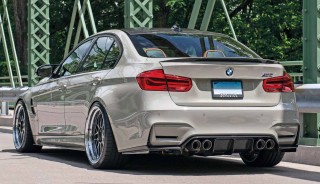 It’s a perilous tightrope though. As Derek Zoolander himself once said, “Just because we have chiselled abs and stunning features, it doesn’t mean that we too can’t not die in a freak gasoline fight accident.” Which makes Anik Patel’s insistence on perfection all the more impressive, given the vibrant swells of high-octane horsepower rippling away under that taut M3 skin.

His acquisition of the F80 actually came about by chance; Anik had previously owned a E92 M3 and was picking something up from a local dealer when a salesman suggested that, since he was there, he might as well have a spin in the new M3. It was love at first sight of course; once the thought occurred, there was no going back. “I took the F80 for a test drive,” says Anik, “and the first thing I noticed was the tremendous torque difference, even with the supercharger on my E92. It seemed like it would make an excellent daily driver; I also wanted a manual gearbox which was a key factor in making the changeover from the E92 to the F80.” Hold up… his E92 was supercharged? It sounds like we’d better delve a little into this guy’s car history, so we can piece together the stepping stones that led to this point.

“I’ve been interested in BMWs since I was a young child,” he explains, “as I used to get dropped off at school in my mum’s E30 325i and my dad had an E32 750i. I’ve always had an affinity for BMWs, as that was the first car that I remember driving around in.” So when Anik reached the legal driving age, he didn’t waste any time in getting behind the wheel of… a VW Golf R32. OK, let’s gloss over that as it takes us all a while to find our feet. The visceral Bavarian thrill came roaring in with gusto when he bought his first Beemer, a 2009 E92 M3. It was the classic used car tale, owned by an older gent who traded it in for a sensible saloon, and Anik was able to make a good deal on a well looked-after car, and inevitably he started modifying it pretty much immediately. It’s just a physical compulsion for people like us, isn’t it? Moton suspension, Akrapovi exhaust, meaty ESS supercharger setup, it was a proper road racer. But once he’d experienced the F80, it became clear that the newer model was in a whole other realm of performance and refinement. And once he’d signed on the dotted line, Anik had a good think about what he wanted to achieve with the car, so that he could be very clear about his goals.

“I wanted to turn it into an excellent daily driver,” he says. “More power, of course, but it was never the plan to make it the most powerful F80 out there – I wanted the best balance of comfort and performance. The goal with the engine modifications was to keep them as simple and bulletproof as possible; to target a good 550hp, so that it was something controllable as well as fun to drive around on the street. With this in mind, I started with the Eventuri intake and Akrapovi cat-back exhaust on the car, with a simple tune. It performed well and I decided that the downpipes and a more aggressive tune would get me to the target without sacrificing daily drivability.”

This is a very mature and considered approach, taking it step-by-step to ensure that the car was as fun to use as it was good to look at, and this is an exceedingly good-looking car.

Anik put in a lot of work finessing his M3’s the looks and the results speak volumes. The paint shade you’re looking at here, appropriately enough, is called Fashion grey and it’s actually a Porsche colour. Interestingly, however, you may have spotted it on one or two other BMWs in far-flung parts of the world because, despite hailing from a separate German stable, Porsche Fashion grey is a colour officially offered under BMW’s celebrated and aspirational Individual scheme. It’s an expensive way to spec a car, but it offers a truly premium and almost Rolls-Royce-like level of bespoke box-ticking.

Anik had observed all of this going on, and decided that Fashion grey was the shade for him. But as he did a little research, he unearthed a minor snag: “The biggest issue that I had concerning the cosmetic changes was that apparently BMW have three different methods for applying the Fashion grey paint, and each one creates a slightly different hue! So I had to take a piece of the car off and send it to the paint shop to ensure that the right shade was being painted onto the car, before fully committing to the change.” It’s this level of care that explains why the car looks so utterly flawless.

This attention to detail has been applied to every single facet of the project. It’s way more than a quick daily driver, it’s a catwalk superstar. Look at the wheels, for instance: “It just had to be on BBS LMs, they’re a timeless wheel that never ages,” he grins. “I had them powder coated in BMW Black Chrome to match the grilles and side blades, to keep the look of the car consistent and fluid.”

On-point aesthetics assured by a careful eye, then, but let’s not forget the notion of the complete package so, with that in mind, Anik took a careful look at the sizeable chunks of horsepower he’d ushered in and decided to adjust his chassis situation to suit. “It was relatively simpler rather than adding unnecessary cost and complexity, because of course I wanted to retain the ride quality,” he reasons, “so I used the KW HAS kit to ensure that I didn’t lose the dynamic damper functionality but still had performance increases.” KW’s Height- Adjustable Spring kit offers adjustable ride height from 5-35mm thanks to the threaded spring perches, while allowing you to retain the functionality of your electronically-adjustable dampers. Nifty.

The brakes are mighty too, being Brembo calipers (painted in a Porsche shade too, Carrera brown) clamping 380mm discs at each corner. With all this going on, it’s hard to pinpoint a favourite element from this superb list of upgrades.

Oh, wait… apparently it’s not hard at all. “I’d say the best modification on the car would have to be the intake and the flash tune together,” reckons Anik, casting a doting eye over his fashion-forward creation. “The induction noise that came out of the results is the most amazing sound that you can imagine!” It’s certainly a robust pairing and helps boost the S55’s already-impressive stock outputs further still. Combining the Eventuri carbon intake with the the Akrapovi exhaust delivers the sort of spectacular soundtrack an M car deserves, with all the drama you could possibly desire.

But, once again, we find ourselves being distracted from the performance by those dazzling looks. Anik saw fit to replace the bonnet with the carbon fibre item from the GTS, along with a front lip and rear diffuser from Vorsteiner which really help to angry up the impression. You’ll also spot carbon fibre side skirt extensions from PSM, and the carbon boot spoiler has been tickled with a Fashion grey stripe. Inside, the car came with Amaro brown leather, and the stunning Sabelt SPS dry carbon seats that were fitted have been freshly-trimmed in the same shade of leather so that it all beautifully matches. Every move a right one, and no stone unturned.

There’s more to come too, naturally. “If they ever release the DampTronics dampers or the KW Variants, I may upgrade to those,” Anik smiles. “And bigger turbos would be nice,” and that’s what this F80 M3 is all about. It’s got the looks but its beauty isn’t just skin deep, there’s a lot more beneath the surface than you might imagine and the end result is a perfect blend of style and substance in equal measure, a heady combination that’s impossible to resist.

“Inside, the car came with Amaro brown leather, and the stunning Sabelt SPS dry carbon seats that were fitted have been freshly-trimmed in the same shade of leather”

“The goal with the engine modifications was to keep them as simple and bulletproof as possible; to target a good 550hp” 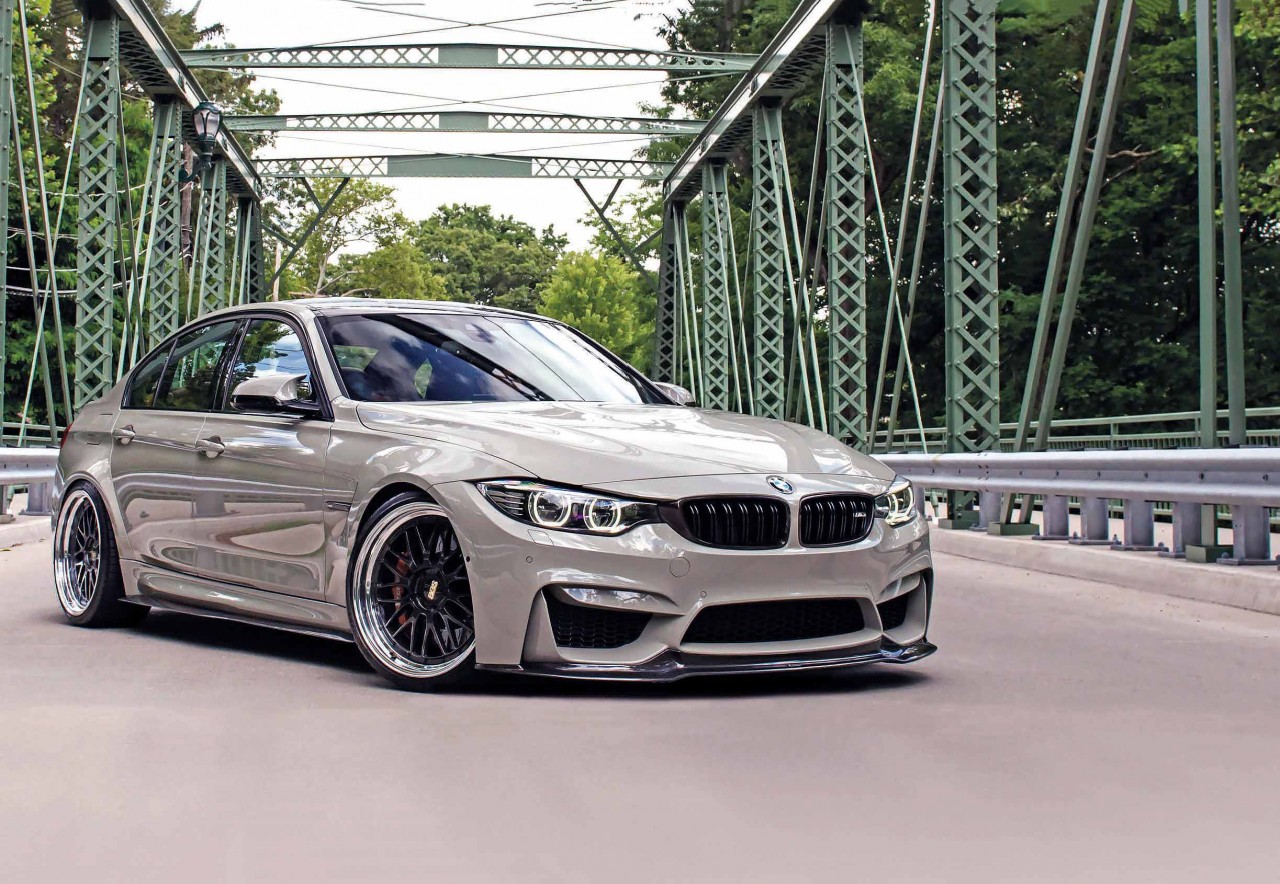 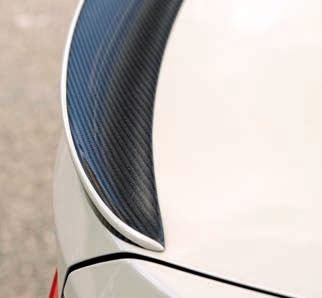 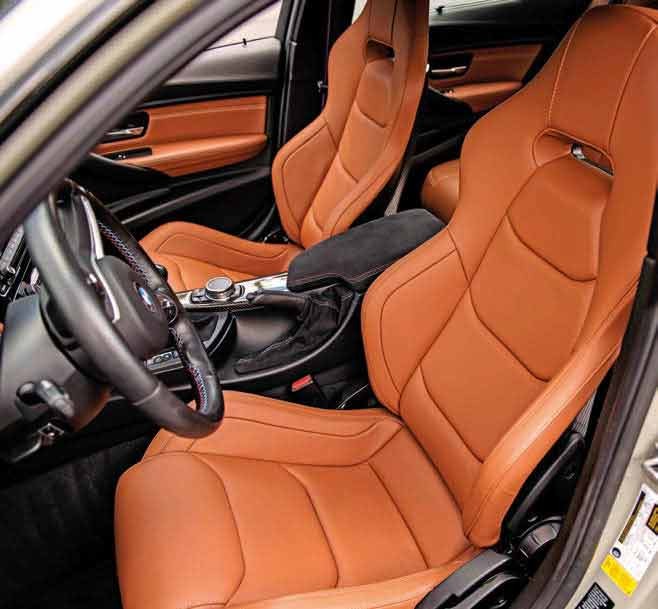 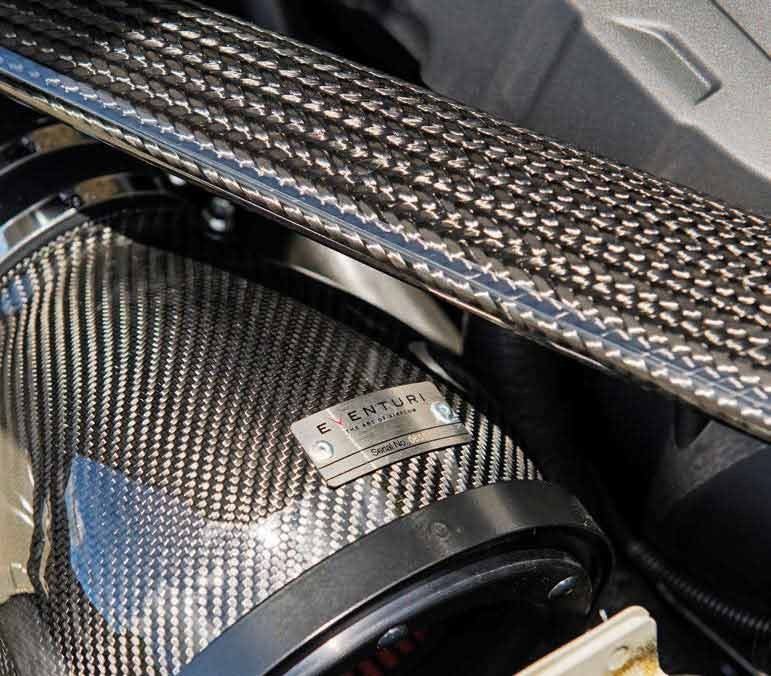 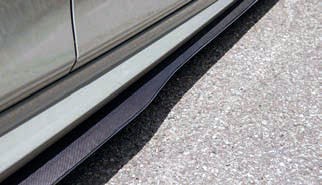 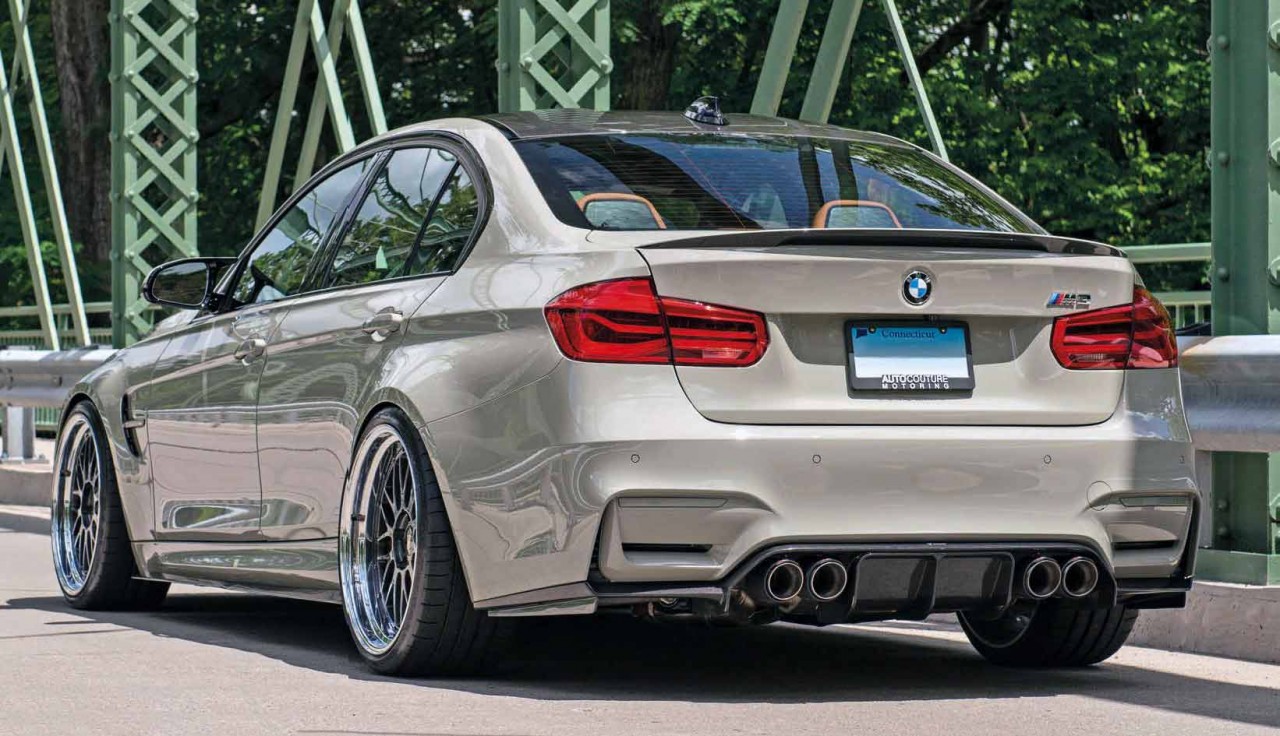 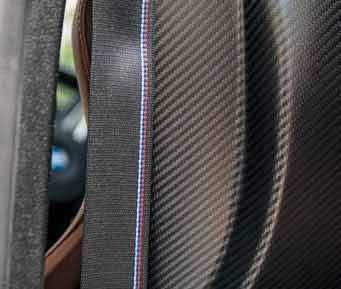 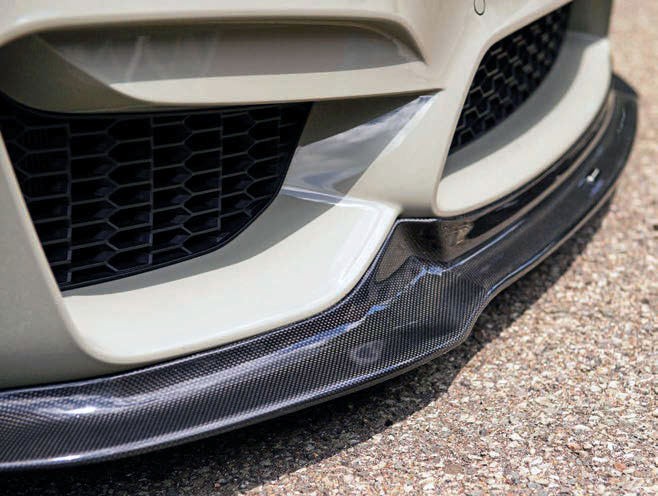 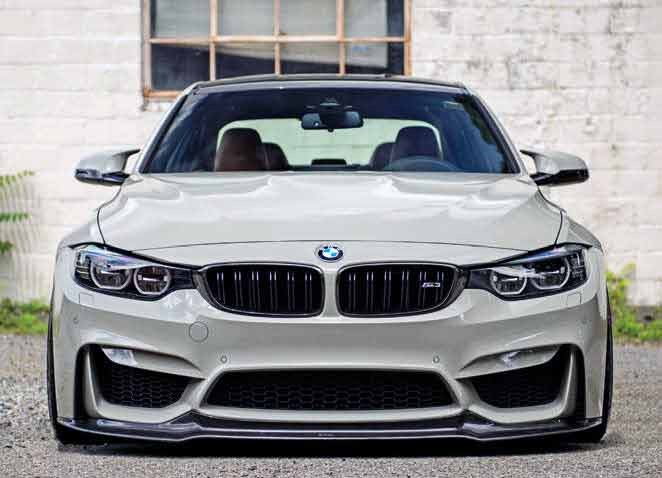 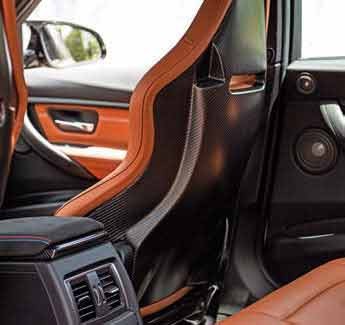