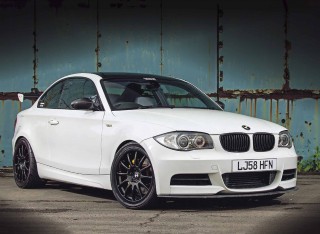 The sleepy town of Pewsey is one of those places where time appears to have stood still. Nestled in the rolling Wiltshire countryside, life here runs at a more sedate pace. But don’t be fooled. Like many of the UK’s smaller towns and villages, look a bit deeper and you’ll often find a lively tuning scene. 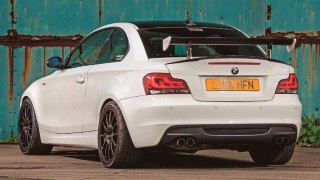 This area is home to RamAir, one of the UK’s fastest-growing air filtration specialists. With a heritage stretching back to 1981, the last five years has seen rapid growth with a new range of performance intakes. Key to this success has been a ‘can-do’ attitude and willingness to help people out with unusual fitments. People like Chris Roberts.

Chris has been a mate of Dan, Chris, Mike and the rest of the RamAir crew for several years and has become their unofficial test driver. “They’ve always helped me out with products and because I’m on track a lot, everything gets a thorough testing!” he smiles. So when he needed help with his latest project, he knew where to turn.

“I’m really into track driving and after my modified Impreza went, I wanted a new toy,” he explains. This 2009 135i certainly ticked all the boxes, with its 306hp twin-turbo N54 and RWD; it’s a fast, well-balanced car and was perfect for what Chris wanted. Having purchased this highly-spec’d example from MCR Specialist Cars (also mates of Chris), he proceeded to drive the nuts off it at every opportunity. “I’ve lost count of the number of laps I’ve done at Castle Combe, but it must be hundreds,” laughs Chris. “I’ve also been to the Nürburgring in it and did loads of laps there – the car didn’t miss a beat.” With so much of its time spent on track, the BM didn’t remain stock for long and the usual upgrades to the suspension and brakes were carried out to make it more capable. “It was a great-handling car, but coming from a much more powerful Impreza, it felt like it needed something extra,” admits Chris. The issue was compounded by the relative heft of the 1 Series, which weighs in at around 1500kg – a fair amount for a small coupé. “I didn’t want to strip it out as it’s a nice car that I also use on the road,” says Chris. So, it was clear that more power was required.

Some research revealed that several single-turbo conversions had been carried out on the twin-turbo N54 engine, mainly in the US. The logic was simple: a large single turbo would be less stressed than highly-worked twins, plus it’s much easier to access. Given that this car is built to drive hard, that’s a big factor. A big-single also comes on boost higher-up the rev range than upgraded twins, which puts less strain on the N54, which can be vulnerable to high levels of low-end torque. And, let’s face it, opening the bonnet to be greeted by a massive turbo is always a winner! With no off-the-shelf single-turbo kits available, Chris turned to local turbo specialists, Davefab. These guys (both called Dave, funnily enough) have made a real name for themselves with their homebrewed turbo setups, most notably on their own Mazda MX-5 demo car. They couldn’t wait to get stuck into the BMW. Clearly a large turbo wasn’t just going to bolt onto the OEM engine, but the team soon realised they could do it without incurring huge expenses. 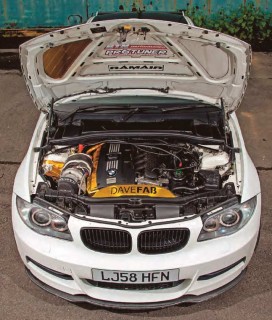 “The plan was to retain the stock manifolds, which would make things a lot easier and cheaper,” says Chris. “We also left the engine stock, as from what we’d gathered the internals could take over 500hp.” The team also knew that they could get it to run via a piggyback ECU setup. All of this meant they wouldn’t have to pay for a built engine, fancy tubular manifolds or standalone management, which would really keep a lid on costs. Even so, a lot of thought had to go into the conversion as the 1 Series’ bay wasn’t designed for a large single-turbo. Several items had to be relocated, including the power steering and header tanks.

Once work had commenced, it quickly progressed, although a tight deadline did lead to an all-night session before the car’s maiden outing. “The PAAA Industry Track Day was fast approaching and RamAir asked me to bring the car along,” says Chris. “So we worked through the night to get the car ready. We finished it and drove straight to Castle Combe.” With some of the biggest industry figures in attendance, the large turbo under the bonnet certainly raised a few eyebrows. “We were only running on low boost at this stage, but even so, it still went really well,” he says. It was clear the big turbo setup worked and offered huge potential once the map had been fine-tuned. Since then a lot more development work has gone into the car and it’s now running around 550hp and 560lb/ft. But with further mapping, Chris is certain there’s more to come.

“The highlight for me so far was at the Spring Action Day, where I was keeping up with £100k+ cars,” laughs Chris. Several surprised owners were quick to check out the BMW back in the paddock and all gave a nod of respect when they saw what was under the bonnet. “That’s what I love about this car,” says Chris, “most people don’t realise it’s so fast. Okay, if you know what you’re looking for you might spot the 255-profile track tyres – which stick out a fair bit and give lots of extra grip – and there’s the rear wing, but it isn’t covered in graphics or stripped out with a cage.”

In fact the wheels were one of the trickiest parts to get right. “I wanted 255s all-round so that if I get a puncture, I only have to carry one spare; I haven’t got room for staggered fitments,” he says. This meant fitting 255s on the front, which the 1 Series was never designed for. “We had to pull out the inner arches and then roll the outer arches to get the Team Dynamics Pro Race wheels with Yokohamas to fit,” says Chris. The arch-rolling technique involved placing several magazines on the tyres, then pushing down on the wings with brute force, until the magazines slipped, allowing some movement. It’s a rather crude way of doing it, but it did the trick and is a neat little hack. 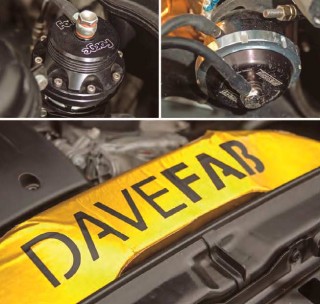 Inside, the stock interior remains, including the leather seats, which offer a surprising amount of support, even when on track. The only giveaway is the iPhone mounted in a cradle on the dash, which shows an array of gauges. “It links to the JB4 ECU and allows me to control the boost, fuelling, check oil temps – you name it,” says Chris. The boot is home to that precious spare – from an M3 – and the water/meth injection tank.

So what’s next for this ballistic BMW? “I’m going to spend the summer on track and represent RamAir at shows and events,” says Chris. “There’s more mapping to come, so it’ll make more power, but to be fair it goes pretty well as it is.” He’s not wrong. As we wrap up the shoot, he asks if we can try a few ‘smoky shots’ and proceeds to nail the throttle and lay down some rubber. As the smoke clears, a smiling Chris gets out of the car and says, “I’ve never done that before; I’m no drifter, but that was fun.” Look out for this ballistic BM at a track near you, soon…

Swindon Karting Arena is one of the South West’s premier indoor kart tracks. Based in an ex-aircraft hanger just outside Swindon, they offer everything from 20 minute sessions for £20, to full-on endurance races, as well as mini moto races. Get in touch with them for parties, events or simply to challenge your mates – www.swindonkarting.co.uk

THANKS Dave Massey and Dave Nicholls at Davefab, Dan Mullan, Chris Yates and the gang at RamAir, Chris Beaven for all his help as without him the car would not have been possible, Paul Kang at BTN turbo, Greg Gush at Protuner, Mike Chalk and the Crew at MCR Specialist Cars, Jamie Williamson at Dick Lovett BMW Hungerford for the OEM parts, all my family for help and support, thanks also to Swindon Karting Arena for the location

As one of the world’s leading filtration specialists, RamAir offer a huge range, with everything from old-school carb kits and panel filters through to full heat-shield induction kits. They also stock a range of universal kits, which are ideal for odd applications or where space is limited as with Chris’ BMW. All products are available for next working day delivery via their website, eBay store or through Amazon. Head to www.ramair-filters.co.uk

“The plan was to retain the stock manifolds, which would make things a lot easier and cheaper. We also left the engine stock, as from what we’d gathered the internals could take over 500hp” 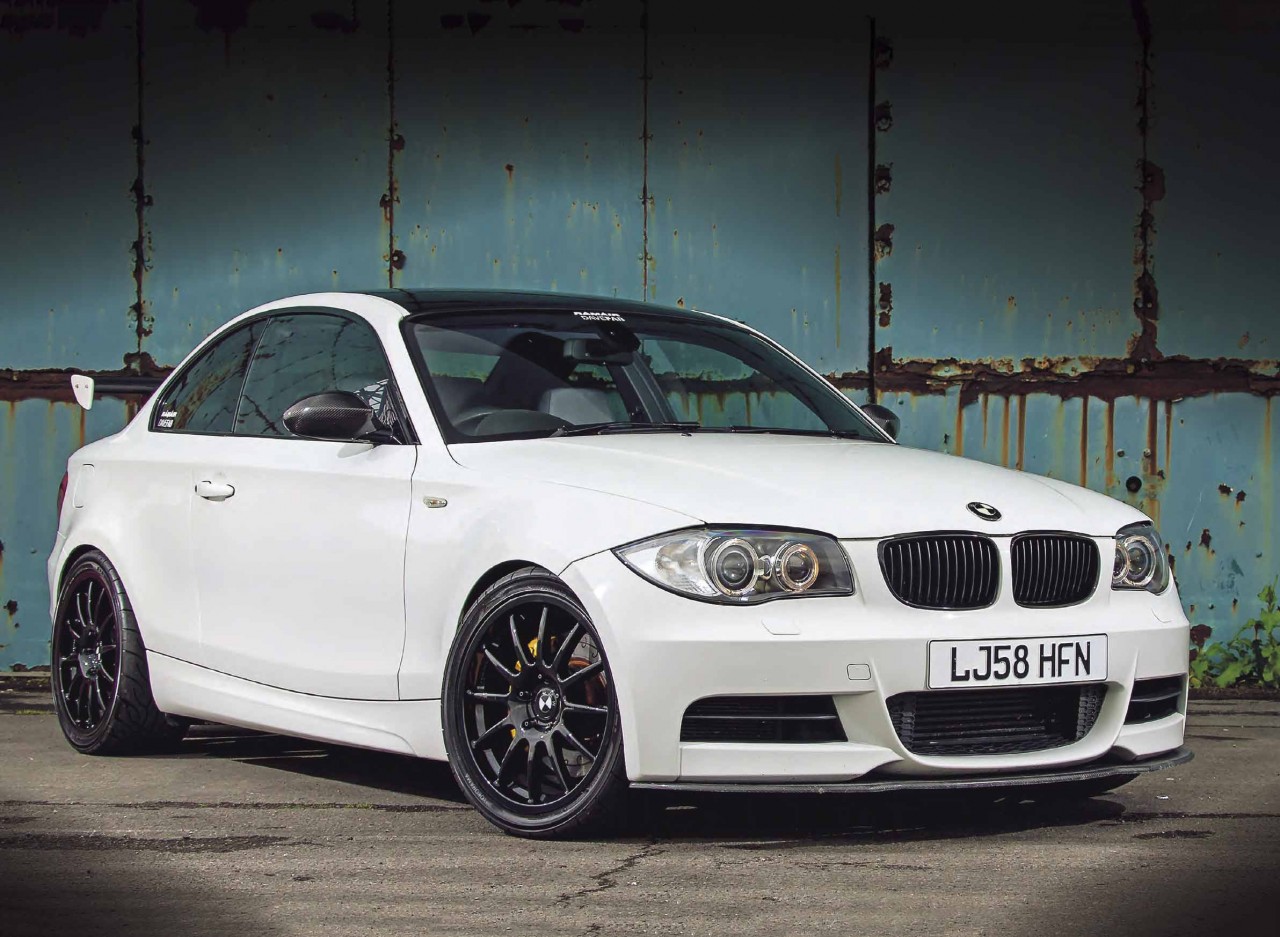 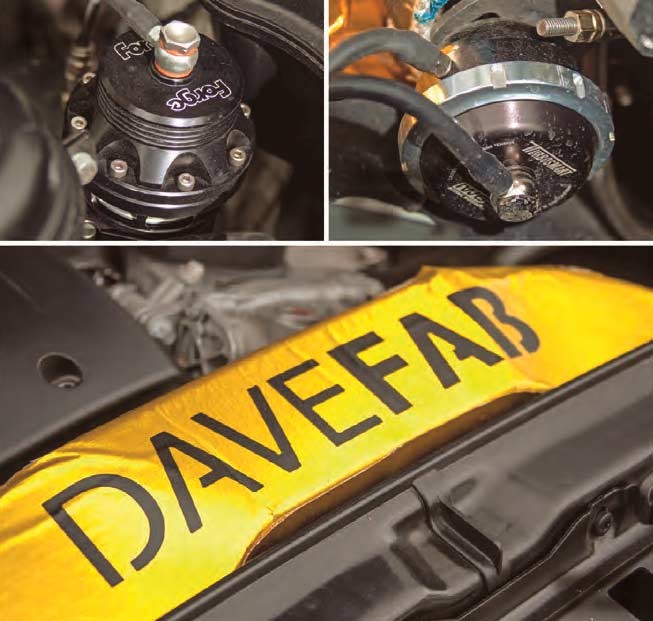 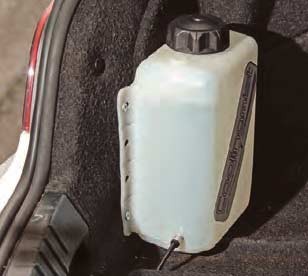 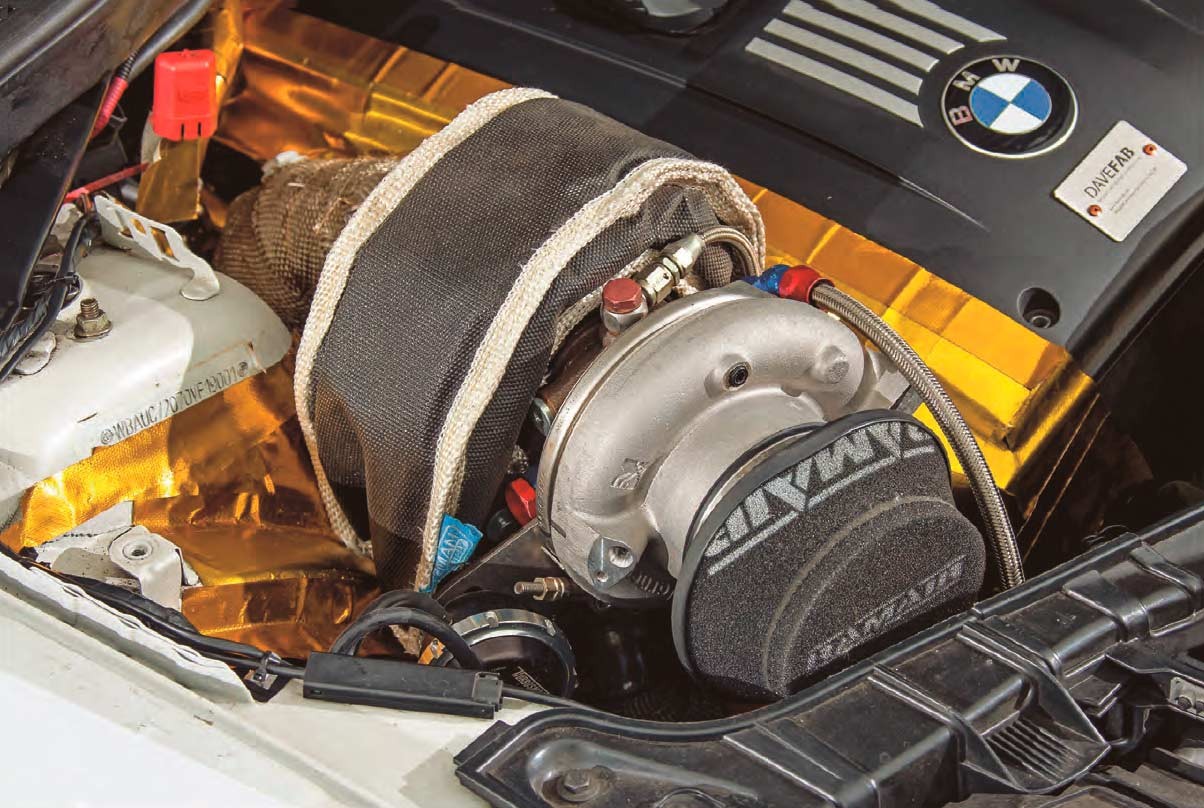 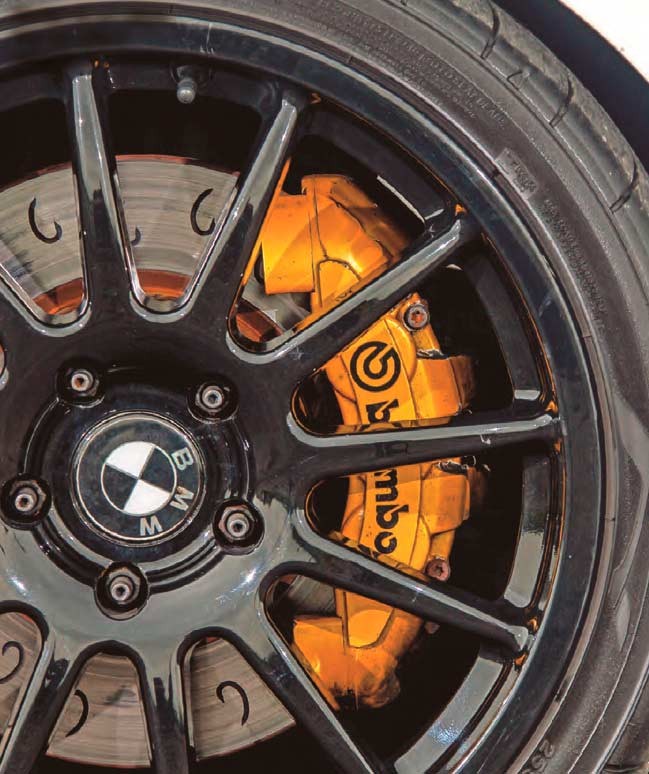 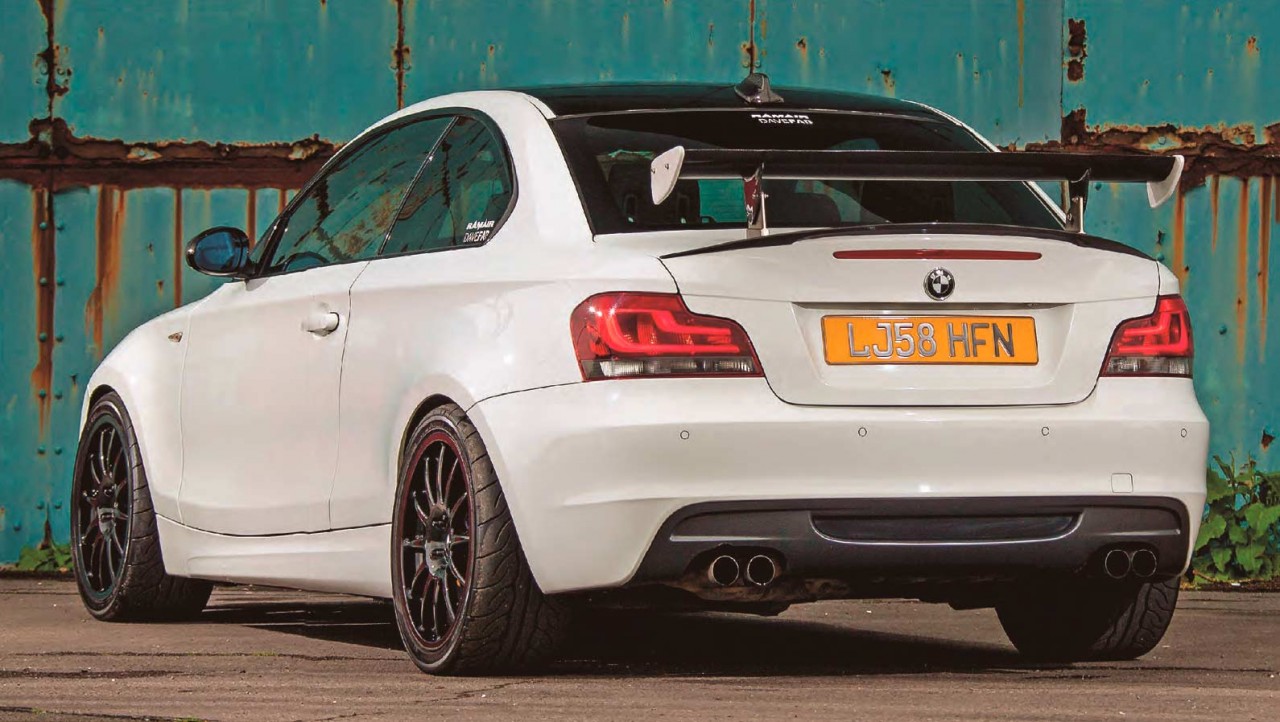 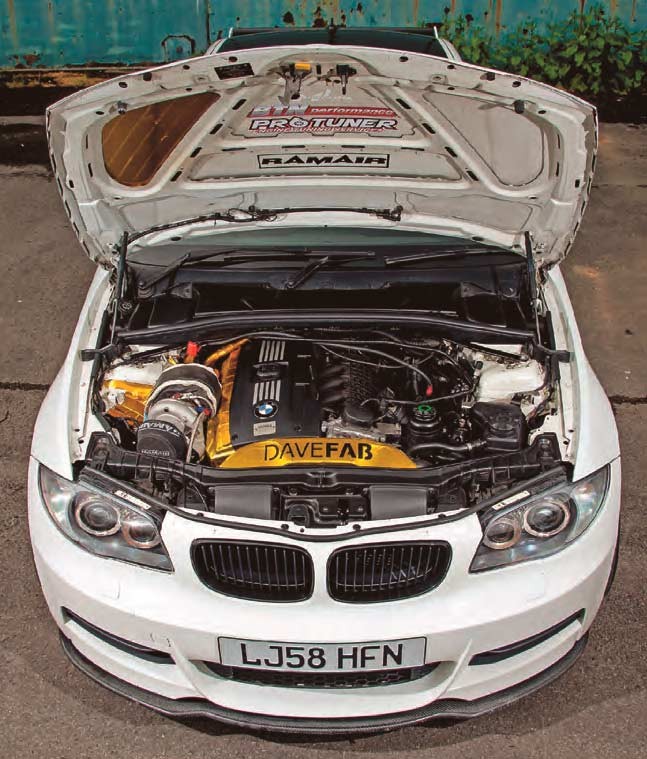