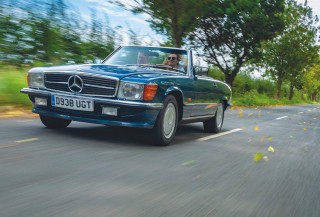 Despite the colourful variety of hot hatches and sporty saloons car manufacturers have laid before us over the years, one body style exudes glamour like no other: the cabriolet. It’s a simple idea which has remained popular throughout automotive history, and it doesn’t take much to bring to mind images of the rich and famous cruising in exotic drop-tops while the vast majority of us pootle around in comparatively drab machinery. Meh! 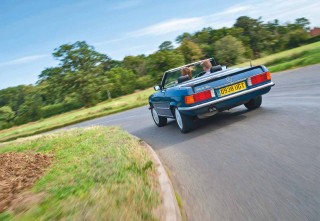 It’s safe to assume a classic Mercedes is what many will visualise when asked to picture a roofless sports car. Moreover, if you’re after a comfortable continent cruiser promising high-speed thrills and reliability, an R107 is likely to be your weapon of choice. And if you’re ‘in for a pound’, then you might as well jump behind the wheel of the V8-powered 500 SL R107.

“To be honest, I was more concerned with overall mechanical and cosmetic condition than choice of engine,” recalls Olly Hackett, the proud owner of the R107 pictured on these pages. “I would have accepted a 280 SL if I’d come across a mint example before seeing the car I ended up with.”

The blue belter he’s in possession of was the fourth and final of its kind to be subjected to his beady eye. “At one point, I entertained the idea of buying a Triumph TR6, but the 500 SL I bought combines serious firepower and classic looks with modern levels of reliability and comfort. Fuel injection and bags of luggage space, plus the availability of rear seats, meant the car ticked every box when I sat down to draw up a list of my requirements from a sports car.

Four owners prior to Olly have taken exceptionally good care of the eight-cylinder stunner. His name appeared on the car’s logbook in early 2017. “I had a few niggles to contend with, including a sticky boot release mechanism, but the car sailed through its MOT, affording me the opportunity to hit the road safe in the knowledge I’d bought a good ‘un!” With 170k miles covered, it’s clear to see he isn’t the only petrolhead to have enjoyed plenty of seat time in the ’1987-plater. Indeed, Olly tells us one of the car’s previous custodians racked up a high number of miles using the car as a daily driver for more than five years, yet the bulletproof nature of the five-litre lump up front, not to mention meticulously observed service and maintenance intervals, means this fantastic 500 SL performs just as well today as it ever did.

Driving al fresco on sunny days is one thing, but most owners of open-topped sports cars dream of enjoying long road trips in their chariot of choice. In truth, few ever get around to setting sail for foreign lands. Enter Olly’s significant other, Lucy Dawson. “We were discussing where to go for our next holiday when I suggested a road trip in the Merc,” says the Suffolk-based artist and textile designer (bellaart.co.uk). This was music to Olly’s ears, and it wasn’t long before the pair were planning a route which would enable them to zig-zag their way through the vineyards of southern France.

After travelling by ferry from Portsmouth to Santander on the north coast of Spain, the intrepid adventurers made their way through the Pyrenees towards Lourdes. “I was really looking forward to what we hoped would be an early highlight of the trip,” smiles Olly. “We were both excited by the promise of dramatic scenery and tight, twisty roads carving their way through the mountains.” The reality of the drive turned out to be quite different. “Thick fog meant we couldn’t see any further than a metre or two in front of the car!” laughs Lucy. “It wasn’t quite the spectacle we were hoping for!”

On they journeyed through wine country, the 500 SL effortlessly munching miles as its occupants enjoyed the delights of roof-down motoring in a Mercedes. “The car didn’t miss a beat,” remembers Olly. “It was great to be able to put its five-litre powerplant to the test, and I was really impressed by how easy we were able to take sharp corners at speed. Best of all, we only had to pull the roof up for two days of the entire three-week trip.”

The R107’s reputation for safe, reliable motoring through quality engineering was clearly proving itself as the car continued in the direction of Normandy. Just as Olly and Lucy were preparing for the final leg of the journey in France before boarding a homebound ferry, however, disaster struck. “We had less than fifty miles of the trip remaining when the car started to lose power uphill,” sighs Olly. “Half a mile later, it conked out completely.” A roadside investigation revealed a dead battery and a suspected failed alternator. Drat!

Being stranded in a foreign country with a broken-down vehicle can be the stuff of nightmares. More than a few motorists are likely to have viewed the incident as enough to have ruined their holiday, but as is always the case when it comes to road trips, advance planning pays dividends. This was certainly true when it came to resurrecting the SL. “Before leaving the UK, we’d taken out European breakdown cover with the RAC,” confirms Lucy. “The company arranged for us to be collected by a local mechanic and his low-loader. We were promptly driven to a workshop in a typically rustic rural French village where the spanner man in question set about repairing the car’s failed alternator.”

Labour costs were covered by the RAC. Thankfully, due to the lack of new parts required, there was no charge to be met by the delayed holidaymakers. Well, unless you count the cost of the impromptu coffees and croissants they gobbled down in a local café while they waited for their Merc to be mended!

“The car performed brilliantly either side of the alternator complaint, and the hassle-free repair work just goes to show how easy it is to work on these cars without attracting significant cost,” muses Olly. In many respects, he views the experience as a positive, highlighting how valuable breakdown cover can be when travelling abroad. “We’d have no hesitation in using the car for another road trip,” he reveals. “It’s just so much fun!”

Since returning home, the beautiful blue Benz has been taken out whenever there’s been warm weather or when Lucy has been exhibiting her wares at summer craft markets in and around North Norfolk. Olly has continued to treat the car in the manner to which it has become accustomed by observing servicing schedules the second they demand attention, although he’s now focused on treating the devastatingly good-looking drop-top to cosmetic work. “I’m probably going to upset some of your readers in saying this,” he says tentatively, “but I’m not a fan of the car’s rear spoiler. I prefer the simpler line of a bare boot lid, which is why I’m planning to remove the spoiler and have the panel painted when the bonnet gets a stone-chip-remedying coat of colour in the coming weeks.”

Since its launch in 1971, the R107’s timeless beauty and range of bombproof six and eight-cylinder engines has made the model a popular choice with those looking to enjoy modern levels of refinement and reliability wrapped in a classic open-topped styling package. In fact, such was the universal appreciation for the R107 during its near two-decade production run, it was the only cabriolet offered by Mercedes! Today, enthusiasm for this modern classic is on the rise, with tidy examples – like the 500 SL presented here – commanding strong money in the showrooms of specialist dealers and on the floor of auction rooms. Our advice is for you to grab an R107 while prices remain reasonable. As Olly and Lucy can attest, for summer fun and sheer class, there are few drop-tops which can offer the same high number of smiles to the mile!

First Mercedes This one!

Best thing about your 500 SL It’s reliable, quick and super-comfortable

Worst thing about your 500 SL It broke down in France!

Bella Art (bellaart.co.uk) was founded by Lucy at her Suffolk studio eight years ago. Specialising in the creation of luxury home accessories featuring designs taken from her original watercolours, her work is heavily influenced by the woodland animals and other wildlife spotted in and around the village she lives in. Proud hares, wild horses, beautiful bees and birds decorate her high-quality cushions, kitchenware, fabrics, lampshades, make-up and wash bags, prints and greetings cards, all proudly made in the UK. Bella Art's product range is constantly expanding, with Lucy's latest designs set to adorn a new line of quality chinaware. 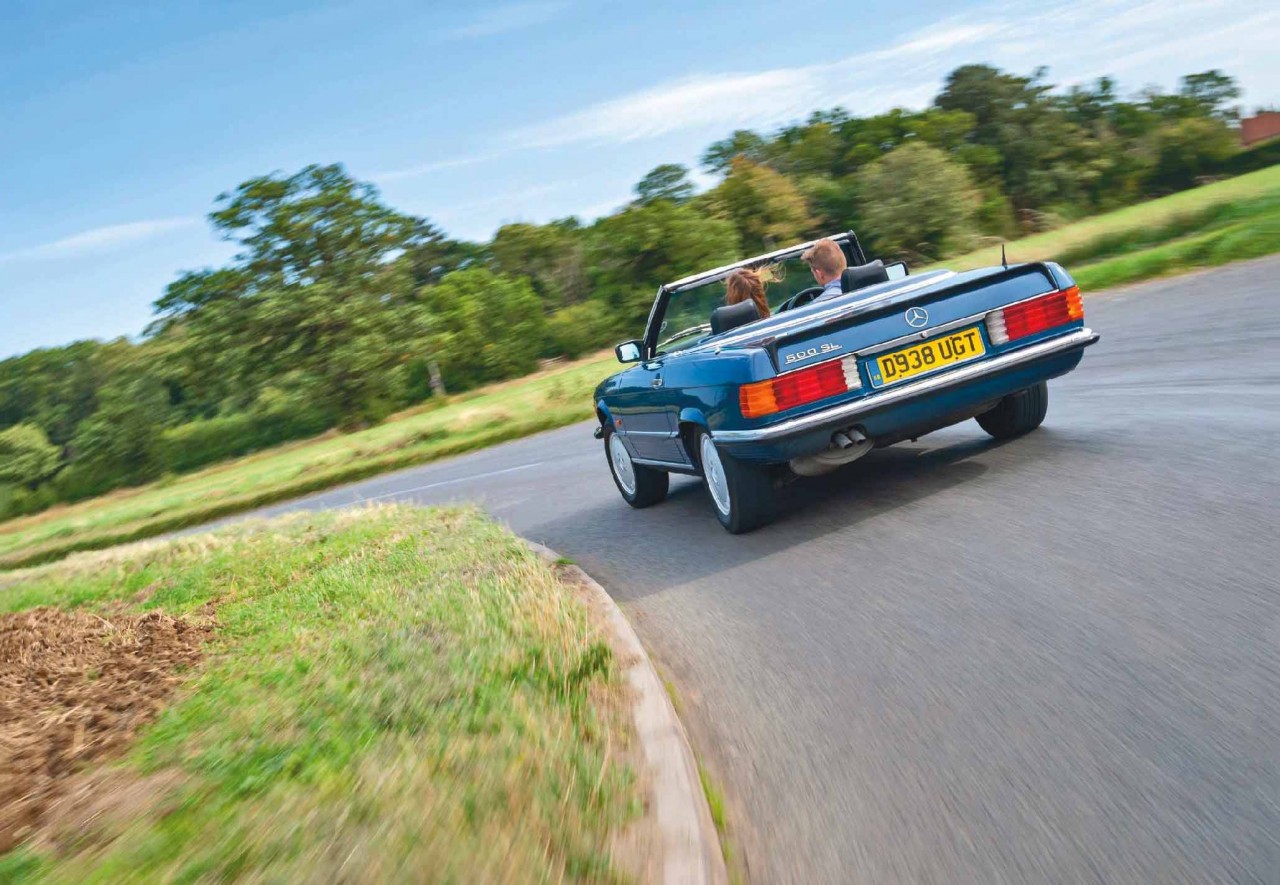 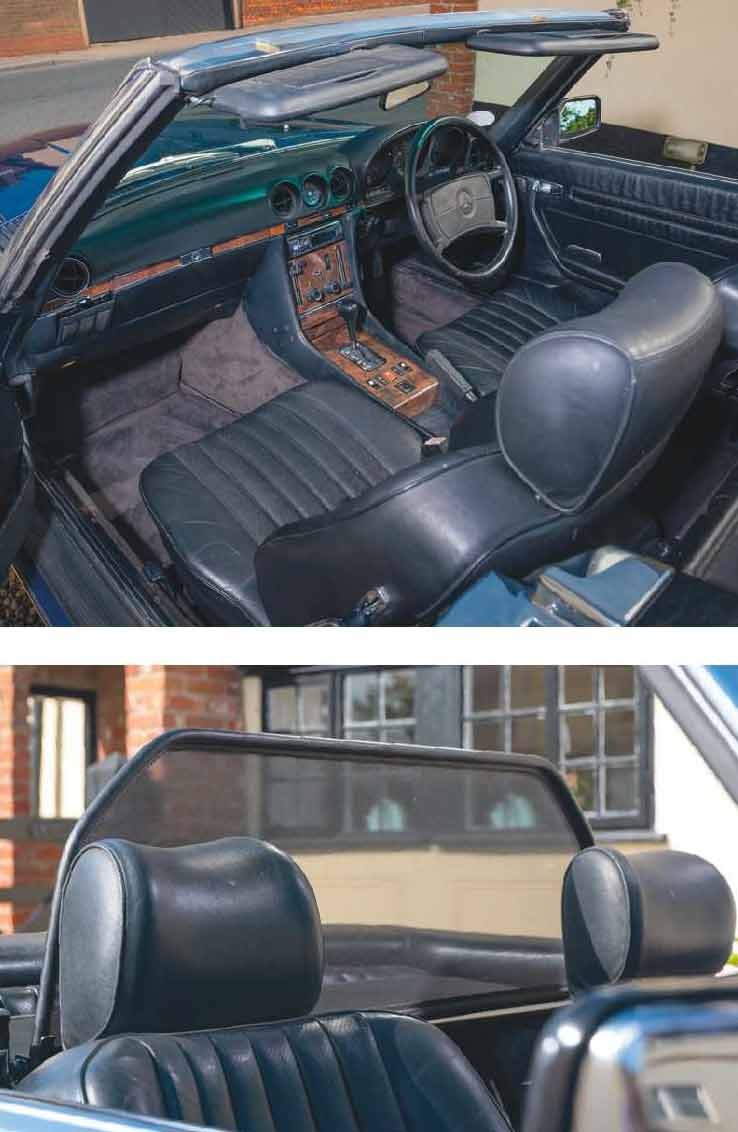 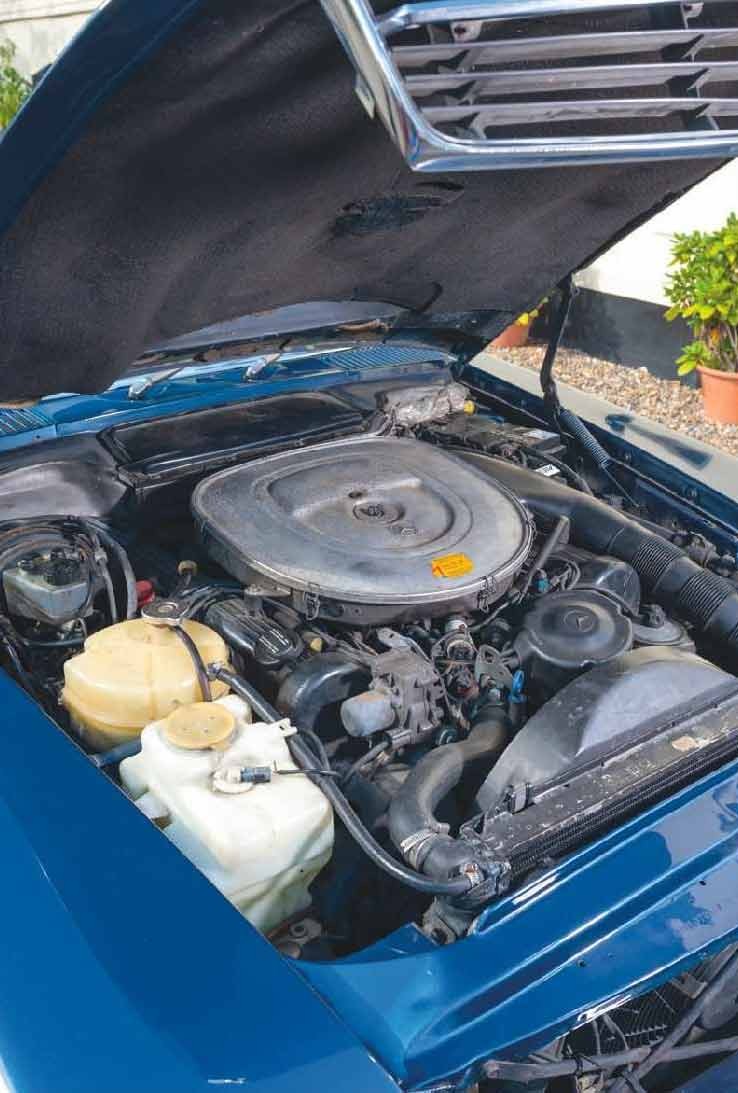 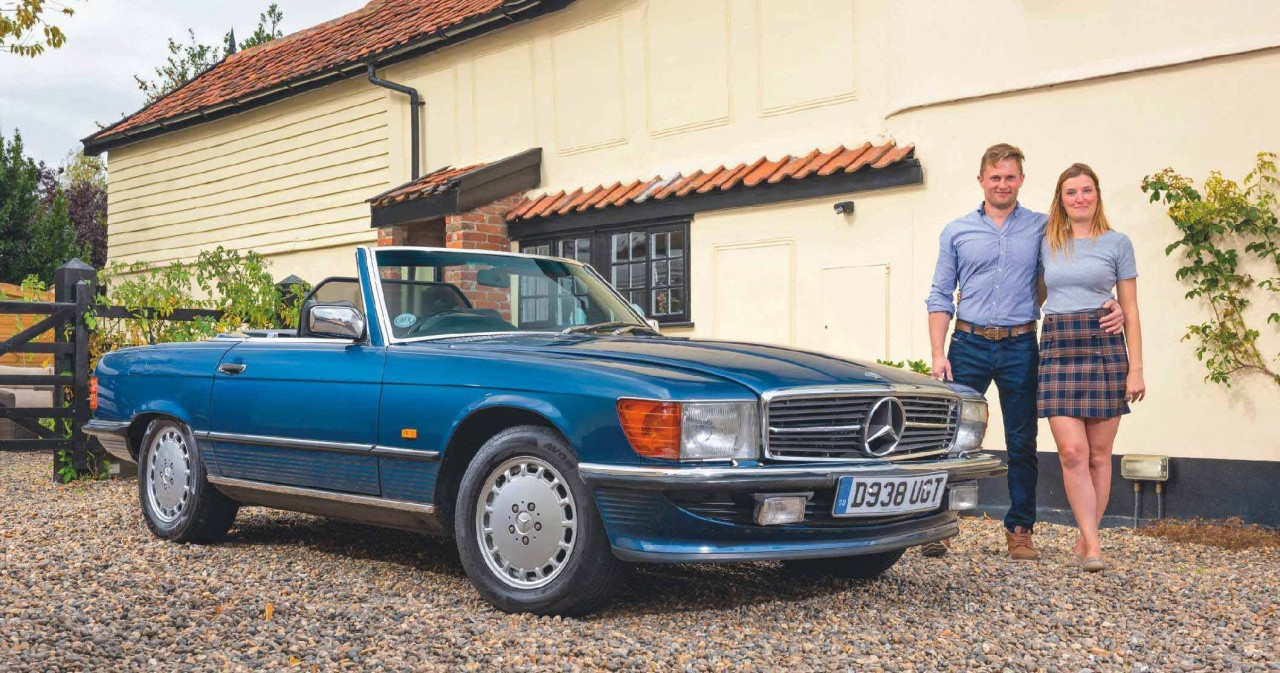 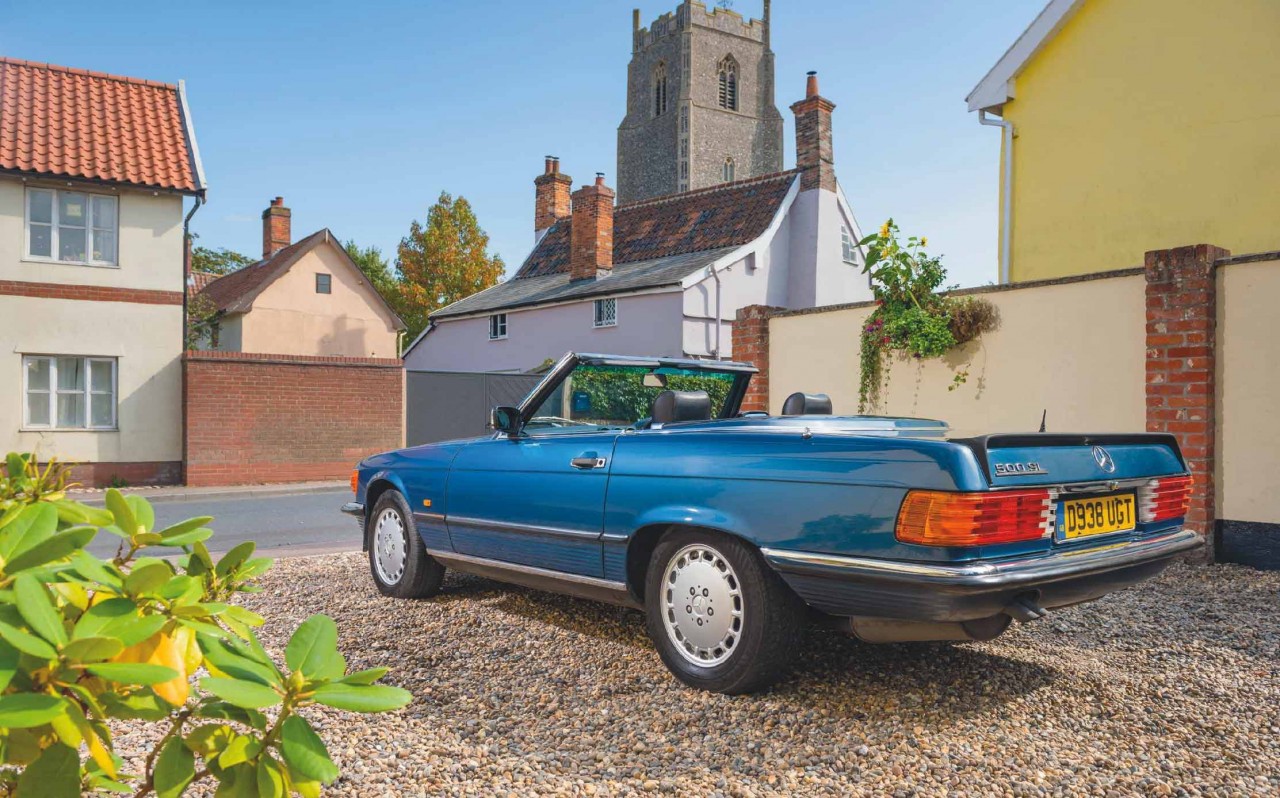 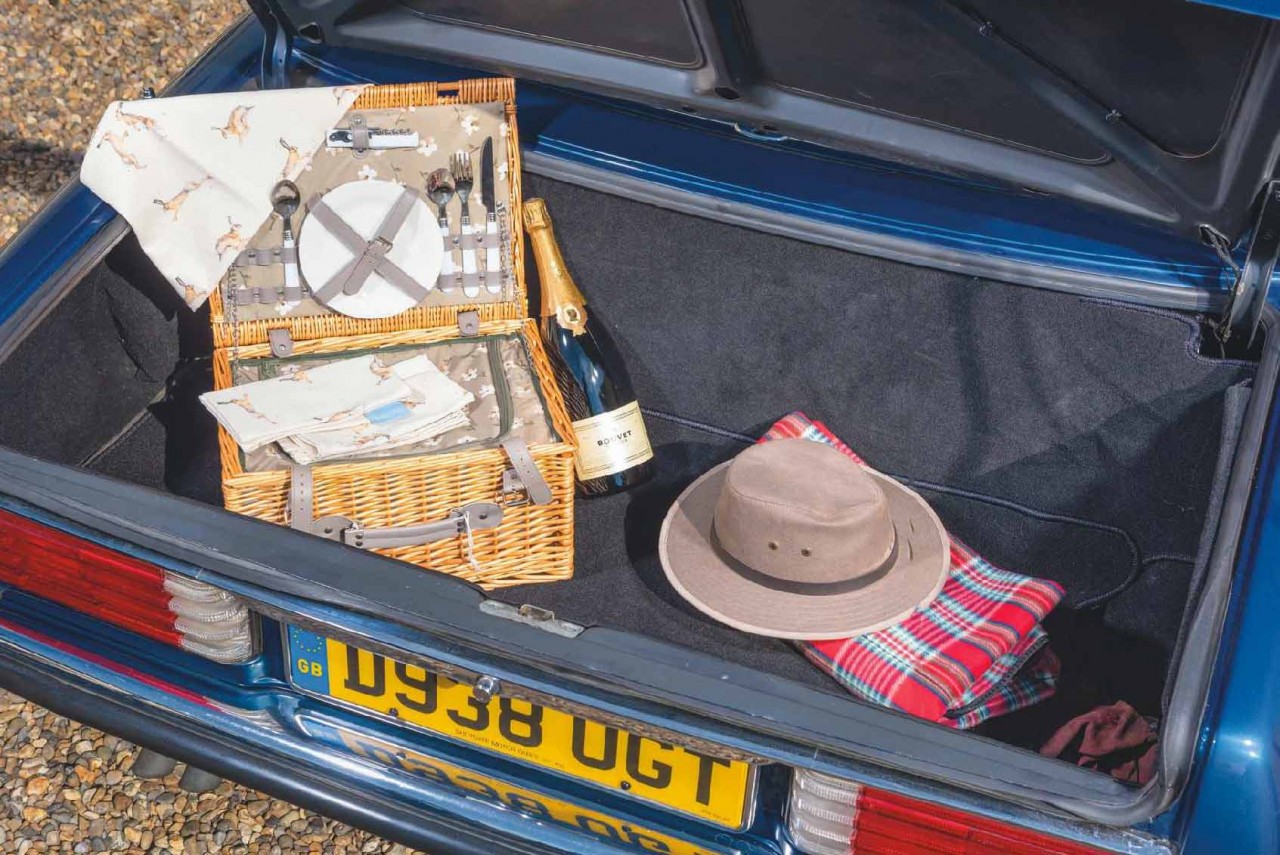 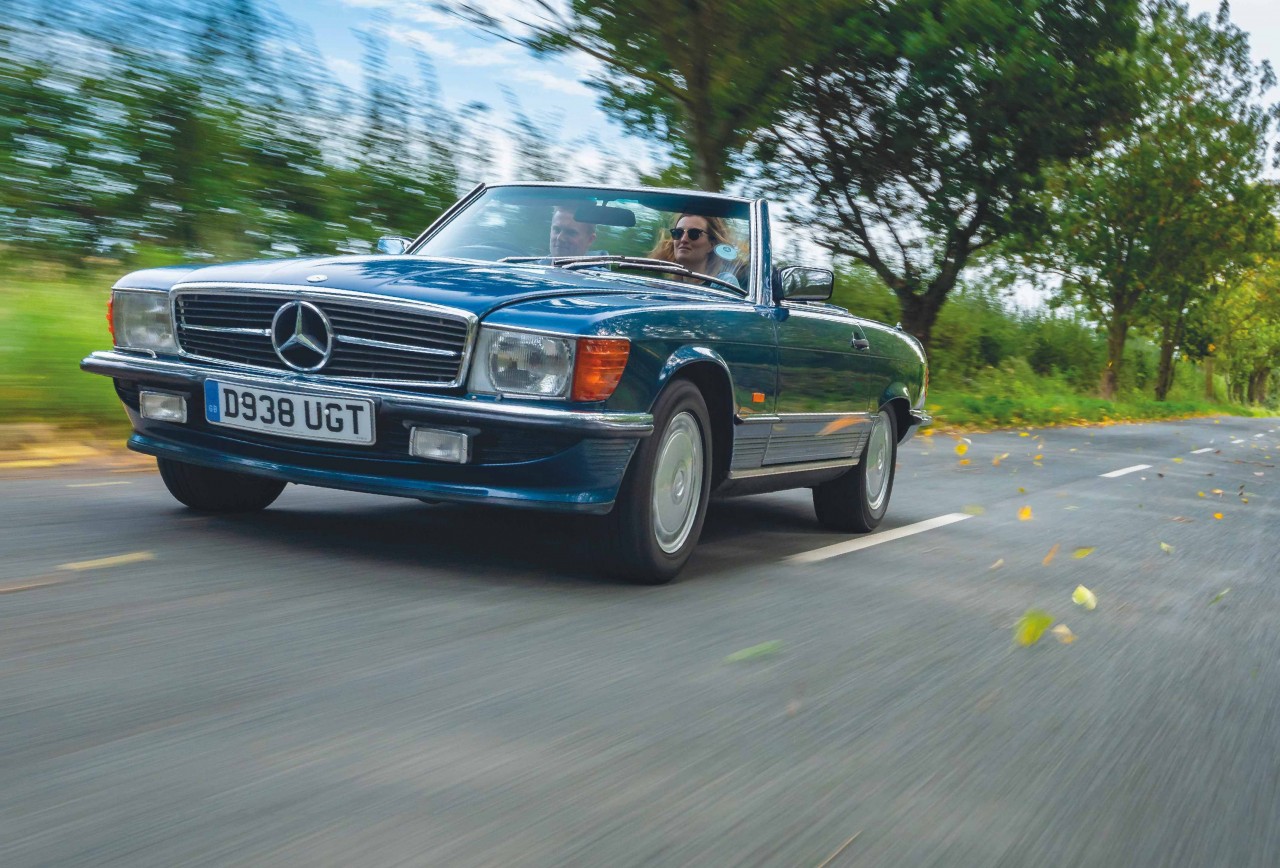 Left Punchy five-litre V8 cruises without complaint, producing close to 240bhp and 296lb/ft torque in stock trim. Above Metallic blue paintwork takes years off the R107 Left There's every chance Olly and Lucy misheard what was being said to them when they were told what they'd need to carry onboard in order to drive legally in mainland Europe! Bottom left Leather has been sat in for more than 170k miles, but remains in fantastic condition thanks to hide balm.